Now, from The Bismarck Tribune --


The Mandan, Hidatsa and Arikara Nation has filed a lawsuit against the U.S. Department of Interior as the tribe continues to challenge oil wells that tribal leaders say were drilled too close to Lake Sakakawea.

The tribe is exhausting its appeals after the Bureau of Land Management approved oil wells that are closer to the lake than tribal regulations allow, MHA Chairman Mark Fox said in an interview on Wednesday.

“We’re doing our best to battle and protect our land and our reservation,” said Fox, who is running for a second term as chairman. “We have a lot to protect.”

Slawson Exploration Co. has completed drilling 12 oil wells near the Van Hook arm of Lake Sakakawea near New Town and has plans to begin hydraulic fracturing on Oct. 1, said Eric Sundberg, the company’s vice president of environmental and regulatory affairs.

From the news story:

Something tells me there have been a lot of surveyors (and others) out in that area stepping off the distance.
Posted by Bruce Oksol at 4:40 PM No comments:

If I had time to read only one Bakken story today, this would be it. A huge thanks to Geoff Simon for spotting it and sending it on.

Link here. Data points:
But, wow, look at this:


Whiting is one of the largest producers in North Dakota's Bakken Shale where it holds more than 400,000 acres. In the company's Hidden Bench play, located in the core of the Bakken in McKenzie County, it has been able to reduce proppant by about 50% and still maintain similar rates of production. It discovered that it could achieve the same production levels on new wells using 7.3 million pounds of sand as it did with 15.2 million pounds.

If the only thing you have is a hammer, everything looks like a nail.

If you "work smart," you may not need a hammer.

This is an incredibly good article. Archived.
Posted by Bruce Oksol at 4:28 PM No comments:

Bakken longevity study: decades to go. If oil prices remain around the $60 per barrel mark, North Dakota can expect drilling activity to continue a few more decades based on today's drilling economics. If you click on this link, a PDF will download on your desktop. The numbers are quite staggering.

Production surge this fall -- Lynn Helms. It's all about natural gas.

Processed gas produced in the Bakken yields a bounty of natural gas liquids, amounting to 400,000 barrels of NGLs per day.

“There's a lot of value in Bakken and Three Forks natural gas -- it's better quality," said ND Pipeline Authority Director Justin Kringstad. "It takes years to develop the system. Investments in technology (over the last several years) are one reason midstream companies are coming on line this year.”

Kringstad said two plants are coming on line in 2018, and four more will be completed next year. And he said "in 2020 we may see more development.”

Department of Mineral Resources Director Lynn Helms said production and processing will continue to grow as obstacles on the Fort Berthold Indian Reservation are solved.

Click here to read about steady rig numbers in US natural gas plays. 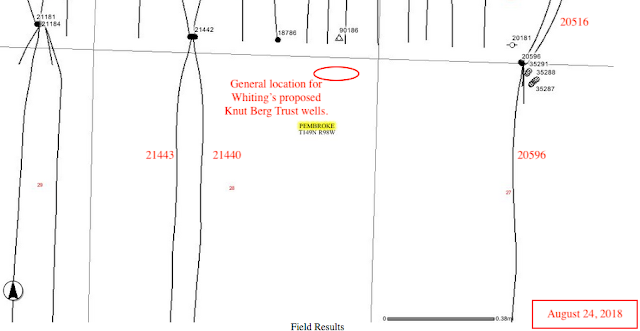 Completed wells of interest in the area:


Oil and gas production is near record levels and the economy is showing impressive strength as well.

Is this the dawn of a new oil boom in North Dakota? Jim Olson set out to find the answer in Williston.  "Things have definitely picked up for us," said John Lisle of S&B Drilling. "In 2015 we had three employees. In 2016 we had 12. And now we're up to 20 employees." It's the same story for Katie Kringen.

"We turn two in the fall and we have 14 therapists here," said Kringen. That's up from 2016 when she started her pediatric therapy office as the only employee.

Airport opening on track, from myndnow:


The new, quarter-billion dollar Willilston Basin International Airport is going to be open by the target date of October 10 of 2019. "It's difficult but we've got a good team and they're making good decisions and we've got good contractors that are working hard out there and we're not going to fail, we're going to get this project done," said Klug. The $230M to $250M project is being paid by federal (50%), state (25%), and local governments (25%).

Based on Thursday's stock closing prices, that values Spectra shares at $40.00 each, or a 5.6% premium. The deal is expected to close in the fourth quarter of 2018.

Now, today same song, different verse: Spectra Energy will buy Bobcat Gas Storage from two partners, including GE Energy Financial Services, for $540 million. In addition to the purchase price, Spectra will invest another $400 - $450 million to fully develop the facility by the end of 2015. The facility with 46 bcf of gas storage capacity is located in southeastern Louisiana.

This will bring Spectra's total storage capacity to about 340 bcf.

MDU's total storage capacity is about 353 bcf. (I do not know if this includes the expansion of the Baker storage facility. I assume it does.)

The market -- some new records will be set today. In early morning trading:

Staggering. On an individual well basis, I don't think the Permian has anything that can compete with the Bakken. Note the EUR type curves at the linked article.

Note to self: memo to Art Berman and Janet Nielson.
Posted by Bruce Oksol at 8:28 AM No comments:

Blinked: China's Unipec to resume US oil purchases after tariff policy changes. LOL. Did anyone think otherwise? From oilprice:

The company had suspended crude oil imports from the United States amid the trade spat between Washington and Beijing in anticipation of crude oil making it onto the tariff list. When this did not happen, Unipec started buying U.S. crude again despite the trade dispute escalation that saw China slap 25-percent tariffs on U.S. oil products and coal.

Peak oil, what peak oil: analyst suggests Alaska's North Slope is an "arrested, late-emerging-phase 'super basin' rather than a mature basin."
NG exports: will triple over the next 12 months (2019). Will account for 10% of US production.

Burnaby update: Canada's Supreme Court rules against Burnaby, for the pipeline. Time to start bringing in the sacred bulldozers.

Saudi Aramco IPO: in case folks have lost the bubble on the IPO -- bottom line, the Prince will shelve the Saudi Aramco IPO and take a stake in Sabic, becoming perhaps the world's largest petrochemical company?

Only one well coming off the confidential list today --
Active rigs:


RBN Energy: northeast gas pulled south by Florida power plants and Sabal trail.
One doesn't have to read much more to see who the winners are, who the losers are. As to paraphrase, the NY governor, NY never was that great. Certainly not when it comes to strategic planning.
Posted by Bruce Oksol at 7:39 AM No comments: