Got lamb? From a reader, we may not have milk, eggs, or bread at our local grocer, but we do have lamb!! Recovers from the Texas Deep Freeze and first thing he does -- gets out the Weber.

How awesome is that? LOL. 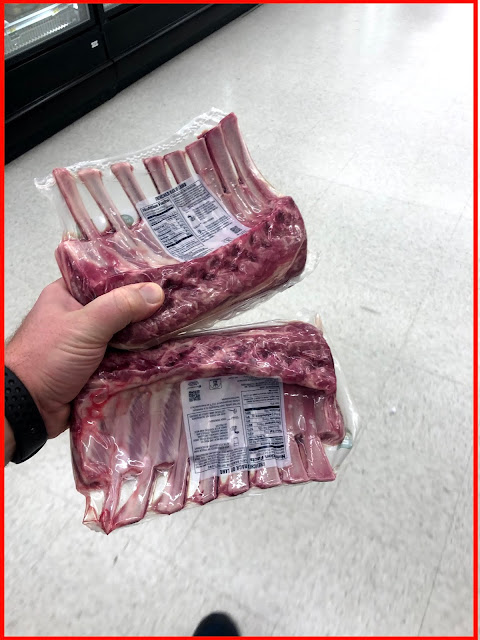 Lamb and beverage of one's choice. What a great country.

Twin Peaks, the television series, premiered April 8, 1990, and was canceled after its second season in 1991. In 1990 - 1991, we were stationed in Bitburg AB, Germany, but something about the series takes me back to a wonderful woman and wonderful memories in Yorkshire, England some fourteen years later.

In Yorkshire, England, I remember running, literally running down the hill to the local grocer on Sunday mornings to pick up the Sunday edition of two London newspapers (The Guardian and The Express (?), some bread, some English bacon, and eggs. And then running back "home" to fix breakfast.

This is just so incredible. It's 2:13 p.m. February 20, 2021, here in DFW, and I'm watching Shelby drive her brand new FedEx Freightliner across Oregon. In a blizzard!!!

SHE's GOING TO NORTH DAKOTA -- see 14:00 in the video clip below. Wow, I love America. North Dakota must truly be a "thing" for every truck driver who has gone across the northern tier.

If we're lucky, maybe we'll see a few scenes of North Dakota -- she will be on US 2 and will end up in Williston! How incredible is that?! I've sent her a note asking her to take video of the Bakken if she ends up in Williston, the first town in North Dakota she will see if she comes in on US Highway 2 -- otherwise, Dickinson, on I-94.

I love it. Link here.

Griddy: a lot of those horror stories regarding utility bills in Texas were from Griddy customers. I mentioned that to a reader. Now I see this over at Twitter:

Texas global warming: best op-ed I've seen on the recent unfavorable event in the deep South. I doubt anyone has read it all the way through.

Tesla: some interesting dots to connect --

Tesla: What to watch: progress on the gigafactory in Austin. This is not rocket science.

Warren Buffett: never bet against Buffett. I find it amazing. How he bought Burlington Northern railroad some years ago and managed to minimize the damage that pipeline would have caused him. He's quite an operator.

You Never Even Called Me By My Name, David Allan Coe
Posted by Bruce Oksol at 1:55 PM No comments:

I spotted a frequently-talked-about-but-seldom-seen Spectrum utility truck in our complex at 12:05 p.m. -- just a bit after noon.

I went to Albertson's, picked up one of the last few cartons of milk (for Sophia) and managed to put together three dozen unbroken eggs after going through five cartons! Whoo-hoo! I even mixed the very expensive brown eggs with the really cheap white eggs and made sure they were all in the white cheap cartons. When I got home, I found several more broken eggs, so Albertson's came out on top, but that's fine. I have about four dozen eggs in the refrigerator now for me and any neighbors that want any. I've sent photos to neighbors if they want any. [By the way, there' s a way to get a dozen eggs for 69 cents at the self-check out. Legally, I might add. That's about as inexpensive as I've seen for eggs. LOL]

But, can you believe that? The storm of the century. A Bloomberg crisis of unheralded proportions and electricity is back on even before the cold weather has completely moved on! And then water was restored within 18 hours or something like that. Minimal water impact and that was cleaned up by professionals in 24 hours. Again, this, a Bloomberg crisis of unheralded proportions; a 100-year storm. I've never seen the roads so busy. People out checking their plants.

And Spectrum is back up! I saw the Spectrum utility truck at 12:05 p.m. -- just a bit after noon -- and when I returned from Albertson's about 12:45 the internet and wi-fi was back up. Just like old friends, my laptop shook hands -- well, maybe a fist / elbow bump -- with the modem, and there you have it.

[It was amazing: it's almost as if Spectrum went one switch box, re-set the circuit breaker, and everything works perfectly. The technology is absolutely amazing.]

A few odds and ends and we're off to the races. I'm not sure I'm in the mood to do much serious blogging, but we'll see.

I'll send a note of "thanks" to Spectrum on Monday. I've already sent a note of thanks to our apartment manager; will follow up in a day or to.

Sophia's school principal sent an e-mail out to all parents updating them on "things." Very, very accommodating. Will allow huge amount of flexibility regarding remote-learning / in-school learning. I've sent her a "thank you" already. I can't believe how responsive this elementary school is. Must be a Texas thing.

By the way, before driving to Albertson's -- remember, it was about 12:05 when I left the apartment -- I noted the donut shop across the street run by a Japanese family that knows about as much English as I know Japanese and who closes every day on the dot at 12:00 noon. But their "open" light was on and, yes, indeed, the door was still open. I remarked on the time, asked why they were still open, I did not understand her answer but I think it was something along the line "we were closed for four days so we need to stay open to catch up." I don't think I've ever heard that from a government employee -- 'cept the military and they are on call 24/7.

So, there you have it. Jalapeno kolaches for lunch and I got enough for our daughter who lives up the street with Sophia, et al.

I can't wait to turn television on to sports talk stations and see the update on Dak. LOL. Now that JJ and his Comstock stock is through the roof, he can afford to pay Dak anything the quarterback with the bad ankle wants. LOL. My hunch: Jerry Jones thinks he's in charge.

Now I know how the Clampetts felt:

One day, no running water, no electricity, no internet ... and the next day? Rodeo Drive!
Posted by Bruce Oksol at 1:03 PM No comments:

I can’t decide whether to stay in bed, warm and comfy, without internet, or walk across the street to our local Internet cafe.

Not much going on. I see Tesla is staying on in California. Questions are being raised whether he can actually afford / complete all his new factories. Recent  cut in prices for some of his models certainly raises questions.

Along that same line: https://www.forbes.com/sites/davidblackmon/2021/02/20/a-dangerous-narrative-emerges-in-the-wake-of-texas-power-blackouts/?sh=17455a2e3ab2.

On another note: I was quite disappointed in Peggy Noonan’s op-ed on Rush. Superficial at best. After Reagan left office, she seems to have rested on laurels as they say. But glad to hear she listened to Rush to the very end. Speaks volumes.

More later but not much blogging until next week.

Every time I hear this song, I find it hard to believe that Brian Wilson adapted a Bahamian folk song. Amazing.