Discussion Continues Regarding Oasis And The Cottonwood Field -- July 5, 2015

The discussion continues regarding the Cottonwood field and Oasis over at the Discussion Group.

Also an update on #20755 -- wondering about a Hess Hawkeye re-frack -- I was probably wrong; reader corrects me. Nice post.
Posted by Bruce Oksol at 10:28 PM No comments:


Greeks voted overwhelmingly "No" on Sunday in a historic bailout referendum, partial results showed, defying warnings from across Europe that rejecting new austerity terms for fresh financial aid would set their country on a path out of the euro.

With nearly a fifth of the votes counted, official figures showed 60.4 percent of Greeks on course to reject a bailout offer from creditors that was the official issue of the ballot. The figures showed the Yes vote drew 40.1 percent. An official projection of the final result is expected at 1800 GMT (1400 EDT).


Don't Let Me Be Misunderstood, Santa Esmeralda
(I initially had another group, a newer version, but this is still the classic.
I had not choice but to return to the Animals.)

This should make it easy for Greece's creditors (EC, ECB, EU, IMF, EIEIO) to decide what to do. Had it been a "yes" vote or even a closer "no" vote, it would have been tough for Ms Merkel et al to say sayonara to Greece, but this vote speaks volumes. The Greeks apparently have a lot of money under their mattresses, have stored up a lot of food, and saw Putin wink.

All they need to do is turn on the drachma printing presses beginning Monday.

Speaking of things I cannot make up:


CALAIS, Maine (AP) — A young man who was drinking and celebrating the Fourth of July tried to launch a firework off the top of his head, fatally injuring himself.

Devon "that was easy" Staples and his friends had been drinking and setting off fireworks Saturday night in the backyard of a friend's home in the small eastern Maine city of Calais, said Stephen McCausland, a spokesman for the state Department of Public Safety. Staples, 22, of Calais, placed a fireworks mortar tube on his head and set it off.

The firework exploded, killing Staples instantly. "That was easy."

His death is the first fireworks fatality in Maine since the state legalized fireworks on Jan. 1, 2012.

I guess it's time Maine goes back to banning fireworks. Or ban the practice of launching fireworks off one's head without a helmet.

By the way, this is where Drudge often fails. Well after the Greek referendum vote story had been posted by most mainstream media outlets, Drudge still had very, very old news "above the fold."
Posted by Bruce Oksol at 11:59 AM No comments:

Monday, July 6, 2015
Sunday, July 5, 2015
Saturday, July 4, 2015
Friday, July 3, 2015
Unless there are a lot of producing wells completed in tomorrow's daily activity report, I don't see how the operators are making any headway on that list of wells waiting to be fracked; the most recent report suggested upwards of 950 wells in the Bakken waiting to be fracked. Of the 17 Bakken wells in the list above, it appears five will be reported as completed.

Speaking of which, Greece that is. How is the referendum vote going? According to the World Clock, it's almost 6:00 p.m. in Athens. Certainly the polls are coming to a close. No exit polls? Where's Christiane Amanpour? For that matter, where's John Kerry?

As the New York Times sees it -- a day of reckoning:


No matter which way the Greek vote goes, the European Central Bank on Monday will face a series of agonizing decisions. Greece’s future in the eurozone may well depend on how far the central bank is willing to go to prop up struggling Greek banks and prevent a total economic collapse.

If Greeks vote yes — agreeing to accept unpopular dictates from other eurozone nations and international creditors in return for more aid — the central bank would have a much easier time justifying emergency loans and other steps to keep the banks from failing. No economy can function properly without banks; if they topple, so will the economy.

But if Greeks vote no, Mario Draghi, the president of the E.C.B., may be confronted with a difficult choice. The central bank’s rules would probably require it to stop providing cash to Greek banks. But Mr. Draghi might be tempted to find a way around those rules, because choking off financial support would thrust untold hardship upon ordinary Greeks and might send the country on its way out of the euro currency union.


A major pilot project by Europe's largest power network operator to integrate power from rooftop solar panels into the grid has shown that battery storage of renewable energy is not yet economically viable in Europe.

The conclusion is a sobering one for proponents of sun and wind energy because as more of it comes on tap, better storage will be needed to keep the power produced when it is sunny and windy so it can be used at other times.

The 30 million euro "Nice Grid" pilot is one of the biggest in a European Union-backed "Grid4EU" scheme in which France's EDF, Italy's Enel, Spain's Iberdrola Czech Republic's CEZ, Sweden's Vattenfall and Germany's RWE are testing the power grids of tomorrow.

That was pretty well known (or at least predicted) by anyone following the battery story. What surprises me is that Reuters would post the story without more spin.

Though batteries are not yet viable in Europe, they will continue to pursue this route, because Europe, like Minnesota, doesn't mind spending money if it makes them feel good.
This is a wake-up call for the US. I wonder if the California rate changes are a response to what the state is seeing developing in Europe as more and more folks place solar panels on their roofs.

I will agree with four of those, maybe five. And as Jack Nicholson famously said, two out of three ain't bad.

Speaking of cheese, I see Fidel Castro -- yes, that Fidel -- recently visited cheese-making facilities in Cuba. I can't make this stuff up.

The United States has its Al Jazerra.

Texas has its Los Angeles Times.

North Dakota has its StarTribune.

And, Williston has its Dickinson Press. This is really good news. Although it's hard to say, it appears the new Williston waste treatment plant is coming along ahead of schedule. Had the state of North Dakota released the money a bit sooner, the project would have been complete by now. But regardless, with workers working from 3:00 a.m. to 9:00 p.m. seven days a week, the project appears to be on schedule, and could open, at least partially up to a year early. What fascinates me is that the water treatment plant is being built to handle a city of 60,000, and expandable to 100,000.

With regard to the possibility of coming on-line a year earlier, I'm reminded of other big projects, like the "Big Dig" in Boston that was delayed by a decade and is still an issue decades later. And North Dakota weather -- nine months of the year -- isn't exactly conducive for huge outdoor projects that require a lot of cement. Yes, I'm pretty impressed by this project.

The bad news: had the state released the money earlier, and had the plant come on line sooner, perhaps those two fish in the year-old photograph (actually it's more than a year old) would not have died. Well, of course, these two fish would have died sooner or later, but perhaps not in that exact location.

The reason I said Texas has its Los Angeles Times is because of the amount of space the newspaper seems to devote to Texas. I kind of forget about the LA Times until I make my annual pilgrimage to the Golden State.

By the way, the LA Times is more left-leaning, more slanted than the New York Times. It makes the NYT look like a Rush Limbaugh publication. Okay, not that bad. But the Los Angeles Times certainly has an interesting perspective on economic issues. Perhaps that's why no one is seen reading it here at the Starbucks I visit almost every day. In Boston, everybody seemed to read the Boston Globe.

In addition to businesses moving from California to Texas, it appears sports stars are doing the same thing. This was the headline story in the sports section yesterday: the Los Angeles Clippers and their fans have been dealt a  huge blog. Their franchise player has fled the state to join the Dallas Mavericks. From another source:  How Do L.A. Clippers Survive Losing DeAndre Jordan to Dallas Mavericks? My brother-in-law disagrees with me and he is probably correct, but I will suggest that state income taxes played at least some role in the decision. The state income tax on annual income exceeding $1 million is over 13%. Jordan was offered a 5-year, $109 million package.

Even I can do the math.

This was a topic at our Fourth of July party last night. I was unaware of the story. From The Los Angeles Times:


A month after toy lovers got word that FAO Schwarz would be closing its famous toy store here — yes, the same store where actors Tom Hanks and Robert Loggia played "Chopsticks" on the giant floor piano in the movie "Big" — came word that Apple would move into the vacated palace of childhood dreams.

The Apple move will be temporary while its own lavish store next door on Fifth Avenue undergoes renovation, a spokeswoman said last month. The FAO Schwarz closure, though, is permanent, illustrating how New York City real estate prices bend for no one, not even the country's oldest and most beloved toy store.

With that in mind, the costumed toy soldiers stationed outside FAO Schwarz's front doors have been especially busy lately, greeting locals lamenting that they waited so long to visit and tourists grateful that they got here before July 15. That is the day the giant piano will fall silent, the thousands of stuffed animals will cease to gaze upon wide-eyed shoppers, and the swaddled baby dolls will be removed from their glass cases and packed into boxes.

"It's the day when childhood ends," Judith Chapman said wistfully as she stood on the busy plaza outside the main entrance after ducking inside briefly to pick up some candy for herself. Chapman, who lives in New York, remembered visiting FAO Schwarz as a child, back when she found the realistic baby dolls under glass more cute than creepy, and when you didn't risk public shaming by following a visit to the toy store with a ride on a horse-drawn carriage in nearby Central Park.

Our California friends spent the last few weeks in NYC taking care of their grandson and helping the family move back to California now that their son-in-law has completed his "training" there. They said that they enjoyed getting the opportunity to visit FAO Schwarz before it closed.

The short-sightedness of some civic leaders never fails to amaze me.

For those interested in the cyclone winds in the western Pacific, this dynamic link.

I don't follow the Chinese stock market as a rule, and I certainly don't understand it. But to help me put it in perspective: 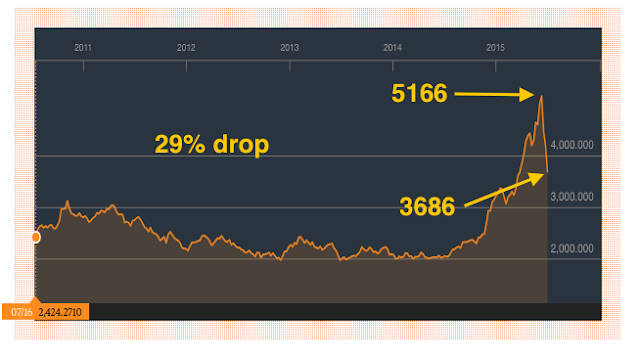 Disclaimer: I often make simple arithmetic errors. To determine percent decline: (Peak - Trough)/Peak in percentage.
Posted by Bruce Oksol at 9:27 AM No comments: