The wells look great, the water-cut is high. It looks like the new normal will have to be piping waste water directly to SWD wells to save on operation costs.

It is also very impressive that they are getting well costs into the $4.3 to 5.0 million cost range.

I think the next step change will be someone thinking outside the box, larger well bores (circumference). The two latest things I have heard is a change in chemicals in the frac mix, and real time use of data.

Anyways, If the costs get much lower then many second and third tier resources will one day be first tier resources. Let the good times roll.

Both neighboring wells are back on status:

Weekly API crude oil inventory report:
WTI: up another 48 cents; back to nearly $54.

I never watch political debates. I might tune in at the beginning to just see the spectacle, but I don't hang around long enough to actually hear a question in its entirety or an answer in its entirety.

Tonight, I tuned in to see the candidates walk on stage, and listen intermittently to the first-question sequence. I had dropped Olivia off at soccer practice and was watching on Spectrum TV on the laptop in McDonald's. I saw part of one short response from Mike Bloomberg. I then moved on to something else.

But, having just seen that one segment, my thought: Bloomberg did very, very poorly.

After bringing Olivia home, I rushed home to see cable network analysis, and check out the voting on Drudge. Interestingly, the first thing I heard: a) Bloomberg really did very, very badly; and, b) Biden did surprisingly well.

I didn't hear a thing from Biden (or most of the others) so I can't comment on them, but Bloomberg seemed awful. And that's what cable network talking heads said.


"If you like the DMV, you are going to love Medicare-for-all."

And even earlier, from the Las Vegas Review Journal (I don't expect this to come up during tonight's debate):


Do readers remember the Crescent Dunes solar power plant in Tonopah? The project commenced some 10 years ago and was financed in part with a $737 million federal loan guarantee.

Nevada Energy fully supported the project, promising to buy power at a rate almost six times as high as the market at the time. At the same time, the company was destroying Nevada’s residential solar businesses by pushing through a measure to reduce the “buyback” of energy generated by households to less than one-sixth of the going rate.

How is the Crescent Dunes doing? It ceased operations in April. The three-quarters of a billion dollars of federal guaranteed loans have been eaten by us taxpayers, and the Department of Energy is trying to decide what to do with this albatross.

The "boondoggle" served its purpose: slush fund for funneling money (political donations from CEO, board members) to political parties and candidates -- don't cry for me, Argentina).

How many remember that genius, Steven Chu?


Energy Secretary Steven Chu said the department has completed a $737 million loan guarantee to Tonopah Solar Energy for a 110 megawatt solar tower on federal land near Tonopah, Nev., and a $337 million guarantee for Mesquite Solar 1 to develop a 150 megawatt solar plant near Phoenix.

The two projects will create about 52 permanent jobs, Chu said.

I can't make this stuff up: more than $1 billion in guaranteed loans for 52 permanent jobs.

Part of the $800 billion stimulus program that President Obama now says is responsible for the Trump economy.

$737 million loan guarantee. 52 permanent jobs. Permanent if "permanent" is defined as less than a decade. 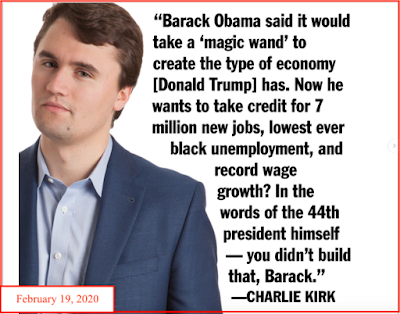 Links and story everywhere. This is one. Color me amazed. Absolutely amazed. And so thankful.


Multi-functional room in small apartment.
Posted by Bruce Oksol at 1:10 PM No comments:

Wow, what a great day. Sense and sensibility returning to the market. Headline: NASDAQ has record open as cases of coronavirus slow down.

Tesla: anyone invested in the market should give a "shout-out" to Tesla and Elon Musk.


Without question, what is driving the market right now: FOMO (fear of missing out).

The economic numbers, the interest rates, the jobless numbers, US govt bonds, the headlines (global anxieties) have not changed over the past year -- what we see "today" we have been seeing for the past year, and yet the market is on a tear.

Even with coronavirus, the US market remains robust.

The only thing left to explain this market is FOMO.

And what is the poster child for FOMO? Tesla.

And it's "dragging" every other MAGA stock along (Microsoft, Apple, Google, and Amazon) and they in turn are "dragging" along all the rest.

There are a few hiccups, but even Boeing investors are in FOMO, and yet the writing on the wall suggests the 737 MAX debacle is far from over.

Spectrum television: I used to complain about the high cost of cable. And I still do. But, wow, what "bang for the buck." I have "Spectrum TV" wherever I have an internet connection and with wi-fi, awesome.

McDonald's gift card: I'm lovin' it. Morning coffee at Starbucks, as much as $7.50 if I get something to eat along with coffee; and refills, 50 cents. At McDonald's never more than $2.25 and that includes "senior coffee" at 69 cents with free refills. Plenty of seating at McDonald's; not so at Starbucks, any more. More homeless folks at our local Starbucks than at our local McDonald's.

Chicago. See this note, "doomsday chronicles: Chicago re-visited." The internet is wonderful. One can find the government data and do one's own comparison. I"m not convinced that Chicago is in as bad a shape as folks make it out to be over at sites such as Zero Hedge. Much of it is perception. More on that later.

Procreate application for the iPad. I've been talking about that recently. It is awesome. Sophia loves it and I just came up with a new use for it. Can't wait to try it out with Sophia. This is really, really "crude," not ready for prime time, but it gives one an idea of what one can do with Procreate:


In addition to being really, really cool, Sophia loves the Procreate app, so she will love doing arithmetic on it. And one can do a thousand "sheets" of arithmetic and she can do them whenever / wherever she wants, including during the drive to school. Yes, I know there are "arithmetic apps" out there, but she loves Procreate; might as well take advantage of it.

US home construction: dipped 3.6% in January. Follows the December surge.

Love him, hate him, he doesn't hold back.


Most presidents sign their pardons/commutations in the dead of night, just before they leave office, and no announcement. Trump: in the middle of the campaign season, on the tarmac, extemporaneously in answer to a reporter's question. Press can't get enough of him. Again, showed real compassion. The press did not report the pardons/commutations of (was it?) eleven women. He specifically asked for his team to find more women that needed to be considered. Of course, that seems sexist. Their families won't mind. These eleven women were completely unknown to 99.99% of Americans (and the press).  No political gain for doing this; simply the right thing. Complete list here.

Bloomberg: African-American and Latino young males can't find jobs because they don't know how to apply; how to conform to the white man's workplace. And so it goes. He will lose Virginia on his gun stance. Wow, huge digression. Sorry.

Link here for great graphic. Yes, it's from 2016, but these things don't change much over a couple of years and we'll show more recent data later. "Tax collections by state, per capita, state and local" ranking: 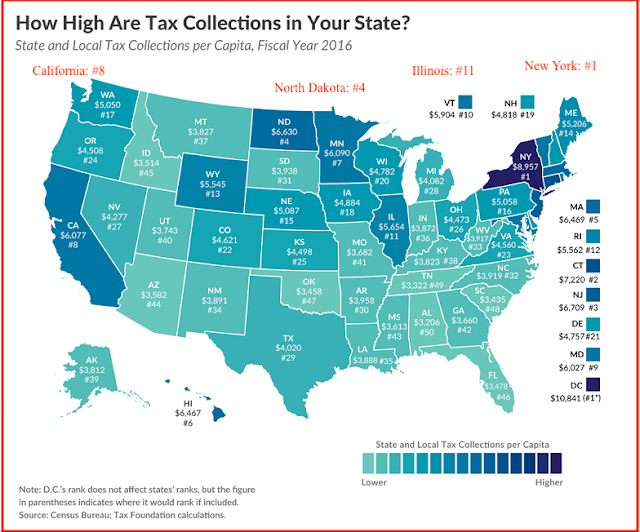 As promised, more recent figures. From 2018. But only the state tax revenue per capita. This list does not include local taxes -- see above. As noted, things don't change much, over a couple of years. In the list above, North Dakota ranked near the top (#4) with highest state/local taxes. In the 2018, ranking, North Dakota was #1 (the list includes DC, which I have removed):


I paid ND taxes when I was assigned to Grand Forks AFB, after I moved from California. Once in the military, if serving overseas, one can "choose" state of residence based on very, very "loose" criteria. I chose California as my state of residence: California was one state that had no state income tax for military members serving outside of California. I did everything I could to prevent re-assignment to California on my return to the states.

I have lived in/visited almost every state in the union (including Hawaii/Alaska) and I have never noted much difference in the quality of life in high-tax states vs low-tax states. In fact, Texas, a low-tax state has perhaps the best highway system in the country, its public schools are incredible; its state colleges and universities consistently rank high in the nation; retail and residential communities are first-rate. And generally, no shoveling snow in the winter.

Disclaimer: in a long note like this there will be typographical and content errors. I may have misread the graphics.
Posted by Bruce Oksol at 10:01 AM No comments: 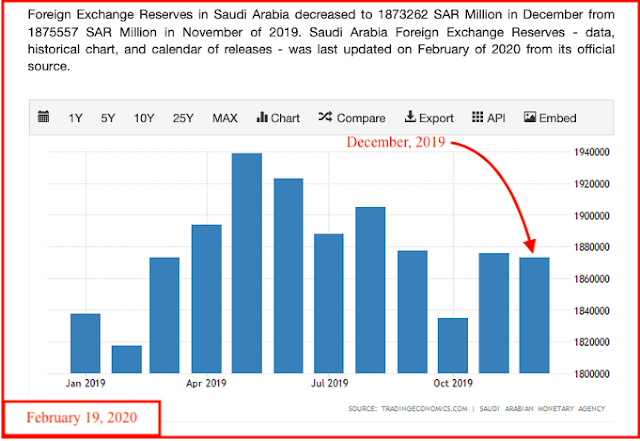 US crude oil imports: from all sources, a 13% drop year-over-year, November, in thousand bbls/month crude oil:

US crude oil imports: from Saudi Arabia (remember, SA has a huge refinery in the US): a 65% decrease, year-over-year, November, in thousands of bopd. To put this "352,000 bopd" in perspective, the Bakken is producing 1.5 million bopd and unfettered, the Bakken would produce upwards of 2.0 million bopd:

If I did the math correctly, the US imported about 8 million bopd in November, 2020. Of that 352,000 bopd came from Saudi Arabia. Most of it, I assume, was shipped to California.


The developer of two grassroots U.S. oil refineries reported late last week that it has formally completed and adopted a stringent program for identifying, evaluating and managing environmental and social risks tied to the projects. Meridian Energy Group, Inc., which plans to build new refineries in the Bakken Shale formation and the Permian Basin, stated that its new Environmental and Social Management Plan (ESMP) aligns with the Equator Principles – a risk management framework embraced by 101 financial institutions in 38 countries.


Natural gas supplies in Western Canada fell into a hole in 2019, registering their first decline in a half-dozen years. That drop was led by a supply pullback on TC Energy’s Nova Gas Transmission Limited (NGTL) system, the largest gas pipeline network in the region, as producers grappled with widespread pipeline maintenance, shrinking budgets, and wellhead shut-ins due to ultra-low prices, especially during the summer months. That supply hole is going to be fixed in the months ahead, thanks to a major pipeline expansion — the North Montney Mainline — that recently entered service with a direct connection into the NGTL system. With this new pipeline tapping deeper into the vast Montney formation in northeastern British Columbia, gas supplies are showing signs of pushing higher, and more upside is expected in the months ahead. Today, we examine the new pipe and what it means for gas supplies on NGTL.