The New York Times reports the population of North America to be in the billions.

Link here.
Posted by Bruce Oksol at 9:54 AM No comments:

Time to take a look at market cap for some E & P companies (rounded):
Disclaimer: there are likely to be factual and/or typographical errors on this page. If this is important to you, go to the source.

I've been in a Chris Isaak mood all week. That mood may continue for another week.


You Owe Me Some Kind Of Love, Chris Isaak

The music caught my attention:
The producer of that album:


Erik Jacobsen (born May 19, 1940) is an American record producer, song publisher and artist manager. He is best known for his work in the 1960s with Tim Hardin, The Lovin' Spoonful, The Charlatans, Sopwith Camel, and later with Norman Greenbaum and Chris Isaak. Though semi-retired, Jacobsen continues to manage many of his published songs and masters for various uses.

April 20, 2019: could this be the next high-profile Permian takeover? From the linked article, the "takeout case for Apache":


Apache's stock popped nicely on the CVX/APC news, as did many shale players, but fell back a bit as the day wore on. I read nothing into that event.

Alpine High is a massive block of about 300K contiguous acres that has been estimated to contain 3 bn BBOE.

As you can see from the slides [at the linked site], the Alpine High development is skewed to Wet Gas. Wet gas is basically the heavier end of the hydrocarbon molecule with more carbons attached, making them heavier, and tending toward a liquid phase. Dry gas is defined as being 85% methane or better.

One of the things that makes the Permian so prolific is the thickness of hydrocarbon column, up to 6,000'. There are multiple pay horizons, with names like Bone Springs, Wolfcamp, Barnett, and Woodford. Apache has already identified over 5,000 drilling locations across this acreage, with about 75% of them targeting wet gas.  One of the things that's been a drag on Apache's stock was the limited take-off capacity for dry gas. Once Kinder Morgan's, Gulf Coast Express-GCX, line goes into service, later this year, those concerns go away. Apache was one of original subscribers to the GCX, 500 MMCF/D guaranteed take-off.

Cryogenic capacity is the next piece of the puzzle. To turn wet gas into dry gas the heavy ends are first concentrated and removed from the gas stream cryogenically. These units will come on stream this year. The billion or so dollars of capex that's been required to process wet gas has also been a drag on the stock. The market gives you nothing for investing for the future, it's only interested in what's happening now to produce profits.

Disclaimer: this is not an investment site. Do not make any investment, financial, job, travel, or relationship decisions based on what you read here or think you may have read here.
Posted by Bruce Oksol at 7:27 AM No comments:

April 20, 2019: could this be the next high-profile Permian takeover? From the linked article:


Oil equities are under-valued at present by thirty or forty percent, taking the recent performance of the XOP index as an example, in relation to the price of oil. From the Dec. 24th, 2018 low, the XOP has regained about 30% of its pre-crash level, while oil has nearly doubled. Anadarko makes up about 2% of the XOP.

I posted this earlier, but am now looking at this article again with respect to these paragraphs:


We have been inundated with theories about shale peak-ing out in recent times. You've may have read them... the ones by Martenson and Berman stand out in particular. In this one, and in others very cogent arguments have been made, that growth trajectory of shale plays is in decline due to poorer rock quality than in the past. Some, like Jim Chanos posit a very dark interpretation of shale results so far, that's it all been a hoax. The words "Ponzi Scheme" are used frequently by the doom sayers.

It is not my intention to challenge any of these pundits squarely today. They may very well be right, time will tell. What I do want to address in this article is an element of market activity being ignored by the "doom crowd." The clever arguments put forward for shale slipping (crashing?) into decline, have managed to ignore one simple fact.
The shale-doom crowd chooses to ignore the obvious, and frankly, the most compelling pro-argument for shale that exists. Big Oil is committing resources to shale in droves.

Companies are falling over each other in the attempt to land big "Shale" fish, like Anadarko. And, in so doing have laid out ambitious growth plans for this resource. BP, (BP), ExxonMobil, (XOM), and now Chevron. What are they telling us by voting for shale with their capex dollars?

It's simple really. They are saying that their geophysical teams-which, let's acknowledge are the best in the business, have told them that with scale, they can wring more oil and gas for less money than any other equivalent investment.

What scale brings is a low base cost of production, which when combined with the high technology these companies can bring to bear on a project, turns into profits and free cash flow.

Here is what, Michael Wirth the chairman, of what many people regard as the smartest, best run oil operator in the business- Chevron, said regarding this transaction in a recent interview:


"This deal enables us to compete in any oil price environment, produce synergies from the combination of the two companies, and be accretive to earnings in the first year."

This is a great, great example of a story with no context, no analysis. From USA Today, "counties where the American dream may already be dead."

Disclaimer: in a long list like this there will be typographical and factual errors. If this information is important to you, go to the source.

Fifty counties across the US were cited as poverty-stricken.
The two counties in North Dakota are pretty much federal plantations. I can't speak for the other counties and parishes on the list but I bet much of the same. It is interesting that not one county in the former "Indian Territory" made the list.

Earlier this week, we spotted a brand new bright yellow BMW i3.

Re-charging: one hour for 23 miles.


From wiki: Present performance cars are capable of going from 0 to 60 mph in under 6 seconds, while exotic cars can do 0 to 60 mph in between 3 and 4 seconds, whereas motorcycles have been able to achieve these figures with sub-500cc since the 1990s.

The fastest automobile in 2015 was the Porsche 918 Spyder, which is a hybrid vehicle taking 2.2 seconds to accelerate from 0 to 60 mph.

Some car manufacturers and magazines in the United States use a "1 feet (sic) rollout", which means that the timer is only started once the car has traveled 11.5 inches, reducing the measured time by up to 0.3 second.

From Bloomberg: a $255 billion EV debate is raging among the world's biggest automakers.


A $255 billion debate is raging among the world’s biggest automakers. Some think electric cars made by companies besides Tesla Inc. stand the chance to be hits, while others think they’ll fail to really sell.

Toyota Motor Corp. may have kicked off the green-car movement with its Prius hybrid more than 20 years ago, but the company is not nearly as bullish as rivals about the American consumer embracing EVs. Bob Carter, executive vice president of sales for Toyota Motor North America, said at a conference affiliated with this week’s New York auto show that batteries are still too expensive and place plug-in cars out of reach for many buyers.

“On electrification, we see an opportunity in North America, but it’s much further down the road,” Carter said Tuesday at a forum co-hosted by the National Automobile Dealers Association.


“Unlike a few decades ago, retirees are leaving California, instead choosing other states in the Pacific West and Mountain West. We’re also seeing young professionals migrating to vibrant, metropolitan economies, like Washington, D.C. and Seattle.”

Wow, I could not believe how racist/ethnist this movie was. It was embarrassing. There was no mention by the host prior to the movie about the absolute inappropriateness of this movie. Period. Dot. No redeeming value whatsoever. Had this been a movie on African-Americans in the deep south, Doris Day would be a scandal. Instead it was set in Deadwood, SD, and every cliche about the American Indian was used. Despicable.

Both my wife and I hated the movie. I doubt she caught the racism -- she wasn't watching all that closely -- but I did remark that the movie was quite remarkable in the fact Doris Day pretty much carried the entire movie with her singing, dancing, and acting. Pretty much a one-woman show with all the other characters on stage not much more than her audience.

Wow, Sophia and I had a great time last (Friday) night. We started out at McDonald's. She had not been there in ages and this was a huge treat. We were there about 90 minutes: Sophia loves PlayPlace and all her newfound friends. Then, off to shopping.

Sophia needed a new light jacket for the cool evenings we are still experiencing in north Texas.

We went to Target. Nothing.

Then, Burlington Coats. Nothing.

This is not the time of year to be looking for coats in Texas. LOL.

We backtracked home. I spotted an Old Navy story. This was about 7:30 p.m. The store was packed
with customers. "Everything" in the store was 50% off; items not 50% off had a 20% discount.

We found the perfect light jacket. We both loved it so much, we got an identical jacket, but in a different color.

Then, the accessories: a pair of sunglasses and a new purse.

On the way home said she "wished she could be fours years old forever."

Seriously. That's what she said. 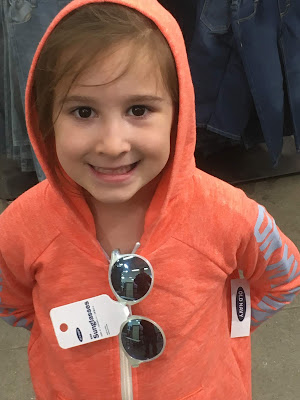 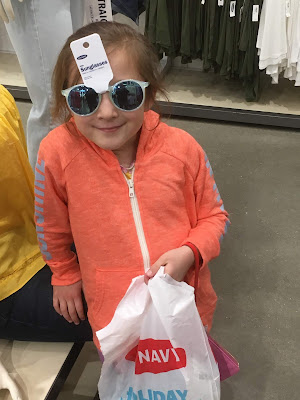 Note how she places her sunglasses when she is not wearing them.