Some twit tweeted that when the EIA weekly petroleum report comes out tomorrow, there will be a billion bbls of crude oil in US storage, suggesting crude oil should be selling well below $35. 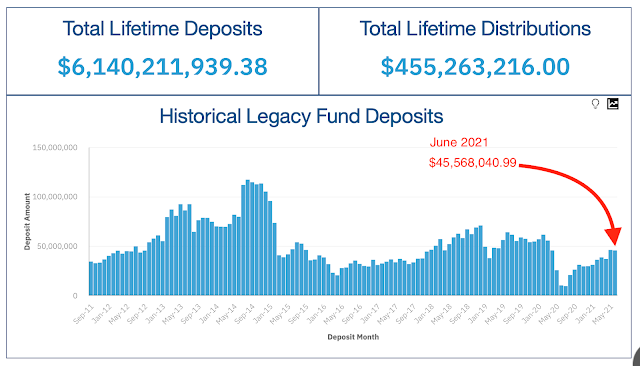 Posted by Bruce Oksol at 7:07 PM No comments:

Traveling For The Next Ten Days -- Blogging Will Be Irregularly Irregular -- June 22, 2021

E-mail may not get answered in a timely manner.

Comments to the blog may not get posted in a timely manner.

RBN Energy: Alberta's side of the Montney natural gas play.

The immense Montney Formation in Western Canada is almost equally divided between the two provinces of Alberta and British Columbia. However, on either side of the provincial border there are stark differences in the number of wells drilled, well length, well productivity, and natural gas production. All these differences have resulted in Alberta being the much smaller player in the Montney gas story, with production from its side of the formation only helping to hold the line on Alberta’s total gas output in the past few years. Today, we continue our Montney analysis by looking at gas well trends on the Alberta side of this prolific formation.

For nearly 100 years, Alberta has been the leading source of Western Canada’s natural gas supplies. Previously supported for many decades by production from conventional shallow gas wells, the province’s gas output has been steadily pivoting away from the shallow wells since the early 2000s, and toward wells that tap unconventional, gas-rich formations such as the Montney. These wells, which employ horizontal drilling and multi-stage completions to unlock their immense productivity and reserves, have come to play a growing role in Alberta’s natural gas supply picture, and for Western Canada’s gas supplies in general.