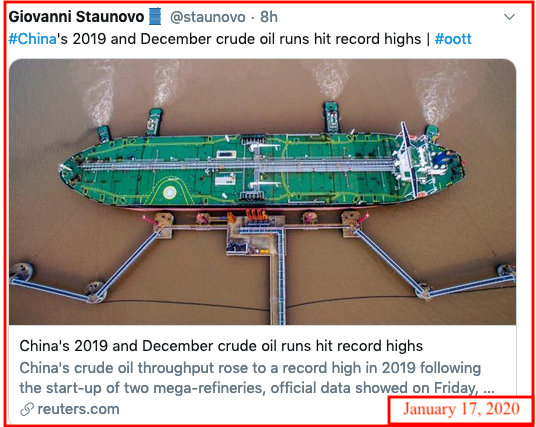 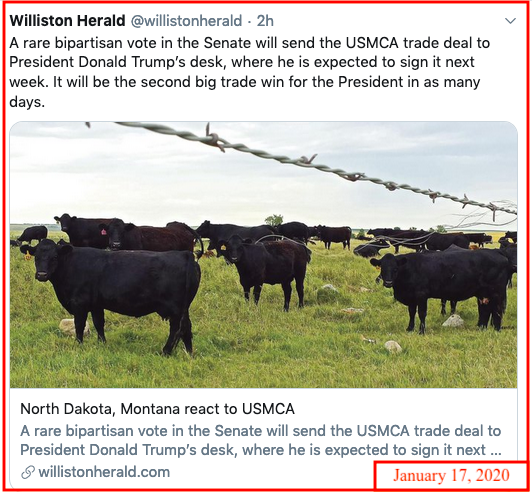 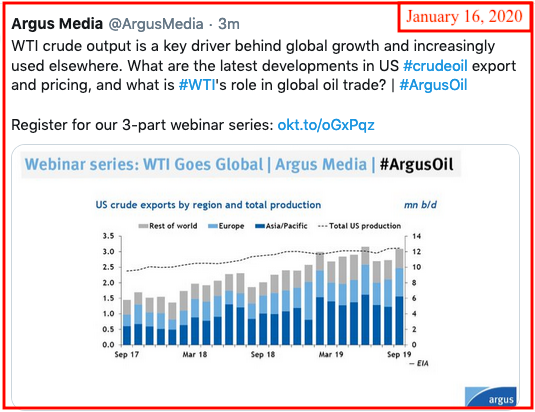 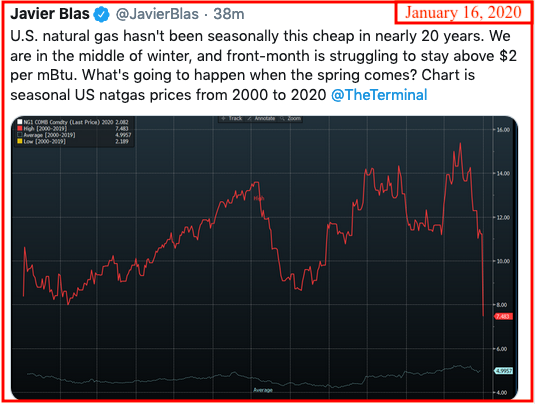 Downspacing / infill / development in the Bakken: 
Later, 5:35 p.m. CT: for the past month, the shale nay-sayers, led by the folks over at oilprice have been suggesting that shale operators are working through their DUC inventory to save costs. That has been a common theme over at twitter also: evidence that shale is in deep trouble is the fact that operators are working their way through their DUC inventory. They rarely post numbers. Apparently nationwide the number of DUCs decreased 10% month-over-month. What these nay-sayers don't tell us is whether it's oil or natural gas DUCs. I don't know either; I haven't seen the data but my hunch is that it is natural gas.

So, I was eagerly waiting to see the Bakken inactive well / DUC data for November, 2019.

Here are those numbers:

So, all that "talk" about operators working through their DUC inventory did not include the Bakken. In fact, both the number of DUCs and the number of inactive wells both rose, albeit not by much. That, to me, was an incredibly important data point. Despite the number of wells off line/DUCs actually increased, North Dakota production came very, very close to another all-time crude oil production record. 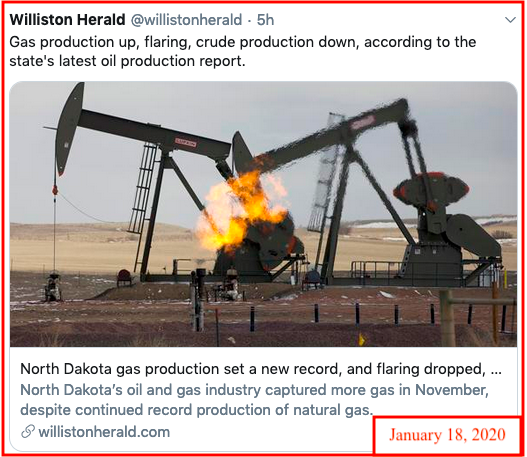 Posted by Bruce Oksol at 1:59 PM No comments:

It will take me a few minutes to do the usual summary but there was a huge surprise. Summary has been posted.
Posted by Bruce Oksol at 1:37 PM 6 comments:

Housing data: link here. I was driving Sophia to school when the report was released so I did not see the announcement on television.


According to one reader, Steve Liesman, CNBC) spent more time talking about the warm weather in December that accounted for the surge -- apparently didn't talk much about interest rates; optimism under Trump's policies; wealth effect of the market; near-record positive consumer sentiment; the fact that this is a 13-year high; soared almost 17%, etc., etc.

One would think that in thirteen years there would have been other "warm" Decembers especially with all the global warming we've had for the past three decades, but apparently it was the warm weather this year that was different somehow that drove the housing starts.

If in fact, it's all about warm weather, what's not to love about global warming with economic data like this? Highest level of housing starts since December, 2006. The percentage gain was the largest since October, 2016. November, 2019, data was revised upward.

From the linked CNBC article:

The housing market is regaining momentum after the Federal Reserve cut interest rates three times last year, pushing down mortgage rates from last year’s multi-year highs. The 30-year fixed mortgage rate has dropped to an average of 3.65% from its peak of 4.94% in November 2018, according to data from mortgage finance agency Freddie Mac.

And folks forget it was President Trump's constant and consistent calling on the Federal Reserve to lower interest rates. My hunch is that the Fed would not have cut rates to the extent it did had it not been for President Trump.


Consumer sentiment unexpectedly edged down to a reading of 99.1 in January, according to the University of Michigan’s preliminary monthly print for its survey of consumers.

Consensus economists had expected the headline print to hold at 99.3 for the month, matching December’s reading, according to Bloomberg data. The reading, however, still held relatively close to 2019’s recent high of 100.0 from May.

Schlumberger: stock surges after profit, revenue beat expectations. Adjusted EPS came in at 39 cents vs 37 cents forecast. Net income fell to $333 million of 24 cents/share, from $538 million, or 39 cents/share in the same period a year ago. Revenue rose to $8.32 billion from $8.18 billion, beating a forecast of $8.16 billion. Free cash flow was $1.5 billion for the quarter and $2.7 billion for the year.

Director's Cut: scheduled to be released this afternoon.


Seven wells coming off confidential list today -- Friday, January 17, 2020: 59 for the month; 59 for the quarter; 59 for the year;
RBN Energy: the thinking behind a planned gulf coast ethylene-to-alkylate project. This is a great reference article. Very, very educational.


For a few years now, the Shale Revolution has been opening up development opportunities hardly anyone would have thought possible in the Pre-Shale Era. For example, new crude oil, natural gas and NGL pipelines from the Permian to the Gulf Coast, lots of new fractionators and steam crackers, as well as export terminals for crude, LNG, LPG, ethane and, most recently, ethylene. And here’s another. Thanks to the combination of NGL production growth and new ethylene supply — plus increasing demand for alkylate, an octane-boosting gasoline blendstock — the developer of a novel ethylene-to-alkylate project along the Houston Ship Channel has reached a Final Investment Decision (FID). Today, we discuss how the FID is driven by both supply-side and demand-side trends in the NGL and fuels markets. .

...Examples of the knock-on effects of the flourish caused by plentiful drill-bit hydrocarbons abound, but one that caught our eye in recent weeks is Next Wave Energy Partners’ (NWEP) FID on its planned 28-Mb/d ethylene-to-alkylate plant in Pasadena, TX, the company’s project, known as Project Traveler. ....

What Next Wave saw — in addition to the trends of growing butane and ethylene supply, coupled with increasing demand for alkylate — is that the technology exists to convert low-cost, NGL-based products into an important gasoline blendstock. Project Traveler, a planned 28-Mb/d ethylene-to-alkylate plant scheduled to begin operation in mid-2022, will have two main elements: a dimerization unit that reacts ethylene with itself to form butylene, and an alkylation unit that reacts butylene and isobutane to form a pure alkylate. We hear that Next Wave’s alkylate will be 96 octane — 4 higher than the average 92-octane alkylate produced at refineries — with an RVP of only 3.5 psia and next to no sulfur content.

Ethylene will be delivered to the Pasadena (TX) plant site via the half-dozen or so ethylene pipelines that already run along the site’s boundary; isobutane also will be delivered by pipe. As for the alkylate produced, Next Wave plans to pipe it to two large, close-by gasoline-blending and marine-terminal facilities in Pasadena, one owned by Kinder Morgan and the other by International Terminals Co. (ITC). Kinder Morgan’s facility is the largest gasoline blender by volume in the U.S.

Altogether, Project Traveler has a lot going for it. To put it simply, it’s planning to use ethylene produced from an increasingly available NGL purity product — ethane — to make an increasingly important blendstock — alkylate. In doing so, the facility will provide its ethylene suppliers with a new, albeit small market, for their product; and give the project’s alkylate buyers a new source for the blendstock, all the while mitigating their commodity risk.