There appear to be no wells scheduled to come off the confidential list Wednesday (link here).
Posted by Bruce Oksol at 6:54 PM No comments:

As the number of failed operators mounts, the surviving companies are laying the groundwork for what they forecast will be an era of slower but steadier growth in the state at the epicenter of the U.S.’s energy boom.

Cash-strapped operators are dialing back or abandoning North Dakota. But the survivors—many of which are bigger and more diversified players—are finding ways to make the Bakken Shale formation pay even at low oil prices by trimming budgets, improving field logistics and focusing on their best assets.

This downturn marks the first bust since the rise of so-called unconventional shale-oil plays nearly a decade ago, fueled by new technologies, ready access to capital and a surge in crude prices to record highs. One of the world’s highest-cost oil fields, the Bakken is key test ground for the U.S. energy industry’s wherewithal.

“You can’t shut down the Bakken. The American oil industry is getting smarter and more efficient” in how and where it drills, said Kathy Neset, a veteran geologist who owns a consultancy in Tioga, N.D. “We’ve still got pins on the wall,” she said, pointing to a map with the location of active rigs.

The rest at the link.
Posted by Bruce Oksol at 3:53 PM No comments:

May 22, 2016: not much news/updates on perhaps one of the biggest "crime" stories coming out of Boomtown so far this year. Data points:

Original Post
Williston Herald reports:
The way the story reads suggests the victims did not live in the apartment: "... unsure whether [the guns] belonged to the victims or the people who lived in the apartment.
Posted by Bruce Oksol at 1:46 PM No comments:

Many, many story lines.

The most obvious story line -- compare production-consumption of each energy source; the delta is that energy available for export (or wasted).

For example:
It would be interesting to see how much natural gas is needed to "back-up" unreliable/intermittent energy. Could it be as much as four or five quadBtu? I have no idea.

One quadrillion in the US, according to wiki, is 1 x 10^15, or one thousand million million.

I often make simple arithmetic errors. Boe and bbls of oil were used interchangeably in some of the equations because that's all I had to work with.

Mr Big Stuff. Pipelines. PennEnergy is reporting that TransCanada will acquire Columbia Pipeline Group in a deal valued $13 billion, including debt ($25.50/share in cash). At $25.50, this represents a premium of 32%. CPG:

Recommendation: disregard my notes completely and go to the linked sources directly. 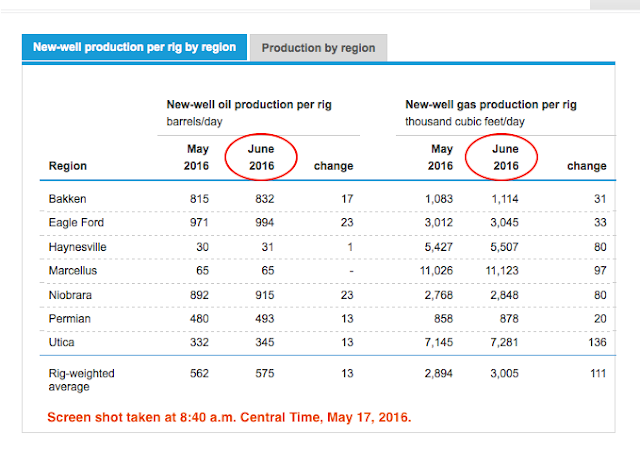 When something happens overnight with no explanation, one needs to start following the dots. The overnight event? The back-up in TSA lines. Literally, the story popped up overnight and stories coming out of the terminals suggest the TSA agents are standing around, joking, no sense of urgency. So, let's back track this:


Total output is expected to fall by nearly 113,000 bpd to 4.85 million bpd, according to the U.S. Energy Information Administration's (EIA) drilling productivity report released on Monday.

Saudi Arabia not mentioned. What's up? Bloomberg/Rigzone is reporting:


Algeria will supply oil and other energy products to Jordan for the first time under a memorandum of understanding signed on Monday, as the OPEC member seeks to diversify sales after years of stagnating crude production.

Sense of energy urgency in Japan. Bloomberg/Rigzone is reporting:


Energy companies in Japan, a country almost entirely reliant on fossil fuel imports, are slashing investments by more than one-third following the collapse in commodity prices, increasing pressure on Prime Minister Shinzo Abe’s government to supplement exploration budgets. Spending will plunge 37 percent to about 1.2 trillion yen ($11 billion) in the year to March, the country’s Ministry of Economy, Trade and Industry forecast in a report Tuesday.

The drop, just one slice of cuts globally, adds urgency to the government’s plans to sustain investment by the country’s explorers and accelerate efforts to get 40 percent of its oil and gas from domestic firms. The world’s biggest consumer of liquefied natural gas and fourth-largest crude buyer relies on imports for 94 percent of its primary energy supply, according to the country’s Federation of Electric Power Companies.

Hoax. Most of us here in Texas knew this was a hoax when it was first reported. Glad to see The New York Times picked up the story:


The case of the chocolate cake slur, it seems, was simply a hoax.

An openly gay Texas pastor who had accused Whole Foods of defacing his cake with an anti-gay slur dropped his lawsuit against the grocery chain on Monday, issuing an apology that said he was wrong to “perpetuate this story.”

“The company did nothing wrong,” the pastor, Jordan Brown, said in a statement. “I was wrong to pursue this matter and use the media to perpetuate this story.”

He also apologized to the lesbian, gay, bisexual and transgender community “for diverting attention from real issues.”

Whole Foods had forcefully rejected the accusations by Mr. Brown, 31, who claimed that he had bought a frosted cake from a store in Austin, TX, and asked that the words “Love Wins” be written in icing on top — only to discover while driving away that a slur had been added.

Mr. Brown’s apology represented a remarkable about-face from his remarks last month, delivered at a news conference alongside his lawyer, during which he choked back tears as he told the story.

Maybe I will get to these later, maybe not. Doesn't matter.


From The Los Angeles Times.

Female directors make sex on screen more interesting, Susan Sarandon has claimed, as she sets her sights on making the pornography industry more acceptable to women.

The Oscar-winning actress said that female directors were less embarrassed about exploring the reason people have sex and “what the scene is supposed to tell you about these people”.

Sarandon was speaking at the Cannes Film Festival, which has often been overshadowed by accusations of sexism. There is annual criticism of the low number of female directors, and last year it emerged that festival organisers demanded that women attending red-carpet events had to wear.