For newbies: if interested in looking at some "monster" wells in the Newburg-Spearfish-Charles unit, see this link where you will find these examples:


Spearfish
Posted by Bruce Oksol at 5:35 PM No comments:

For Texas residents, don't toss this away as junk mail: 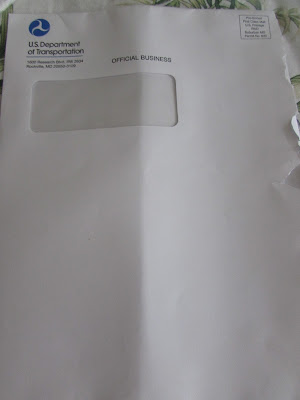 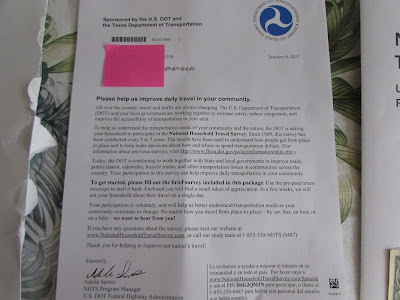 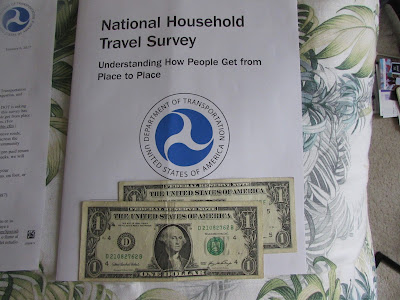 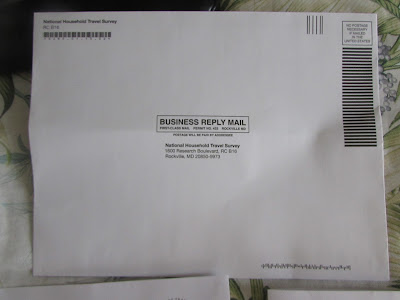 And for those confused, like I was, the difference between a meme and a trope.
Posted by Bruce Oksol at 1:51 PM No comments:

Based on fairly extensive surfing of the net over the past month or so, there seem to be two under-reported international energy stories: India and Mexico.

Both counties are reporting surging demand for fossil fuel energy.

Platts is reporting a podcast today ...


Mexico’s higher gasoline prices for consumers is having a ripple effect through North American gasoline markets as the US exports more product to its neighbor.

... which links to a earlier story:

When I say under-reported, I mean these stories are not often found in print editions of US "national" newspapers nor in regional newspapers.

From the earlier story at Platts:


Mexico's record-low refinery production and growing consumer demand helped push US gasoline exports there to a new high in October, a trend that has boosted prices in both countries.

Gasoline exports to Mexico climbed 1.86 million barrels to 12.08 million barrels in October, according to US Energy Information Administration data released Friday, the highest total since that data started being tracked in 1993.

Mexico is by far the largest importer of US gasoline, taking in 45.8% of the 177.4 million barrels of finished gasoline the US exported through October of this year.

With regard to India, a John Kemp graphic, via Twitter, is worth ten-thousand words. This is not a projection; this is "real": 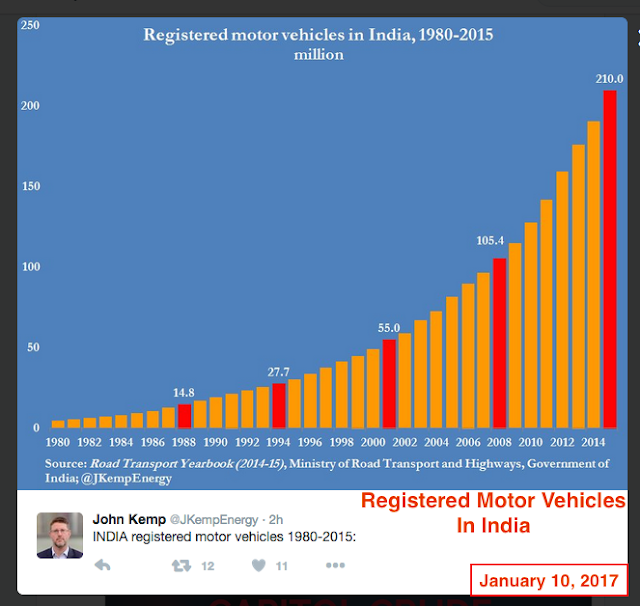 Bingo Blackout! The 2016 table is complete. 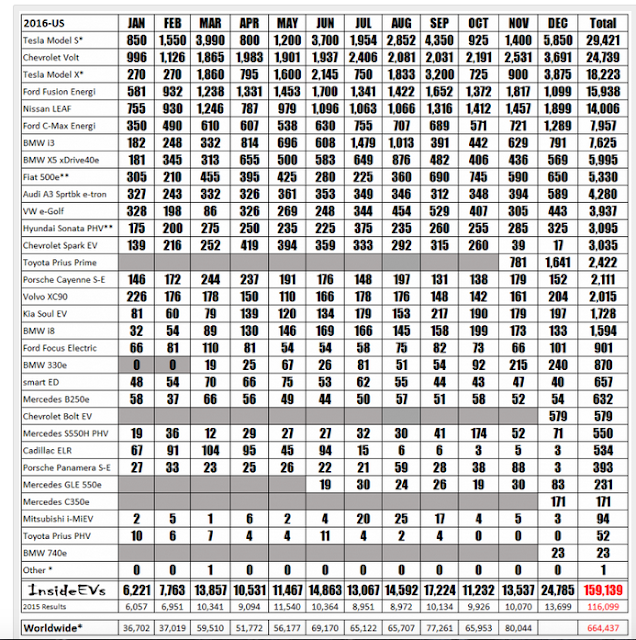 Note the huge jump in month-over-month (December-over-November) deliveries for Tesla Models S and X. One would like to see a bit more about these numbers. Assuming the numbers are "real," and/or "accurate," it is due to Tesla's business model: subscriptions or ordering ahead-of-time, sight-unseen.
Posted by Bruce Oksol at 12:13 PM No comments: 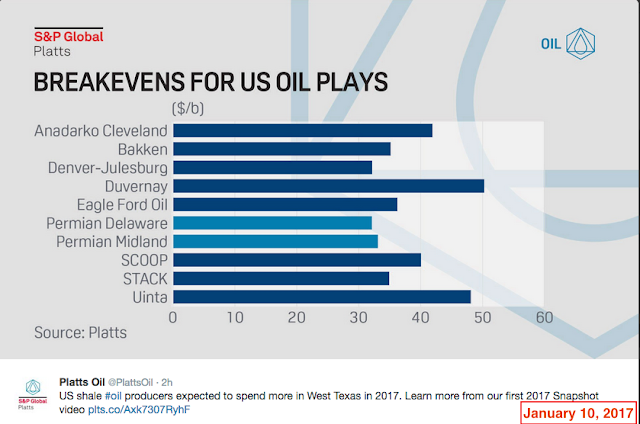 Ten plays noted, from most greatest-to-least "break-evens." All are below $50, though Duvernay is right at $50. The best is Permian Delaware at about $32. Compare with the Bakken at about $34.
I was familiar with all of these, and all of them are linked at the sidebar at the right, with one exception: Anadarko Cleveland.

Anadarko Cleveland has been mentioned on the blog several times:
The Duvernay is in British Columbia.


“The general decline in U.S. crude oil production that began almost two years ago is likely over, as higher average oil prices and improvements in drilling efficiency are giving a boost to output.”

“Final data are expected to show that U.S. oil production increased during the last three months of 2016, the first quarterly output increase since early 2015.”

“China’s oil production will continue to decline this year and during 2018 because of cuts in investment by oil companies.”


“Despite higher pump prices, U.S. gasoline consumption is expected to reach a record high in 2017 because of a strong economy and higher employment.”

“Ethane is expected to account for almost half of U.S. liquid fuel consumption growth in 2018, as several petrochemical plants come online that use ethane as a feedstock in the manufacturing process.”


“U.S. natural gas production is expected to rise in each of the next two years, reversing the first decline in annual output in more than a decade that occurred during 2016.”


“The average U.S. household will use 3% more electricity between December and March compared to the same period last year because of forecast colder temperatures than last winter.”


“Coal is expected to make a modest comeback in 2017, accounting for a slightly larger share of U.S. electricity generation than natural gas in response to higher natural gas prices.”

“Higher coal use by the U.S. electric power sector in 2017 is expected to result in an increase in domestic coal production this year.”


“The amount of U.S. electricity generated by utility-scale solar energy is on track to double from 2015 levels to 1.2% in 2018, while wind power’s share of total generation over the same period is expected to increase from 4.7% to 6%, close to hydropower’s share of 6.5%.”

Hey, This Is Texas! Of Course This Facility Is The Largest Of Its Kind In The Universe -- January 10, 2017

This could be the biggest non-Bakken story of the year to date.


The Petra Nova facility, a coal-fired power plant located near Houston, Texas, is one of only two operating power plants with carbon capture and storage (CCS) in the world, and it is the only such facility in the United States.

Petra Nova’s carbon-capture system is designed to capture about 90% of the carbon dioxide (CO2) emitted from the flue gas slipstream, or about 33% of the total emissions from Unit 8. The post-combustion process is energy intensive and requires a dedicated natural gas unit to accommodate the energy requirements of the carbon-capture process.

By comparison, Kemper had been designed to capture about 65% of the plant’s CO2 using a pre-combustion system. The capital costs associated with the Kemper project were initially estimated at $2.4 billion, or about $4,100 per kilowatt (kW), but cost overruns led to construction costs in excess of $7.5 billion (nearly $13,000/kW). Petra Nova CCS retrofit costs were reported to be $1 billion, or $4,200/kW, and the project was completed on budget and on time.

At Reuters via Rigzone:

DAPL wind child to be life-threatening. Story at Bismarck Tribune.

Five stories with regard to the market caught my attention this morning;
Disclaimer: this is not an investment site.

Job cuts: not everyone is adding jobs. Big Box stores struggling. Today, Wall Street Journal reports that Wal-Mart plans new round of job cuts. There are many, many factors, but some folks will argue that this was predicted when Wal-Mart did the politically-correct thing to raise the minimum wage.  The jobs cuts apparently not so much at the retail stores themselves, but at its headquarters in Arkansas and "regional support personnel."


The world’s biggest retailer plans to eliminate hundreds of jobs before the end of its fiscal year on Jan. 31, both at headquarters and regional personnel that supports stores, these people said. Many of the eliminations will affect Wal-Mart’s human resources department, a large team that some senior executives believe should be more efficient or whose duties could be handled by outside consultants, said these people. Other departments could be affected as well, say these people.

It appears the focus on "job cuts" is just a bit of smoke. The fire is e-commerce competition from Amazon.


The recently announced combination of DCP Midstream LLC and DCP Midstream Partners LP creates the nation’s largest natural gas processor and natural gas liquids producer at what may be a particularly opportune time.

Better yet, many of these assets serve some of the U.S.’s most prolific and promising production areas, including the Midland and Delaware basins within the Permian; the Denver-Julesburg (DJ); and the side-by-side SCOOP and STACK plays. In today’s blog, we review the combined entity’s assets and prospects for growth in what soon may be happier times for NGL processors.

US Small Business Optimism Surges By Most Since 1980 But Every Breath You Take, I'll Be Watching You -- President Obama -- January 10, 2017

US small business optimism surges by most since 1980. From Bloomberg:


Optimism among America’s small businesses soared in December by the most since 1980 as expectations about the economy’s prospects improved dramatically in the aftermath of the presidential election.

The National Federation of Independent Business’s index jumped 7.4 points last month to 105.8, the highest since the end of 2004, from 98.4. While seven of the 10 components increased in December, 73 percent of the monthly advance was due to more upbeat views about the outlook for sales and the economy.

Over at The New York Times.


Milo Yiannopoulos — the infamous internet troll, Donald J. Trump supporter and editor at Breitbart News — has compared Islam unfavorably to cancer, mocked transgender people and suggested that women who are harassed online should stay off the web. Last July, he was permanently barred from Twitter for violating the platform’s rules against hate speech and harassment.

So when Threshold Editions, a conservative imprint at Simon & Schuster, gave him a six-figure publishing contract, the blowback was swift and furious. There were calls for a boycott of all of the company’s books, a vast catalog of some 2,000 titles from 50 imprints. Some of Simon & Schuster’s authors — including Karen Hunter, Danielle Henderson and Bradley Trevor Greive — denounced the publisher on social media. The Chicago Review of Books said it would not review any of the company’s books this year.

This also explains why it's hard to find Michael Savage books at your local bookstore.

#10 in the 20-song countdown. This is quite incredible how this matched up. President Barack Obama will give his "last" major speech before he leaves office. In Chicago. His hometown.

This will be his theme put to music. I'll be watching you.


Every Breath You Take, The Police
Posted by Bruce Oksol at 8:20 AM No comments: