Baylor loses to Yale, and Purdue loses to UALR. That would be Little Rock, Arkansas. Nice article on the upsets at CNN.

I see Jim Cramer, who a couple of days ago said not to buy into this market, is now telling us he sees a big rally around the corner. He may be a nominee for the 2016 Geico Rock Award.

Today, near the close:

According to The Los Angeles Times, the EPA says southern California's smog-fighting plan failed. No problem. California will vote for Hillary Clinton who will pretty much tax everything that moves, and will ban the rest.

All the liberal newspapers are blaming the GOP for following the process, not principle. The GOP is simply following the "Biden Rule."

Global warming? Boston could see huge snowstorm Sunday evening; could start snowing during St Patrick's Day Parade. This year the parade is all about Gay Pride.

Boomtown USA Will Get Special Ops Team Now That Things have Quieted Down -- March 17, 2016


Williams County will soon have its own specially trained group of law enforcement officers armed with the skills and resources to respond to a number of different emergencies.

The sheriff’s office is forming a 20-member special operations and response team, designed to handle dangerous situations, offer help during natural disasters and even act as extra security when the need arises.

Pretty cool.
With drones out of Grand Forks, helicopters may not be needed:


Ride of the Valkyries

For the archives (one can get almost any spin on crime statistics as one wants):

“A lot of it is in China [in the form of stockpiles], there’s some in India, some sitting in pipelines and some in ships,” he said. The IEA, an energy policy adviser to the OECD countries, does obtain data from non-OECD countries, contrary to some assertions, but it’s not perfect, the official stressed. “Get over it,” is how [IEA's head of oil industry and markets division Neil] Atkinson summed up his view on the hullabaloo.

David Hewitt, Managing Director at Credit Suisse and fellow panelist at the SIEW event, agreed, saying that some traders seemed to have seized upon the “missing barrels” story in their hunt for reasons to be bullish about the market.

Incidentally, both Atkinson and Hewitt were also dismissive about the other bullish ghost still lingering over the market — the “production freeze” initiative by some OPEC and non-OPEC producers. Anyone got a number for oil’s Ghostbusters?

It's an attention-getting headline, but it's a non-story.

Global strategic petroleum reserves: 4.1 billion bbls; 292 million / 4.1 billion = 7.1%
If the oil truly exists but is not accounted for, it is most likely:
The oil industry is one of the most secret industries in the world. No one knows exactly how much oil is out there, "unaccounted for." Every month the NDIC reports monthly production for the state of North Dakota; every month the figures are revised.

What drives me nuts is how long it takes the US government to report monthly import data. They should have that data the day after the month ends, but, in fact, it's about 45 days late (plenty of time for insiders to act).
Posted by Bruce Oksol at 10:21 PM No comments:

March 17, 2016: one SeekingAlpha contributor is calling this an emergency meeting with this summary:
That was posted yesterday. Two key words. The first "key word" was "emergency." I can't disagree. The Mideast moves extremely slowly; the next regularly scheduled OPEC meeting is this June; they easily could have waited. June is but a few months away and they could always have done things "behind doors" but now, all of a sudden, April 17th.

Second "key word": did you all catch that? Up until now it's been all about a "production freeze." All of a sudden we see the word, "cut."

And as noted on the blog the last couple of days, "the Iran problem appears to have been solved."

I think the contributor is posting with a bit of hyperbole, along my lines (LOL) but it's getting very, very interesting.


The 2016 Saudi budget assumes an average oil price just above $60. They have been bleeding $20 billion per month. They cannot possibly believe that this has been worth the small increase in market share they gained.

If other producers can collectively manage a cut of one million barrels per day, perhaps they will agree to a small 250,000 b/d cut. Together, they could get the price above $50/bbl, maybe even to $60/bbl.

The problem with Iran not participating seems to be understood due to the cut forced on them by the sanctions. The Saudis can agree to a small cut and save face.
The eventual response by the U.S. oil shale industry will take time, and they can deal with that in due course. Right now, they need relief from the bloodbath.

Every month we fail to meet those thresholds means the price of oil must go up in December to get an average of $80/bbl.

I don't see any possible way we get to an average of $60 for the entire year, against which the Saudi budget is apparently set, $60-oil for the year.

But most interesting, historically it's been said a gazillion times, the Saudi set their annual budget based on $100 oil. If that's accurate, and if it's accurate the Saudis are setting this year's budget on an average of $60 oil, they are in deep doo-doo.

Saudi Arabia getting ready to monetize some of their midstream/downstream assets tells me one thing: it's going much more badly for Saudi Arabia than they appear to be letting on. If they thought this was going to be a short-term problem, they would try to weather the storm. Saudi says they've seen this before -- booms and busts -- but I don't recall them needing to borrow money (do you remember the $10 billion loan they were considering -- by a group of men whose religion does not condone lending) or monetizing their assets in the past. But I have a short memory and am probably wrong.

To what degree did the recent Putin announcement that his mission was accomplished have to do with this. Perhaps nothing, but in the Mideast, coincidences cannot be easily dismissed.  Quid pro quo? Russia? Saudi Arabia?

Looking for something else, I ran across these wells. Note the "test date," the IP, and the cumulative production. Thirty-second soundbite: if they want, drillers can get 200,000+ bbls of oil in less than two years from one well in the better parts of the Bakken. And I think 200,000+ bbls is a conservative estimate.
A digression:


This phrase originated in the 1986 horror film The Fly, written by the Canadian David Cronenberg and starring Jeff Goldblum (as Seth Brundle) and Geena Davis (as Veronica Quaife). The shortened expression 'be very afraid' was already in use in the USA prior to 1986; for example, it was used in the television series All My Children in 1970.

Quaife is a reporter working on the teleportation story. When it becomes clear that Brundle is starting to turn into an insect, he pleads with one of the characters "don't be afraid" and Quaife's response is:

Talking heads suggest price of oil is "surging" due to weakness of the dollar. To some extent. Perhaps. Call me Thomas. 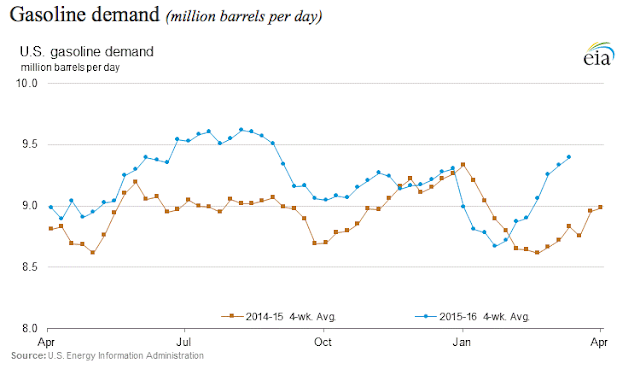 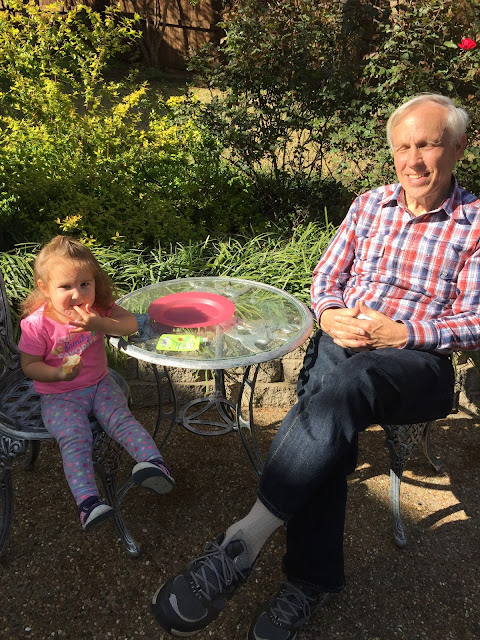 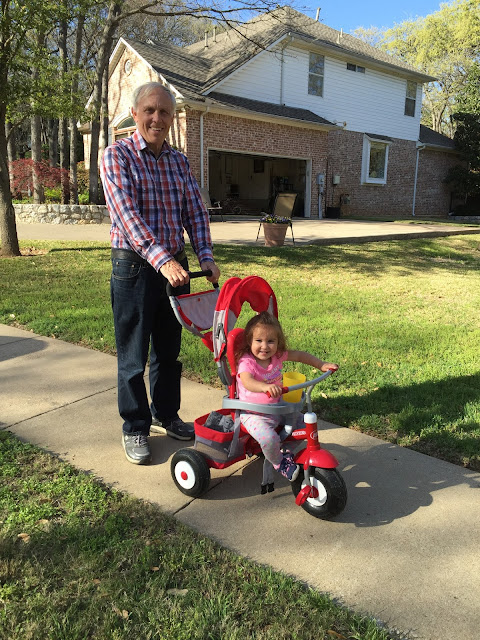 Unlike her 9-year-old sister (Olivia), Sophia now loves to have her photograph taken. She says "cheese" when the camera comes out and she loves watching videos of herself. Notice the "NASCAR Pose Of Confidence."
Posted by Bruce Oksol at 10:37 AM No comments:

Busy, busy day, but I'm here and we will soon get started.

I got my 5.0 mile ride to Starbucks in before the tornado hit. The tornado siren went off in the football field / high school complex behind our back door. My wife saw me getting ready to ride, asking if I was going to ride in the tornado. I told her I never ride in a tornado, but if I see one, I will take some photos.

Look up the adage "crying wolf" in a DFW phrase book and you will see a picture of a tornado siren.


Every day, refineries along the U.S. Gulf Coast produce far more gasoline, diesel and jet fuel than the region could possibly use, and demand for these fuels along the East Coast for transportation and heating is far higher than local refinery production. To help bring the two regions into balance, a complicated network of pipelines, ports, Jones Act vessels and storage facilities has been developed over the past 70 years—and continues to be updated and expanded. Today, we begin a new series on how millions of barrels of these fuels are moved between and within the nation’s largest refining region and the region where more is used than any other part of the U.S.

As we’ve said many times in the RBN blogosphere, the U.S. energy sector has undergone a nearly top-to-bottom transformation over the past few years, mostly due to the Shale Revolution. New production areas for crude oil, natural gas and natural gas liquids (NGLs) have opened up; new oil, gas and NGL pipelines have been constructed (and the flow-direction of many old—and not-so-old--pipelines reversed).  Two things that have not changed, though, are 1) more than 50% of the nation’s refinery capacity is along the Gulf Coast, and 2) the biggest market for the transportation fuels (and heating oil) that refineries primarily produce is the East Coast.

I posted this yesterday, and now it's the first story in the list of Yahoo!Finance stories today, said to have been posted six hours ago: Shell and Saudi Aramco split their assets including the three refineries along the US Gulf Coast.

I think the bigger story is how fast the price of oil is moving up, something we've talked about before.