Flashback: The KOG/BTA Deal -- Looks Like KOG Has A Great BTA Well

Link here first to flash back to the KOG/BTA deal.

This looks like a BTA well that's going to be a great KOG well. This well has not reported an IP yet; it is on DRL status. I assume we will see an IP any day now. But note, this well started producing in October, 2011 (21 days) and has already produced 62,000 bbls of oil after only 3.5 months (most recent data 1/12). The well is in the Epping oil field northeast of Williston.
The KOG/BTA deal looks better and better for KOG.
Posted by Bruce Oksol at 8:53 PM No comments:

For it, against it, indifferent --


Geography Question, Miss Teen USA 2007,
Maybe a new poll is indicated. One is a highly paid US solicitor general. One is a teenager.
Posted by Bruce Oksol at 7:17 PM 2 comments:

The four Enerplus wells are probably on the same pad in Mandaree oil field, Dunn County.

Eight (8) wells released from "tight hole" status, including:
Three of the eight were not fracked/completed. 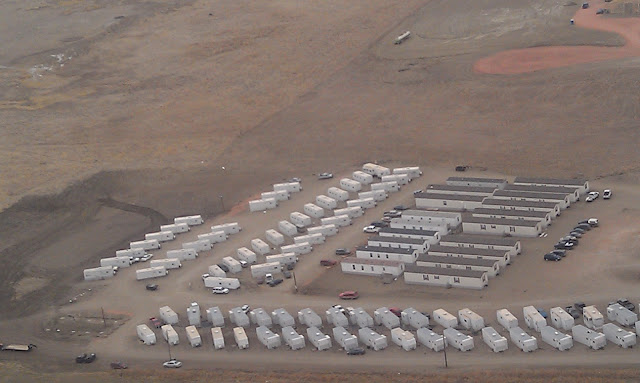 One of many photos Kent sent me from the heart of the Bakken. This is one of many man-camps in the Watford City, North Dakota.

The Bakken activity is moving to northeastern McKenzie County, between Alexander and Watford City.

Best part of the photo above: note all the open land. 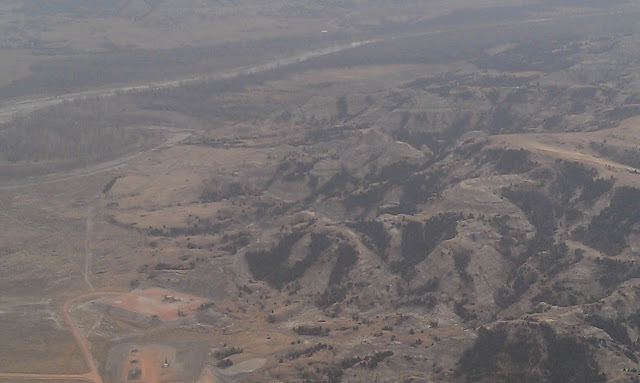 A random photo of an oil pad in North Dakota. All photos on this page sent to me by Kent. 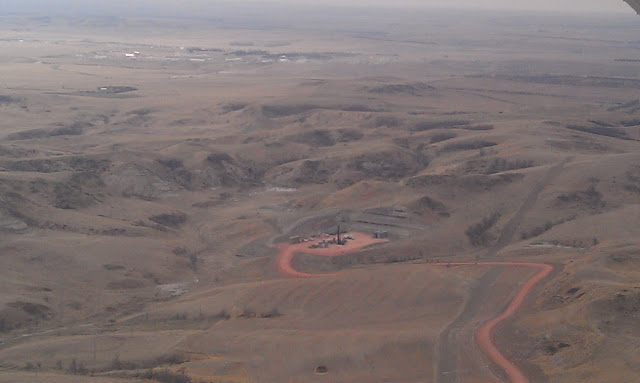 Last week one of the "fast-money" talking heads on CNBC said he shorted AAPL at $595. It will be interesting if anyone calls him on his trade.

I've always said that shorting AAPL is a fool's game.

AAPL hits an all-time high of $615 earlier today.  That means, on paper, the individual who shorted at $595 is now down $20 for every share he shorted.

Idle chatter only. I don't invest in AAPL. This is not an investment site.
Posted by Bruce Oksol at 12:23 PM No comments:


Following on the heels of the opening of our Dunn County Lodge last month*, Target Logistics is pleased to announce the construction of the 230-room Stanley Hotel in Stanley, North Dakota.

Located adjacent to our existing Stanley Cabins, the hotel offers oversized extended-stay hotel rooms with high-quality furniture and fixtures, and expands our Stanley Complex to over 500 beds.

The hotel features three types of rooms, a conference room and business center, enclosed walkways, a full-service restaurant, and a recreation center with gym and saunas. Construction began in the midst of the harsh North Dakota winter in order to meet our client's needs and deadline.

Opening in late summer 2012, The Stanley Hotel is another example of how Target Logistics listens to the needs of both our clients and the community to answer the Bakken's critical need for beds while also providing a valuable (and attractive) solution that is a source of pride for the community.

I assume this is the Lodge that Dickinson turned down last year.

Wow, "it" never quits -- "it" being the opportunities that the Bakken provides.
Posted by Bruce Oksol at 11:13 AM 6 comments:

Inexpensive Natural Gas Bringing Manufacturing Jobs Back to the US

I blogged about this a long time ago. I was taken to task by a drive-by reader for suggesting that manufacturing companies' decisions to move back to the US were due to inexpensive natural gas. I won't look for the link; it would take too much time even if I could find it. Doesn't matter.

It's being discussed again, this time over at Carpe Diem. I think it's been discussed there before. Nothing new, but it's a great story worth repeating.

But there's an additional little nugget. The manufacturing companies who never moved are already ahead of the game and taking advantage of this inexpensive energy. Their margins must be improving, and they must be more competitive compared to their Asian counterparts. Along with union rules in Germany and France, one can see why "foreign" auto manufacturers relocated in George, Alabama, and elsewhere in the the southern United States.

And all this job creation despite the headwinds / obstacles put up by the administration to hamstring the oil and gas industry. Go here for one of my favorite commentaries.
Posted by Bruce Oksol at 9:45 AM No comments:


The Seaway pipeline will carry 850,000 barrels of oil a day away from Cushing by 2014, owners Enbridge Inc. and Enterprise Products Partners LP announced this week.

“It's not going to help us a bunch,” said McDonald, former chairman of the Oklahoma Independent Petroleum Association.

So it goes. Thank goodness the president stands his ground and continues to slow-roll the industry. We simply can't keep up with the Bakken and drilling in other unconventional shale on non-Federal land.


Original Post
[This is a huge story: the "double Seaway oil pipeline" is one of five headline stories on the Yahoo!Finance front page Tuesday evening. It will be there for several hours, perhaps into tomorrow. Since it parallels an existing pipeline, I would assume that it will be permitted a lot more quickly than the southern portion of the Keystone XL. This is quite incredible.)

The story is a bit confusing for me to read, especially in light of so many pipeline announcements, it is hard to keep track of what is new, what is old. But this story comes on top of the Texas Express NGL pipeline mentioned yesterday involving Enbridge, Enterprise, and Anadarko.


This story is particularly confusing for a couple of reasons. First, there appear to be two stories, and second, the method of expansion is not explained until later in the article. But if I read the story correctly, these are the three takeaways:
1. Enbridge is on track to reverse the oil flow in the Seaway from Cushing to the Gulf later this summer, and thereby help relieve the congestion of all the Bakken oil ending up at Cushing, as well as oil from Gulf ports, and Canadian oil. Initially, the reversal will provide capacity of 150,000 bopd from Cushing to the coast, and that will rise to 400,000 bopd by 2013 when additional pumps are installed.
2. Enbridge and Enterprise will add a 512-mile pipeline parallel to the current Seaway pipeline by mid-2014. This will add 450,000 bopd. [Comment: that will just barely handle the new Bakken oil production projected by then.]
3. Enbridge will build a new pipeline -- the Flanagan South project -- linking Illinois with Cushing. The Flanagan South Pipeline from Flanagan, Illinois to Cushing, Oklahoma will be upsized to a 36- inch diameter line with an initial capacity of 585,000 barrels per day (bopd).
Meanwhile, the Keystone XL dithers. Enbridge needs to send the President, the Sierra Club, Warren Buffett, et al, a huge thank you letter.
For investors, company, P/E, and yield:
By the way: think of the number of jobs this will produce: building two new pipelines, adding additional pumps to existing pipeline. It's almost criminal to think of $1 trillion in federal government that resulted in "no" new jobs. At least that's my myth. And I don't think I'm too far off the mark. Again, some numbers rounded.
Posted by Bruce Oksol at 9:02 AM 1 comment:

The President Keeps His Promise -- Kill The Coal Industry

August 13, 2013: this Motley Fool article is confusing, hard to read, poorly written, but close reading gives one an idea of where utility prices are headed. I'm not sure if I'm reading what Motley Fool has to say, but it sounds like natural gas is subsidizing the high cost of renewable energy. Wind is the least expensive renewable energy source out there, and it still requires huge government intervention to make it "profitable." If the link breaks:


Despite the rising supply of higher-priced coal-based energy and its nuclear problems, Duke did not end North Carolina's renewable energy program.

It is buying 7 megawatts of commercially-produced solar, for instance, and will continue to purchase solar power from rooftop owners. The company also has installed over 1,000 megawatts of wind power. Duke's policy of grabbing energy with both hands for re-sale to others should be subject to question, because the Energy Information Agency notes that wind farms are becoming more efficient, and total demand is down.

Efficiency pays, it's the cheapest renewable fuel there is, and the more efficient the economy gets the harder it will be for marginal electricity suppliers to profit on their investments.

May 22, 2012: I have no idea how accurate this politically-charged message is but I will archive it, allowing us to to check it out later.


Last week PJM Interconnection, the company that operates the electric grid for 13 states (Delaware, Illinois, Indiana, Kentucky, Maryland, Michigan, New Jersey, North Carolina, Ohio, Pennsylvania, Tennessee, Virginia, West Virginia and the District of Columbia) held its 2015 capacity auction. These are the first real, market prices that take Obama’s most recent anti-coal regulations into account, and they prove that he is keeping his 2008 campaign promise to make electricity prices “necessarily skyrocket.”

The market-clearing price for new 2015 capacity – almost all natural gas – was $136 per megawatt. That’s eight times higher than the price for 2012, which was just $16 per megawatt. In the mid-Atlantic area covering New Jersey, Delaware, Pennsylvania, and DC the new price is $167 per megawatt. For the northern Ohio territory served by FirstEnergy, the price is a shocking $357 per megawatt.

Why the massive price increases? Andy Ott from PJM stated the obvious: “Capacity prices were higher than last year's because of retirements of existing coal-fired generation resulting largely from environmental regulations which go into effect in 2015.” Northern Ohio is suffering from more forced coal-plant retirements than the rest of the region, hence the even higher price.


Michael Brune, executive director of the Sierra Club, an advocacy group fighting coal-fired power, said in an interview that the regulation shows that President Barack Obama is moving to a cleaner energy future.

"It's a strong move," Brune said. "It means there will never be another coal plant built without new technology and it probably means even those won't be built because they can't compete."

He's probably not going to get a lot of support from West Virginia this fall.


The coal industry will suffer the same fate as Osama bin Laden under new climate regulations proposed by the Environmental Protection Agency, the head of the United Mine Workers of America said this week.

Kudlow, CNBC, thinks this is absolute insanity, killing the coal industry for any number of reasons. He will have EPA representative on his show this evening (date of original post).
Posted by Bruce Oksol at 8:17 AM No comments:

Data points
Perfect storm (not noted in link above):

Posted by Bruce Oksol at 6:56 AM No comments:

Posted by Bruce Oksol at 6:34 AM No comments: