It was also reported this week that Trump won another court case, this time in the 4th Circuit Court regarding renting out rooms in his hotels to foreigners.

I am unable to keep up with all the "wins" Trump has had.

An e-mail I sent to someone much more knowledgable about the market than I am:


It would be interesting to see an analysis of the type of stocks that folks bought this week.

To some extent, one wonders if folks are finally getting tired of their returns in savings accounts at banks, money market accounts, bonds. Are folks finally throwing in the towel?

It would be interesting to see if the majority of money that went into the market bought growth stock (little to no dividend but hopes for great appreciation) or value stock (little volatility but safe dividends). [And, yes, I'm using an incorrect definition for growth/value stocks but one gets the idea of what I'm asking.]

The recurrent buzz seems to be that we are headed into a recession; if so, money going into the market this week should have favored value stock (or "safe" stock vs "more speculative" stock).

One way to sort that out, I suppose is to find some "value" mutual funds and some "growth" mutual funds. And see how they did this week.

If both "value" and "growth" did equally well, then it appears everyone simply threw darts at a dartboard.

Let's see what google has to say? The google phrase that was searched:

Disclaimer: this is not an investment site. Do not make any investment, financial, job, career, travel, or relationship decisions based on what you read here or what you think you may have read here.  I'm writing a bit more about the market today a) because all-time highs are being reached; b) for the archives to help put the Bakken into perspective; and, c) because I'm bored at the moment.

If I had a dime for every time I heard that US shale operators are struggling for free cash flow, I would have a lot of dimes.

To put that in perspective, Netflix has never, never, never had free cash flow. At least that's what I've heard. Next time someone asks whether I would invest in a particular stock, the first question I'm going to ask: what's the free cash flow. NOT!

A talking head said that COP was the "cheapest" Big Oil stock out there.

My retort: compared to what?

Disclaimer: see above.
Posted by Bruce Oksol at 4:20 PM No comments:

Let's see:
And the headline: the price of oil rises due to decline in rig count. Okay. 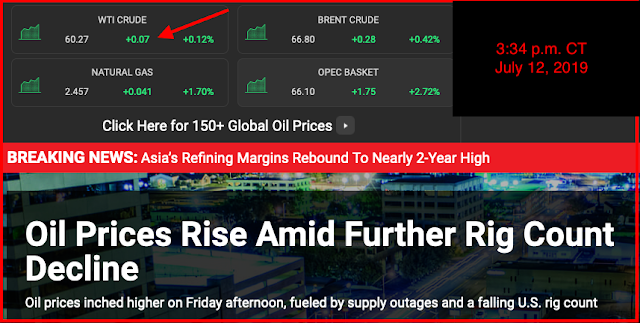 Going into the weekend, it appears to me that the price of oil was essentially flat despite many factors. A decline of four rigs week-over-week was meaningless in the big scheme of things.

Had oil dropped a penny, I guess the headline would have been: oil prices fall amid further rig count decline.

The worst piece of news that Epstein could have received today with regard to his hopes of being granted bail?

A cabinet member in the Trump administration resigning due to Epstein.

I can't imagine any judge risking his/her career by granting bail to Epstein. If a US cabinet member resigns in the space of 72 hours once the story broke, it can't be good news for Epstein.

Note: some good comments from a reader in the comment section below. I accidentally deleted one of the reader's comments but was able to copy it and post it as coming from me. It is noted in the comments below that that particular comment is from the reader although it is published by me. Sorry about that.

US equity markets. At the close, going into a weekend when anything can happen:
Shopping: I will buy Sophia a new pair of shoes over the weekend.

Royalties: ND Supreme Court sides with state in suit between state and Encana/Newfield over deductions from natural gas royalties.

For the number of days in the calculations below, I'm using "number of days" through Sunday, July 14, 2019, this weekend.

It's possible I have made simple arithmetic errors.

The number of permits issued each month by the NDIC may differ from what I have in my database, but if so, it will be very, very close, and won't affect the overall results.

One can check the above projections with the actual number of permits issued in North Dakota over the past several years at this site:
For newbies:
My hunch:
Thesis:
If I could only choose one metric to follow the Bakken, it would be the rate of change (increase/decrease) in number of permits on a monthly basis.

Having said that, even the number of permits issued each year is coming down, and production continues to rise.
Posted by Bruce Oksol at 2:27 PM 11 comments:

In an earlier post on coal, I suggested "the numbers don't add up."

It looks like, with today's news (the news coming out of Germany), there is more data / more information / more data points to suggest that "the numbers don't add up" is accurate.

I'm currently involved with family commitments but when I have time I will come back to this.

The four links that will be discussed:

Let's see if the market agrees.

CLNE: maybe, maybe not. Wow, CLNE has fallen off a cliff the past five years.

Disclaimer: this is not an investment site. Do not make any travel, job, career, investment, financial, or relationship decisions based on what you read here or what you think you may have read here.

From the EIA, link here:


On May 22, 2019 United Parcel Service (UPS), a global provider of shipping and delivery services, announced that the company would increase its use of renewable natural gas (RNG) in the United States. UPS purchased 170 million gasoline gallon equivalent (gge) from fuel supplier Clean Energy Fuels to meet this commitment, which supports UPS’s sustainability goals. RNG consumption has increased significantly in recent years, and according to UPS, this agreement will be the largest commitment to RNG to date by any company in the United States.

The sites are in the south and far west: 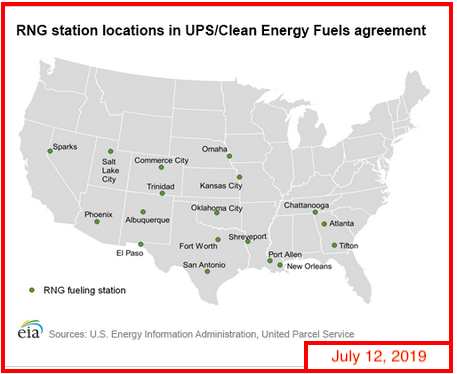 Wow, it seems like it's taking forever to get these NG corridors established. T. Boone Pickens has been at this since 1988.

Email ThisBlogThis!Share to TwitterShare to FacebookShare to Pinterest
Labels: NGCorridors

One older well showed a nice jump in production, but did not last particularly long:

This well has just come off line:
Other wells in the drilling unit:

This well has just come off- line:
Other wells in same drilling unit: 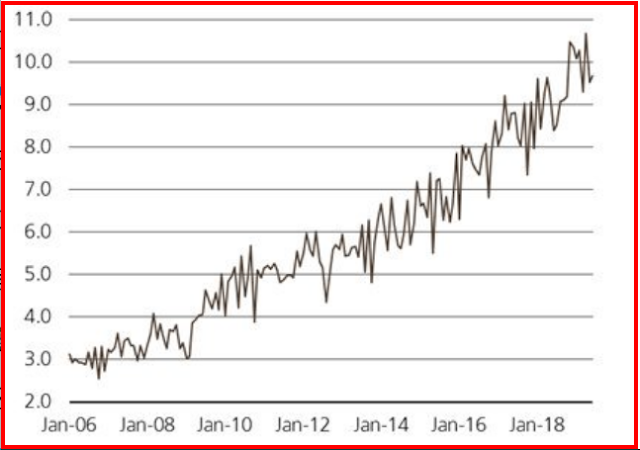 Futures:
Tesla: for the archives -- to see if this analysis is accurate --
Politics, new polls out (link here). I don't see any significant change over the next few months; everything points to a brokered convention. 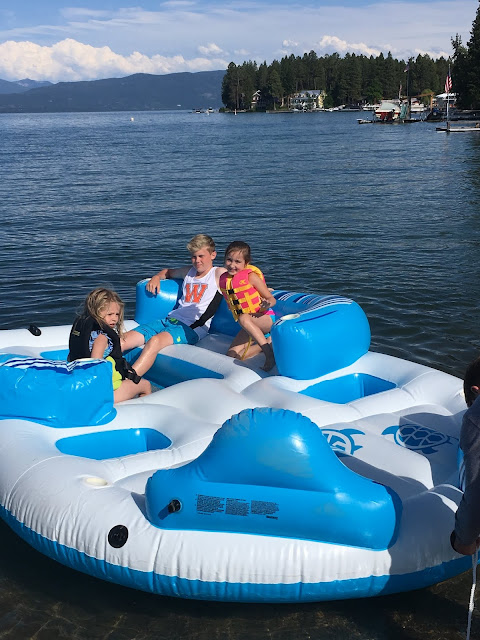 
RBN Energy: are E-fracks a fix for a Permian gas constraints and giveaway prices?


Persistent natural gas takeaway constraints out of the associated gas-rich Permian have pushed Waha Hub prices to between $1 and $9/MMBtu below the Henry Hub benchmark for most of 2019. Concerns about gas flaring have flared. Tanker trucks transporting diesel fuel to drilling and completion operations in West Texas and southeastern New Mexico are clogging the region’s roads. And diesel’s not cheap, especially if you’re using thousands of gallons of it a day. With Permian wells producing far more natural gas than takeaway pipelines can handle, and with gas essentially free for the taking, is this the year when electric fracs — hydraulic fracturing powered by very locally sourced gas — gain a foothold in the U.S.’s hottest shale play? Today, we look at the economic and other forces at play in the e-frac debate.

Last week, Waha basis averaged $2.25/MMBtu and the Henry Hub daily prices averaged $2.24/MMBtu — in other words, folks selling gas at the Waha Hub had to pay someone a penny per MMBtu to take the gas off their hands. This seemingly crazy situation has become all too common in the Permian in recent months. The issue is pipeline takeaway capacity — there’s simply not enough of it. And with Permian gas production now rising past the 10-Bcf/d mark, the only near-to-mid-term hopes are (1) that new pipeline capacity and gas demand will become available in Mexico (allowing more gas to flow south across the border); (2) that the next big gas pipeline from the Permian to the Texas Coast (Kinder Morgan’s Gulf Coast Express, or GCX) starts up a few weeks earlier than its promised October 2019 online date; or (3) that regulators continue to allow more gas flaring.

While the Permian produces extraordinary volumes of hydrocarbons — all that natural gas, plus more than 4 MMb/d of crude oil and lots of NGLs — it consumes a lot of energy too, mostly in the form of diesel fuel to power the trucks, drilling rigs, hydraulic fracturing pumps, compressors and other equipment needed to keep the oil patch humming. Refineries within or near the Permian meet a portion of the region’s diesel needs, but rising demand for the fuel has been spurring the development of new infrastructure — and the repurposing of existing assets — to bring additional fuel into the Permian from refineries along the Gulf Coast.