With regard to the Hillary Clinton, I discussed the seven stages of grief back on February 17, 2017.

The seven stages of grief:

I honestly thought Hillary Clinton had moved on to "anger" (she never experienced "guilt") but after the recent Hillary interview at the Recode Conference, it's clear that Hillary is either still at the "denial"stage or more likely, she's entered a previously undefined stage from which she will never emerge, namely "delusional."

I never understood the three legs of the Paris Climate Accord but after listening to President Trump today, I finally understood. The accord was to last 13 years, during which,
.... and Bob Iger is upset that Trump walked? I can't make this stuff up.

Magnolia Petroleum PLC To Participate With Marathon In The Bakken -- June 1, 2017

Disclaimer: this is not an investment site. I have no interest in Magnolia except as a way to learn more about the Bakken. A reader sent me the link to the press release.

This is an interesting press release by Magnolia Petroleum PLC, riding the coattails of Marathon Oil at this link: Magnolia will participate in six new MRO wells.


All six wells have low exploration risk thanks to being located on or close to prolific producing units.

The new Marathon wells, which include two to be drilled to the Bakken and four to the Three Forks Sanish, will be drilled on the same spacing unit as two highly productive Bakken completions in Dunn County, North Dakota in which Magnolia has an interest in:

The six new wells are in line with management’s strategy to minimise exploration risk - this includes the evaluation of drilling data gained by Magnolia through its participation in wells in which it has very small interest.

And the press release goes on; of interest to newbies; not much new for long-term readers.

Back in 2011, I put together a list of MRO wells that might be candidates for re-fracking. #17797 was not on the list, but it was re-fracked in 1/15:
Production around time well was re-fracked: 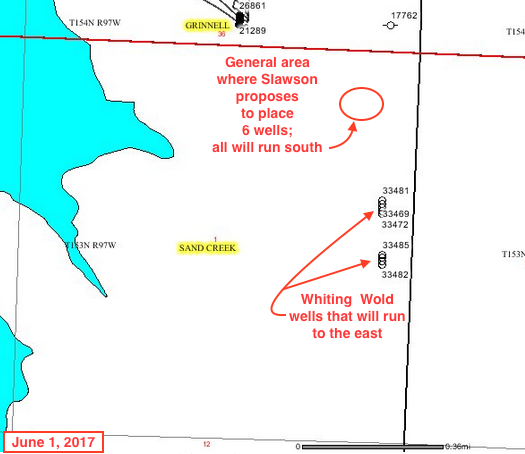 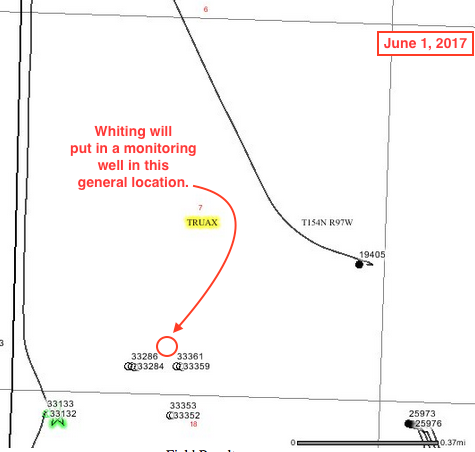 
Until yesterday's speech by President Trump pulling out of the Paris climate accord I had forgotten about the "Green Fund." I thought the "Green Fund" was a euphemism for some slush fund; then forgot all about it after reading this article just before President Obama left office. Imagine: transferring a half-billion dollars just before leaving office, no Congressional oversight, to some South Korea oligarchy, no accountability. George Washington, who always short of funds to pay his troops, must be rolling in his grave. No matter how little Trump gets accomplished with regard to tax reform, the good news is that had he not won, Hillary would be doing what Obama did -- but much more. From the linked article:


Barack Obama has heeded calls to help secure the future of the historic Paris agreement by transferring a second $500m instalment to the Green Climate Fund, just three days before he leaves office.

The fund was a key aspect of the Paris agreement signed in 2015, which aims to keep global warming “well below” 2C and aspires to keep warming to 1.5C.

Established in 2010, it is financed by wealthy countries and used to assist developing countries with adaptation and mitigation. It was widely seen as a key measure to bring both rich and poor countries to the negotiating table.

US is out of the Paris climate accord.

5 minutes before the announcement scheduled time of press conference, 2:55 p.m. Central Time:
Talking heads stress that there are only two countries in the world that did not "ratify" the Paris agreement.

For the media, it appears the big question: will Ivanka be present? [Apparently not.]

Now that the talking points are out (2:00 p.m. Central Time) the only question is how he "threads the needle."

The most concerning: Elon Musk says he will leave White House economic councils if Trump does not support the Paris climate agreement.

POTUS arrives at 2:33 p.m. (Central Time): now we see why there was a delay -- the Manila airport terrorist attack earlier today. The press completely missed that. President Trump runs through a long list of "making America great again."

During the announcement (2:41 p.m. Central Time):
The announcement: "will withdraw from the Paris climate accord" .... huge clapping ... "but begin negotiations to re-enter the Paris accord .... if fair to Americans."

Forget all the emotional baggage tied up with the Paris climate accord, listen to the reasons Trump left the accord. It had very, very little to do with emotion or the environment.

Jared Kushner and Ivanka Trump not in the Rose Garden during the speech. Steve Bannon was there, in the front row.

Elon Musk was first.
Bob Iger was second. (And it may have nothing to do with the climate issue; in a rare slowdown in one of the hottest areas of the entertainment business, attendance declined at 13 of 14 Disney theme parks around the world in 2016 compared with 2015, according to an independent report released on Thursday. Higher prices, intended in part to ease crowding at certain parks, were a major contributor.)
Kathy Griffin.

I wonder how many people realized $100 trillion for .2 degree centigrade in 83 years ... my beef with financial deal was India (allowed to double coal usage) and China was exempt for 13 more years.

I was completely unaware of the "Green Fund" -- essentially a transfer of wealth from the US to 3rd world countries, to whom we already give a huge amount of foreign aid.

France, Italy, and Germany says deal can't be renegotiated. -- report on CNBC. If the #1 emitter of CO2 walks away but offers to renegotiate, and yet FIG says it can't be renegotiated ... the "accord" that would have saved the world .... this tells me all I need to know about how important this "accord" really was. If this "accord" was that important, and if US walked away, it should have been important enough to renegotiate --- to make it better. And fair to everyone.
Posted by Bruce Oksol at 1:53 PM No comments:

Saudi crude oil import into the US. Most recent data just posted. 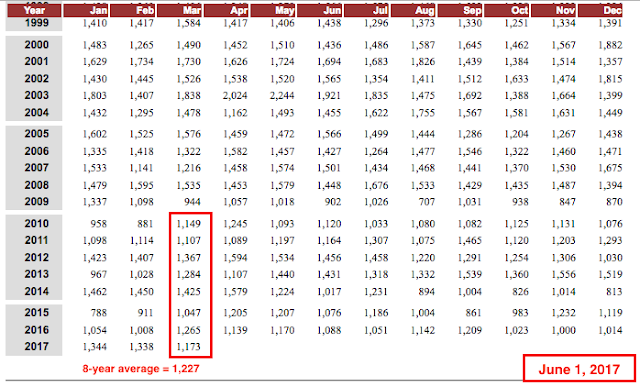 Off The Net For Awhile -- Unfortunately I'm Going To Miss Some Breaking Stories -- June 1, 2017

See you later this afternoon.

Stories to come back to later, sent in my readers, thank you.

Democrats: getting too rich? NY Times.

Auto sales: pending.
Hostile power? That's what Soros says about US with regard to the EU.

The deal will be in cash and establish Deere’s “leadership position” in the road building industry and expand the reach of John Deere construction equipment, according to a statement from the company. Wirtgen, a privately held company, has about 8,000 employees and sells products in more than 100 countries.
“Spending on road construction and transportation projects has grown at a faster rate than the overall construction industry and tends to be less cyclical,” Max Guinn, president of Deere’s worldwide construction and forestry division, said in the statement.

Black swan. Has the black swan landed? Energy Intelligence.
Posted by Bruce Oksol at 11:14 AM No comments:


RBN Energy: where refiners are allocating their 2017 CAPEX dollars.