These are great articles, albeit from a different time when oil was $100/bbl. I am surprised these are still available, not behind a paywall. One may want to archive them before they are lost. Both articles are now archived.

Follow-up: the compact fluorescent lights, a set of four, arrived today, from Amazon.com, less than two days after they were ordered, and in perfect condition. Color me impressed.

A bulb burned out in our 1,000-square-foot hovel. When I removed the lighting fixture, it turned out to be one of the LED bulbs that the utility companies were pushing down our throats ten years ago, or whenever it was. [Later: see first comment. This is not an LED. It's a CFL. How come I didn't know that?] 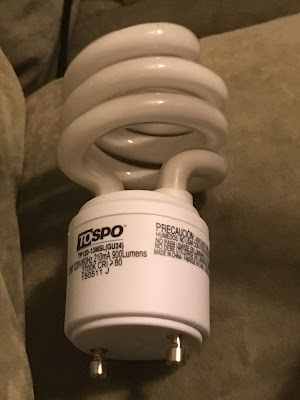 I grabbed the bulb and rode my bicycle down to Lowe's earlier this evening. No luck. They didn't have the bulb. On the way home I stopped at a Super Target. [For some reason, I now always associate Target stores with Ill-Hand Omar but that's another story for another time.]

Back to the bulb. Back to Target. Same story. They did not have the funky bulb either. Both Target and Lowe's were well stocked with the standard screw-in bulbs, but none of the bulbs as shown above.

I rode my bike home, got on Amazon.com, and within ten seconds found the bulb. I ordered a pack of four, and it didn't cost a penny -- "cash back" on the Amazon Visa card paid for everything. The bulb will be here Monday, in two days.

This is why I don't watch college football any more. Scores from today according to a google search:

I guess there was one good game:

This well was drilled back in 2011. Less than ten years later it has produced in excess of one million bbls of crude oil and is still going strong.

Other wells on that pad:
The graphics: 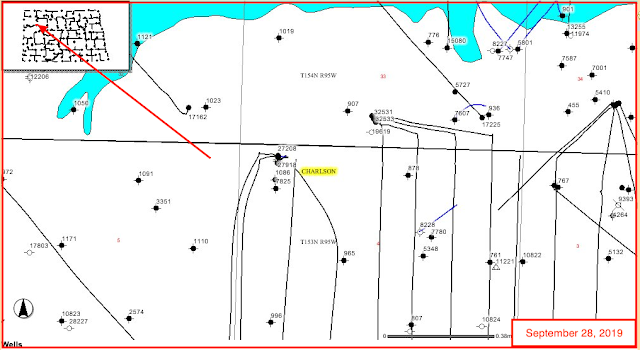 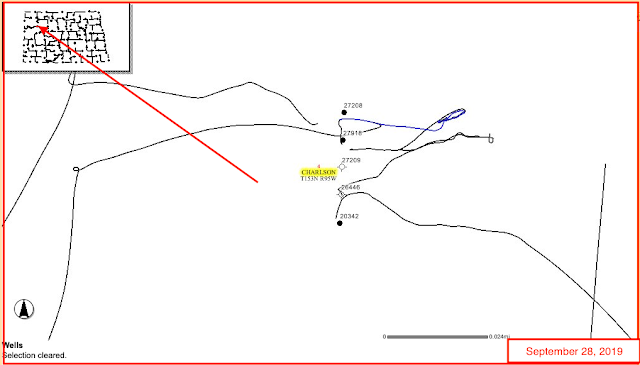 Again, for newbies, these jumps in production:
Here's another one.

I only post the summary of the agenda for the monthly NDIC hearing dockets to simply give me an idea of where the Bakken is headed. It is not posted as a source of information to follow any more specifically than that, if that makes sense. The summary is done quickly; in "shorthand"; and I do not listen to the audio when the cases are heard, nor do I follow up with the results.

But I am curious. Maybe a reader can explain this.

It's possible I'm misreading something again, but I've looked at it several time. I would imagine the October case will supersede the September case, but perhaps a reader can explain the difference.

On another note, other recent "large" CLR cases:
With regard to the subject line suggesting that CLR is "tweaking its business model" I don't have time to go into that now, but it certainly seems CLR is doing something a bit different starting the second half of calendar year 2019. If so, Harold Hamm has telegraphed that several times, either in interviews, or company press releases, or corporate presentations. I am way out in front of my headlights but it gives us something to talk about. 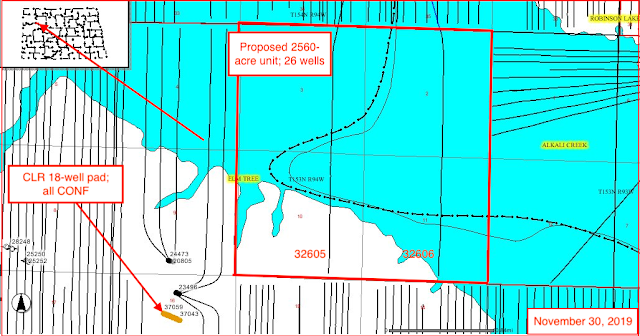 Disclaimer: I often make typographical and/or factual errors. If this is important to you go to the source.  It is more apt to occur in a long note like this.

T: this story was a bit misleading. Completely accurate but misleading. Early in the story, the writer says that the  4th-quarter-51-cent-dividend represents a 2% increase from the 4th quarter one year earlier. That's true, but the dividend was actually raised a quarter or two earlier this year.

PDX: a lot of folks suggest shale operators are losing money. But there are some paying a dividend. And some are increasing their dividends. I completely missed this because I don't follow the Permian closely, but back on August 6, 2019, it was reported that Pioneer Natural Resources announced a hefty increase in its quarterly dividend.


... an increase in the Company’s cash dividend to a quarterly amount of $0.44 per common share (equivalent to $1.76 per share on an annualized basis as compared to $0.64 per share previously). The quarterly dividend of $0.44 is payable October 10, 2019, to stockholders of record at the close of business on September 27, 2019 .... that was yesterday. Sorry for the late notice.


Unlike many other operators in the Permian Basin, Pioneer steered clear of downspacing issues, primarily due to the amount of choice acreage it has in the region.

Downspacing is the method of drilling wells closer together in a particular area to maximize output. The pure-play Permian basin producer has operations across 680,000 net acres in the Midland Basin. While its peers have well spacing of less than or equal to 600 feet, Pioneer’s wells are situated 850 feet away from each other.

In 2019, the company intends to drill and produce 265-290 wells in the region compared with 270 wells drilled last year.

Moreover, the upstream energy player expects Permian production through 2019 in the band of 320-335 thousand barrels of oil equivalent per day (MBoE/D), higher than 319.9 MBoE/D a year ago.

Pioneer expects to operate an average of 21-23 rigs this year, from which it will likely generate free cash flow of $600 million.

This is expected to help the company to continue increasing quarterly dividends. Notably, it has managed to increase annualized dividend by roughly 2100% over the past few years.

Markedly, of the authorized $2-billion share buyback program, the company has executed $528 million of repurchases.

PDX, comments on previous note. I find that note on Pioneer Natural Resources staggering. This is hyperbole, but not much: to some extent, PDX is coming close to doing in the Permian almost a third or a fourth of what the entire Bakken is doing (again, very, very general comments; very, very rough data follows, in some cases but it helps me put PDX in perspective: