Price declines were exacerbated by the decision last year by OPEC, the 12-member producer group led by Saudi Arabia, not to cut production. Still, OPEC's Secretary General Abdalla Salem El-Badri said OPEC had been a bastion of stability amid volatile times for the oil industry.

"The supply and demand balance in 2015 has been one of oversupply, with stock levels rising to well above the five-year average. Despite this market instability, OPEC has continued to be an efficient, reliable and economic supplier of oil," El-Badri noted in the foreword of report. Later in the report El-Badri talks about el-unicorns. 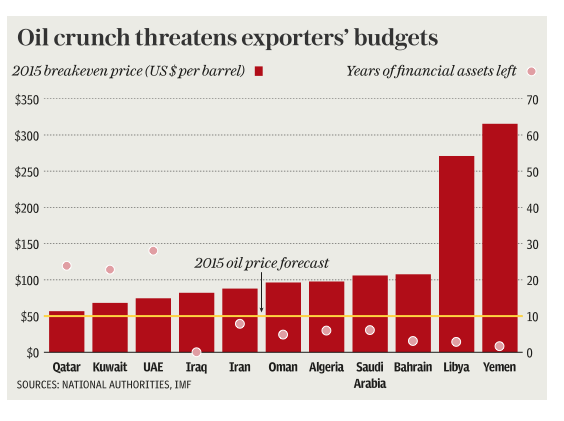 By the way, look at the "break-even" price for Saudi Arabia -- that was less than 18 months ago -- and not a whole lot has changed, regardless of what Prince Salman says. Note the "years of financial assets left." Staggering. Yemen is already broke (duh). Libya has a couple years left. Bahrain? Toast. Saudi Arabia: less than ten years. I could outlive Saudi's financial reserves. LOL.
Posted by Bruce Oksol at 7:49 PM No comments: 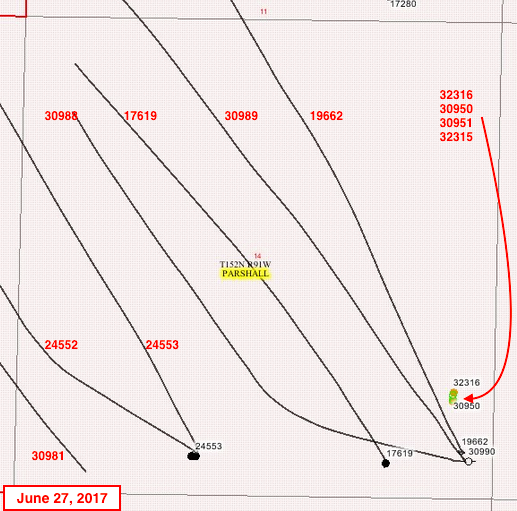 
1) Pioneer Natural Resources sees Saudi Arabia cutting oil production to lift prices -- but [Pioneer NatRes ] won't cut its own ... 2) oil industry's history and problem in a nutshell: someone must cut but not me ... 3) oil market doesn't care who cuts production but prices will continue to drop until someone does cut and supply growth is brought back into line with demand.

John fails to mention:
Isn't this what free market capitalism all about: prices will continue to drop as long as supply outpaces demand? Would one prefer the alternative, a cartel?

Oil industry's history and problem in a nutshell: someone must cut but not me. Really? I am not aware of many times in history when there was a glut of oil coming to the market.

A couple other points: why would Pioneer Natural Resources cut production if the company is making money or meeting contractual requirements? The current price of oil - supply - demand dilemma may be an existential problem for some/many/all US oil companies, but the current price of oil - supply - demand is not an existential problem for the United States. In fact, in many ways, cheap oil is great for much of the US.

Saudi Arabia has a different kind of problem. For Saudi Arabia, the price of oil translates to an existential problem for the kingdom. Not so long ago the Kingdom based its budget on $100 oil. The kingdom was able to accept $80 oil but $60 oil is of great concern. Beyond the pale: $40 oil. Saudi cannot survive at $40 oil; it appears many US oil companies will do just fine on $40 oil. Not great, but fine.

From Bloomberg via Rigzone: Canada M&A hits decade-high as foreign owners flee oil sands (Mr Kemp may have not gotten the memo (see his tweets above). From the linked article:


Mergers and acquisitions in Canada are set for the strongest start in a decade as foreigners sell their oil sands investments.

There have been about $132 billion of transactions recorded this year, the highest since $156.5 billion in the first half of 2007.

Local companies snapped up these energy assets, boosting domestic M&A to a record. ConocoPhillips and Royal Dutch Shell Plc are leading the exodus amid a bear market for crude.

However, Canadian producers are responding by pumping money into oil deposits in the remote boreal forests, which trail only Saudi Arabia and Venezuela in proved reserves but are more expensive to extract.


US gasoline markets are robust as the summer driving season continues, but several forces could lead to an octane shortage, speakers warned during a June 26 breakout session at the US Energy Information Administration’s 2017 Annual Conference.

Automakers could rely on engine designs with higher compression ratios to comply with more-stringent fuel economy standards, speakers said. In turn, this would require gasoline with higher octane ratings. “Ironically, we’re not going to be using more fuel in the US in the next 5 years, but we’ll need more octane, at least until more cars run on electricity,” said Tom Kloza, global head of energy analysis at Oil Price Information Service, a division of IHS.

Kloza characterized current US gasoline markets as sloppy, with product exports coming to many refiners’ rescue. “But nearly all the growth in this country’s oil production is light crude which has a lot of condensate with naphtha that requires the addition of expensive octane enhances,” Kloza said. “If super turbocharged engines represent 25% of the US fleet in 2025, there will be some big changes coming.”

Much more at the link.
Posted by Bruce Oksol at 1:48 PM No comments:

Schadenfreude: anyone affected by the most recent ransomware virus that is currently spreading globally has no one to blame but themselves. This is a repeat of a similar attack just a few months ago. As a disbarred president once said, "fool me once, shame on you; fool me twice, shame on me."
The ransomware could have been avoided two ways, one easy, one a bit more expensive:
Senate health care: I don't have a dog in this fight, at least not directly. I would prefer to let ObamaCare run its expected course; for the GOP to get involved is a huge gamble. But if it's important to President Trump, he should spare no expense in spending whatever money it takes to "buy" the five or six or seven or eight "hold-out" Republicans. In fact, just for fun, he should dangle a few billion dollars in front of some senators from blue states just to see if they would be willing to sell out. LOL. One can assume if the shoe were on the other foot, if Hillary were in office with a "do-or-die" bill, money would be no object. [Update: after posting the above about three hours ago, I now see a story along the very same line: Republicans eye billions in side deals to win Obamacare repeal votes. GOP learning lessons from the Dems: "never let a crisis go to waste." GOP senators won the 2016 election; now they get the "spoils." Billions of dollars worth of spoils.]

Senate health care: in his conversations with the five or six or seven or eight "hold-out" Republicans, President Trump should also tell these senators that once the bill is passed, they can offer amendments to other spending bills to undo those portions of the health care act they don't like. Plus get a few billion dollars for their own states.
Posted by Bruce Oksol at 1:30 PM No comments: 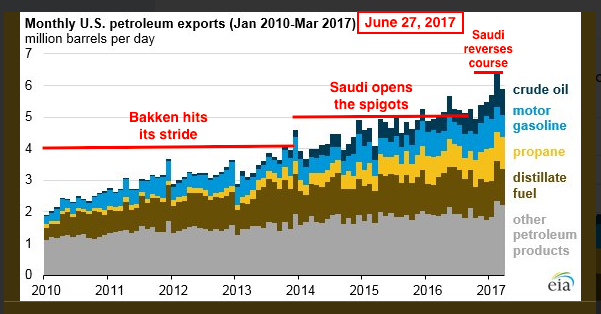 The only problem with this graph is that it starts in 2010. EIA should have started the graph in 2000 or at least 2008, but I guess the "Deep State" really, really doesn't want to embarrass President Obama. The graph starts in 2010, three years after the North Dakota Bakken boom began (2007). The Montana Bakken mini-boom began in 2000.

This is the graph that the "Deep State" does not want to show:

Most interesting to me is that the brightest thinker in Washington failed to notice in 2012 that exports were already increasing significantly. Interestingly, note how exports then leveled off for the next two years of the Obama presidency before increasing again.

It should be noted that the US is unlikely to ever export any energy generated by wind or solar. At least not in my lifetime.
Posted by Bruce Oksol at 11:56 AM No comments:

This might be a long note. It might be confusing. The note is fairly long; there are likely to be factual and typographical errors. I may be missing something or misreading something. If this information is important to you, go to the source. I consider this post not really ready for prime time, perhaps something to come back to later.

This is simply a meandering note on an observation in Sand Creek while things are quiet, waiting for the day's new cycle to begin.

This is how it started. I was updating BR's Hammerhead #20812 in Sand Creek.

I was mostly interested in the jump in production of #20812 after a "workover" which happened to coincide with fracking of neighboring wells.

In the process I noted that #20812 was recently taken off-line again. I was wondering if something might be happening in the area.

So, we'll stop there for a moment.

One of the Rolfsrud wells had a small bump in production, coinciding with the well being placed on a pump:

As noted when I started, not much to learn, just some observations.
Posted by Bruce Oksol at 8:21 AM No comments:


RBN Energy: after a long night, gas-weighted US E&Ps see a new dawn of profitability.

Summer: height of driving season; oil and gasoline glut; oil around $44. Come this fall, the US driving season ends, demand drops, but oil production is likely to maintain or even increase ... current floor for some seems to be $37 to $43.
Posted by Bruce Oksol at 7:28 AM No comments: