Older Americans can access more than 84 million acres of land protected by the National Park Service for the rest of their lives for just $10 — but not for long.

The National Park Service's lifetime pass will be eight times more expensive soon — costing $80 for American citizens who are older than 62. And while it is unclear when the price surge will take effect, this week — National Park Week — offers a good opportunity to remind older Americans to purchase their passes before it's too late.

The agency offers a variety of passes for Americans, as 137 of its sites charge for admission. Seniors can still get the lifetime passes for $10 in person, or pay an additional $10 for processing fees to get it online.

Despite the price increase coming soon for seniors, the lifetime access to parks around the country is still a steal, according to an NPS spokeswoman.

At $10 for a Senior Pass, the deal is so good, I bought a pass for each car. They hang on the rear-view mirror 24/7. One never knows when one will be near a national park.


Ford Motor Co. aims to cut about 10% of its global workforce amid Chief Executive Officer Mark Fields’s drive to boost profits and the auto maker’s sliding stock price, according to people briefed on the plan.

The move comes as Ford targets $3 billion in cost reductions for 2017, a plan intended to improve profitability in 2018 even as U.S. auto sales plateau. Ford’s share price has suffered during Mr. Fields’s three-year tenure, and the company’s market value has slipped far behind those of Tesla Inc. and General Motors Co.

The job cuts, expected to be outlined as early as this week, largely target salaried employees, these people said. It is unclear if the plan includes reductions in the hourly workforce at Ford’s factories in the U.S. and abroad. Ford has 200,000 employees globally, half of which work in North America.


North Dakota's breakeven price for crude production averaged $24/b in the first quarter of 2017, with the breakeven in the state's most active county averaging $21/b, according to estimates from the state's Department of Mineral Resources.

The breakeven price puts the Bakken Shale play in economic competition with nearly any play in the world, including Saudi Arabia, but analysts caution that the latest data out of North Dakota may not be telling the whole story of what drillers are seeing there.

"These numbers don't make that much sense to me," said Graham Walker, an oil market analyst with Petrologica. "It's very much an art, these breakeven prices. There are so many factors you can include or not include."

Walker said that, when calculating their breakeven prices, North Dakota officials may be including only sanctioned wells, or only wells that are successfully completed and put on production while ignoring unsuccessful attempts. Rather than a point where wells make money, the state's breakeven price may be a threshold that needs to be maintained before a well is shut in.

Walker pointed to McLean County in the central portion of the state, where there were no rigs and only 64 wells capable of producing in Q1. The state estimated that the breakeven price in McLean was $17/b.
"If it's $17/b in McLean, where is everybody?" Walker asked.

During a press briefing Friday, Lynn Helms, the state's top oil and gas regulator, said that the $17/b figure represents the relatively small sample size of the producing wells in the region, particularly three highly successful wells that are "pushing the limits" of drilling technology.

"We're a bit at the mercy of statistics," Helms said.

Alison Ritter, a spokeswoman for the state agency, declined to comment further Monday on how the state determines breakeven prices.

The GDPNow model forecast for real GDP growth (seasonally adjusted annual rate) in the second quarter of 2017 is 3.6 percent on May 12, unchanged from May 9.

The forecast for second-quarter real government spending growth fell from 0.1 percent to -0.4 percent following the Monthly Treasury Statement issued yesterday by the U.S. Bureau of the Fiscal Service.

Trump has been in office less than 150 days -- just a reminder:


The number of Americans drawing unemployment benefits dropped to its lowest level in 28 years in April. Not since 1988 have unemployment claims been so low.

Illegal crossings at the southern border have plummeted.

US Coast Guard has reported no rescues at sea from Cuba, the Caribbean for quite some time.

Interesting, huh?
Posted by Bruce Oksol at 1:13 PM No comments:

When our older daughter and family lived in Boston a few years ago, they would go skiing on Mount Washington every winter.

It turns out that global warming extended the ski season this year. More than six (6) inches of snow fell on Mount Washington, New Hampshire, on Mother's Day, this past weekend.

If the Kennedy Klan wasn't already out west skiing where there has been record snofall this year, the ski bums won't have far to go, from Boston to Mount Washington.

Apparently more than 1,000 NH residences remain without power the day after the storm. Once the wind turbines start turning and the clouds move out of the way to heat the solar farms, everything should work out fine.
Posted by Bruce Oksol at 1:11 PM No comments:


Brad Grey, the former Paramount Pictures chairman and CEO, died on Sunday night of cancer. He was 59.

In addition to running Paramount for 12 years, Grey helped transform Brillstein-Grey Entertainment into one of Hollywood’s most successful management and production companies, playing a key role in the development of “The Sopranos” and “The Larry Sanders Show.” He also co-founded Plan B Entertainment with Brad Pitt and Jennifer Aniston, through which he produced the Oscar-winning “The Departed.”

In lieu of flowers, the family asks that donations be made to the Lawrence J. Ellison Institute for Transformative Medicine of USC.

From the Ellison Institute:


Lawrence J. Ellison is an American businessman, sports enthusiast, and philanthropist best known as the founder of Oracle Corporation, the enterprise-technology giant he launched in 1977. In 2014, after serving as Oracle’s CEO for 37 years, Mr. Ellison stepped aside as CEO to become Executive Chairman and Chief Technology Officer.

Fracking solutions in the Bakken: of the 72 most recent wells that have come off the confidential list, not including any completed DUCs:

Disclaimer: this is not an investment site. Do not make any investment, financial, job, relationship, or travel plans based on what you read here or think you may have read here. If this stuff is important to you, go to the source.

Mid-day trading: both the Nasdaq and the S&P 500 hit new record highs.

Futures looking good. Up 54 points about an hour before the opening. It could be a wild day on Wall Street. Already futures suggest some new records will be set. AAPL could set a new record. I think one can learn a lot by looking at companies whose shares fall on a strong day on Wall Street, and those companies whose shares rise on a bad day for Wall Street. With futures looking to rise today, what is Tesla doing? Down over 2% in pre-trading, losing over $7 on a $320-stock.

WTI vs Brent: with price of oil "surging," it's important to watch the "oil" that one is referencing. I saw a headline that said "oil" surged to over $52. Considering a week ago "oil" was as low as $43 that's quite a surge. In fact, the former was Brent, the latter was WTI. The drop to $43 was also due to a "flash crash" that most folks did not notice, happening overnight in the states. The "oil" that is over $52 today is Brent oil; WTI is up almost 4% but still below $50 ($49.55). Regardless, WTI looks like it's headed back to the sweet spot: trading in a range between $50 and $55.


Distillate exports from Central Atlantic states totaled more than 103,000 barrels per day (b/d) in February, a record high for the month.

Distillate fuel is usually imported into the Northeast during the winter months because 22% of households in the Northeast use distillate fuel for home heating, a higher proportion than in any other U.S. region. However, because temperatures were warmer than normal in February 2017, domestic demand was relatively low.

Nearly all of the gasoline exports from Central Atlantic states went to countries in Africa. --- EIA 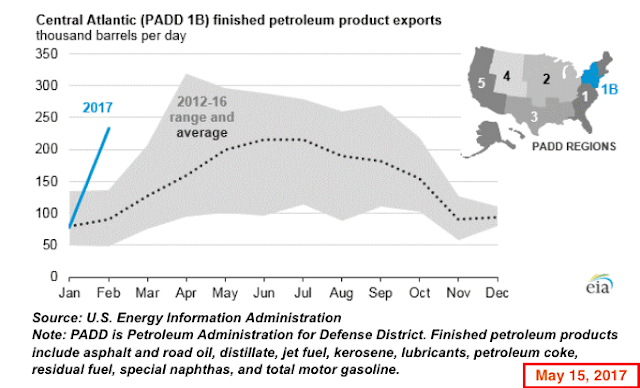 Not Lewis and Clark, but Lewis versus Clarke. US Supreme Court doesn't buy into sovereign nation defense when Native Americans are off the reservation.

Ransomware: Windows XP. A patch available. NSA had the vulnerability identified. Huge problems in Asia and Russia; unless something happens today, interestingly US virtually untouched. Except for FedEx. Windows XP: released in 2001. Microsoft quit selling Windows XP licenses in 2008 except for netbooks (2010). XP's successor Windows Vista was generally panned by reviewers and users which probably slowed the "demise" of XP. Windows 7 finally overtook XP in total market share by the end of 2011.


Interestingly enough, according to wiki, as of November 2016, Windows XP desktop market share makes it the fourth most popular Windows version after Windows 7, Windows 10 and Windows 8.1. Windows XP is still very popular in some countries; Africa as a whole and in Asia, e.g. in China, with it running on one third of desktop computers (and highest ranked in North Korea).