This was a data point from this week's update on the Permian:


EOG estimates well costs at $11.5 million/well; hopes to get costs down to $6.8 million/well this year (compare with Bakken which is clearly in the $7 million/well range).

That well cost comparison goes along nicely with this EIA analysis (a huge "thank you" to a reader for spotting this): 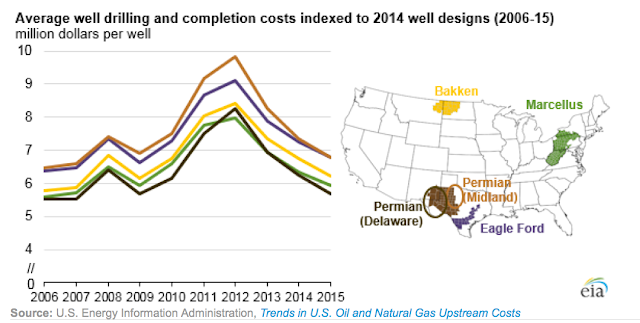 The "blue" and the "black" might be a bit hard to read. I believe "blue" is the Eagle Ford and "black" is the Permian (Delaware).

I am only interested in comparing "oil" basins, not "gas" basins. Therefore, throw out the Marcellus (green) line.

When the Marcellus, a "gas" play is thrown out, the Bakken is the second lowest; beat only by the Permian (Delaware). But for cost, the Bakken clearly beats the Permian (Midland) and the Eagle Ford, and not by a trivial amount. It's too bad the Bakken is so dependent on costly CBR.
Posted by Bruce Oksol at 10:59 PM No comments:

Email ThisBlogThis!Share to TwitterShare to FacebookShare to Pinterest
Labels: DrillingCosts

Insanity
Uber is top threat to oil -- Gartman
Posted by Bruce Oksol at 10:42 PM No comments: 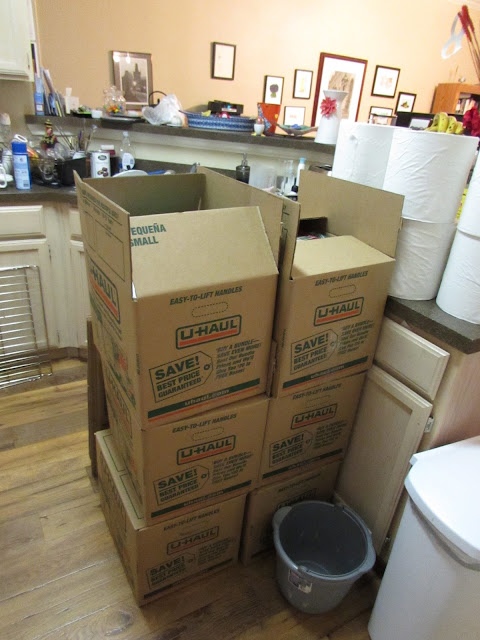 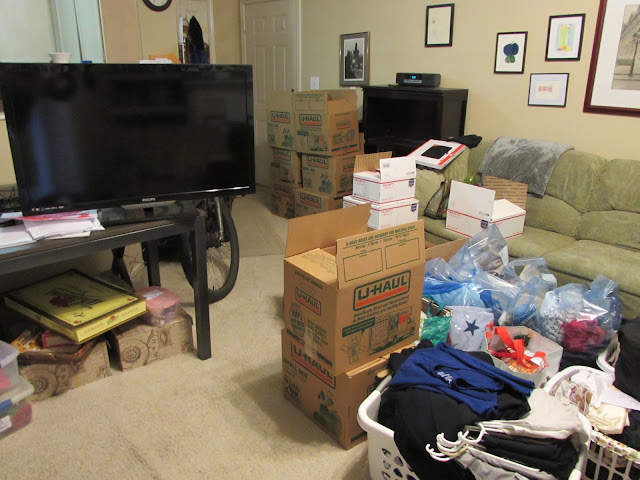 April 6, 2016: it took awhile, but The Los Angeles Times finally noted the same thing -- not all Tesla owners will get the tax credits. This is a non-story. Hillary will be elected president, and to be re-elected, she will pander to Californians and eliminate the 200,000 car sales threshold. It's a non-story.

Tesla: was it just me, or was the Tesla event last night underwhelming? Whatever. Tesla says it has 135,000 orders for the $35,000 mass-produced Model 3 that will get 215+ miles on a single charge. Delivery date: "next year." Meanwhile CNBC is reporting that Tesla short interest has hit a record high:


Twenty five percent of all Tesla shares are out on loan, according to data from Markit, figures the firm uses as an indication of short selling. Short selling occurs when traders bet that the share price will fall. Markit highlighted that short interest is now at an all-time high for Tesla since its IPO in 2010.

"Doubts have been raised about Tesla's ability to profitably crack the mass market especially since the company has so far been unable to deliver an operating profit on its current line-up of higher-end cars," [said one analyst].

"Tesla's short interest is nearly twice that of the second most shorted, Harley-Davidson, which has 14 percent of its shares currently shorted."

Underwhelming. I guess I wasn't the only one underwhelmed. Michael Hiltzik, over at The Los Angeles Times, covered the hype as well as anyone. Tesla hype watch: You know the Model 3 doesn't exist yet, right?


First of all, the Model 3 doesn't exist yet, neither in a final production version or actually in production. Nor will it be reaching the road any time soon. During the introductory event Thursday, Musk said he felt "fairly confident" that deliveries would start by the end of 2017. But no guarantees. [I watched the streaming event "live" - Musk certainly did sound like the car would be ready by the "deadline."]

Customers may not be eligible for tax credits. Among the forces behind the acceptance of electric cars are government credits, including an IRS credit of up to $7,500  for Tesla vehicles such as the Model 3. The problem is that those credits start to disappear once a manufacturer has delivered 200,000 electric vehicles. That may well happen before the first Model 3's are placed in customers' hands; given Tesla's production forecasts for its Model X and Model S luxury cars, it's almost certain to happen very soon after Model 3 deliveries start. So calculations that the real list price of the new car is a competitive $27,500 rather than $35,000 may be way off.  ["Way off" seems a bit harsh; spreading the cost over 6 years will minimize the delta in monthly payments whether it's $27.K or $35K.

And finally, financial health:  According to its annual report, Tesla roared through its cash last year to the tune of more than $700 million, leaving it with less than $1.2 billion cash on hand when Musk was projecting $1.5 billion in capital expenditures on the horizon.


Forget about old grudge matches like Chevrolet vs. Ford or Honda vs. Toyota. The fight brewing between General Motors and Tesla Motors is shaping up to be nastier. Both will soon be going after the customer who can spend $30,000 or more on an electric car, as GM launches the Chevy Bolt at the end of this year and Tesla begins selling the Model 3 in 2017. GM showed off the Bolt in January, and Tesla will unveil the Model 3 on March 31.


Like the prior program of income-tax credits for purchase of a hybrid-electric car, which ended several years ago, there's a cap on how many cars from each maker qualify for the credits.

But whereas hybrids were capped at 60,000 vehicles per carmaker, plug-in vehicles have a higher cap: 200,000 cars per manufacturer.

That applies to sales in the United States only, and once that number is achieved, the credits start to phase out over a one-year period starting in the second quarter after that total is reached.

For two quarters, the credit is halved; for a third quarter, it is set at 25 percent of the original amount. Then, it's done.

Some automakers are getting close: Nissan is one of them.

that qualify for a Federal income-tax credit of $7,500.

Auto sales for March: pending -- will be updated as data comes in -- at bottom of this post. MediaPost is anticipating --


Although indications show demand for new cars is weakening, automakers are poised to reach their highest monthly sales volume in 10 years.

New-vehicle sales are expected to rise 8% year-over-year to 1.66 million units in March, according to Kelley Blue Book, resulting in an estimated 17.2 million seasonally adjusted annual rate.

Fiat Chrysler could have the best month, with double-digit growth expected in March. The largest year-over-year improvements will be from Dodge Grand Caravan and Chrysler Town & Country minivans. The Jeep brand also should post another record in March with year-over-year strength headlined by the Renegade.

[Analysts anticipate] that American Honda will report double-digit growth in March, led by the new Civic. In addition, the new HR-V continues to perform well and collect industry awards, including Kelley Blue Book’s 5-Year Cost to Own Award. Meanwhile, the Honda Pilot is one of the fastest-selling models this month, averaging just 18 days in dealer inventory.


Analysts forecast that auto sales rose at an annualized rate of 17.3 million.

This would be down from the pace of 17.54 million recorded last month. And already, some analysts are debating over whether the pace of auto sales has peaked, following the best-ever year recorded in 2015.

Barclays' Brian Johnson is betting that the seasonally adjusted annual rate of sales has peaked "with an impending decline". But this could be delayed by the availability of auto credit, and strong consumer spending.


Nonfarm payrolls increased 215,000 for the month of March. Data for January and February was revised slightly down to show 1,000 fewer jobs created than previously reported.

Average hourly earnings increased seven cents. While the unemployment rate rose to 5.0 percent from an eight-year low of 4.9 percent, it was because more Americans continued to return to the labor force, a sign of confidence in the jobs market.


The GDPNow model forecast for real GDP growth (seasonally adjusted annual rate) in the first quarter of 2016 is 0.7 percent on April 1, up from 0.6 percent on March 28. After this morning's construction spending release from the U.S. Census Bureau, the forecast for first-quarter real residential investment growth increased from 7.8 percent to 9.1 percent while the forecast for real nonresidential structures investment growth increased from -9.3 percent to -8.4 percent.

Google still has Android Pay, but will discontinue Google Wallet.


The closure comes as parent company Alphabet has focused on reining in its less profitable divisions. Google hired Ruth Porat as chief financial officer in May 2015, and the Wall Street Journal reported in July that the former Morgan Stanley CFO was leading an internal audit to trim the company’s non-revenue generating fat. Ex-executives said as recently as 2013 that Google Wallet loses money on each transaction because of the high fees it pays credit card companies.

Google Wallet was originally intended to make in-store payments with Android devices, but that function was split into another service, Android Pay, which launched in 2014 after Apple launched its Apple Pay mobile wallet. Google Wallet is now focused on peer-to-peer payments, which has gained a bit of traction.

Nissan: sales rose 13 percent in March, exceeding analyst estimates as consumers in its largest market kept up demand for its crossovers and sedans, while Ford Motor Co. sales rose less than analysts had projected.


The company delivered 193,525 vehicles to retail customers, up 6% year over year, driven by a 7% hike in sales of its flagship Chevrolet brand cars, and a 13% jump in sales at its GMC truck division. Chevrolet sales were up 10% for the first quarter.

But then this, from Investor's Business Daily:

Industry executives and analysts had said industry sales could start to level off this year after several years of boisterous growth. The annualized pace of U.S. sales cooled to 16.57 million last month, down from 17.5 million in February and below views for an uptick to 17.6 million.

Ford’s March U.S. sales rose 8% year over year to 254,711 vehicles, led by SUVs and Ford F-150 brand pickups, the best-selling vehicle of any type in the country for 30-plus years. However, Wall Street expected a 9.4% increase.

Despite the miss, the No. 2 U.S. automaker’s sales grew 9% to 645,636 cars in the first quarter, marking the best sales performance for March and Q1 since 2006. Average transaction prices rose by more than $1,600 per vehicle for the month.

Fiat Chrysler sales rose 8% to 197,261 units, the company’s best March sales in a decade but below analyst forecasts for 13.9%. Sales growth was led by its Jeep brand, which climbed 15% vs. the same month a year earlier.

I'm not sure what to make of this.
Posted by Bruce Oksol at 6:58 AM No comments: