Correlation Between Academic Scores In US and Births Paid For By Medicaid? -- March 24, 2017

Today, CNSNews.com reports that a huge percentage of births in the US are paid for by Medicaid. North Dakota, by the way, is at the "right" end of the table on this one.

One wonders whether there is a correlation.

I just finished his son's book about life with Waylon and without Jessi he surely would not have lived past 45.

Everyone talks about John and June as a great love story ( and they were) but these two were just as great. People forget that Jessi literally put her career on the shelf to keep Waylon alive (his words). The fact that when he got clean he showered her with affection and praise. I just read that Waylon died on February 13. The very next day Jessi received a dozen roses at her door. How's that for a love story?

Posted by Bruce Oksol at 10:35 PM No comments: Links to this post

Obviously this page was updated as the NCAA championship rolled along.

Last night (sweet sixteen): some close games but this was the stunner: Xavier (seeded 11th) took down Arizona (seeded 2nd), 73 - 71. At one point, late in the second, I think Arizona had a 7-point lead. One wonders whether a 3-point attempt at the end for the win was a better shot selection than a 2-point for the tie.

The other surprise, I suppose, to some extent, was how easily South Carolina beat Baylor.

Posted by Bruce Oksol at 9:57 PM No comments: Links to this post

Posted by Bruce Oksol at 4:36 PM No comments: Links to this post

Danger zone! Dow plummets! Down 58 points at the close.


Highway to the Danger Zone, Kenny Loggins
Posted by Bruce Oksol at 4:34 PM No comments: Links to this post

October 28, 2018: update. It appears that all eleven wells have now been drilled to depth; ten of the eleven wells are on SI/NC status; the eleventh is on drl status. Note: there are twelve wells on this pad, but #31289 runs north; whereas the other eleven run south under the river/lake.

November 15, 2017;  I can't imagine anyone being interested, but this is the link to the environmental impact study Slawson provided during the permitting process. It will open as a PDF, probably on your desktop.

April 1, 2017: The Bismarck Tribune has a story on this multi-well pad.

March 25, 2017: this is pretty amazing if "we're" talking about the same wells. But that would not make sense. Yesterday I just happened to come across these Slawson permits/wells. I was just scanning the map and somehow happened upon these wells. Nothing more to the story. Then a few minutes ago, I was reading the Williston Wire. I had received it some days ago but didn't get to it until now. And there it was: an article on the BLM approving a permit for Slawson to drill the first eight of 11 wells from a single pad. But then again, the wells below have already been issued a permit from NDIC so I assume "we're" talking about different eleven (11) wells. From the linked article:


The Bureau of Land Management (BLM) has completed its environmental analysis on a proposal to drill oil wells on private land within the Fort Berthold Reservation near Lake Sakakawea.

With completion of this environmental analysis, the BLM will approve a permit for the Slawson Exploration Company to drill the first eight of 11 wells from a single well pad.
The well pad will be located approximately 800 feet from the lake, with the production facilities located three quarters of a mile away.

Although the well pad and facilities will be located on private land, the BLM must issue an approved permit to drill the Federally-managed leases, which will be accessed through horizontal drilling.

But it sure sounds like the same set of wells: the production facilities will be located three-quarters of a mile away, same as the site below in the "original post."

If these are the same wells, and it appears they are, this appears to be the process: the NDIC issues a permit, but if the BLM has jurisdiction, the BLM also has to approve the NDIC permit.


Slawson requests that the referenced wells be removed from confidential status. Slawson will instead request confidential status upon completion as allowed per rule 43.02.03.31. Slawson estimates the drilling of these wells will commence in October, 2016, and last approximately 12 months. Our current plan is to drill the 10 Torpedo wells back-to-back before completion operations. Completion and clean out will last approximately 14 weeks.

Some other notes from other correspondence:
Proposed APD conditions allowing operation "only during the winter months will have" considerable operating and cost effects. It would also extend the complete drilling program to take 3 - 4 years instead of the 14-month timeframe described in the BLM Torpedo Federal Environmental Assessment. 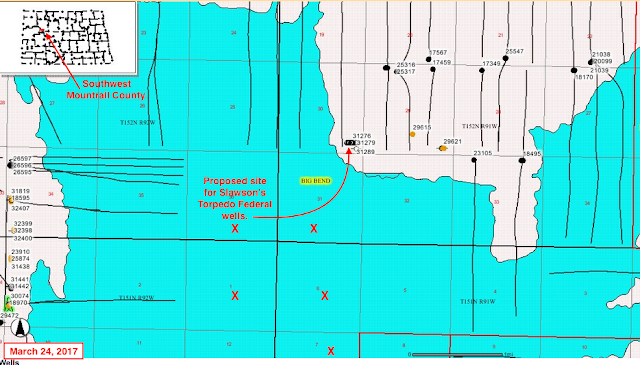 The horizontals will run north to south and will fan out as seen in the graphics below: 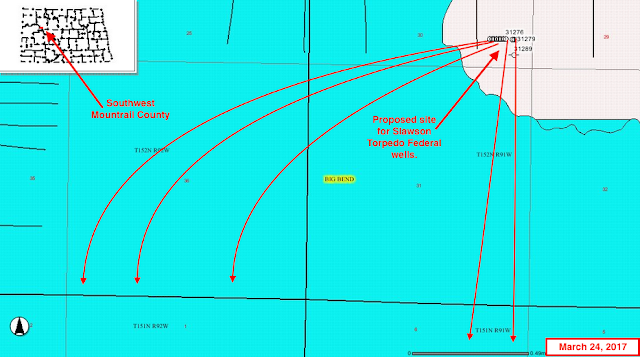 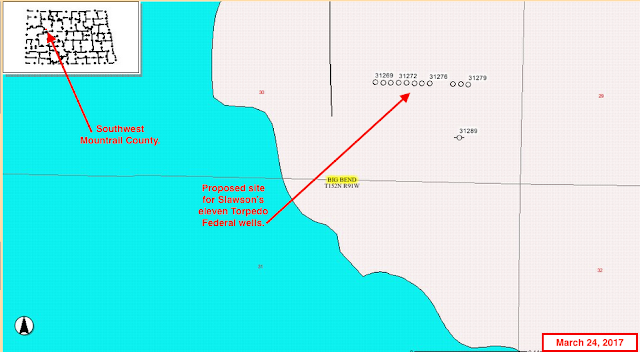 Mix of lengths for the laterals: 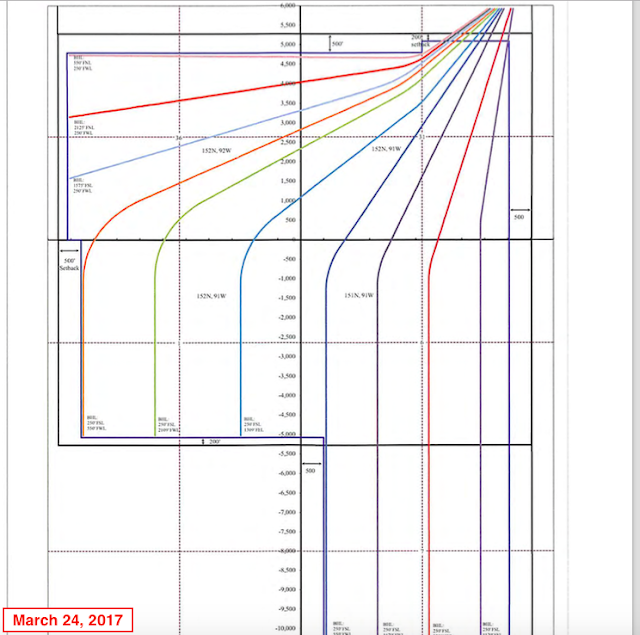 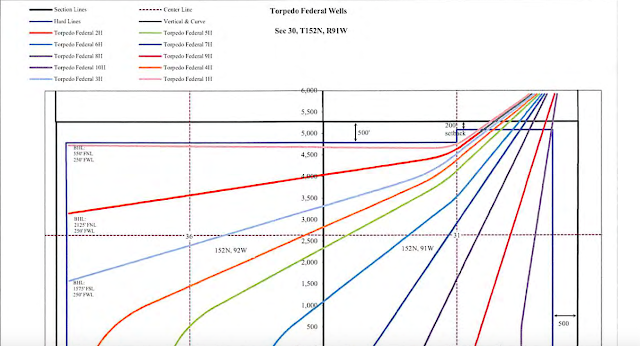 Nice graphic of the area to include the town of Parshall: 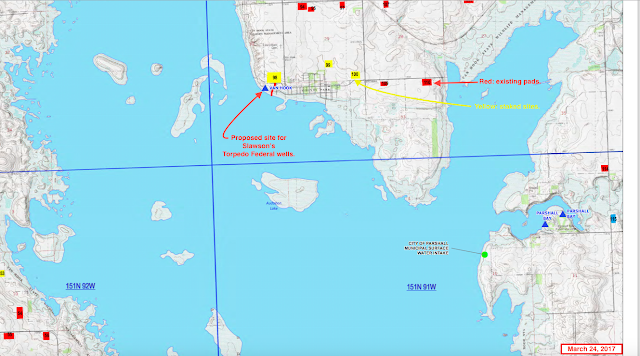 Posted by Bruce Oksol at 10:48 AM No comments: Links to this post

Whiting's Skaar Federal wells have been added to the "Monster Well" list.

These four EOG wells have been fracked (a fifth in the group was PNC'd); they were DUCs, now back on confidential list:
I am tracking #16971 at this site.
Location of these wells: 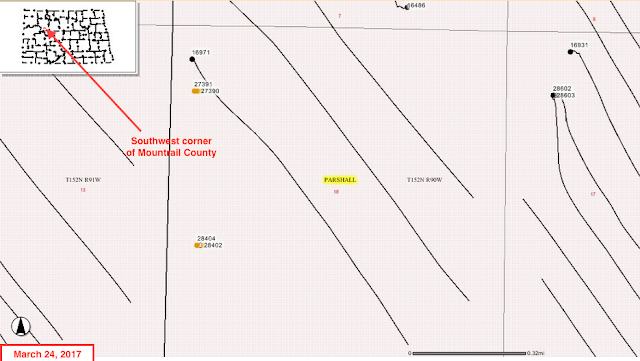 Not news; for the archives. Trump administration approves federal application for Keystone XL pipeline. It's hard to believe but I had 49 episodes of "As The World Turns" following the Keystone XL story. The 49th episode is at this link.

Wow, talk about trivia. While reading Carthage Must Be Destroyed: The Rise and Fall of an Ancient Civilization, Richard Miles, c. 2010, I came across an interesting section on Gades (modern Cadiz). Many decades ago, while in the USAF, I spent some time at the naval station at Rota, Spain, across the bay from Cadiz. Very, very good memories. The US Navy treated us incredibly well. In fact, in all my years in the military, it was always the US Navy that treated me the best whenever I visited, even when I was a very, very junior officer.


In the late eighth century BC the Tyrians (Phoenicians) set up a colony at Gades (modern Cadiz) ... Gades was not just a one-industry (metallurgy) town: it would also become famous for its garum, a strong-tasting sauce made out of decomposing mackerel mixed with vinegar, considered to be a great delicacy in the ancient world.

Then later in the book, in a section about Kerkouane, Kerkouanew as another ancient city located near Carthage, but it was destroyed and buried a long, long time ago. The author again brings up garum: the main industries of this settlement (Kerkouane) seem to have been salt-making, the manufacture of purple dye (many murex shells have been found on the site), and the production of garum.

And then again, in a discussion about western Morocco: an area particularly abundant in sea life and therefore a good place for the establishment of factories producing purple dye, salted fish and garum.

I knew I had recently seen "garum" before but I wracked my brain, trying to think where that was. Then when discussing this with Arianna last night, I remembered. I first heard of garum a few weeks ago while reading about the history of salt (notes at this post). Notes from chapter 4 of that book on the history of salt:
So, garum comes from decomposing mackerel and was considered a delicacy in the ancient world.

And for more trivia on murex/purple dye, see this post.
Posted by Bruce Oksol at 8:32 AM No comments: Links to this post

Mega projects: from twitter -- analysts at GoldmanSachs note 2017-19 is “likely to see the largest increase in megaprojects production in history." Huge CAPEX, huge projects begun in 2012 - 2014 will start coming on line this year:
Might we see gasoline below $1.00/gallon?


The oil companies have many reasons to move into the industry. They’ve spent decades building oil projects offshore, and that business is winding down in some areas where older fields have drained.

Returns from wind farms are predictable and underpinned by government-regulated electricity prices. And fossil fuel executives want to get a piece of the clean-energy business as forecasts emerge that renewables will eat into their market.

Even as oil production declined in the North Sea over the last 15 years, economic activity has been buoyed by offshore windmills. The notorious winds that menaced generations of roughnecks working on oil platforms have become a boon for a new era of workers asked to install and maintain turbines anchored deep into the seabed.

About $99 billion will be invested in North Sea wind projects from 2000 to 2017. A decade ago, the industry had projects only a fraction of that size.

Apple launches (PRODUCT)RED iPhone 7 and the new 9.7-inch iPad today. We were at the Apple store yesterday to buy May a new MacBook Air laptop. It was an incredibly easy and enjoyable experience.

We asked about the new 9.7-inch iPad. I've been waiting for this one. Sophia needs her own iPad. She is confused by all the different devices: some with touch screens, some without; some with keyboards, some without. This will end all her problems.

Apple lowered the price on the 9.7-inch iPad and improved it (ever so slightly) so it's a must for Sophia.

Yesterday, we were told the Apple store had the new iPad in the "back" but it would not be available for "one or two days." My hunch is it will be available today.

Posted by Bruce Oksol at 6:34 AM No comments: Links to this post

US House vote on Ryan-Trump health care bill today.  [Later: well, that didn't happen.]
Posted by Bruce Oksol at 6:30 AM No comments: Links to this post


RBN Energy: forecasting lease operating expenses in the E&P sector, part 3.
Posted by Bruce Oksol at 6:28 AM No comments: Links to this post