Note in passing: this is the 19,000th stand-alone post on this blog according to "blogger" statistics. That includes eight (8) drafts, several of which will probably never be posted.

One of the bigger stories this week was the announcement that North Dakota crude oil production was about 1% greater (0.6%) in October than in the previous month, September, 2015. Another big story this week was the fact that only 43 wells were completed in the month of October, well below the 123 completed wells the month before. This data was in the December, 2015, Director's Cut with the data for October, 2015.

Operations
Director's Cut with October, 2015, data is out
the red queen has not fallen off her treadmill, yet
US shale crude oil decline in November to be minimal
production per rig in the Bakken increases

Fracking
fracklog as posted in the December, 2015, Director's Cut does not reconcile
example of halo effect of fracking

December 13, 2015: a reader provided a very nice update of CLR's activity depicted in the graphics below --


Regarding increased activity in T153N-94W -- This area is part of HH's 350 wells "ears pinned-back in the Antelope" he laid out November 2013 when he announced Continental's transition to "full-field development."

Although this initiative has slowed, and could always be abandoned, Continental is continuing with development plans. Diamond Resources is currently renewing leases for a Continental 28-well, 2560-acre dsu not held-by-production in sections 2, 3, 10 and 11 of the same township.

The Continental Jersey wells are just to the east, where the Jersey 23-29 are producing, the Jersey 1-8 are duc's drilled a year ago, and the fourteen Jersey 9-22 permits were renewed last March.

The permit activity is of course, as Lynn Helms states, part of the producers maintaining a ready drilling inventory.

Along these lines, in the adjoining Hess properties to the north, which we have discussed over the last couple years, Hess obtained six EN-Freda permit November 30 as you chronicled last week. Hess also holds four EN-VP and R permits they obtained in May, and four permits for additional EN-Leo wells which were issued in June. Incidentally, the six additional EN-Freda wells are on the same pad with ten producing wells, the EN-Freda 1-7 and EN-Leo 1-3.

Over the past few days there has been a lot of CLR permitting in Elm Creek in the Bakken. Here's a snapshot of the two sections in which CLR has been doing a lot of permitting, sections 20 and 26 in T153N-R94W. 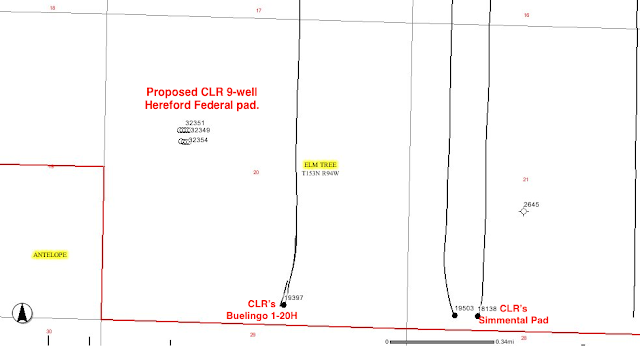 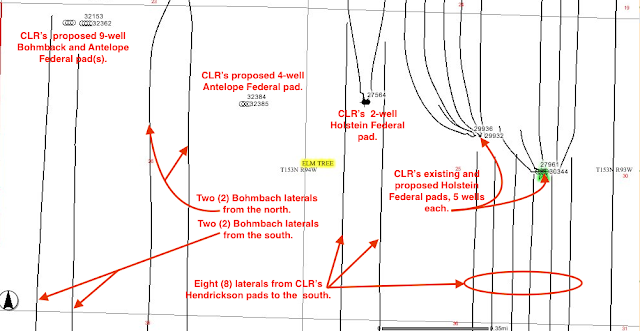 Add Mercedes-Benz to the long -- very long -- list of automakers supporting CarPlay beginning with their 2016 models.
Posted by Bruce Oksol at 1:01 PM No comments:


We looked at these metrics over time for EOG Resources in the Eagle Ford play, which showed that EOG is now drilling wells in one-third the time it took in 2011, drilling three times more wells per rig each year, and producing double the volume from each well in its first 30 days. And all of that translates to five times more volume produced for every rig than in 2011. So there are fewer rigs operating but those rigs are much more prolific than they were in 2011 or even a year ago.

Using data from the Energy Information Administration’s Drilling Productivity Report, we then looked at average production per rig for entire basins, and found that EOG’s productivity gains are no exception. Productivity improvements are occurring in varying degrees across all the major shale basins, and for both oil and gas rigs.

Which leads us to a new poll. In the most recent Director's Cut it was noted that there were only 43 well completions in October, compared to 123 well completions in September ... and despite that incredible drop -- from 123 to 43 -- not only did overall production near a record, but it actually increased by almost 7,000 bopd from the previous month.


So, with such rig effectiveness, completion techniques, drilling the sweet spots, and the halo effect of fracking, the harsh North Dakota winters, the significant decrease in fracking during the winter, will we see less than 50 active rigs this winter (January - March, 2016)? Rigs are generally contracted for six-month to one-year periods of time, and companies run their CAPEX plans about six months out. I assume the next cycle begins January 1, 2016.

Poll at the sidebar: will we see less than 50 active rigs this winter?
I will probably close the poll early in January if I remember. If I get tired of seeing it everyday, I will close it sooner.

ATT is offering an incredible deal, worth $650. Through ATT one can buy an iPhone 6s or iPhone 6s Plus and get a second phone free. The second phone is free. The first phone requires a 20 - 30 month installment plan.

Based on the comments, some think this is an Apple deal. It is not. It is an ATT deal. ATT is taking the "hit" or the "loss" (or the "gain") by getting at least one new customer line in the deal, and possibly two new customer lines. This is all about ATT subscribers, not Apple but Apple wins.

By the way, ATT is offering the same deal for Samsung phones.

On another blog -- a music blog, which I seldom update any more -- I enjoyed dropping into a fugue state after midnight, going from one YouTube song to another that were somehow related and see where I ended up after about 12 such moves. It only took six moves to get from Blue Eyes Blind above to Luciano Pavarotti and James Brown below:


It's a Man's World, Luciano Pavarotti and James Brown
Posted by Bruce Oksol at 10:42 AM No comments:


The CME/NYMEX Henry Hub contract for January delivery hit a 22-year low yesterday (December 10, 2015) of $2.015/MMBtu, 46 % below year-ago price levels. But US gas production has been humming along near 73 Bcf/d, more than 3.0 Bcf above a year ago and about 1.0 Bcf below the all-time high earlier this year. It’s a similar story for crude oil, with oil prices closing at $36.76/Bbl yesterday, but production hanging in there above 9 MMb/d. This is a testament to lower drilling service costs and producers’ ability to improve drilling productivity. But can productivity gains and drilling costs keep up with continually lower commodity prices? Today we look at how productivity gains and falling drilling costs are impacting producers’ rates of return.

In Part 1, we told the productivity story: how productivity improvements made production a formidable force in the market in 2015 in spite of substantial headwinds from low oil and gas prices, drilling budget cuts and falling rig counts. We showed how rig counts came off dramatically in correlation with prices this past year. But gas production volumes didn’t follow the rig count down. That’s because producers very quickly learned to do a lot more with a lot less.

To quantify drilling productivity in the context of gas, we showed various industry metrics, including drilling time, wells drilled per year per rig, 30-day average IP rate and IP additions per rig per year. We looked at these metrics over time for EOG Resources in the Eagle Ford play, which showed that EOG is now drilling wells in one-third the time it took in 2011, drilling three times more wells per rig each year, and producing double the volume from each well in its first 30 days. And all of that translates to five times more volume produced for every rig than in 2011. So there are fewer rigs operating but those rigs are much more prolific than they were in 2011 or even a year ago.

Using data from the Energy Information Administration’s Drilling Productivity Report, we then looked at average production per rig for entire basins, and found that EOG’s productivity gains are no exception. Productivity improvements are occurring in varying degrees across all the major shale basins, and for both oil and gas rigs.

Most of Mexico's exports are of heavy crude oil, which Pemex defines as crude oil with an API gravity equal to or below 27 degrees.

As Mexican heavy crude oil exports to the United States have decreased, increasing volumes have been sold to Asian markets, especially India, and to a lesser extent South Korea and Japan. Greater volumes of heavy crude oil have been processed in Mexico's domestic refineries, partially offsetting a decline in processed volumes of lighter domestic crude types.

This is an extremely important story to understand. Again, it's not just the total glut of oil, but the type of oil. Also note that despite the fact that the Keystone XL did not get built, more than enough heavy oil is reaching the US from Canada.

I flip-flop on the issue of the Keystone, it seems, every six months. In the big scheme of things, it seems not to be an issue.

Eventually, US lawmakers will see this Mexican story and the move to allow US exports of highly flammable Bakken oil will move forward through the efforts of the highly influential senator from North Dakota, the honorable Heidi Heitkamp.

Note: American refineries along the coast are optimized for heavy oil. And yet, heavy oil from Mexico into the US has been cut by 50% since the Bakken boom. What gives? The Bakken is light oil; US refiners need heavy oil (Europe needs light oil). Heavy oil from Canada is making up the difference and it's arriving on rail because Americans have a romantic relationship with rail and hate subterranean things they cannot see.


Subterranean Homesick Blues, Bob Dylan
Posted by Bruce Oksol at 10:29 AM No comments:


"It was to me an economic aberration that oil remained much cheaper than Evian mineral water," the Shah of Iran once wrote.

That was then. Today:


THE SHAH must be spinning in his grave.

And John Kemp writes that the Brits should thank Saudi Arabia for "cheap" gasoline:


Dec 11 Britain's motorists have Saudi oil minister Ali al-Naimi to thank as the country's supermarkets cut the price of petrol to less than one pound per litre for the first time in six years.

Morrisons, the country's fourth-largest grocer, has cut the price of unleaded gasoline to 99.9 pence per litre, the lowest price excluding special promotions since 2009, and other supermarkets are expected follow, according to the BBC.

Brent prices have fallen to $39 per barrel for the first time since 2008/09 after the Organization of the Petroleum Exporting Countries (OPEC) failed to agree a production level at its meeting on December 4, 2015.

By the way, this "stuff" about "failing to agree to a production level" is a bunch of malarkey. OPEC has exceeded quotas every year at least since 1998, with perhaps two minor -- and very, very minor -- exceptions. Previously posted.

This Probably Says It All About Great Britain And Energy -- December 11, 2015

This story was also published in The Wall Street Journal.

Financial Times is reporting that UK's last deep mine set for closure:


Cheap imports have hastened coal’s long demise, said Shaun McLoughlin, the mine manager. It costs £43 a tonne to get coal out of Kellingley, North Yorkshire. The world price is £30. The US power sector is switching from coal to cheap shale gas, leading to a glut. Russia and Colombia have far lower operating costs.

Mr McLoughlin said: “Two-and-a-half years ago everything was looking rosy. The bottom has fallen out of the market very quickly. The world is saturated with cheap coal.”

What is more, demand is dropping in the UK as the government shifts to greener energy. Generators pay more in tax to burn a tonne of coal than they pay for the fuel itself, which generated 29 per cent of the country’s electricity last year.

The nearby Eggborough and Ferrybridge power stations that use Kellingley’s coal are closing too.

Amber Rudd, energy secretary, has favoured subsidies for gas to replace coal by 2025, saying to rely on the “polluting” fuel was perverse.

Many, many story lines.