This is pretty amazing. Low electricity demand in New England and yet the utility's supply comes from 6% oil and 4% coal, combined = 10%, about what renewable energy is providing.

Something tells me there is a relative shortage of natural gas. 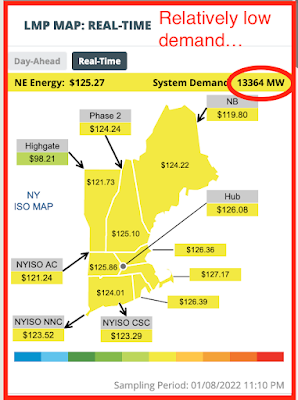 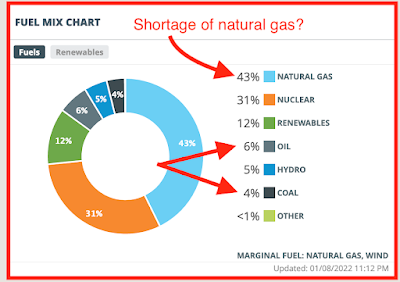 I'm heading to bed, but will leave y'all with this -- just one more look:

What a great Saturday night:

I read the article, and then replied to the reader:

We have a small U-Haul storage unit just a five-minute bicycle ride from where we live.  I vowed some years ago to never rent storage space again, but it's turned out to be quite nice.

I could pay for the rental on line, but I love to ride my bike down to U-Haul once monthly to talk to the folks and pay my bill.

They said the same thing: they ran out of space to park trucks -- too many trucks coming in from California.

They go through periods when they refuse to take new U-Hauls and folks bringing U-Hauls into this area have to find another U-Haul location. Amazing.

I also learned this: U-Haul changes their rates based on demand. Rates have gone way up to rent U-Hauls from California to Texas.

I think I posted a blog about my sister in Portland, OR. When they moved out to Montana they were unable to find a U-Haul rental in Portland, OR. Too many folks moving out. They finally rented in Montana and drove empty all the way to Portland to get their stuff and bring it back to Montana.

A recent report from U-Haul revealed migration to southern states has continued and Texas was the top destination for those moving.

“California and Illinois ranked as the states with the greatest one-way net loss of U-Haul trucks, and most of that traffic appears to have gone to Texas and Florida.”

Texas was at the top of the list prior to the pandemic in 2016 and 2018, but fell to Florida in 2019 and Tennessee the next year. Now, it has retaken top place.

California’s net loss was not as bad as in 2020, but U-Haul said that was partly because the company “simply ran out of inventory to meet customer demand for outbound equipment.”

Texas’s growth is statewide, although some of its biggest gains occurred in the suburbs around the DFW Metroplex. [We live in one of those suburbs; north of Ft Worth; northwest of Dallas.]

Overall moving traffic across Texas increased in 2021, as it did in most states. Arrivals of one-way U-Haul trucks jumped 19% while departures rose 18% over 2020. Arrivals made up 50.2% of all one-way U-Haul traffic last year in Texas.

“The Texas economy is growing fast,” Kristina Ramos, U-Haul Company of South Austin president, commented. “With a strong job market and low cost of living, it’s a no brainer. Texas doesn’t have an income tax, so families get more for their money.”

Are you lonely tonight?

Are You Lonely Tonight, Sam Kinison
Posted by Bruce Oksol at 10:01 PM No comments:

The wells on this pad just went off line:

The NDIC map is not current, but this means that something is going on with these wells or pads:
Continental's Tallahassee FIU pad -- and there it is,

And, the CLR Harrisburg pad, for example, this well:

This well was drilled back in 2013.  Remember all that talk about the dreaded decline rate?

I'll have to update these wells later but this is what the Bakken is all about.

This is where I'm headed next in my culinary journey.


This is really funny. My wife and I got the smoking gun specifically for smoking salmon and that's why this professional bought the smoking gun ... for salmon.
Posted by Bruce Oksol at 8:37 PM No comments:

However, based on other sources, and based on production reports from wells in these areas, it appears there is a lot of activity by Continental Resources. 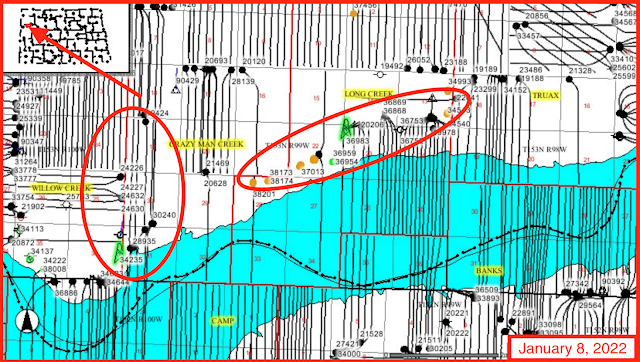 Top Stories For First Week Of New Year Have Been Posted -- January 8, 2022

Old-timers all remember long distance telephone calls that cost an arm-and-a-leg, and how we had to limit our time on these calls. We remember geeks like Steve Jobs (?) tricking ATT into free long distance phone calls. Now, we have FaceTime and other video-phone calls, unlimited talk, and all included with basic price of the device and monthly subscription or whatever it is.

I was watching the NDSU-Montana State football game until the start of the third quarter on the big-screen computer and then with a single click connected with my sister in Montana (on Flathead Lake) and then our daughter in Portland, OR, and Sophia got to say "hi" to her cousins there. I think this was one of the first times the twins, about two years old, have spent so much time on the phone with Sophia.

It really is amazing, and old-times really appreciate the technology / advances over the past several decades .

Daimler-Benz recently split their vehicle manufacturing business into two companies, spinning off the Daimler Truck Group. That closed a few weeks ago. I can't recall; I must have talked about on the blog. Whatever.

It took awhile for the ADRs to appear in US equity markets, but it appears to be there now.

Merrill Lynch had a "spaceholder" for the ticker about ten days ago. ML has now updated that spaceholder to what appears to be the "official" ticker for the Daimler Truck Group ADR: DTGHF.

The other company, the "original/old" company, Daimler A, the ticker symbol remains: DDAIF.

Schwab does not yet show it on their website. Maybe Monday?

A reader writers that Yahoo!Finance now tracks DTGHF. It looks like it began trading on US equity markets, "other OTC," on January 6, 2022. 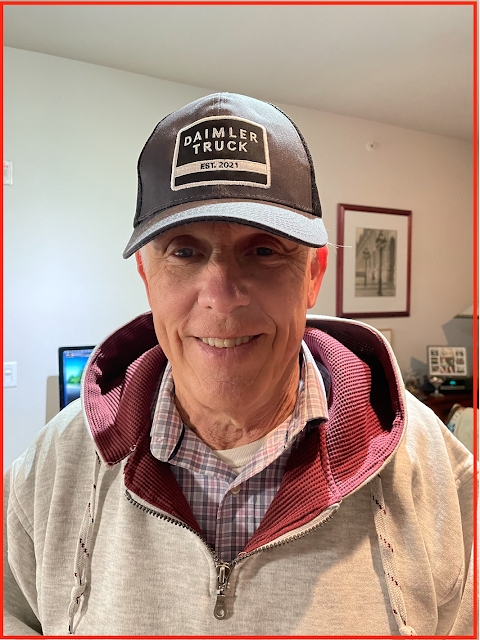 Montana State with first drive; turned over to NDSU.

Stadium: filled with cowboy hats! More than I've ever seen at a Dallas Cowboys game.

NDSU just scored first touchdown, mostly running. Nine minutes into first quarter. NDSU, if this keeps up, the game will be over by the end of the first quarter. But Montana surprised a lot of folks getting to this championship game.

Montana State with third possession. Takes "fair catch" -- had the entire field open. Took it on the ten-yard line, but there must have been a penalty or I missed it. Montana starts at 25-yard line.

Montana State with fourth possession. North Dakota has scored a touchdown on each of its three possessions.

Will they do it again?

First play for Montana from #12 is intercepted by NDSU. After the interception, unsportsmanlike penalty -- excessive celebration on #2 -- and penalized fifteen yards. Not smart.

Montana, fifth possession after stopping NDSU at midfield. Announcers wanted NDSU to go for first down on 4th and two.

Reminder: Montana's starting quarterback sustained injury, first play in the game. Now, #12 is the quarterback is T. Rovig. Wow, talk about a lot of different quarterbacks over the past year or so for Montana State. T. Rovig was the starter, a junior for twelve games; then in the playoffs, Mellott or McKay. Mellott, a freshman, fourth string quarterback when the playoffs started (?), is injured in opening play and T. Rovig back to quarterback.

Fifth possession for Montana State continues. Out to mid-field. Long pass -- would have been a touchdown for Montana State -- broken up by NDSU. Second and ten at midfield. Same play; same results. 3rd and ten from midfield. Defensive interference, comes close, but no call. Montana will punt away for fourth time.

Five:twenty six, second quarter, NDSU starting on the 15-yard line. Will probably play conservatively through the rest of the second quarter. Critical third down play successful, and out to 25-yard line. Every time it looks like NDUS is in trouble, manage to convert to first down. Now looking at possible targeting by Montana player. I don't see it; it was a hard, hard hit, but not targeting. Tough call for replay official. I think they let it go; no-call. Yes, no targeting. Second down and two yards. Straight-ahead run, first down. Under a minute to go, all time outs left, from the six-yard line, second and two.

Will it be a four-TD game at the half?

Trick  play. Fourth touchdown. Six-yard run. I assume teams do this all the time, but I had not seen it before. Quarterback lines up behind center, and then as call begins, quarterback runs to left, and direct snap to running back about six yards behind quarterback. Running back Hunter Luepke.

Start of the second half.

NDSU: first possession. Already out to mid-field. Drive continues. Another first down on first-and-ten. Another touchdown, Josh Babicz, 35-yard reception. 12:34 in third quarter. 35 - 0.

Last first half possession by Montana ends with punt to NDSU with six seconds left.

So, with two-and-a-half quarters gone, the game is over.

DuckDuckGo will get you the paywall.

The link to FT was provided by a reader; huge thanks. The article is more typical of what one might find in Vanity Fair, not FT. 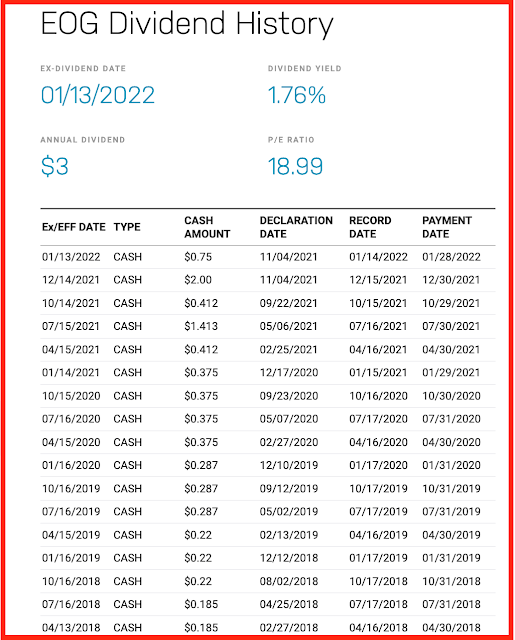 Hess: announces a "meaningful" dividend growth this year (2022) as it start to prioritize returning capital to shareholders over business investments. January 6, 2022. 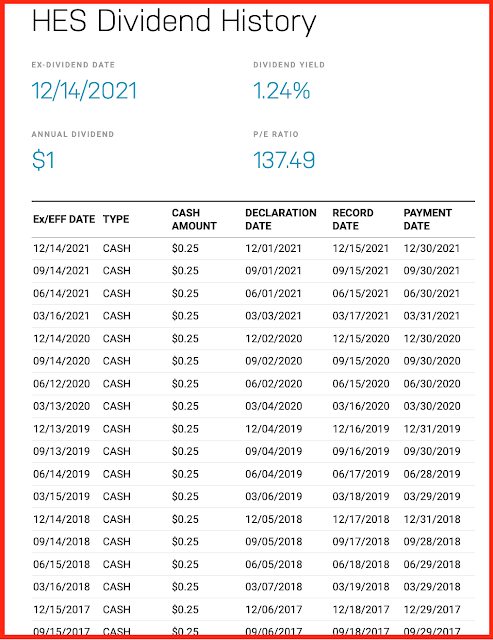