I think what put me into such a great mood was The Williston Herald story that a reader sent me. The more I think about it, the more excited I get.

If the national media was following this story, this would be the headline: "Bakken Surges! State Activates Emergency Task Force." And then lead with this image: 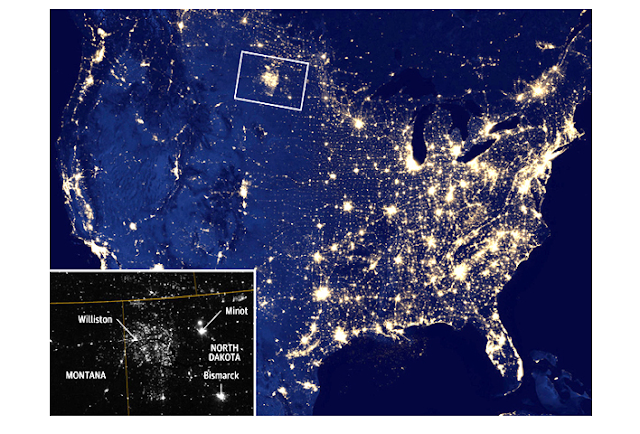 The sub: "$13 billion not enough! North Dakota needs another $11 billion in infrastructure."

Wow. The Bakken simply does not quit.

Memo to self: send notes to:


Original Post
A reader sent me this story (thank you, again). I was not going to post it -- it sounded a bit "excessive," shall we say? A little bit of hyperbole? I thought maybe the writer mis-heard or mis-wrote.

The lede in This Williston Herald story:


North Dakota’s oil and gas industry has invested more than $13 billion in gas gathering and processing infrastructure to date, but it needs at least another $11 billion to meet the state’s more stringent gas capture targets that begin in November.

But then look at that second paragraph in the linked story:


So far, an additional 800 mcf of gathering and processing capacity has been proposed for 2018 and 2019, but these are not nearly enough to get there, according to projections by North Dakota Pipeline Authority Justin Kringstad.

I assume the "800 mcf" is 800 million cubic feet because 800,000 cubic feet would make no sense. Crestwood, for example, announced one December 6, 2017, that it was commissioning Phase 1 of the Bear Den natural gas processing plan in Watford City, which would add another 30 million cf/d.

But having thought it through and looking at this graphic from the NDIC site, I thought it was a great story to post. North Dakota is producing about 2.1 billion cubic day: 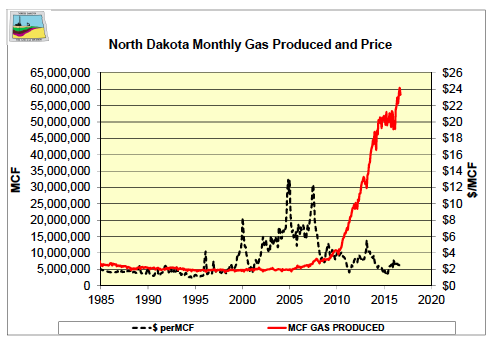 But I still find that absolutely incredible:
The writer wondered whether there might be a possibility of a "cracker" somewhere in the state. Some links regarding crackers:

This was released last week but I forgot to post it. 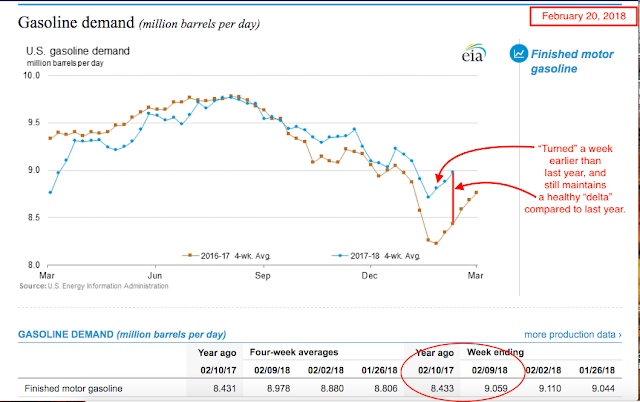 Wow, it's incredible out there right now and in a few minutes I will be picking Sophia up from Tutor Time. The rainfall is quite incredible. I think I heard that north Texas was under drought conditions last week; it looks like this will change things.

It was fairly mild earlier today; I was able to go biking despite a bit of rain, but it's getting colder and the rest of the week is going to be very, very cold.

But look at this, just to the northwest of us (DFW airport) there is already ice and snow. I assume this is heading our way. 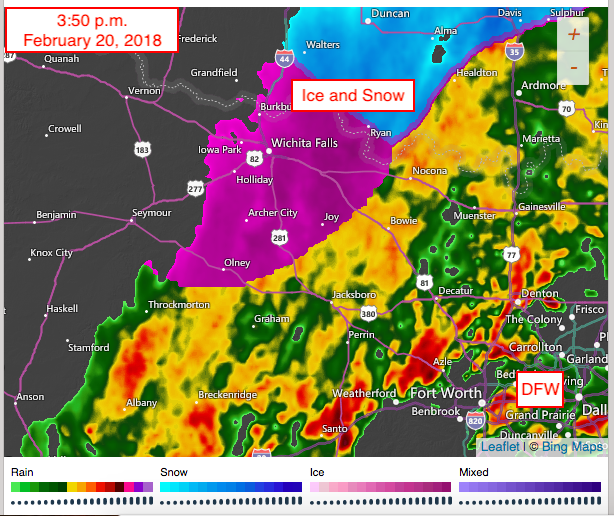 Another country that gets a free pass when it comes to CO2 emissions: South Africa. From Twitter: 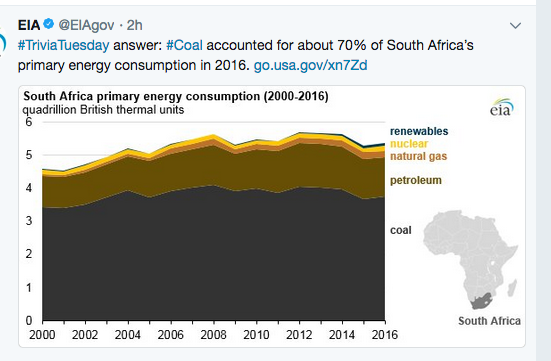 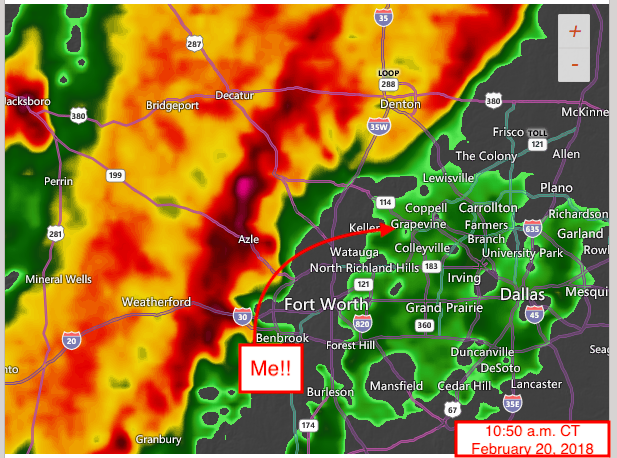 
Canadian oil producers can’t get a break. First it was the pipelines — there are not enough of them to carry the crude from Alberta’s oil sands to export markets. This pipeline capacity problem has been forcing producers to pay higher rates for railway transportation, which has naturally hurt their margins in no small way. Now, there is a shortage of rail cars as well.

The situation is going from bad to worse for Canadian producers who can’t seem to catch a break. Canadian railway operators are fighting harsh winter weather and finding it hard to supply enough cars to move both crude oil from Alberta and grain from the Prairies.
The harsh weather is just the latest factor, however.

Before that, there was the 45-percent surge in demand for rail cars from the oil industry, Bloomberg reports, citing Canadian National Railway. The surge happened in the third quarter of last year, and Canadian National’s chief executive Ghislain Houle says that it took the company “a little bit by surprise.” This surprise has led to “pinch points” on the railway operator’s network, further aggravating an already bad situation.

Even though common sense and reality seem to paint a different picture (see stories above), a faxed press release seems to have been worthy enough for printing by The Washington Post.


Barely two years ago, after weeks of intense bargaining in Paris, leaders from 195 countries announced a global agreement that once had seemed impossible. [Signing a piece of paper with no intention of enforcing the guidelines is "hardly" impossible.]

For the first time, the nations of the world would band together [like one big tribe] to reduce humanity’s reliance on fossil fuels in an effort to hold off the most devastating effects of climate change. [The most devastating: the loss of Tuvalu, which has since then grown much bigger.]

“History will remember this day,” the secretary general of the United Nations, Ban Ki-moon, said amid a backdrop of diplomats cheering and hugging. [#MeToo]

Two years later, the euphoria of Paris is colliding with the reality of the present.
Global emissions of carbon dioxide are rising again after several years of remaining flat.

The United States, under President Trump, is planning to withdraw from the Paris accord and is expected to see emissions increase by 1.8 percent this year, after a three-year string of declines. Other countries, too, are showing signs they might fail to live up to the pledges they made in Paris.

In short, the world is off target.

The story fails to mention that NOAA has been found to be fudging the current data.

But, The Washington Post clearly tells us we are already doomed, if anyone is really paying attention to these graphs (and I don't think they are): 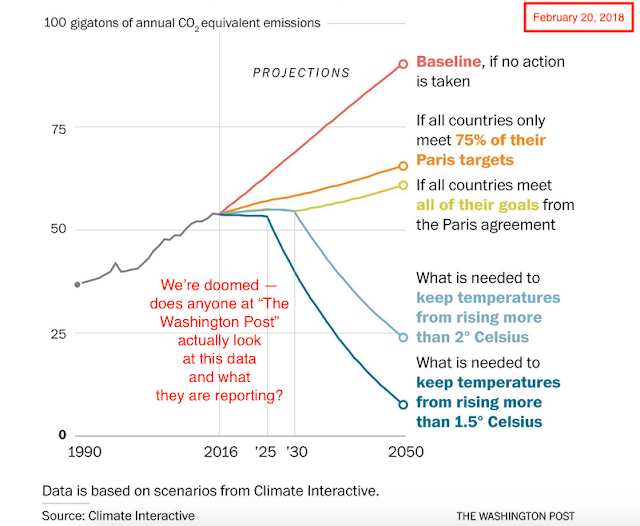 But this is key. This is the only paragraph in the story that calls out names:


Brazil has struggled to rein in deforestation, which fuels greenhouse gas emissions. In Turkey, Indonesia and other countries with growing economies, new coal plants are being planned to meet the demand for electricity. In the United States, the federal government has scaled back its support for clean energy and ramped up support for fossil fuels.

In fact, the US moving to natural gas, is actually doing more than the aforementioned.

By the way, the linked Washington Post story appears to be a faxed press release supplied by the Tyndall Center for Climate Change Research and edited for publication. I doubt any reporter was sent to the Tyndall Center to get the story.
Posted by Bruce Oksol at 10:16 AM No comments:

Posted elsewhere as an update, but re-posting here so the item is not buried. This post will not be updated; BHP and US shale will be tracked at the linked post. From August 22, 2017:

Bubble: it's been a recurrent theme on the blog -- $60,000/acre in the Permian might have been a tad expensive. Today we learn that Australia mining giant BHP Billiton's full-year profit soared 450% but still missed estimates. It will triple its "final" dividend (43 cents at the end of the year, vs 14 cents one year ago). But here's the biggest news: BHP will sell its US shale assets. The company is being pressured to spin off its US oil and gas operations. BHP spent $20 billion in 2011 on US shale oil and gas assets ... and we know how that worked out. I see the headline -- "maybe BHP Billiton's $20 billion fracking bet wasn't a blunder after all" -- Forbes, June 3, 2014 -- let's see who wrote that and why: Christopher Helman --


In 2011, the Australian mining giant BHP Billiton made a surprise entry to the North American shale game by spending $20 billion to snap up some 1.5 million acres.

It bought Petrohawk Energy for $15 billion (including assumed debt) to get at its primo positions in the Eagle Ford, Permian basin and Haynesville shale. And it shelled out $4.75 billion to Chesapeake Energy for its interest in the Fayetteville shale.

The move was met with surprise by BHP investors, who had only just gotten accustomed to their company's forays into deepwater drilling in the Gulf of Mexico. The company had never "fracked" a single well.

Costs were too high, because BHP didn't yet know what it was doing. Then natural gas prices plunged to lows not seen in a decade. Suddenly this big acquisition began to look like a big folly.

Early this morning, well before the article [at the linked post] was posted, I mentioned that I'm completely content with $45 oil. In fact, I argue that the sweet spot for WTI pricing right now is $46 to $52. I used $60 as the high end of the sweet spot. I find it interesting that this Bloomberg article (at the link above) chose exactly the same numbers.


With Western Canadian crude oil production rising, available pipeline takeaway capacity shrinking and crude-by-rail volumes rebounding, midstream companies are ramping up their efforts to get long-planned pipeline projects built. But that’s no easy task. Virtually every plan to add new takeaway capacity out of Alberta — Canada’s #1 energy-producing province — continues to face regulatory hurdles, and it remains to be seen which of the pipeline projects will be completed, and when.

We can’t just throw up our hands, though, and say, “Who knows?” With pipeline constraints out of Western Canada worsening by the month and having profound negative effects on the price of Western Canadian Select (WCS), there’s real value in reviewing in some detail what these pipeline projects are up against. Today, we discuss what’s being planned on the takeaway front and where these projects stand.