After Being Off-Line For More Than A Year, An Old Whiting Well Comes Back On Line With Jump In Production -- October 29, 2021

Posted by Bruce Oksol at 4:16 PM No comments:

Cushing: all those articles suggesting Cushing is trending toward "empty"? Well, perhaps this is part of the reason, link here. 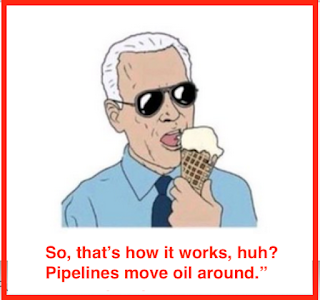 Slow-rolling US shale: permits will now have to wait for federal environmental assessments for 2022. Link here. We've been through this before; it isn't pretty, but fortunately CLR and others minimally affected. But, wow, inside the reservation, what the government giveth can also taketh away.

Anna wells: let's start here when data is posted; still not posted for these wells. Those wells are tracked here.

Not good: social media bulls starting to use the phrase, "windfall profits." US Congress watching, waiting. Staffers are being told to go through the 1980 Crude Oil Windfall Profit Tax Act of 1980 playbook.

Wow, wow, wow -- it's hard to deny that Yahoo!News and guilty-by-association, Yahoo!Finance is anything but biased and bearish when reporting the news and Wall Street, respectively.

So, this is amazing. Had I not been strapped into the seat of the airplane on which I'm flying I might have might have ended up on the floor. Rick Newman, senior columnist, for Yahoo!Finance has a column titled, this week in Bidenomics: the cartoon presidency. It begins:

Have you met Leo from Peoria? If not, he’ll help you understand why Congress must salvage President Biden’s floundering social-welfare agenda and get America back on track.

Leo and his mom Linda are cartoon characters who play starring roles in Biden’s new “Build Back Better Framework.” You might be wondering what’s new about this framework, since Biden has been promising to “build back better” for nearly two years and Congress has been working on legislation since Biden took office in January.

The new part is that the latest framework is a lot smaller than Biden’s prior plans. Democrats with wafer-thin majorities in the House and Senate couldn’t pass Biden’s original request for $3.5 trillion in new spending on green energy and social programs, so Biden has slashed his ask down to about $1.8 trillion in new spending over a decade. The skinnier framework has a better chance of passing than the overstuffed package Biden started with, but it’s no shoo-in.

Cash is back: Exxon, Chevron amass cash as oil tops $80 / bbl -- The WSJ. One of many, many "feel-good" articles we're going to be seeing for the next twelve months. Congress wants Big Oil to "come clean" -- literally and figuratively. This would be a good time for Big Oil to tell Congress it will stop all new drilling for two years to make amends for all the emissions for which they have been responsible for the past fifty years. That will show them.

The two largest U.S. oil companies, Exxon Mobil Corp. XOM +0.21% and Chevron Corp. CVX +0.76% , reported on Friday their most profitable quarterly earnings since before the onset of the global pandemic. Exxon reported earnings of $6.8 billion, its best quarterly performance since 2017, and said it would launch a $10 billion share buyback program starting next year. Chevron reported $6 billion in net income, its best quarter since 2013, and said it generated $6.7 billion in free cash flow, its most ever.

The market: surprisingly, all three major US indices are showing green. Where's the profit taking? How can I afford to accumulate more shares in just about everything if there's not a pullback? Even AAPL looks surprisingly good. It's a $145-stock and unlikely to ever see $140 again.

Independence: this reminds me, I need to post "Me and Bobby McGee.  I don't know if folks remember, but last year, the US was energy-independent. Well, that's history, and the US Congress is working overtime to make sure it stays that way.  Freedom is just another word for nothing left to lose. Feeling good was easy .... but that's history. Next to go: agriculture. High energy prices and fertilizer shortages now threaten the US farmer.

This well was drilled back in 2009. From the very beginning it was a lousy well, but it was kept on line. Now, the Manitou oil field is surprisingly good. Amazing. Hess has cracked the code. This well will not produce on a monthly basis, in 2021 and 2022, more oil than it produced monthly in its first six months of production.

The well is now off line while neighboring wells were fracked. It's always possible with such great neighboring wells, this well will be permanently shut in. One never knows. But whatever happens this well did what it needed to do. It served its purpose.

A major driver for global growth in natural gas use, including LNG, derives from the power-generation sector. Large Japanese utilities introduced LNG into the power fuel mix in the early 1970s. More recently, a number of utilities in other countries have increased their use of gas-fired generation — and their imports of LNG — largely due to gas’s lower emissions profile and the flexibility that gas plants offer in balancing variable demand loads with variable dispatch profiles, including wind farms and solar facilities. The growing availability of LNG has also spurred interest among independent power producers (IPPs) in developing similar gas-fired projects, but so far fewer than 10 such projects have come online and some do not operate at their full potential. Why has LNG-to-power made such little headway in the independent-power segment? In today’s RBN blog, we examine the special nature of IPP-owned LNG-to-power projects and the challenges they pose not only to their sponsors but to LNG suppliers.

The use of LNG for power generation in international markets historically has been dominated by bilateral deals between LNG suppliers and large incumbent utilities that enjoy a monopoly within their service territories. The credit rating of buyers such as Tokyo Electric Power Company (TEPCO) and Japan’s Chubu Electric, coupled with their ability to commit to LNG supplies for up to 25 years, provided a number of first-generation liquefaction/LNG export projects with the certainty their developers needed to make the costly investments in those assets. These utilities were under no obligation to purchase power from third-party producers, but instead expanded their generation fleets as needed and their consumers picked up the tab.