These Rink wells have all come off-line as of last month (2/19):
Recently fracked, to the east:

The Rink / Kermit wells are tracked here.
Posted by Bruce Oksol at 8:47 PM No comments:

Olivia is our middle granddaughter. She lives and breathes soccer. She plays for the FC Dallas soccer club, playing "up" one year: she is a year younger than her teammates.

Earlier this year she was asked by another team in the club to be a guest player for the team when it would play in the annual Memorial Day Colorado soccer tournament. She played with the same team last year in the same tournament.

I still don't know the whole story, but she must have been moved to a striker position on the team for which she played in the Denver tournament. She scored, by far, the most goals of any player on her team.  In one of the team's 4 - 1 wins, she scored three points in regulation play and one point on a penalty kick.

In the bracket below, her team is in Bracket B, team #4, FC Dallas 06 Frontier Development League. They went on to play in the championship game which they won 3 - 1. I think she may have made all three goals, but am not sure. When I next see her, I will ask.

Link to the soccer brackets here.

Link to the homepage for the Denver tournament here. 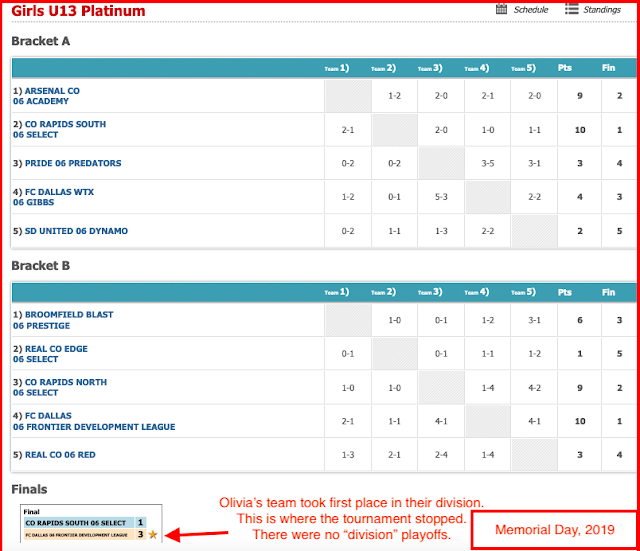 This may be a story that has been posted before, but the last note I remember regarding tax breaks for Pemex was $3.5 billion.

This article suggests that Mexico (aka AMLO) is seeking as much as $7.3 billion worth of tax breaks in 2020 and 2021. The previous amount was for $3.5 spread out over six years.

But this, at the linked article at the top probably says it all:


While the tax breaks are positive, said John Padilla, managing director of IPD Latin America, they will have no real impact unless Pemex can reverse falling output. “All they’re doing is diverting from one pocket to the other,” he said. “Money will no longer resolve what ails a very debilitated Pemex.”

The road-to-Mexico is tracked here.
Posted by Bruce Oksol at 3:49 PM No comments:

Earlier today I suggested that with poorer-than-expected "high-impact" exploration results this past year (2018), "peak oil" was back on the table.

A reader reminded me of an interesting development: the Jurassic.

I'm a bit irritated with myself. I vaguely remember reading an article on the possibility of some very deep, very old Jurassic oil reservoirs. I thought I had posted at least a short note but perhaps not.

Now, after suggesting that "high-impact" exploration has not been as good as hoped, a reader writes:

Past few years, there has been some 'buzz' surrounding so called 'pre-salt' formations ... geologically older rock at greater depths.

Brazil has claimed some VERY high numbers regarding oil in place in offshore pre-salt formations.

Recently, there have been several references to actual - or potentially - large resources in old, deep Jurassic  reservoirs, which I believe are the same as pre-salt.

The Gulf of Mexico is the location for some of these with Chevron's Anchor project being especially  intriguing.

The ultra high pressure of 20,000 psi has been an insurmountable factor as hardware has not existed to routinely exploit hydrocarbons at this high a pressure.

Anyway, if Chevron decides in the coming weeks to proceed with this Anchor project - and it is successful - it has the potential to open up huge areas for development that heretofore have been deemed not doable.

So, we'll add "Jurassic" to the "other formations" at the sidebar at the right.
Back in 2005: "Origin and potential of unconventional Jurassic oil reservoirs on the northern Arabian Plate," from onepetro.

This may have been the article I saw recently and forgot to post. From rigzone, "US Gulf of Mexico on track for historic 2019." Snippets from the article: 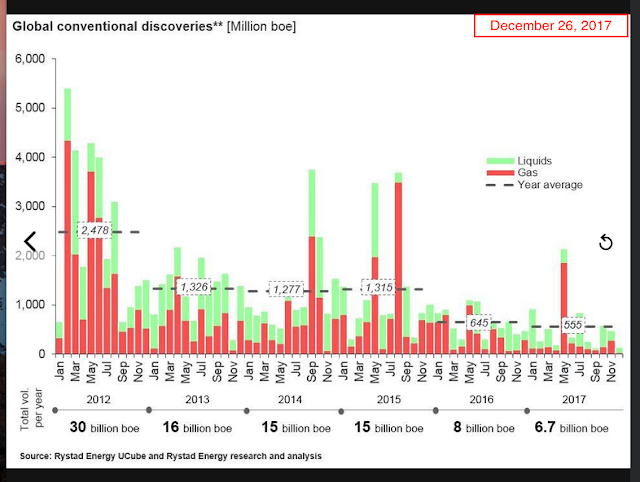 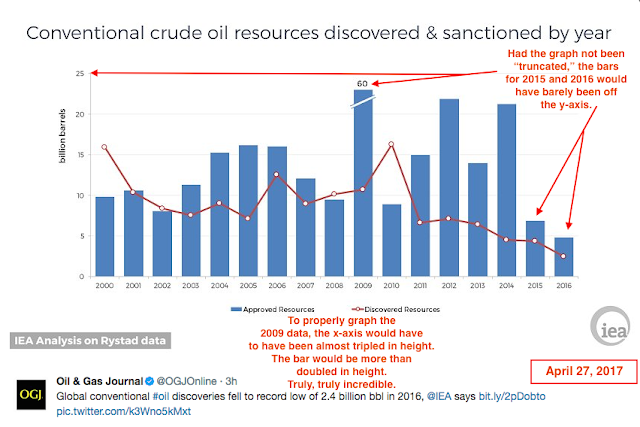 From twitter today -- must be a very, very slow news day for The Wichita Eagle. I can't imagine anyone reading The Wichita Eagle really caring one way or the other. With everything going on in the world "today," it's amazing that The Wichita Eagle found space (or enough interest) to post it. Helps explain why newspapers are disappearing.

Nothing new in the article that wasn't already known.
Posted by Bruce Oksol at 11:57 AM No comments:

The Legacy Fund is tracked here.
Posted by Bruce Oksol at 7:52 AM No comments: 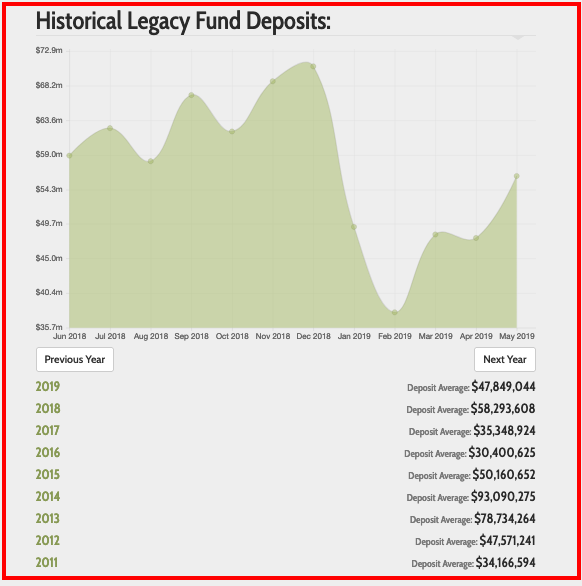