The Four-Well Kennedy-Miles Pad Has Been Updated; Some Nice Production Numbers; All Wells Back On Line As Of 5/16

Effect Of Fracking Neighboring Wells On An Existing Well -- September 11, 2016

I may be seeing things that don't exist. In addition, in a long note like this, there will be typographical and factual errors.


Screenshot of these three wells: 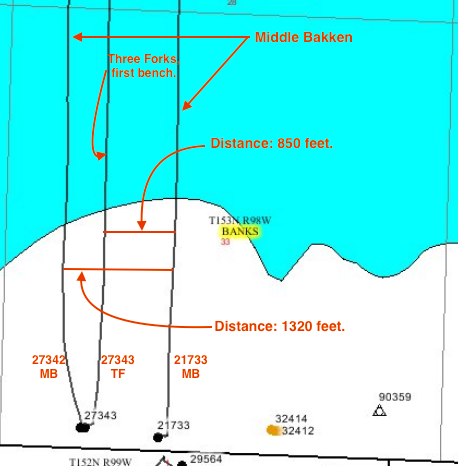 Peak Oil? What Peak Oil? The Lower Tertiary -- Post-Dinosaur Formation -- This Is A Huge Deep-Sea Drilling Story For Many, Many Reasons; Many, Many Data Points: The Stones "Paint It Black" -- September 11, 2016

The Turritella: a leased floater; converted and retrofitted from a Suezmax tanker into an FPSO vessel at the Keppel Shipyard in Singapore by SBM Offshore; will initially work for Shell for 10 years; extension options for up to 20 years

The Turritella: a genus of medium-sized sea snails with an operculum; tightly coiled shells, whose overall shape is basically that of an elongated cone. Comes from the Latin word turritus meaning "turreted" or "towered."


Paint It Black, The Rolling Stones

It's not easy facing facts
when your whole world is black.

No more will my green sea
go turn a deeper blue.

I was curious. The Lower Tertiary is "post-dinosaur." When was it discovered that this geologic formation would produce oil?


The Lower Tertiary is considered by many to be the final frontier of oil exploration in the Gulf of Mexico, where, until recently, production was forecast to decline. The post-dinosaur era geological formation was originally thought to be devoid of oil, but recent exploration has proven otherwise.

Who discovered it? How was it discovered? What is the backstory?


This turnaround began in 1996, when Robert Ryan, then a geologist with Texaco, pursued a hunch about an ultra-deep water geological play. For a fuller accounting of this story, Edward Klump recently wrote a fantastic, in-depth piece for Bloomberg News on the history of this development.

In 1996, four companies—Texaco, Royal Dutch Shell, Amoco, and Mobil— came together to drill an experimental, ultra-deep water well in the Gulf of Mexico. Known as BAHA, the well was 7,625 feet deep, deeper than any that had been previously attempted. Unfortunately, both BAHA 1 (1996) and BAHA 2 (2001) came up dry.

Normally, dry wells would deter future drilling, but the success of the BAHA projects was in proving that a massive trove of oil existed where no one thought possible in the Lower Tertiary—we just needed the technology to get to it economically.

The first oil sourced from the Lower Tertiary began flowing in mid-2010 from the Perdido project, the world’s deepest offshore facility jointly owned by Shell, Chevron, and BP.

Production stalled shortly after start-up, however, as deep water drilling was shut down in the wake of BP’s Deepwater Horizon disaster. Over 4 million barrels of oil spilled, $40 billion in clean up costs, and an incalculable loss of public trust later, oil companies are pushing ahead once again.

Like the shale revolution on land, new technology is the key to the newfound success of Lower Tertiary exploration. New seismic tools allow explorers to see through layers of salt deposits that had previously blocked sub-salt geological mapping. This has also translated into a very respectable success rate—Lower Tertiary drilling has yielded a 40% average commercially viable success rate, well above the 30% global average.


The companies had joined together a block of leases in the Gulf of Mexico that had languished for about 10 years. They were excited by the massive up swell of rock that formed the subterranean structure -- the type of dome that in other places had yielded abundant oil and gas. But doubts ran high about drilling.

The prospect was in deeper water than ever had been drilled -- 7,625 feet. Based on current geologic understanding, the scientists worried the formation wouldn’t contain the kind of oil-bearing sands that would justify drilling such an expensive frontier well. “It was thought that sands settled closer to shore,” said Ryan, who at the time was in charge of Gulf of Mexico exploration for Texaco.

After hours of tense debate, the four partners agreed to drill. It was risky, yes. It also promised to reveal a vast new store of knowledge about the potential of the deep water Gulf. The only way to mitigate the risk of future drilling is to get a well in the ground and find out what’s there.

“Somebody has to drill that first well,” Ryan said, recalling the difficult decision in an interview last month in his Houston office. It’s all about building the story, well by well. “You’re piecing it together,” he said.

How was it named? Who would be the operator?


The next vote -- on what to name the well -- was almost as contentious. Naming privilege generally goes to the majority partner and operator, while the four companies were equal owners. Squabbling followed, Ryan recalls, until one of the geologists in the room, eager to step out for a smoke, hit on the solution: each company contributed a word, and the first letter of each word formed the name. So Brachiosaurus (Shell), Alpha Centauri (Texaco), HI-C (Mobil) and Anaconda (Amoco) became BAHA.

Shell, which had a drilling rig under contract ready to start, was named the operator of the project.

Go to the link for the rest of the story. Hopefully the link doesn't break for a long time. It's a great story.

From the Bloomberg News article linked above:
From Offshore Technology:


Tertiary is the former term for the geologic period from 66 million to 2.58 million years ago, a time span that lies between the superseded Secondary period and the Quaternary.

The Tertiary is no longer recognized as a formal unit by the International Commission on Stratigraphy, but the word is still widely used.

The traditional span of the Tertiary has been divided between the Paleogene and Neogene Periods and extends to the first stage of the Pleistocene Epoch, the Gelasian age.

The period began with the demise of the non-avian dinosaurs in the Cretaceous–Paleogene extinction event, at the start of the Cenozoic Era, and extended to the beginning of the Quaternary glaciation at the end of the Pliocene Epoch.

And, of course, we all remember the Cretaceous-Paleogene extinction event. From wiki again:


The Cretaceous–Paleogene (K–Pg) extinction event, also known as the Cretaceous–Tertiary (K–T) extinction, was a mass extinction of some three-quarters of the plant and animal species on Earth—including all non-avian dinosaurs—that occurred over a geologically short period of time approximately 66 million years ago.

With the exception of some ectothermic species in aquatic ecosystems like the leatherback sea turtle and crocodiles, no tetrapods weighing more than 55 pounds (25 kilos) survived.

It marked the end of the Cretaceous period and with it, the entire Mesozoic Era, opening the Cenozoic Era that continues today.

Posted by Bruce Oksol at 5:46 PM No comments:

Note production profile of #26217, a Middle Bakken well, for the past year:

Note production profile #26216, a middle Bakken well, for the past eighteen months: