April 14, 2016: how Saudi Arabia hopes to transform itself economically. I'm post this article because it confirms the "price point" I made in the original post (pasted one day ago):


People familiar with the National Transformation Plan said it was born late last year in discussions between Prince Mohammed and a few other top officials. At the time, oil was sinking below $30 (£21.1) a barrel, about half the low point that had been expected. That saddled the kingdom with an annual budget deficit near $100 billion and strengthened the case for radical changes.

The plan is still "secret" but based on what is known about it, it's an incredibly small step to be taken by a very, very conservative (medieval) monarchy.


Original Post
The headline caught my attention: Saudi Arabia gets credit rating downgrade, as reported in USA Today. But the real story was in the fourth paragraph:

I've run the numbers under several scenarios. I don't know how "we" get to $60 oil as an average this year. Fitch suggesting that the 2016 (this year's) average will be $35/bbl, suggests that Fitch sees new lows this year.
Posted by Bruce Oksol at 8:37 PM No comments:

The reduction will take place this month in close coordination with all customers in Venezuela to continue servicing those with available cash flow, the Houston- and Paris-based contractor said in a statement Tuesday.

Venezuela, which holds the biggest oil reserves of any country, has been battered by the collapse of prices as most of the government’s revenue comes from petrodollars.

In October, Schlumberger was said to be shifting some of its workers from Brazil to Venezuela, reinforcing the contractor’s commitment at the time as others in the industry pulled back. By late January, Schlumberger said it had entered into a deal with Petroleos de Venezuela SA during the fourth quarter to receive certain fixed assets in lieu of payment of about $200 million of accounts receivable.

The "Venezuela story" is tracked here.
Posted by Bruce Oksol at 10:07 AM No comments:

April 14, 2016: this is pretty cool. Yesterday RBN Energy had a great update on the Panama Canal. Today, the EIA tweets on ship-to-ship propane transfers across the canal. Very, very cool. 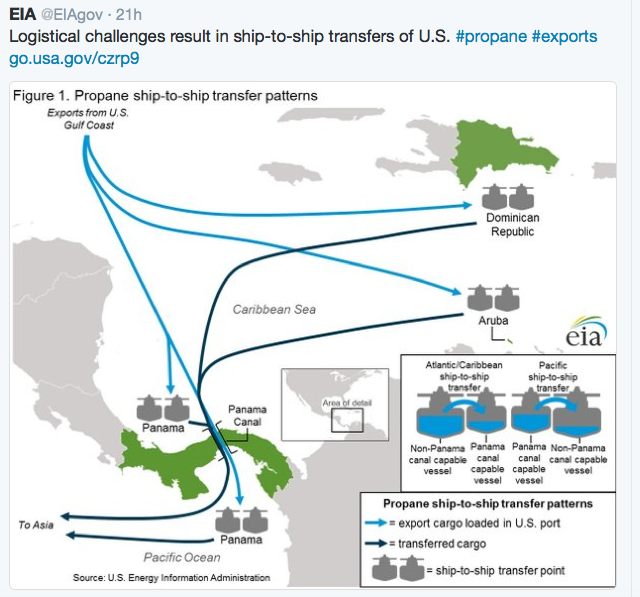 
On Monday, September 3, 2007, dignitaries and thousands of Panamanian citizens watched a huge explosion level a hill near Paraiso, a village north of Panama City. That day launched work on a project that would eventually cost more than $6 billion (U.S.) to double the capacity of the Panama Canal and allow for the passage of longer and wider ships. Nearly nine years later on June 26, 2016, the expansion is finally scheduled to be open for business.   The new canal capacity will be a major event in global energy markets, especially for growing volumes of U.S. natural gas, liquified petroleum gas (LPG) and petroleum product exports.   In honor of this historic development, RBN will take you there!   Rusty will be traversing the canal this Thursday, April 14th and will have the skinny on what is happening in Panama right now, with pictures to show for it.

In today’s blog we set the stage for our voyage across the Panamanian Isthmus.

The Panama Canal expansion has been a frequent topic in the RBN blogosphere.  We did a primer on the subject a few years back and subsequently have reviewed the impact of the expansion on the full range of hydrocarbon markets.

In Courtesy of the Red, White and Blue we saw how the shipping distance from the U.S. Gulf Coast to Asia for large LNG tankers will drop from 16,000 to 9,000 miles when the canal expansion opens, cutting freight costs by more than 40%.

Stayin’ Afloat with the LP Gees examined how the largest LPG vessels carrying propane and butane (very large gas carriers, VLGCS) cannot fit through the Panama Canal today, but will be able to after the expansion goes into service.

And in A Man, A Plan, An Expanded Panama Canal— Cutting Travel Times For LNG And LPG-Laden Ships we examined the benefits that canal expansion offers to LNG and LPG exports.   Today we consider what the upcoming expansion does for the Canal’s capabilities, and what the new capacity will mean for energy markets.

From a GlobalData press release:


The resignation of Iraqi Oil Minister Abdul-Mahdi last month came at a tough time for upstream development in Iraq, which has been losing pace over recent months due to dropping oil prices. Indeed, one of the most significant global oil production growth drivers has been derailed, according to an analyst with research and consulting firm GlobalData.

Despite the country’s wealth of resource, budgetary constraints caused by low oil prices, political disputes, and a prolonged conflict with ISIS have impacted the Iraqi government’s ability to maintain the tremendous levels of capital investment required to realize targeted production levels. This has resulted in the Iraqi Oil Ministry revising its production targets from 9 million barrels per day (mmbd) to 6 mmbd by 2020.

Ali Al-Killidar, GlobalData’s Analyst covering Oil and Gas, says that current production is around 4.3 mmbd, and GlobalData forecasts closer to 5 mmbd by 2020, primarily due to budget cuts faced by consortiums across the whole of Iraq.

Al-Killidar explains: “Generally, revenues from Iraq’s southern fields, which account for 95% of the state’s budget, are not enough to cover all the state’s budgetary expenses and repay oil companies for their investments in the upstream sector, and Abdul-Mahdi warned operators about this. According to Iraqi officials, the potential for a low price environment was overlooked when the contracts were initially drawn up.

“In May 2015, BP agreed to cut its budget for the Rumaila field by US$1 billion from the initially-planned US$3.5 billion, leaving production steady at the current rate of 1.4 mmbd. Although the 2016 budget for the field has not been reported, a similar cut in investment is expected, with the primary focus of the operator shifting to offset the natural decline, at 17%.”

Despite the numerous adverse events the Iraqi oil industry has experienced of late, Iraqi authorities have retaken oil fields from ISIS with international support, opening up the possibility of redevelopment.

Al-Killidar adds: “As a consequence of the conflict, field infrastructure sustained extensive damage during fighting and the Iraqi government has lost up to 400,000 barrels per day of production during the conflict.


“Redevelopment to salvage the fields has yet to be planned, partially due to the lingering threat of ISIS. However, should the group be eliminated, the government is likely to reinvest in the restoration of these fields over the long term.”