A reader noted that of the top 14 states, Colorado was the only state that voted "blue" in the 2016 US presidential election. 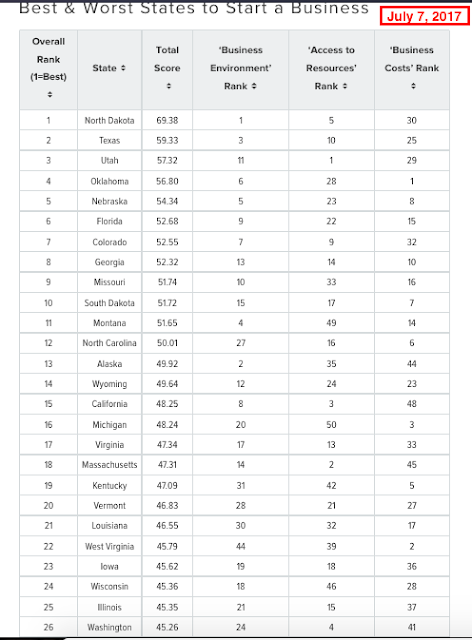 Of course, with Illinois in the top half, the list is suspect. North Dakota, #1, followed by Texas, #2.
Posted by Bruce Oksol at 4:23 PM No comments:

We'll be off the net for awhile -- traveling. But we leave you with this:


The S&P 500 energy index sinks to its lowest level since April 2016, with U.S. crude oil now -2.9% to $44.20/bbl following EIA data that showed continued strength in U.S. oil production in the final week of June just as OPEC exports hit a 2017 high, casting doubt over efforts by producers to curb oversupply.

Sort of reminds  me of this once said by a disbarred president: "Fool me once, shame on you; fool me twice, shame on me.

From the EIA this past week:


The energy component of the Standard and Poor’s Goldman Sachs Commodity Index (GSCI) fell 11% during the first half of 2017, the largest decline for any commodity group in the index.

Other components of the index—livestock, industrial metals, precious metals, and agriculture—had end-of-June prices that were higher than at the beginning of the year. Supply-side developments unique to energy commodities likely contributed to the divergence.

Because two major crude oil price benchmarks, West Texas Intermediate (WTI) and Brent, account for 70% of the weighting in the S&P GSCI energy index, the energy index tends to follow major price movements in the crude oil market. During the first half of 2017, WTI crude oil prices declined by 12%, while Brent prices fell 14%. --- EIA

From the Drudge Report today: 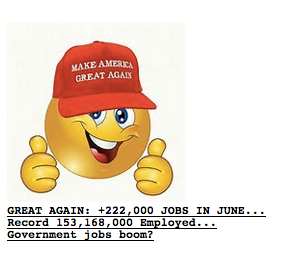 
Hiring surged in June in a surprising show of U.S. economic vitality eight years into the recovery from the Great Recession.

Pay gains remain weak, though, a stark reminder of one of the economy’s key shortcomings.

Employers added 222,000 jobs last month, and hiring in the previous two months was revised much higher. Job gains have now averaged nearly 180,000 a month this year, only slightly below last year’s pace.

Unemployment ticked up to 4.4 percent from 4.3 percent, but mostly for a good reason: More Americans started looking for work, a sign of confidence in the economy.


The Labor Department's Bureau of Labor Statistics also said the number of employed Americans -- which set records in February, March and April -- set another record in June, at 153,168,000 employed.

And the number of Americans not in the labor force -- after four straight monthly gains – dropped a bit to 94,813,000.

US oil export update: From The Wall Street Journal via investorvillage:


It was a gusher few expected.

What began as a trickle of U.S. crude being sold to China is turning into a flood, the result of a surprise American glut that has made the country's oil cheaper than Mideast rivals just two years after Congress lifted a 40-year export ban.

The shift has been greeted with enthusiasm by American producers, who have been trying to pull the sector out of a three-year price slump that has sapped profits and jobs.

Industry executives and local officials are now scrambling to retool ports in the Gulf of Mexico to accommodate the large vessels needed to ship vast quantities of crude around the globe.

While still far below the figure China pays its top suppliers--Russia, Saudi Arabia and Angola--the bill for U.S. oil could come in well above $1 billion this year, up from $150 million last year, according to customs data.

A confluence of factors has helped open the taps.

Falling production from China's own aging fields has forced the country to step up its hunt for new sources of crude. Imports are up 13% this year through May, compared with a year earlier, according to customs data.

The search came as America was opening oil exports in 2015 for the first time in four decades amid a boom in U.S. oil drilling, upending petroleum flows.

Political uncertainty in the Middle East, including the decision last month by Saudi Arabia and other Arab nations to cut ties with Qatar, also has played a role.

This reminds me of the grief the pundits gave SecEnergy Rick Perry when he said the other day:


“Here’s a little economics lesson: supply and demand,” Perry said at the Longview Power Plant. “You put the supply out there and demand will follow.”

About the only thing this does not work for is intermittent energy: put the supply out there (wind farms and solar farms) and folks still don't want intermittent energy if it's going to cost three times what coal or natural gas wil cost.

Whatever.
Posted by Bruce Oksol at 9:54 AM No comments:

Poorly thought out: Volvo, all EVs and hybrids by 2019; Elon Musk batteries to "save" Australia; France to ban gasoline engines by 2040. My two-cents worth: none of this appears to have really been thought out. The only way one gets from "a" to "b" appear to accomplish all this:
Now, today, how coincident: Reuters suggests the same thing -- it appears the world is getting ahead of its headlights and not really thinking things through. From Reuters: EU countries lack investment strategy in shift to low-carbon economy.


Most European Union countries lack a clear strategy for redirecting public and private funds towards more sustainable investments as they shift to a low-carbon economy, the European Environment Agency (EEA) said Thursday.

"Only a few European countries have turned their climate and energy objectives into concrete investment needs and plans to date," it said as it released a new study.

It noted that only Belgium, the Czech Republic, Estonia, France, and to some extent, Germany have a national strategy in place to track spending related to climate mitigation and adaption.

The EU estimates it should have investments of around 177 billion euros ($200 billion) per year from 2021-2030 to meet climate and energy targets, which will require a doubling of current investments in renewable energy and energy efficiency.

Saudi IPO: apparently Saudi Arabia did not get the memo. The world is on the road to banning oil by 2019, starting with Volvo's announcement, and then the French fantasy. Whatever. Saudi Arabia plans to press on with its IPO:


The international spot price for liquefied natural gas (LNG) has been steady-as-she-goes the past few months, within a few dimes of $5.50/MMBtu, but that stability belies the upheavals the LNG industry continues to experience.

The old paradigm of long-term contracts and milk-run deliveries from supplier to buyer is breaking down. New Australian and U.S. liquefaction capacity is coming online fast and furious, exacerbating the global LNG supply glut, and Qatar — the world’s largest LNG supplier, just announced plans to increase its output by 30%.

With LNG readily available and priced to sell, new LNG buyers are entering the fray, developing natural gas-fired power plants that will be fueled by imported LNG. What does all this mean for the next wave of U.S. liquefaction projects and for natural gas producers in the Marcellus/Utica and the Permian? Today we continue our look at the topsy-turvy LNG sector.