My hunch: John Kemp is constrained in what he can write because he is writing for Reuters.

Irina Slav is writing what most of us think.

On another note, I thought this was a joke but it's being reported in multiple places. The US is running short of "used cooking oil," or rather "waste oil." Source: Valero.

This is going to keep me up all night.

At the start of the pandemic, when gasoline demand in the United States tanked, several refiners took that time of slack demand to retool their refineries to process used cooking oil—instead of crude oil. At a time when demand was soft, those sizable federal and state incentives looked pretty enticing.

Of course, many of those projects could take years.

Even without those projects coming online, that feedstock is in such high demand that the United States is “close to being tapped out right now”, Martin Parish, senior vice president of alternative fuels at Valero said on its Q1 earnings call on Thursday, April 22, 2021.

Goldman Sachs: much lower estimate but it appears Goldman Sach is suggesting that "8%+ GDP" will just take a bit longer to show up, link here: 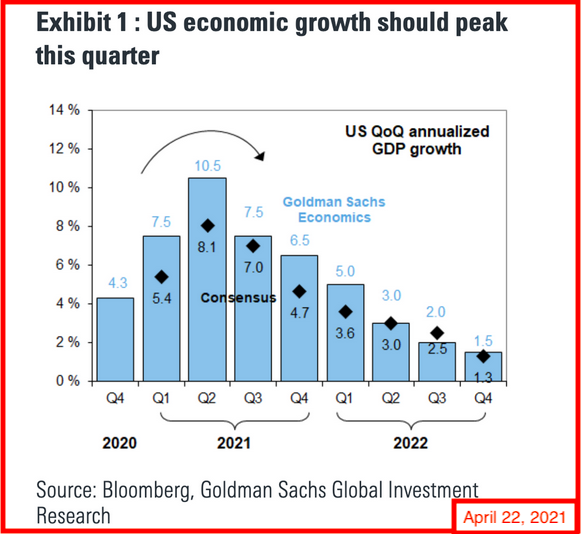 The market today: it was doing great until Biden spoke. This reminds me of the Obama administration. Every time the market was doing very well, it crashed after Obama spoke.

BR's Renegade wells in Sand Creek have been updated. 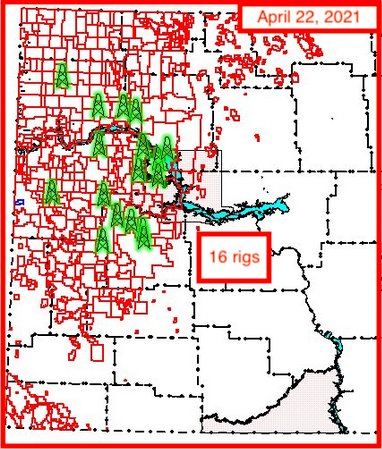 Some millennial fathers are so busy now they actually schedule dinner dates with their school children. I'm not talking about divorced parents; I'm talking about married couples.

And when they go out to eat, invariably the father is on his smart phone -- okay, let's be honest here -- his iPhone. Do millennials that schedule dinner time with their children like they schedule "calls" all day long use any phones other than iPhones?

Yes, the distracted parents. The parents that are so concerned about screen time.

From The Atlantic three  years ago:

The Dangers of Distracted Parenting. When it comes to children’s development, parents should worry less about kids’ screen time—and more about their own.

I didn't read the article. I was distracted by Suzi Quatro on YouTube.

We recently moved to a new apartment. It's been a long time since I've been this happy with a new place to live. May and I now have a sit-down dinner every evening. I pretty much do all the cooking. I certainly do all the [dish] washing, etc.

There are a lot of articles out there about the benefits of meditation. Washing dishes, for me, is my way of meditating. I love doing dishes. May and I have never used a dishwasher in our lives except to store pots and pans.

With the move, we also discontinued all cable television. We have internet and wi-fi only. We are using this time to decide which "television" package we want. If left up to me, I wouldn't get television. It's been about a month now and I don't miss television at all.

Having said that, the "deals" out there are incredible once you "cut" the Spectrum "thing."

It is truly amazing.

So now I'm watching the most incredible resolution on the biggest Apple desktop computer available -- and now Apple is coming out with an even "better" desktop computers -- the new ones are 11 millimeters thick -- that's one millimeter more than a centimeter. There are 2.54 centimeters in an inch.

But we're looking at our television options. As noted earlier, if up to me, I wouldn't go back to television. But May has some favorite shows -- so that will probably determine which "streaming" service we will go with. May will likely go with Hulu. I have to admit the YouTube package looks pretty good.

Dinner tonight was delayed until 9:15 p.m. May took Olivia to her soccer game. Olivia plays on two different "club" teams as well as the high school soccer team, which took third in the state this year.

In the game tonight, her team won, 2 - 1. After the game it was noted that her "other" team was playing the next game. May asked if Olivia would be playing that game also. Nope. Apparently some rule that club team players can only play one game per day. The reason Olivia was asked to play the game she did, other than the second game? The game she played, according to her coach, was a must-win game and for a must-win game the coach wants Olivia.

Okay. I guess I've rambled enough. I still can't believe how crisp the resolution is on this huge Apple computer screen. I can only imagine what Olivia will be watching when she's my age.

Modified? Instead of removing the backbone, I just left it in; a whole easier. 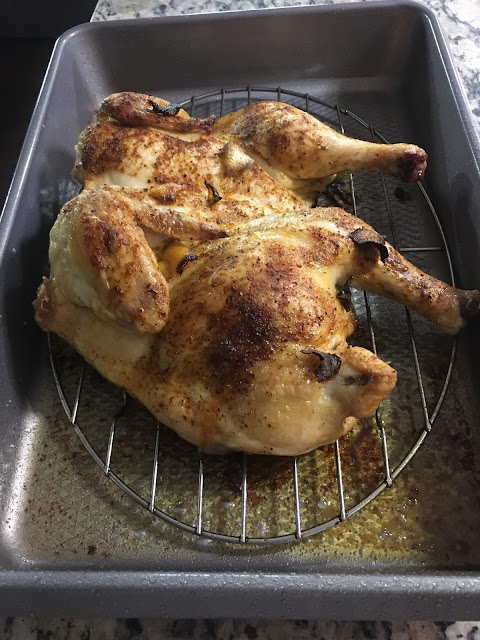 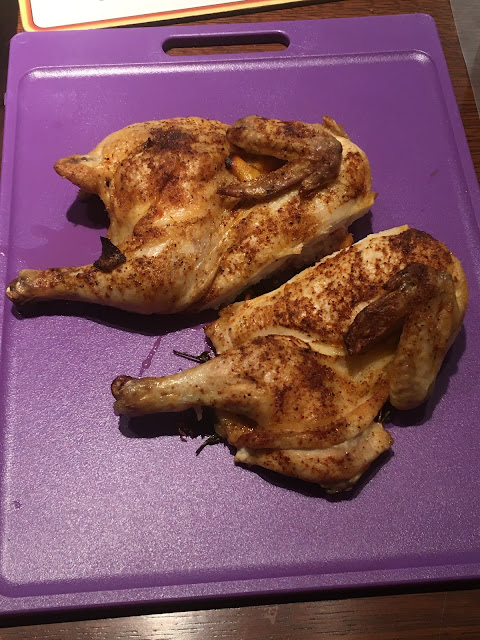 The WPX Blue Racer wells are tracked here. These are just incredible wells. This well produced 333,000 bbls of oil in less than a year. 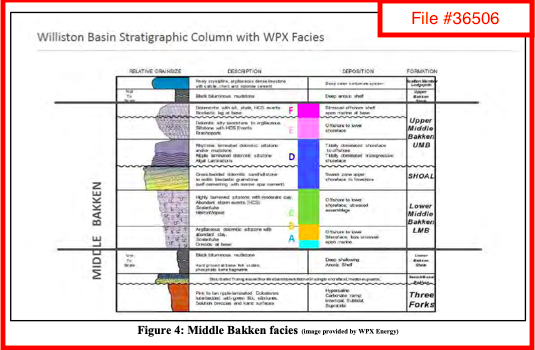 Consumers paying ever more for energy, and yet there's a glut. 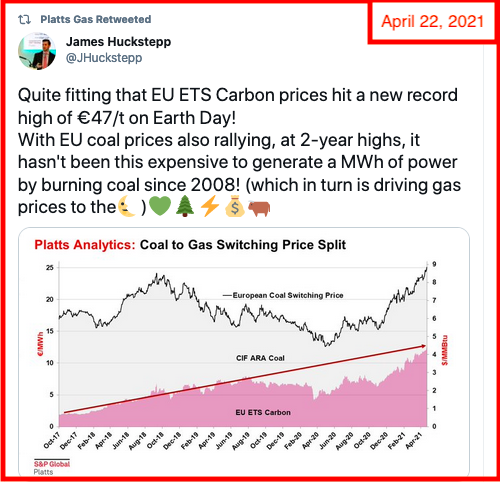 Email ThisBlogThis!Share to TwitterShare to FacebookShare to Pinterest
Labels: Coal

Natural gas fill rate, link here, back above the five-year average. Except to have something to do, one almost wonders why we track this: 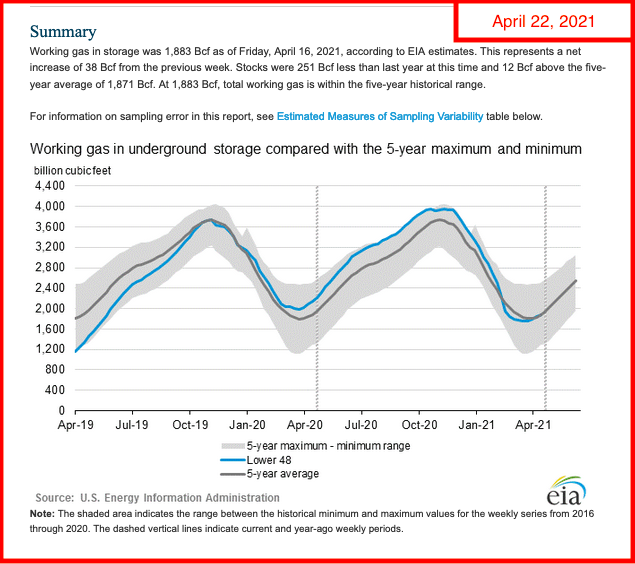 Talking with folks who have been members of a union, every time the union went on strike, it took up to two years to get back to where they were prior to the strike. The big winners in a union: the union management.

Traders look for any reason to take a profit: the president makes a speech about something that won't happen for months, if not years, if ever (increasing taxes on capital gains), and if it does, will effect big earners only -- and the Dow drops 200 points. All I see is another buying opportunity.

One certainly gets the feeling that operators have "shut down" awaiting the outcome of the DAPL.

Wow, with regard to the blog, when it rains, it pours. So much information coming out today, Thursday, Earth Day, April 22, 2021.

Chevron spokesman Tyler Kruzich said that the shortage at several of its valley gas pumps began over the weekend.

“We are working to resupply those stations as soon as possible,” Kruzich said.

The company said that with travel and capacity restrictions lifted, the West Coast has seen increases in fuel demand “that may outpace the available supply at times during the month.

US equity markets: there must be 135+ companies reporting earnings today. I am only interested in one.

Dividend increases: I mentioned this earlier this week. We're going to start seeing some nice dividend announcements. And yesterday, we saw some:

DFS: story on earnings must have been written by a robot; template, fill in the blanks:

Discover came out with quarterly earnings of $5.04 per share, beating the Zacks Consensus Estimate of $2.88 per share. This compares to loss of $0.25 per share a year ago.
These figures are adjusted for non-recurring items.

This quarterly report represents an earnings surprise of 75%. A quarter ago, it was expected that this credit card issuer and lender would post earnings of $2.37 per share when it actually produced earnings of $2.59, delivering a surprise of 9.28%. 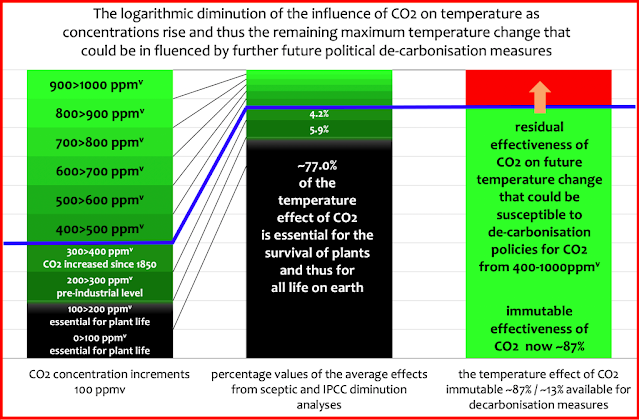 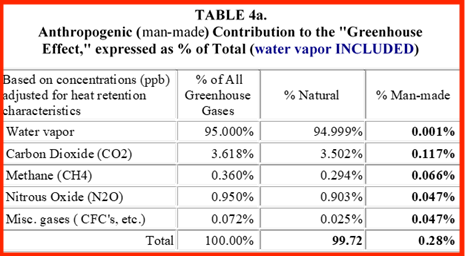 From the reader who sent me these two graphics:

Here's my #2 ranked CO2 table, from Fred Singer about 20 years ago.

The late Singer is probably the CO2/sunshine-and-breezes-fraudsters-most-hated scientist right up there with Dr Richard Lintzen, who was the first to explain how ethanol consumed more energy than it produced (not counting the near toxic cattle feed byproduct).

It took years for that to become common knowledge. Another ten years, and a $trillion of wind, solar and battery storage, that hoax will also be "common knowledge, except in liberal minds where there are a lot of strange things bouncing around..

Notes From All Over -- The Salmagundi Edition -- Enerplus Reports A Very Nice Mandaree Well -- April 22, 2021

Apple, Inc: first to reach $2 trillion; which two companies will be next?
what to know about Apple's recently announced new hardware -- Joanna Stern in WSJ;
after opening in the "red" this morning, turned "green" by 10:00 a.m. CDT;

RBN Energy: renewable natural gas and its possible role in hydrogen production. Excuse me while I laugh.

We’ve been writing on hydrogen for a few months now, covering everything from its physical properties to production methods and economics. Given the newness of the subject to most folks, who have spent their careers following traditional hydrocarbon markets, we have attempted to move methodically when it comes to hydrogen. However, we think that things may get more complicated in the months ahead.

Why, you may ask.

Well, the development of a hydrogen market — or “economy”, if you will — is going to be far from straightforward, we believe. Not only will hydrogen need some serious policy and regulatory help to gain a footing, the new fuel will have to become well-integrated into not only existing hydrocarbon markets, but also some established “green” markets, such as renewable natural gas, or RNG. So understanding how renewable natural gas is produced and valued is probably relevant for hydrogen market observers. In today’s blog, we take a look at the possible intersection of natural gas, particularly RNG, and hydrogen.