Posted by Bruce Oksol at 9:11 PM No comments:

I will be off the net until late this evening; family commitments.

I guess the jobs report was horrendous today. I didn't check until just a few minutes ago. Brandon put a good spin on it.

It's an incredibly gorgeous day here in north Texas. If we're lucky, we won't get any winter this year. After last year's devastating winter, then -- on average -- these two winters will be right within historical norms.

Then, Olivia has a soccer game out at UT-Dallas.

EVs; could end in tears. Link to Irina Slav. For me, this is a sector that could really reward investors who "call" it correctly. I'm betting:

Cambo oil field: link to Julianne Geiger. I had not even heard of this field until Shell said it was going to exit this UK North Sea play. Siccar Point, with 70%, will be there alone unless another partner comes in.

How to re-inflate a flat tractor tire. Don't try this at home.

Methane emission reductions: mostly from divestments. Love the screenshot. They must use the same spellchecker I use.

"Remain in Mexico." Brandon excited to get this going again. LOL. Heads are exploding over at The NYT and The Washington Post.

"Greta on the Shelf" doll will track your climate sins. Link here.

APPL: I have not looked at the market since the "flash crash" last Friday, November whatever, 2021, the day after Thanksgiving, figuring that I had been wiped out based on the headlines, so I was surprised to see that AAPL was still way higher than what it was not too long ago. So I considered it very, very expensive. But it must have been even higher: one analyst says AAPL is now a buy due to "fresh weakness in Apple's stock." Say what? Weakness? And one month ago it was significantly lower. Whatever.

Texas: wow, I can't believe how incredibly unseasonably warm it is. If I recall correctly, two weeks ago they were calling for freezing weather in Texas. It was short-sleeve weather last night, well past 10:00 p.m. when we attended the annual Grapevine (TX) Parade of Lights, the annual Christmas parade. Several years ago I remember "freezing" at this same parade. Last night I was wearing a short-sleeve Hawaiian shirt and blue jeans.

Comment: so, two weeks ago, "they" were forecasting freezing weather for Texas by now, and yet it's Hawaiian t-shirt weather, just two weeks later. And yet, "we" know global temperatures will be exactly 1.8 degrees warmer one hundred years from now. Which, by the way, is much, much better than being 1.8 degrees colder a century from now.

California: the LA Times is reporting that we could see a snow-free California in as little as 35 years. Haven't "they" been predicting that since, like, 1994?

Covid-19: wow, look at this. Brandon says he's going to require insurance companies to reimburse folks for home Covid-19 testing. I assume there will need to be some guidelines, otherwise some folks might start testing twice a day, or even more often, depending on their social calendars.

My favorite chart, link here: it's hard to read the x-axis, but the site says this is data through the end of October, 2021. Note, the total amount of cash in US money market accounts rose slightly in October, 2021, compared to the previous month. This is a lot of money on the sidelines, as they say. And this is well before the "flash crash" (Friday, November 26, 2021) when folks really started pulling money out of their equity accounts, no doubt moving it into money market funds. It will be interesting to see the November, 2021, data. 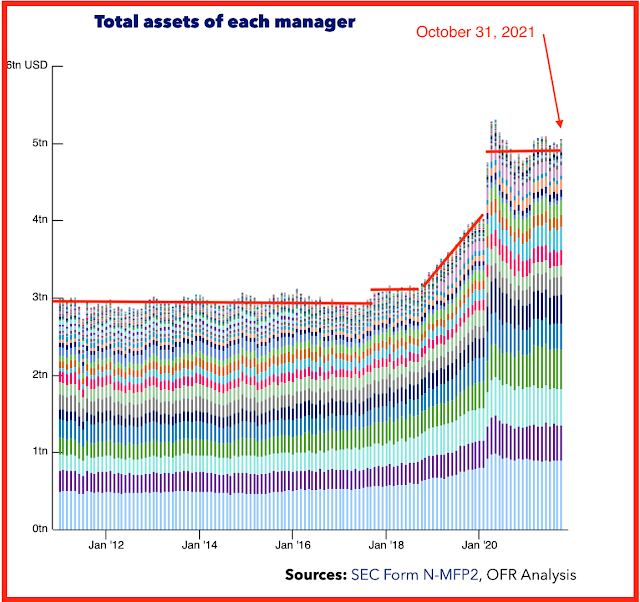 Safe To Get Back Into The Water? One Well Coming Off The Confidential List -- December 3, 2021

Investing: I haven't looked at the market nor have I watched any CNBC since the flashcrash one week ago, and I'm not watching CNBC today either. I won't look at the market until next week. I'm not sure when I will get back to CNBC.

Investing: I mention all that because I did cheat a bit today and took a look at a number of semiconductor ticker symbols and some semiconductor stories. Wow, a lot is going on. We'll get to the links later but the highlights that I remember:

Investing: so, it appears it's safe to get back into the water. I bought a sizeable (for me, LOL) chunk of a Big Pharma drug company yesterday; one that isn't marketing a vaccine but it otherwise involved with Covid

Tesla: it's done. It's official. Tesla's headquarters are not in Texas. No long a California company.

Enbridge: I assume I noted this but I really can't remember. Increased its quarterly dividend ever so slightly. Up from 66.7 cents to 67.4 cents. Record date and payment date already behind us.

Brandon and the price of gasoline: his jawboning is working. Gasoline prices have dropped over the past week or so. Link here. But don't get too excited yet: others think his policies -- some call them blunders -- will push oil to $100. Link to Irina Slav. Some say we'll be luck if oil stays below $100.

Shale and the flashcrash: again, Irina Slav -- this oil price slump may not be bad news for US shale. I assume the flashcrash greatly affected the share prices of shale companies (I haven't checked and won't check any time soon).

This shale story is quite remarkable. How much crude oil does the US produce? I guess I could say I don't have the number in front of me but I think it's about 11 million bopd; historically about 10 million bopd? And when you look at the numbers -- sure, a lot of states produce crude oil but if every state shut down production, including Alaska and California, the three shale plays and GOM would easily keep US production at 10 to 11 million bopd. In round numbers? And except for the GOM, they're all swing producers. Yes, I said that.

Speaking of amazing, by the way: apparently Alec Baldwin didn't pull the trigger. The gun fired itself. At least that's his story. No, it was not an SNL sketch. But it will be in a few years.

WTI: up almost 3% in early morning Friday trading; I guess that OPEC+ announcement was greeted with a big yawn from investors.

Rig count: NDIC says the rig count jumped to 37 yesterday. If accurate, but it's not, if accurate that would have been a six-rig jump overnight. But it's not. The "Definitive Rig Report" for December 3, 2021, has been posted.

Carbon dioxide is not the most potent of the greenhouse gases, but it is by far the most prevalent, which makes it a primary focus of efforts to protect the planet. And while a lot of attention is being paid to ways to reduce CO2 emissions and to capture those that are produced, it’s important to remember one key fact: There’s strong demand for CO2 for a variety of commercial uses, from enhanced oil recovery and fertilizers to industrial processes and beverage production. In other words, CO2 has real value to certain parts of the global economy and capturing CO2 for sale to these customers must be factored into the decarbonization equation. In today’s RBN blog, we take a closer look at the industrial CO2 value chain.

The push to ratchet down global greenhouse gases (GHGs) has come to shove, and anyone who works in the energy industry or invests in it now needs to be familiar with CO2, its market dynamics, and the relationship between it and hydrocarbon markets. That new reality prompted us to take a deep dive into CO2 and, in Part 1 of this series, we focused on the midstream and downstream components that have been instrumental in the development of the U.S. CO2 market. We discussed how CO2 is typically transported (as a supercritical fluid) and looked at the U.S. pipeline networks that exist to help move it from place to place. There are more than 5,000 miles of operational CO2 pipe in the U.S. owned by 29 companies, with the leaders being Kinder Morgan, Denbury Inc., and Occidental Petroleum.

From the American Chemical Society, and if you can't trust the ACS, who can you trust ...

It's true that water vapor is the largest contributor to the Earth's greenhouse effect. On average, it probably accounts for about 60% of the warming effect ...