NiSource: NiSource apparently plunged 7.9% today. Barron's did not have an explanation. I know nothing about the company but a quick google search certainly suggested a number of concerns these past few years involving management. Be that as it may, this is probably the real story: natural gas prices "plunged" today based on fundamentals (supply/demand -- the weather is not cooperating). Even with today's "plunge," the shares are paying only 2.65% -- at that rate might as well buy bonds. Speaking of which, with the Fed raising rates, utilities are selling off. SRE is another example.

After a nice run-up in the market today, right now futures suggest more of the same tomorrow: 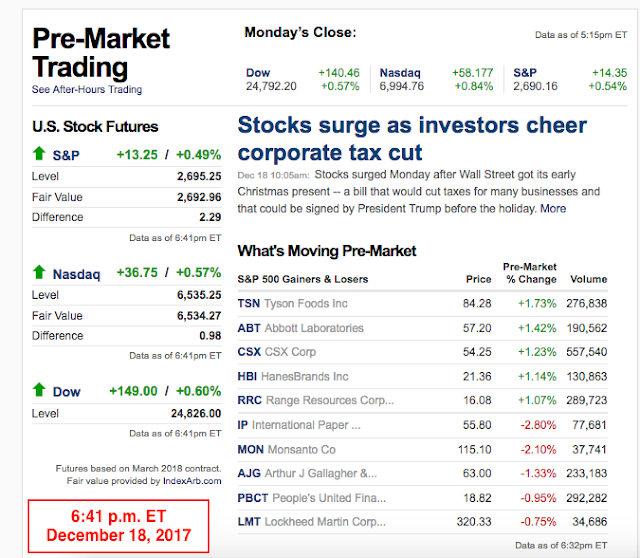 Later, 8:19 p.m. ET: it looks like the above numbers were a  "hangover" from today's action. Now, the Dow futures are almost flat.
Posted by Bruce Oksol at 6:00 PM No comments:

I was wondering when Mike Filloon was going to get to Oasis; they have had some great wells. Also, now that Oasis has cracked the code on the Bakken, maybe they felt they could do the same in the Permian.

Link over at SeekingAlpha:


Oasis has become a very good operator. It has kept costs down and improved production per foot significantly over the past few years. We pulled the production data of 91 Oasis locations in North Dakota completed after January 1st of 2016. Four horizontals produced over 250 KBO in 12 months of well life. Only one location was a one-mile lateral. The rest were between 9,000 and 10,700 feet.

In summary, OAS is performing very well and enhanced completions are pushing production per foot higher. The increase of 53 KBO is very good, and natural gas production has tripled. This was done with comparable lateral lengths. OAS is a risky play and a name we do not own. The Delaware purchase has been interpreted as bearish, but the geology is much better than any it currently holds.

OAS has been an excellent operator and done an excellent job keeping costs down. It will be interesting to see how this plays out in west Texas. We do not own OAS, and still think it has a difficult road ahead. The leverage is concerning, but if oil prices spike it could see significant upside. There is considerable risk going forward.

This is a must-read; too much to excerpt.


The new storage and pipeline infrastructure in the United States is so significant that it is likely to have a transformational impact on the crude oil market for years to come. These changes are likely to spur more trading in US domestic grades and will magnify the role of WTI has global benchmark.

The catalyst for this transformation has been the sharp rise in US oil production, and more recently, the lifting of the export ban on US crude that occurred at the end of 2015. In order for the US to turn itself from a net importer to exporter, several key pipelines had to be reversed. At the same time, oil refiners and storage operators along the Gulf Coast set about increasing the amount of available storage capacity. A number of new terminals are in the process of being built along the US Gulf Coast to handle the rising number of ships arriving to load cruse destined for the international markets. These infrastructure changes will transform the US into the marginal supplier of the world than a regional supplier. This will allow producers to take advantage of arbitrage opportunities that pre sent themselves beyond the US shores.

There are several subsections:
For future reference: 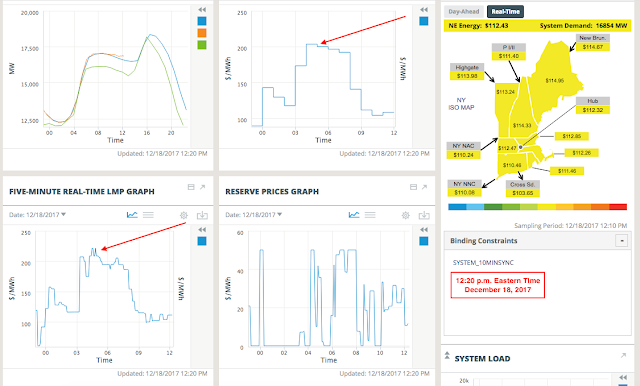 Too much non-dispatchable wind and solar and not enough natural gas?

For comparison: PJM -- under $23/MWh. See comments below:


For comparative purposes, the wholesale spot pricing in 13 state PJM region - found at PJM site/Data Shortcuts/Operational Data - is under 23 bucks.

This is why businesses all over the world are looking at relocating there.

The problem lies in the bars at the right side of the graph: 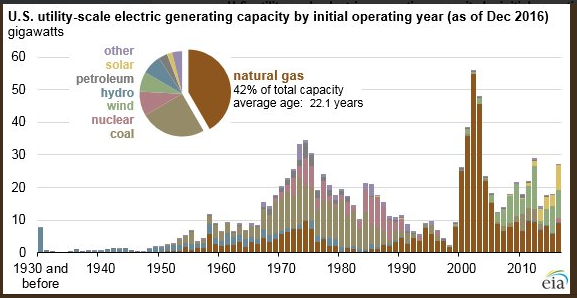 Wells coming off confidential list over the weekend, Monday

There will be a lot of economic data released this week prior to Christmas weekend at the end of the week.

Home builder sentiment at the highest since July, 1999. Link here.

The market since Trump has been elected, including a list of stocks that have doubled since his election.

All three indices are likely to close at new records today. Some confusion on CNBC but apparently if the Dow 30 sets a new record today, the index will have set a record for the number of times the Dow has hit a new high in one year. 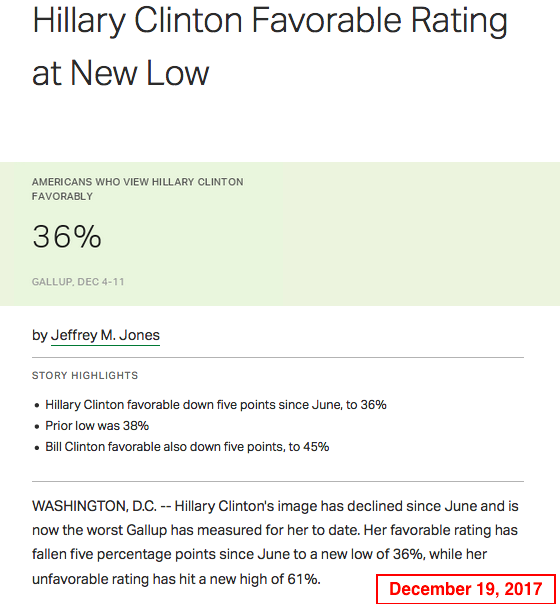 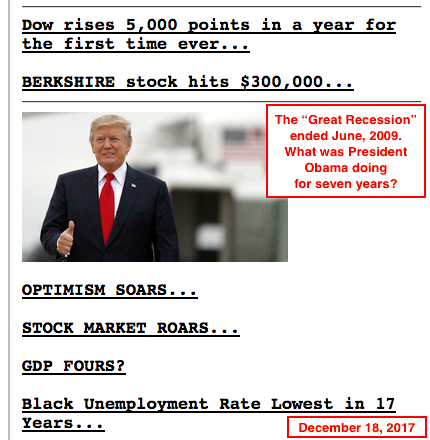 ETP: gets FERC okay for additional Rover drilling.
Posted by Bruce Oksol at 9:10 AM No comments:

July 13, 2019: it appears some of the recently drilled wells are now completed/fracked; being reported; older well back on line.

April 10, 2019: it appears Slawson has completed / is completing the Jore Federal wells. See this post.

May 4, 2018: map updated. Compare this map with the map in the original post. 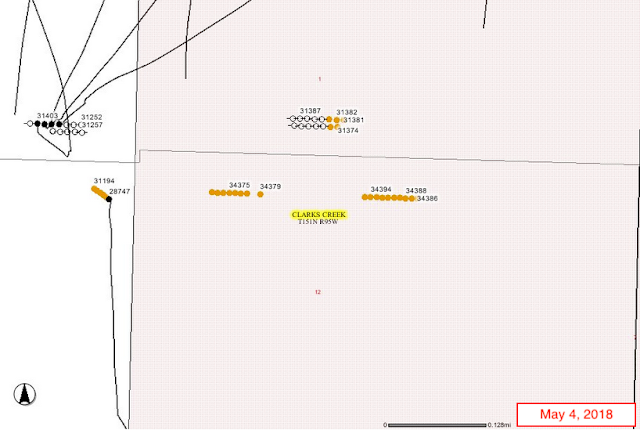 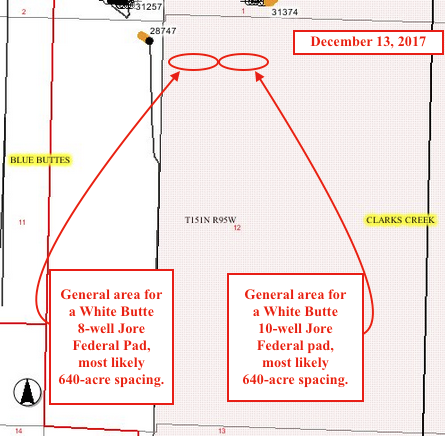 Posted by Bruce Oksol at 5:41 AM No comments:

Note: the NDIC map server appears to be slightly "degraded" this morning. The permit numbers for pad wells appear not to be posting.  I assume this is a temporary problem.

A no-show: it's being reported that Senator John McCain will not be able to vote on the tax bill. He is recovering at home from a recent hospitalization secondary to his brain cancer. It looks like the bill will be signed, but it's still not a slam dunk.

$100 billion should make this chart look better. It is now being reported (in The New York Times) that Prince Salman hopes to "recover" at least $100 billion from the rich tycoons he rounded up earlier this autumn. In the graph below, the kingdom was losing about $5 billion month-over-month in foreign reserves. It will be interesting to see how this graph changes.

Break-even (again): From What's Up With That:


Number of the Week: $56.60: According to Platts (subscription required), the energy consulting firm Wood Mackenzie estimates the “weighted average break-even” for a barrel of crude produced from North Dakota shale is $56.60. Generally, the estimates include a modest profit.

Areas with higher estimated costs include: Niobrara (Rockies), $75.5; Canada Oil Sands, $70; Deepwater US, $63; Deepwater Angola, $73; Offshore Nigeria, $64; and Shallow Water Europe, $60. The estimates reviewed did not include Texas. No doubt, the petro-states of OPEC are concerned with hydraulic fracturing in the US.


RBN Energy: why condensate flipped from cheap to expensive and why it may flip back.


The combination of rising condensate demand as new splitter capacity came online and falling conde supply resulted in just what you’d expect — higher conde prices. Worse yet for the companies that made throughput commitments for those new splitters, the once-favorable price differentials between conde and light-crude benchmarks West Texas Intermediate (WTI) and Louisiana Light Sweet (LLS) have been turned on their heads, and a number of splitters are operating at far less than capacity.

Today, we continue our look at the roller-coaster world of conde, this time focusing on conde prices and differentials, and on the forces that may change the conde market once again.

Crude oil and condensate are categorized by their API gravity (API standing for American Petroleum Institute), which is a measurement scale (in degrees) of a petroleum liquid’s specific gravity — the lighter or less dense the crude, the higher its API gravity number.

Superlight crude oil and condensate (or, as it’s commonly called, conde) is at the far end of the crude-oil spectrum, with an API gravity of 50 to 55 degrees for superlight and more that 55 degrees for conde (according to the gravity breakdown used by the Energy Information Administration, or EIA, in its Crude Oil and Lease Condensate Production by API Gravity data series). As we said earlier in this blog series, superlight crude and conde can either be refined, exported or blended with heavier crudes — or (for conde) run through a splitter. A splitter uses atmospheric distillation to separate conde into its component fractions to produce intermediate, semi-finished blend stocks like naphthas and distillates that are processed further at refineries.

A major resurgence of superlight/conde production like this would only require crude prices staying pretty much where they are now — and the development of new conde-related infrastructure. If it happens, there would be more than enough condensate to meet the demand for existing splitters (and a 35-Mb/d splitter that Targa Resources is building at its Channelview, TX terminal), refinery appetite for super-light material, and significant volumes of neat conde exports or crude blends that include conde and/or superlight crude.

Posted by Bruce Oksol at 4:57 AM No comments: