Remember those blue boxes: long distance phone calls for free, decades ago? Now, the back story.

At this clip below, start at 6:15 to find out where this all began:

Buffett Owns A Railroad And Is The 7th Largest Natural Gas Pipeline Operator In The US -- September 17, 2016


On September 6, Enbridge Inc. announced its purchase of Spectra Energy Corp. Enbridge currently operates 1,800 miles of large-diameter (24 inches or greater) natural gas pipelines in the United States. Before its acquisition of Spectra Energy, Enbridge was the 15th-largest holder of large-diameter U.S. natural gas pipeline miles (including co-owned pipeline), and Spectra ranked fourth in the nation with nearly 9,800 miles.

Kinder Morgan Inc., with 32,000 miles of large-diameter pipeline, has more than double the mileage of TransCanada Corporation, which acquired Columbia Pipeline Group in July 2015.

The merger of Energy Transfer Equity LP (third-largest holder) and Williams Companies, Inc. (fifth-largest holder) that was recently canceled would have resulted in a large natural gas pipeline conglomerate ranked second to Kinder Morgan, which owns about 19% of all U.S. pipeline. 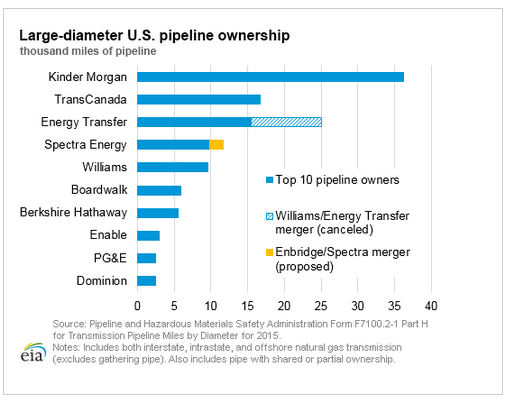 Recap:
Now, in the North:
Burgoyne surrenders, October 17, 1777; the Battle of Saratoga had changes the course of the war; American General Gates the victor but Benedict Arnold deserves the credit
by October 23, 1777, news of Burgoyne's surrender reached the eastern seaboard; celebrations from Boston to Portsmouth, NH
Geo Washington, King George III, and finally, Ben Franklin in Paris all got the "electrifying" news
Benedict Arnold laid up in bed for the fall / winter of 1777 - 1778; Arnold had been reinstated as major general
Now, in the South:
General Williams Howe (army) had accomplished almost everything he had planned
Howe had bested Geo Washington; the Brits had reached the rebel capital Philadelphia
but Americans had "barricaded" where the Scuykill flows into the Delaware, preventing his brother's (Admiral Howe) ships from reaching Philadelphia (which sites on the Delaware)
the river barricade known as a chevaux-de-frise
Howe unable to take Philadelphia; he resigned, fall of 1777
but Howe still tried to take Philadelphia
Americans' Fort Mifflin, at the confluence of the Schuylkill and the Delaware was the Americans' last hope
Geo Washington's HQ at Whitemarsh, PA, about 16 miles north of Philadelphia
Geo Washington rode south; wanted to see the Siege of Fort Mifflin
Geo Washington had entered one of the most difficult and frustrating periods of his life: Gates had succeeded at Saratoga; Geo Washington had lost Philadelphia
22-y/o Alexander Hamilton was Geo Washington's aide at the time
Gates and his top lieutenants were conspiring against Geo Washington
Fort Mifflin was finally lost, but American resistance was incredible -- p. 184
Brits take Philadelphia
Geo Washington "pondered" what to do next
Gates was the here of the day; mostly due to Benedict Arnold
Geo Washington not doing well; appealed to his generals for advice
Geo Washington did not attack Howe at Philadelphia; he knew that if he lost, the revolution might be over
Geo Washington establishes inter HQ at Valley Forge, 20 miles from Philadelphia
December 19, 1777 -- June 19, 1778: map of engagements, p. 186

The other day it was reported that Oklahoma was shutting in 32 salt water disposal wells in light of the recent 5.6 magnitude earthquake centered in Pawnee, northeast of Oklahoma City.  Thirty-two. Hold that thought.

In this month's NDIC hearing dockets:


something I had not seen before: "on a motion of the Commission to consider rescinding Order No. XXXXX entered in Case No. XXXXX which was an application of _____________ pursuant to NDAC § 43-023-03-88.1 for an order authorizing the drilling of a saltwater disposal well to be located in ...." There are 22 such cases before the commission (different case numbers, different companies, different locations, case numbers, inclusive, from 25264 to 25285). It appears that the plan to drill 22 saltwater disposal wells is "now on hold."

If I read that correctly, because of lack of activity in the Bakken, the commission will put "on hold" 22 proposed, new, saltwater disposal wells.

A very, very trivial story, but it helps me put things into perspective.

Why the gadfly is soooo wrong.

The Brits are not dumb. Think Brexit.

The Brits are willing to pay "up" for quality. During my four years in norther England, the most common SUV I saw was the Land Rover, made by Jaguar, owned by Tata:

And the farmers in Yorkshire used these SUVs for tough jobs, not urban driving.

Unlike the US, distances in England are very, very small.

EVs will represent a major sector in the automotive industry ten years from now.

Great Britain is absolutely the perfect country for EVs.

And that brings us back to Hinkley.

Owen Bennett-Jones has a great article in the current issue of the London Review of Book, "The Overlooked: Deobandis."

All of us have heard of Sunnis, Shias, and Wahhabis, but I doubt not one reader out of a 1,000 has ever heard of the Deobandis. I certainly had not. From the linked article:

Deobandi graduates are encouraged to spread the word by establishing new madrasas.

The would-be shoe bomber Richard Reid had Deobandi connections, as did the 2006 transatlantic airline bomb plotters and two of the 7/7 attackers.

The Deobandis, apparently, are a major group in England right now. Expect to see a New York Times article on them any time now.

But don't confuse madrasas with Madrases.

I suppose I am the only one in the world who had not heard of a Madras until recently. In Frank Caiafa's The Waldorf Astoria Bar Book, c. 2016, p. 3, in the introduction, Madras is mentioned. Once. And that's the only entry. Even wiki does not have a page devoted to the Madras. From Caiafa's book:


I grew up in a New York City much different from the one that exists today. When it came to bars in the 1970s and '80s, for instance, their open room-termperature vermouth bottles were a year old and spoiled...bartenders probably couldn't tell you much more than that their Scotch was from Scotland and their beer from Milwaukee.

On another note, I would be hard-pressed to recommend a better book than Caiafa's for those interested in the genre. I enjoy it for the history of the Waldorf-Astoria during the Golden Age. For whiskey: Heather Greene's Whisk(e)y Distilled: A Populist Guid to the Water of Life, c. 2014, is one of the best. Also, surprisingly interesting and fun to read, Amy Stewart's The Drunken Botanist: The Plants That Create The World's Great Drinks, c. 2013. But it is disappointing that Stewart does not list "cranberry" or "madras" in her index.

About a month ago I talked about the fast-growing area just to our northeast -- Collin County, north of Dallas: Plano, Allen, Frisco, and McKinney.

Keeping up with the NEA.

Don sent me an interesting article on the new "buzzword" in education: equity, not equality.

For some it might be a hard concept to understand so the state of Georgia has provided a graphic to help explain what they mean by equity: 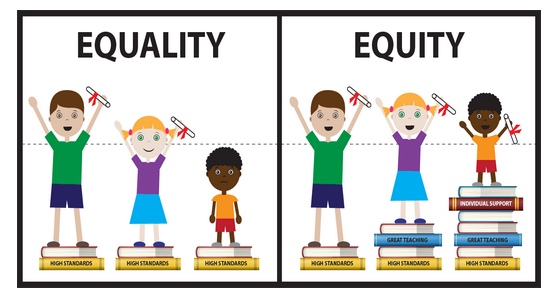 In the graphic, they stack a bunch of books under the child to the far right and a smaller stack under the middle child so they can "reach" the same level as the child on the left, who will be given no new books or resources under the "equity" plan.
Wouldn't it be a whole lot cheaper and a whole lot easier to simply "dumb down" everything for the two on the left, and then all three would be equal? Oh, that's right. They've been doing that for quite some time now.

I don't have the dog in the fight: I don't have a smart phone. Never have. Never will.  My Samsung clam shell must be five years old or older. But it's "fun" to read all the complaints about Apple removing the 3.5 mm headphone jack (and replacing it with something so much better).


Steve Jobs - Courage
Posted by Bruce Oksol at 7:31 AM No comments:

The top story this week, without question, is the "rebound" in North Dakota crude oil production. Actually, it wasn't much of a rebound, but at least for the moment, the downward trend in production was halted. But what was remarkable was this happened when very, very few wells were being drilled, and it seemed, even fewer wells were being completed. In fact, the number of DUCs actually increased.

I don't think analysts really appreciate what it means to have the number of DUCs actually increase when fewer wells are being drilled in the first place.

Nationally, this has to rank among the top stories: operators paying upwards of $50,000 (and more) / mineral acre in the Permian. In addition, several stories coming out about the potential of the lower Tertiary, a geologic "formation" not thought to be productive.

Perhaps the other often overlooked national story is the fact that gasoline demand still breaks all previous records. It was also noted this past week that US crude oil imports remain higher than "usual."

Note: there is a lot of news coming out of the keystoned Dakota Access Pipeline -- the situation has entered legal purgatory and the entire situation is completely chaotic, irrational, and politicized. For now, the project is dead. And the project will remain dead as long as it is agreed that the Native Americans "own" riparian rights to all waterways in America, three miles on either side of any rio, brook, creek, stream, river, pond, or lake.

Operations
Director's cut here, here, July, 2016, data
July, 2016, production spreadsheets
Petroshale to site eleven wells in one section; that section has an old vertical Sanish well that produced in excess of one million bbls of oil over a 30-year period
Update on Zavanna's Gust well in Long Creek
Update on Whiting's Behr well that Mike Filloon highlighted back in 2013; now over 1 million bbls total and still going strong
An example of the manufacturing stage in the Bakken

Miscellaneous
NY Times had a nice feature article on North Dakota Maah Daah Hey Trail
Update on Mark Papa; active in the Permian
China has a peak oil problem
Operating costs: the Bakken vs Saudi Arabia
Saudi bidding for another refinery along the US Gulf Coast
Posted by Bruce Oksol at 6:56 AM No comments:

The recent stories about operators paying upwards of $50,000/mineral acre for the Permian resulted in a bit of sidebar discussion. One reader noted that the Williston Basin did not have the "stack" of producing payzones that the Perman did.

This is from an old, old NDIC publication, undated but data seems to date it about 2000, before the North Dakota Bakken Boom. One can get an idea of how old this chart is by three data points: 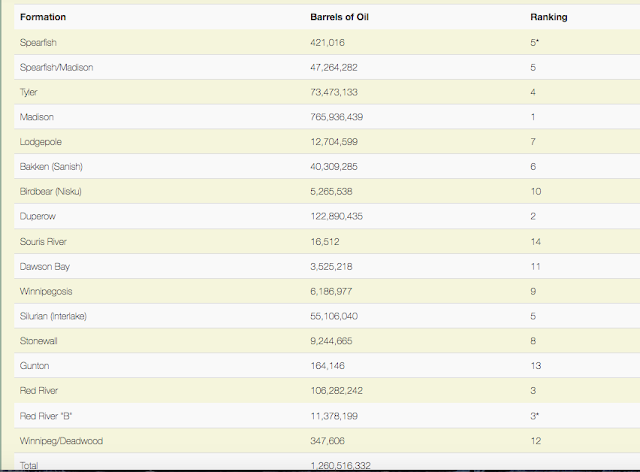