Ebola continues to spread in Africa.


There have been 759 confirmed or suspected cases of the haemorrhagic fever in Guinea, Liberia and Sierra Leone, the World Health Organisation (WHO) said on Tuesday, with 467 people dead.

"This makes the ongoing Ebola outbreak the largest in terms of the number of cases and deaths as well as geographical spread," the WHO said in a statement announcing a two-day conference in Ghana to be attended by 11 West African health ministers.

"Decisions taken at this meeting will be critical in addressing the current and future outbreaks," it said.

Since West Africa's first ever epidemic of the deadly and highly contagious fever broke out in Guinea in January, the WHO has sent in more than 150 experts to help tackle the regional crisis.

Despite the efforts of the UN agency and other health workers, there has been a "significant increase" in the rate of new cases and deaths in recent weeks, the WHO said.


If this "thing" in Iraq goes as it appears to be going, once the sand settles, I may have to add a fifth center of gravity: IranSyriaIraq. Which leads us to Saudi Arabia. One word: terrified.

That didn't take long. The (London) Telegraph is reporting that Saudi Arabia is moving 30,000 troops along the Iraqi border, concerned about the spread of "foreign fanaticism," also known as "jihadism" (see below):


Saudi Arabia has sent 30,000 troops to reinforce its long northern desert border after Iraqi troops withdrew from the other side.

Fighters from Islamic State, the jihadist group, and its allies have already seized frontier posts on Iraq's western borders with Syria and Jordan. The southern border with Saudi Arabia, which regards itself as vulnerable to the threat of jihadism, is more than 500 miles long.

Large parts of it are with Anbar province, the centre of Islamic State power in Iraq and now almost entirely under the control either of the group itself or of Sunni Arab tribes that have allied with it.

The last serious incursion into Saudi Arabia also came from Iraq, after Saddam Hussein invaded Kuwait in 1990. Iraqi forces were eventually repelled from the Saudi town of Khafji, the following January, but only after they were attacked from the air by American jets. [The Saudis can assume they cannot count on US air support this time around.]

Since then, the border has been relatively stable and far more concern and attention has been paid to the southern border with Yemen, which is mountainous and hard to control, and where there have been two separate, long-running insurgencies, one jihadist, and one led by a Shia breakaway movement.

Posted by Bruce Oksol at 1:13 PM No comments:

Happy Fourth Of July -- The Market Closes Early Today; I'm Wrapping It Up Early For Now

From Yahoo!In-Play:
I assume this is the "Seaway Reversal." If folks recall: the Keystone XL was to have capacity of about 850,000 bopd.  There is a "Seaway" tag that will take you other Seaway stories on the blog.


Five years after the Great Recession officially ended, most states still haven't regained all the jobs they lost, even though the nation as a whole has.

North Dakota is an exception.

In May, the overall economy finally recovered all 9 million jobs that vanished in the worst downturn since the 1930s. Another month of solid hiring is expected in the U.S. jobs report for June that will be released today.

Yet 32 states still have fewer jobs than when the recession began in December 2007 — evidence of the unevenness and persistently slow pace of the recovery.

Other data points at the linked article:
That's really quite phenomenal: the population of North Dakota was around 650,000 people (before the boom) -- that includes everyone: men, women, and children; workers and non-workers. To add 100,000 new jobs in the past seven years is ... well, stunning, as The Bismarck Tribune writes. And even more jobs are opening every day. Absolutely stunning.

When you get right down to it, 32 states lagging is not a good commentary on the economy overall. People coming to work in North Dakota are not coming here for the weather. Five years into the recovery and a trillion dollars in stimulus, and here we are. Thirty-two states still struggling.

Quick: name the country that accounts for 67% (2 out of 3) of Europe's deliveries for Tesla.

The country is oil-rich, and the people are environmentally conscious.

But the numbers are in for the most recent quarter: deliveries to Norway dropped almost 50% in the latest data. Apparently Tesla sales in Norway are not on fire. One wonders if word-of-mouth about battery reliability in cold weather has anything to do with this?

Tesla may have to depend on China to fill the gap. 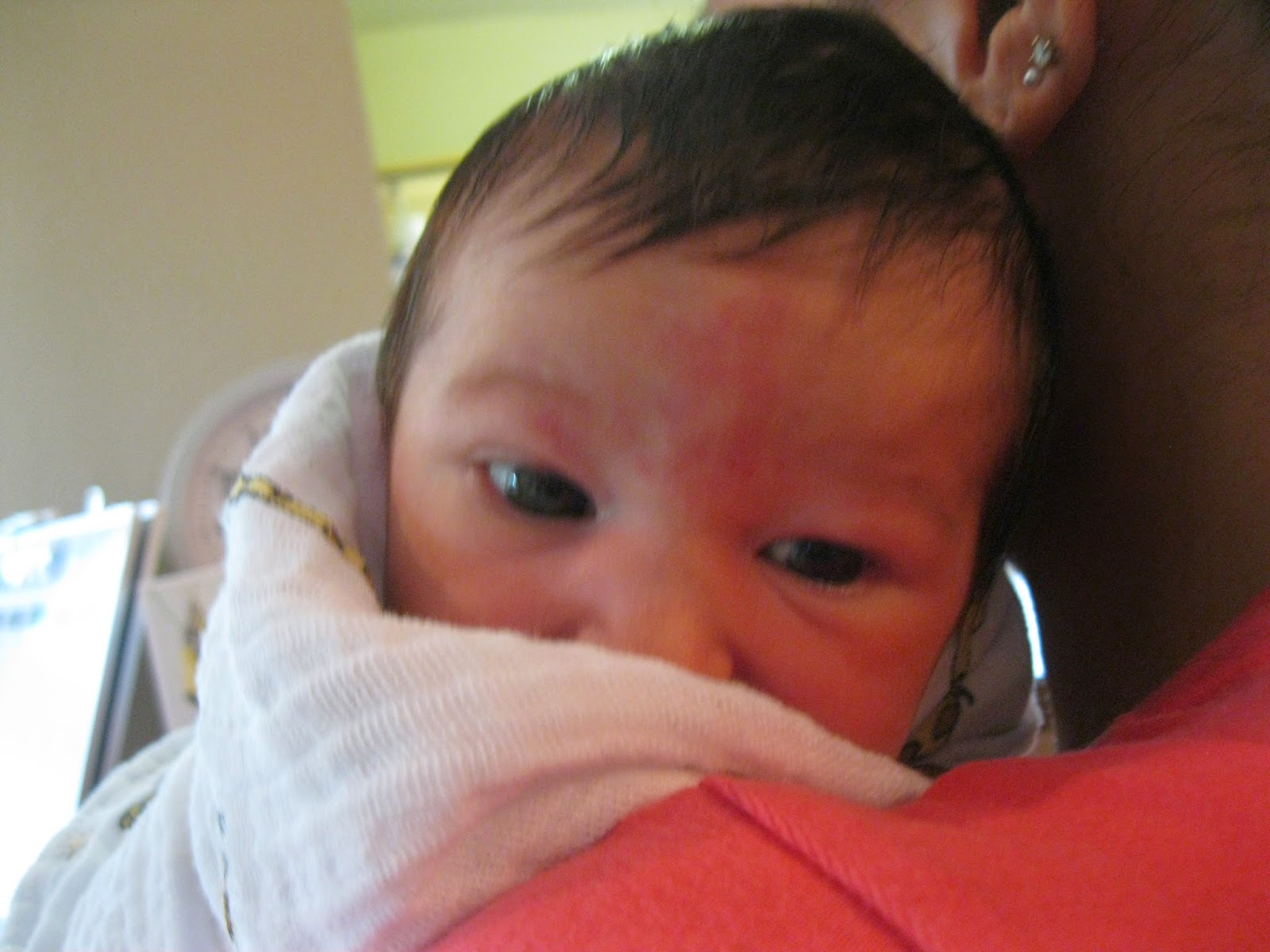 Our third granddaughter at two days of age or thereabouts.
Posted by Bruce Oksol at 9:45 AM 2 comments:


RBN Energy: anyone interested in NGL fractionation in Louisiana, and EPD, needs to read this article.

Production of mixed NGLs has risen sharply in the past five years, and the pace of growth is only increasing.  Almost all of these mixed NGLs are the product of natural gas processing plants, which have increased in number by about 125 or 25 percent over the five year period.  Fractionation facilities separate mixed NGL streams (sometimes known as “y-grade”) into so called “purity” products - ethane, propane, normal butane, isobutane and natural gasoline (also known as C5+) that are used in a wide variety of petrochemical, heating, gasoline blending and other markets. Mont Belvieu (about 30 miles east of Houston) has traditionally been the center of the fractionation world because of geography and geology. It is located near several oil and gas production regions; it is in the heart of petrochemical production; it is along the coast (necessary for both importing and exporting); and it sits atop one of the world’s largest salt dome formations (which provide ideal storage capacity for all kinds of volatile hydrocarbon products that must be stored under pressure). Given the US’s new leadership in the availability of low-cost NGLs, another key reason for Mont Belvieu’s importance is its proximity to existing and planned olefin cracking capacity and to existing and planned export facilities for propane, butane and other NGLs. As we have said in many other RBN Energy posts, the US shale revolution is spurring a major revival of petrochemical production, particularly along the Gulf Coast, that will result not only in increased olefin production (petrochemicals such as ethylene, propylene, etc.),  but in increased exports of olefins and their derivative products.  Because of its leader status, Mont Belvieu prices for NGLs and purity products also serve as the benchmarks, or prices against which NGL prices in other parts of the US are referenced.

I guess Hamas was upset it had been pushed off the front page of Mideast newspapers by events in Syria and Iraq, so they execute three Israeli teenagers (I think one had US citizenship) and now Israel retaliates -- and that's the headline: violence escalates in Israel. John Kerry, I assume, will be in Tel Aviv this weekend to commemorate a new global warming museum. Of course, that begs the question where we will find POTUS this weekend. And no, the White House chef is not adding crack cocaine to the pies. At least according to Michelle.

Shiites are in training in holy city.

Ukraine presses ahead with offensive.

Gas prices wallop wallets. And, in other news, the Keystone XL is still dead. I think I read somewhere the company is starting to sell that all that pipe that has been sitting in staging areas for five years. Don't quote me on that; I could be wrong. So the recovery is working, at least for those invested in oil and gas companies: Americans will be paying more for gas than on any Independence Day weekend since the record highs during President Bush's presidency in 2008.

Same ol', same ol': US stocks hit record. That was yesterday. Today the market closes at noon EDT and indications are we will hit yet another record.

If you thought the VA was a shambles, remember: the same folks running the VA are running ObamaCare. From today's LA Times: ObamaCare: legal aid groups demand -- yes, demand -- answers on Medi-Cal backlog. Sound familiar? Backlog? Opening paragraph: with low-income Californians continuing to face months-long delays in getting healthcare coverage, health advocates are calling on the state to explain within ten (10) days how it will address lingering Obamacare application delays. (Hint: California will look to the VA for answers.) [Update, later, 10:01 p.m. CDT: I wrote that tongue-in-cheek about California turning to the VA to help with ObamaCare application delays. It turns out that's exactly what was going on: while veterans were dying waiting for healthcare appointments at the VA, the government directed that VA employees switch from processing VA applications to processing ObamaCare applications. I can't make this stuff up.

Let the fights begin: abortion foes get up close and personal after court erases buffer zones. What were they thinking?

*About that jobs report:

This is huge: it should be an end to the discussion of extending benefits for the long-term unemployed. Bloomberg is reporting:


The number of people out of work for 27 weeks or longer -- the so-called long-term unemployed -- decreased as a percentage of all jobless to 32.8 percent, the lowest since June 2009.


Job creation surged beyond expectations in June and the unemployment rate fell to an almost six-year low, underscoring the strength of a U.S. labor market that will help spur a rebound in growth.

The addition of 288,000 jobs followed a 224,000 gain the prior month that was bigger than previously estimated, Labor Department figures showed today in Washington. The median forecast in a Bloomberg survey of economists called for a 215,000 advance. The number of long-term unemployed Americans fell to 3.1 million, showing they're having greater success finding work.

I think Reuters mentioned some time ago that more people working means there are more paychecks being cashed.

I see Bloomberg has continued to call the 1Q14 collapse (their word, not mine)is now nothing but a slump in the rear-view mirror. It's all hunky-dory from here on out. I think there was a lot of concern on Wall Street that the Hobby Lobby Supreme Court ruling was going to kill the job market. Maybe that's next month.

Let's see. The last data point: the four-week average -- it was probably in the article, but I couldn't find it and I have to move on.
Posted by Bruce Oksol at 8:55 AM 2 comments: