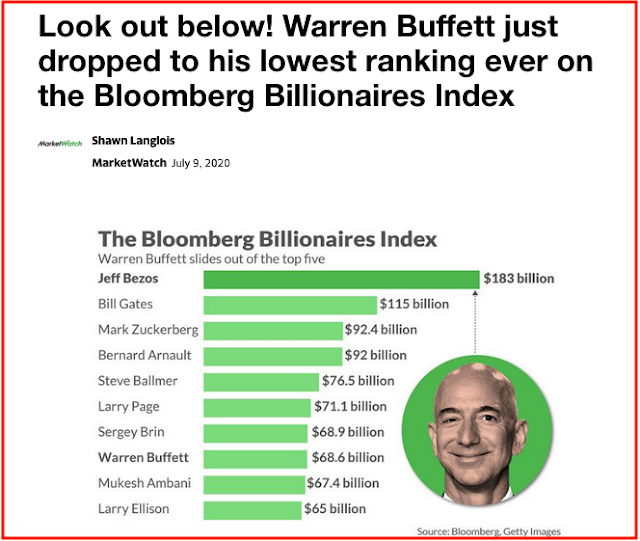 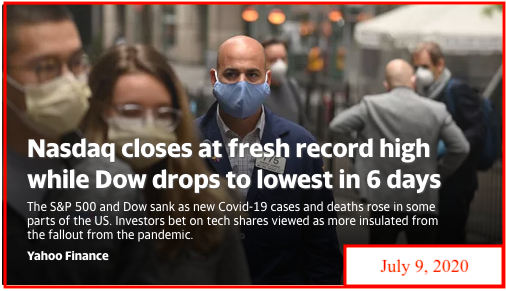 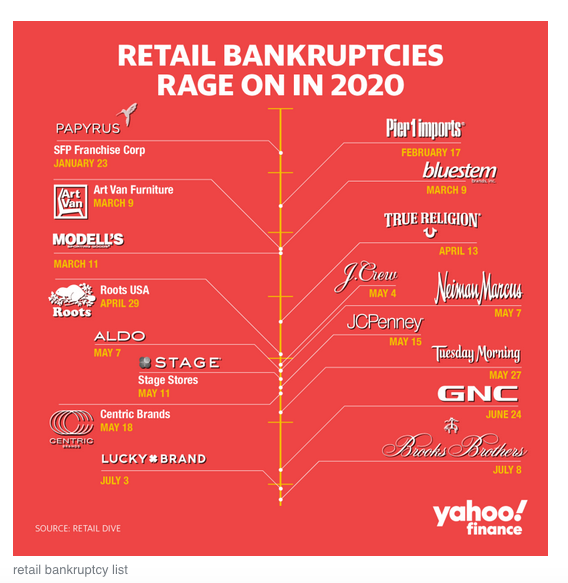 Fake story line: these bankruptcies had less to do with Covid-19 and more to do with the companies themselves.

Gap: the gap between the investor class and the non-investor class will continue to widen. The oil sector is the worst sector to be in right now and yet COP maintains its dividend. 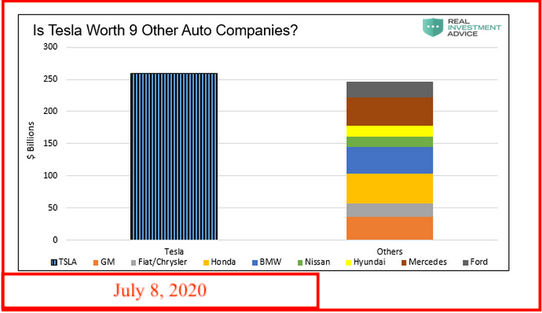 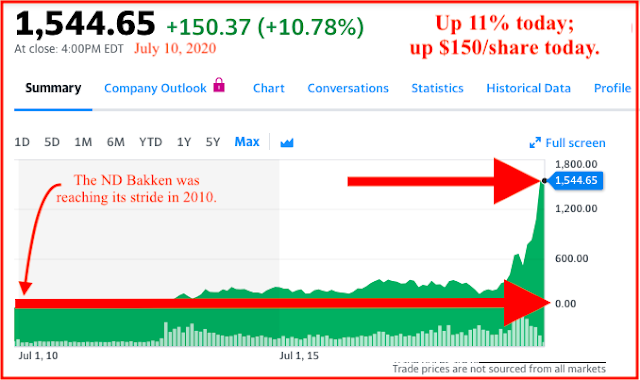 Some people are drawing parallels between the present economic situation and the "Crash of 1929." Possibly, but I don't think so.
Posted by Bruce Oksol at 10:23 PM No comments:

It's going to be a mess: twenty-five percent of NYC renters have not paid since March. Link here.  It's one big snowball rolling downhill.
The good news: NYC should have more than enough natural gas even without new pipelines. Thank goodness Amazon did not locate there.

No wonder Tesla looks like such a better alternative. LOL.

That Redhead? Reminds me of a story:


A blonde is walking down the street and a car pulled up next to her. The man in the car says to her, ''What do you have in the bag?'' The blonde replies: ''I have chickens!''

The man thinks for a moment and says, ''If I can guess how many chickens you have in the bag, can I have one?''

The blonde thinks that it sounds fair and replies, ''Okay, but I'll make the bet even better! If you can guess exactly how many chickens I have in the bag I will give you BOTH of them!"


Malagueña Salerosa, Once Upon A Time In Mexico

And, of course, from Mexico to Paris:


The Phantom of the Opera

It's hard to believe, but I think I've seen the stage play not less than three times in London. Okay, maybe only twice. I forget. While stationed with the USAF near London for three years, we saw a lot of London plays.
Posted by Bruce Oksol at 8:44 PM No comments:

One Hundred Eighteen Permits Renewed In The ND Bakken This Past Week -- July 10, 2020

Commissioners also heard a report on the Bakken Restart Task Force’s work, which is looking at ways to speed recovery for the North Dakota oil and gas sector.

Helms said a comprehensive review of regulations affecting the oil and gas industry is under way, to see if any need to be lifted.

Some things have already been implemented. Among these, a $100 fee for renewing a drilling permit has been waived beginning July 1 through Dec. 31.

A Bakken well costs in the neighborhood of $6 million plus or minus a couple of million. To renew a permit for one year: $100.

My hunch: if there's a direct correlation between permit renewals and waiving the $100-renewal fee, let's see what happens when the state cuts the production and/or extraction taxes. LOL.

One comment: lots of work left to be done in the Bakken.

This is really quite unprecedented. Over the past five days a total of 118 permits were renewed in the ND Bakken.

The NDIC averages about six new permits each day. In fact, this week, the NDIC reported only nineteen new permits. In comparison, there were more than twenty permits renewed each day this week.

I do not ever recall seeing this happen before.

Much could be said about this. Look at the operators below.

While kayaking with Sophia on Grapevine Lake, north Texas: 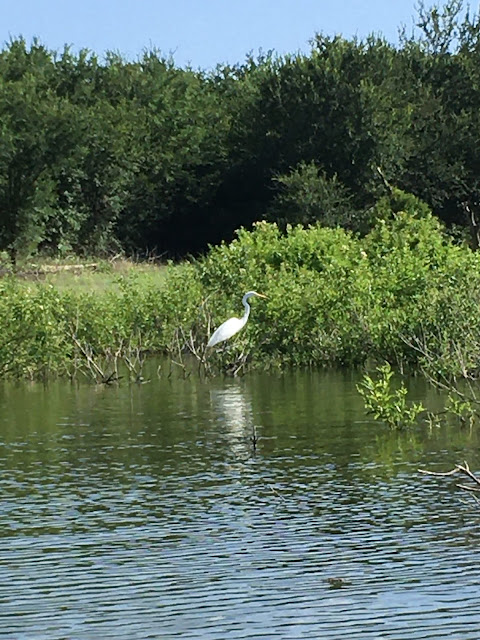 
One comment: lots of work left to be done in the Bakken.

If I have this correct, this will be another 18-well super-pad like the 18-well EN-Jeffrey super-pad to the east. 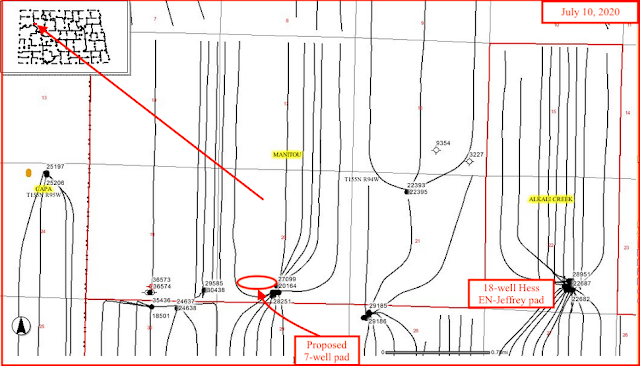 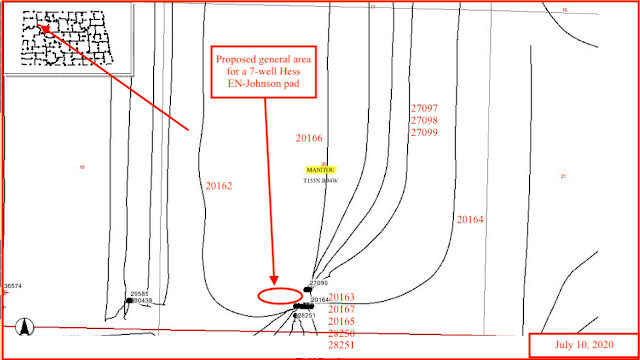 The 18-well Hess EN-Jeffrey super-pad is tracked here.
Posted by Bruce Oksol at 7:17 PM No comments:


If I have this correct, this will be another 18-well super-pad like the 18-well EN-Jeffrey super-pad to the east.

The only thing we have to fear, is fear itself. I wasn't going to look at the market today. Futures and headlines suggested a "bad" day on the market. Then, while closing windows left open from yesterday, I saw AMZN. Are you kidding me?
At the close:
Surge: said to be related to Gilead's news that they may have oral anti-viral


The EIA dashboard links:
I can't recall if these have been previously reported. Look closely at the numbers: the Eagle Ford is a monster. 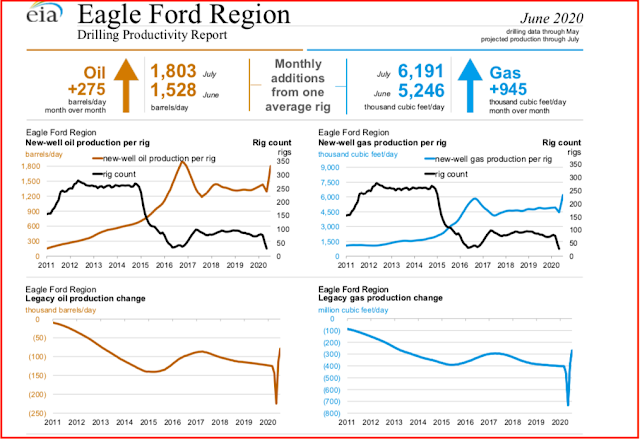 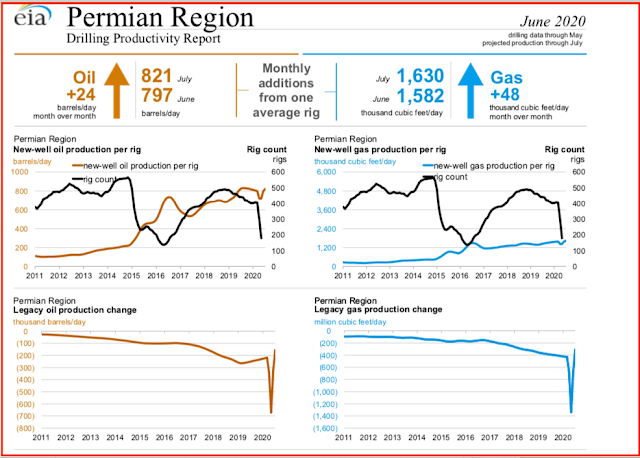 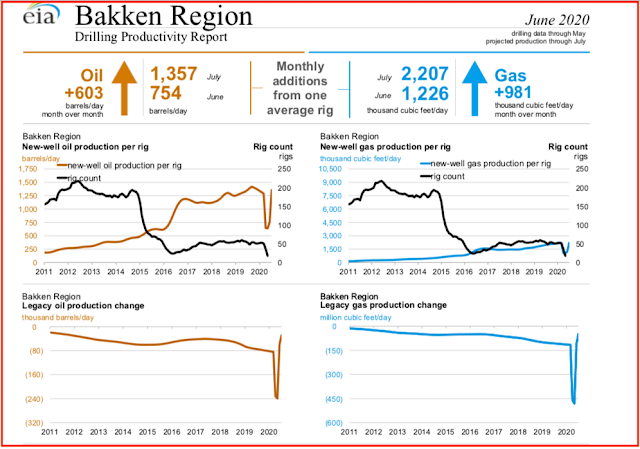 A/c is turned on so high at Tutor Time, Sophia needs to wear a light jacket during the day.

Old Navy -- without question --  has the nicest light jacket selection for this age group, and prices are stunningly low with huge discounts. Retailers need to move winter, spring, summer inventory -- affected by C-19 -- for fall arrivals. 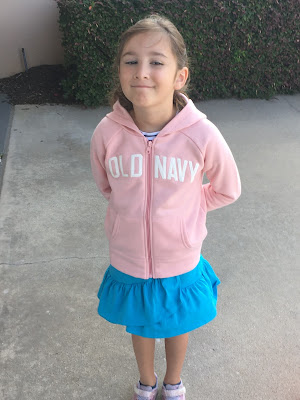 Running out of dinero? Robert De Niro. Cuts estranged wife's monthly credit card limit from $100K to $50 (per month); she says she can't make it on that. Link here.

Schadenfreude: word of the day.


U.S. LNG exports in recent months have gone from providing a consistent and growing source of demand to balance the U.S. natural gas market to now being a drag on demand growth and the gas market balance. Rising storage surpluses and record low prices in Europe and Asia, along with relative strength in the U.S. national benchmark prices at Henry Hub, have turned the economics upside down for U.S. exports and led to widespread cancellations of contracted cargoes. Feedgas deliveries and cargo liftings at Lower-48 terminals both have plummeted to the lowest levels since early 2019, despite domestic liquefaction capacity climbing by more than 4 Bcf/d since then. Moreover, the dynamics that led to the current predicament are likely to persist at least through injection season and potentially even beyond that to a certain extent. Today, we provide an update on how cargo cancellations have affected U.S. gas demand for exports, overall and at individual terminals.