A reader sent this link. Apparently white-tailed deer in the US are now testing positive for Covid-19. It will be interesting see how the death of deer taken by a hunter and subsequently tests positive for Covid-19 is "classified": three options, I suppose: natural death; acute lead poisoning; Covid-19.

DUCs: data provided by a reader.  Gradually chipping away at all those DUCs.

Active rigs: NDIC reports 32 active rigs but I did not go through the list. There are often duplications and sometimes SWD wells included; but we're running about 30 - 32 active rigs in North Dakota.

If you came here for the Bakken, come back Monday. Or scroll down or click on the links at the sidebar at the right.

I have cleared my schedule for the day. I'm starting Thanksgiving week early. Today is devoted to Sophia and her older sister, Olivia.

Shadows In A Mirror, Chris Isaac

I Believe, Chris Isaac
Posted by Bruce Oksol at 8:44 AM 2 comments:

A reader sent me the link to this essay over at Powerline. Briefly,

The “Petrarchan” stereotype in criticism is that of a love poem, generally a sonnet, in which an idealizing male lover submits to his chaste mistress and is continually rebuffed by her, a rejection that only renews his anguished pleas.

"... an idealizing male lover ... continually rebuffed...by his mistress, a rejection that only renews his anguished pleas."

Coincidentally, I was re-reading parts of Nicholas Boyle's two-volume biography of Goethe. Goethe's woes sounded identical to those of Petrach. It is alleged that Goethe's Wilhem Meister led to an epidemic of 18th century European suicides. I was curious: was there a connection between Goethe and Petrarch.

Not only that, but even Goethe himself recognized his "petrarchian" condition, link here.

It turns out there's a whole "industry" of petrachian analysis and linkages, but they tend to be one-hundred percent literary.

For the enterprising college freshman who needs a thesis for some literary course, how about this: "From Wolfram and Petrach to Orbison and Isaak." LOL.College course credit while listening to some of the best music ever.

If "Pretty Woman" by Orbison is not the quintessential petrarchian ballad I don't know what is. Wow.

But if you want to go the whole Monty, take out your Forever Blue Chris Isaak CD for nine of the best petrachian ballads of all time. There are ten songs on the album but I don't care for the first song (I usually skip it) but the remaining nine are incredible and all petrarchian.

Here's the album. Skip the first song and listen closely to the last nine to see how Chris Isaak can sing abo ut nine unrequited loves. Nine out of nine.  Leonard Cohen did one better with ten songs on one CD unapolagetically called Ten New Songs.

Things Go Wrong, Chris Isaac
Posted by Bruce Oksol at 8:28 AM No comments:

From Brandon's EIA, no less. Link here. I'll bet someone is having a "come to Jesus meeting" with Jennifer M. Granholm today, in her office, now!

Great map at the link.

I love the map: in one 2" by 3" I now understand the geographic layout of the Gulf Coast naturla gas pipelines and related infrastructure. 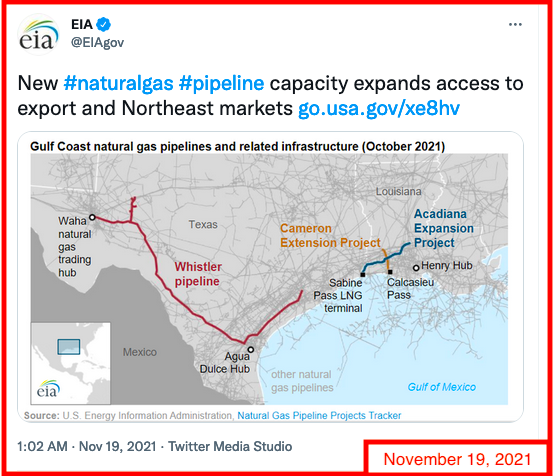 Posted by Bruce Oksol at 5:52 AM No comments:

Clearing Out The In-Box -- Friday Before Thanksgiving Week -- Friday, November 19, 2021

Let's start with Apple. A lot of Apple news.

Why I love to blog: I posted this story before Barron's posted it. Barron's: Ford dropped a bombshell on chips. GlobalFoundries stock is taking off. I mentioned it before the close of yesterday's trading. Hopefully you all took note. LOL. Link here.

FAANG: will soon be changed to FAANNGRZ --

Sweetgreen: my hunch -- this won't be "a thing" a year from now.

Andrew Ross Sorkin: needs to get a life. He was all excited about Sweetgreen because you could order your salad with or without dressing on the side. Who knew? Apparently, with the Sweetgreen app one can order a salad and request the dressing be "on the side." Which reminds me, why did the chicken cross the road? To get to the other side. LOL.

And, oh, by the way, chicken has more tryptophan than turkey. Per ounce, not per serving.

Lunar eclipse: yup, it really happened as predicted. I was up at 3:00 a.m. CT to see the "red moon." I wore special glasses to protect any chance I might burn my retinas looking directly at the moon. Fortunately I caught the warning on the internet, otherwise I might have missed it. Everything you wanted to know about the lunar eclipse earlier this morning: it was the longest lunar eclipse in over 500 years .... since 1440 AD.

Anyone for French toast? Link here to "Dad Mode."

Covid-19: apparently Austria went back into "total lockdown." That explains the sudden drop in the Dow in pre-market trading. That was the CNBC saying that, not me.

That social spending bill in the US House: will add less than $400 billion to the US debt over ten years. Couldn't Elon Musk cover this if necessary? That puts the whole think in perspective.

Inflation: wow, wow, wow. The retailers are doing very, very, very well -- if you've been following the market, you are are well aware of this. All that talk about Target and Walmart telling us they won't raise prices; Target said a couple days ago they would take the hit themselves, not raise prices for their customers. LOL. Prices are rising so fast at Target, employees cannot update the price at the shelf with what is actually charged at the register. I have several examples, but I doubt anyone cares. Okay, here are two examples. I have been buying a particular item over the past four weeks, buying one of the unnamed items about every four to five days. For the past month one of the items has been priced at $17. Two days ago, still priced at $17 at the shelf, it scanned at $18 at the checkout register. The other unnamed item has been $12, like forever, and I've bought at least a dozen over the past month or so. Last night, I picked up two more, still priced at $12 at the shelf, but each scanned $15 at the checkout counter. I bought everything as planned. Didn't bother me, nor did it surprise me. But Target is going to have an incredible quarter when they report in January, 2022.

WTI: continues to fall. This is an interesting phenomenon. Prior to the fall from $85 to $76 (WTI) the tea leaves suggested there would be a short-term glut (4Q21) to be followed by an over-supply by 2Q22 if not sooner. So, that's very, very bearish, right, huh? Nope, this is exactly what the market needs and what investors in oil need. It's counterintuitive, but Bloomberg makes the case. It's very, very interesting.

By the way, Carter Worth who reads charts for CNBC, yesterday afternoon on Fast Money, predicted WTI would drop 20% this next week. He showed dramatically how he "knew" this would happen. Wow, was that a great call or not? We're headed for a 20% fall.

US --> China: so, what's the "-->"? LNG. Link here. LNG tanker rates to Asia surged to a record high as a steady flow of US cargoes to the region boosts demand for ships.

LNG shipments from Australia to Japan have surged by more than 400% in the last two months to $316,750/day.

Active rigs: this is an estimate, +/- two to three rigs due to fact NDIC not updating the data until the end of the day, and even those updates often have errors, according to readers.

RBN Energy: how bioethylene fits into the energy transition discussion.

Discussions about energy transition and increased electrification are all around us, whether they involve accelerating the ramp-up in renewable power sources such as wind and solar, facilitating the shift to electric vehicles, or switching to alternative fuels like hydrogen. But amid all the talk about the evolution to a low-carbon world — and away from oil and gas — there’s one area that is sometimes overlooked: petrochemicals. In the U.S., most steam crackers use natural gas liquids (NGLs) as their primary feedstocks, and they also consume a lot of energy — two big red flags in an increasingly ESG-focused world. And that’s giving bioethylene, billed as a green alternative to traditional ethylene, a moment in the spotlight. In today’s RBN blog, we look at how bioethylene is produced, how it differs from ethylene produced from traditional measures, and why it may someday evolve into an attractive alternative for the petrochemical industry, even though it’s far from a sure thing.