I would mention this to my wife, that Rick Perry was approved by the committee, but I look forward to living a few more years. I am unable to think of one person my wife detests more than Rick Perry. Maybe Vladimir Putin, but it would be close.

First reported at the blog back in 2013.

Rigzone.
My hunch after XOM reported 4Q16 earnings today: XOM is in deep trouble. What could go wrong?
Why does this remind me of Chesapeake's experience in the Bakken?

Disclaimer: this is not an investment site.
Posted by Bruce Oksol at 9:45 PM No comments:

The press and US politicians cannot keep up with this.

Amazon.com:
Oh, by the way, did I say UPS was toast?
Much, much more at the link.

Sounds like another company run by cupcakes and snowflakes.

Remember the video of Donald Trump during the campaign hoofing it across divided highways to reach a rally where protesters had blocked his way?

Maybe Trump can invite the Hell's Angels to the White House. 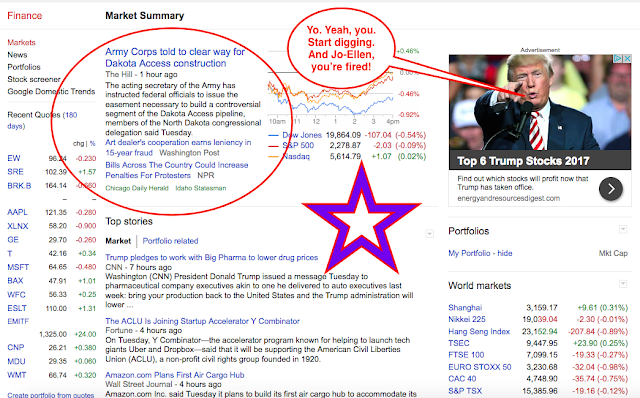 This is life during wartime. I'm waiting for Iran to test the US Navy.

The other day, in response to the "Feinstein-Obama-Trump" ban on refugees, Iran said it was banning Americans traveling to Iran.


In January, Iran's Oil Ministry published list of 29 international companies qualified to bid for oil and gas projects following the lifting of sanctions under a landmark nuclear accord that went into effect last year.

Posted by Bruce Oksol at 8:52 PM No comments:

US Army Has Directed US Army Corps Of Engineers To Issue The Easement -- January 31, 2017

PennEnergy: ND bill heightens penalties for rioting against oil pipeline. Not yet passed; proposed.
Sounds like current law adequate (5 years in prison; $10,000 fine) if enforced, but generally North Dakota snowflakes and cupcakes in judicial robes let folks off with stern warning -- "Uffda, don't do that again."

Original Post
As a reminder, with regard to DAPL, the chain of command for: the US Army Corps of Engineers

This may be of interest in 2017:
With that in mind, this link: US Army Corps of Engineers directed to approve Dakota Access easement.

The acting Secretary of the Army has directed the Army Corps of Engineers to issue the final remaining easement for the Dakota Access pipeline for a disputed crossing at Lake Oahe.

Robert Speer, who was designated as the acting Secretary of the U.S. Army on January 20, 2017, notified Congress Tuesday that the agency will be granting the easement.

The move follows a memo from President Donald Trump on Jan. 24 directing that the agency expedite reviews and approvals for the project, which was proposed to carry Bakken crude 1,172 miles across four states to Illinois, where it can more readily access refineries that handle light sweet crude.

Proponents of the pipeline have said it will take thousands of trucks off the road and represents the safest way of transporting crude, while opponents have questioned whether safety measures at Lake Oahe will be adequate to protect the water, which provides drinking water to the tribe and many others downstream.

Delegates for North Dakota have generally supported completion of the project, seen by industry leaders as critical infrastructure for the Bakken’s future.

Apparently US Secretary of the Army, Patrick J Murphy tendered his resignation January 20, 2017.

I'm having trouble reading the tea leaves, I've haven't really been following this story lately, but what little I've read, the Standing Rock Reservation elders have pretty much thrown in the towel.

One wonders how much the casino has lost over the past few months.

A reader tells me that 600 protesters are due in North Dakota court. How many show up is another issue, but for sure, those 600 are not going to be protesting.

Without those 600 the protesting cause is pretty much dead.

Unless someone finds a judge who wants to put a "stay" on the US Army directive, my hunch is "they" can complete the pipeline in less than a month.
Posted by Bruce Oksol at 8:42 PM No comments:


From Yahoo!Finance, data points:
From the linked article:


“We’re thrilled,” said CEO Tim Cook in a press release. “We sold more iPhones than ever before and set all-time revenue records for iPhone, Services, Mac and Apple Watch… and we are very excited about the products in our pipeline.”

The big number to pay attention to with Apple earnings these days, as Yahoo Finance’s Dan Howley notes, is average selling price (ASP) for iPhone. This time, ASP came in at $694.57, beating the $691 ASP of the first quarter last year, and beating Wall Street expectations of $688.

That’s an all-time high for ASP, indicating Apple devotees bought up iPhone 7 and iPhone 7 Plus, despite the controversy over Apple removing its headphone jack.

Wait until tomorrow when all those shorts start covering.

No mention of all that cash overseas.


Fitbit: to cut 10% of workforce; will miss guidance by large margin; shares down significantly in pre-market trading. AAPL earnings come out tomorrow. If I recall correctly, Fitbit had a bad quarter three months ago, also. Did I mention that AAPL earnings were coming out tomorrow. Link over at CNBC.

Over at Macrumors:
Most fun: reading the comments of those folks who simply don't get it.

Apple blows away the analysts. Prior to release:
The actual: $78.4 billion.

Later, 9:59 p.m. Central Time: Mexico raises the price of gasoline (see below); Argentina raises electricity tariffs by up to 148%. Financial Times. Trump is going to run circles around the rest of the world, making America greater than it's ever been.

Mega-Loads No Longer Allowed On State Roads In Idaho -- This Chapter Closed -- January 31, 2017

This was a big story six years ago when COP and XOM obtained permits to transport massive pieces of oil refinery equipment to the Canadian tar sands.

From the article, regarding State Highway 12:


The highway runs through the Nez Perce-Clearwater National Forest and along the Middle Fork of the Clearwater River and its tributary, the Lochsa River. Both rivers are protected under the Wild and Scenic Rivers Act of 1968.

The Nez Perce Tribe, Idaho Rivers United and the legal group Advocates for the West sued the U.S. Forest Service in 2013, saying the federal agency had a duty to regulate the giant shipments. In response, a federal judge ordered a halt to the megaloads while the lawsuit worked its way through the courts.

Meanwhile, declining oil prices reduced demand from companies seeking to use the highway for megaloads.

Justin Trudeau no doubt supports this.


The smartest person I know told me that the secret to business success does NOT necessarily involve hiring the right people. We just think it does.

The real secret to success is firing the people that you discover to be the wrong fit until eventually you END UP with the right people. No one is psychic enough to do hiring right every time. Job applicants are good at misrepresenting themselves. But a good leader knows which employees to fire and does it quickly and humanely.


Trump fires well. We saw him fire campaign managers as needed to restaff for each phase of his campaign. Lewandowski was perfect for the scrappy first months. Manafort was the right campaign manager to get Trump through the nomination process. And Conway was the right pick as his closer.

Apparently Sally Yates was not the right fit. LOL.

The Private Lives of The Impressionists, Sue Roe, c. 2006

Cuirassiers: armed cavalry; armed, shielded (breastplate, sometimes a backplate); made "famous" during the Napoleonic wars (1870); pistols displaced the lance; and eventually, swords displaced the pistols, the latter becoming secondary to the former. 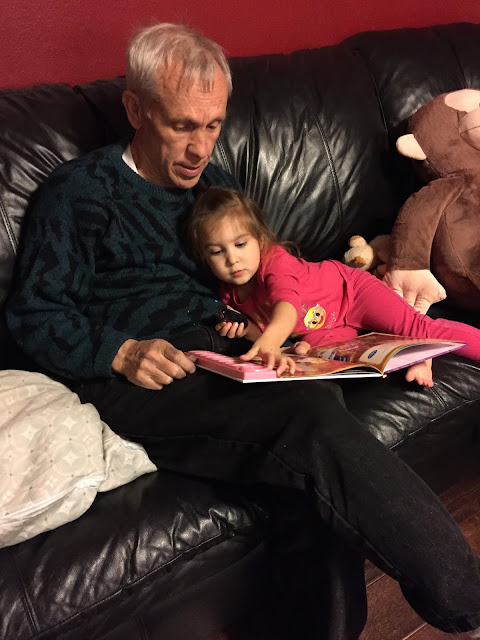 From Rigzone:
The Bakken: a Rockies basin?
Posted by Bruce Oksol at 8:20 AM No comments:

Everyone agrees that there is likely to be a shortage of workers going forward in the Bakken.

There are a number of ways to address this challenge.

Whiting is looking at a novel way of increasing the Bakken workforce: more babies.

From northdakotaoilcan, Whiting Petroleum contributed $50,000 towards a new obstetrics room int  a new medical facility at ground zero in the Bakken. Data points:
Tongue-in-cheek, of course, but this tells me that Whiting "corporate" is very, very attuned to their folks working in the Bakken: young, growing families. Good for them.

Dilbert: the Canadian option. Speaking of which, a security analyst provides rationale for Trump's action. Again, Trump is a step ahead of the politicians. He understands 9/11.

Politics: Trump is expected to "pull out" of the Paris climate agreement by the end of this week.

Politics: Dems arguing for more "open borders" into the US won't play well in the heartland. Or among New Yorkers. Maybe in Silicon Valley, but that's about it.

Politics: an LGBT-executive order today is expected today. It will be interesting to see who has accepted his invitations to attend the ceremony. Trump usually signs his executive orders in a "reality-show" venue.

XOM: huge miss; 41 cents vs forecast of 70 cents; top line also a huge miss. This helps explains XOM's "doubling down" in the Permian. I still still XOM entering the Permian was "Johnny-come-late" and too-little, too-late. I still think XOM should have bought CLR years ago.


Chrysaor was the brother of the winged horse Pegasus and son of Poseidon and the Gorgon Medusa. When Medusa was decapitated by Perseus, both Chrysaor and Pegasus were born at the same time. Little is known about Chrysaor; he was considered a stout-hearted warrior, and his name means "he who bears a golden sword".

Chrysaor is a private company established in 2007; focused on developing and commercializing oil and gas "incremental resources."

Wal-mart: expands free shipping, but has long lost the battle with Amazon Prime.
Robots: the new baristas.  Keurig on steroids. I'm not sold. Maybe at high-volume, where speed is not an option -- airport terminals.

The market: futures (Dow 30) imply a 50-point drop  when the market opens. This is still a continuation from yesterday but earnings being reported before market opening are not good.