Fiftieth Anniversary Of 1969? -- Absolutely Nothing About The Bakken

I've always said that 1969 was the best year for music. It now appears that the movie that will become the most-talked-about-movie of 2019, will be a movie set in 1969, Quentin Tarantino's Once Upon A Time In Hollywood. I don't know; we will have to wait until July, 2019.


What We Know So Far
Teaser #1
Teaser #2
The music should be great. I'm not sure if I will be able to handle:

Whether I see it in the theater or wait for the DVD is still yet to be determined.
Posted by Bruce Oksol at 8:36 PM No comments:

At the sidebar at the right, I have added this link to "Commentaries": breakeven prices -- what they mean for shale.

Oil prices are in a tug of war between the huge increase in U.S. shale production and the cartel’s attempts to slash its own output.

Recent WTI futures:
From mid-April to late-May, the price of crude oil fell pretty quickly. So much for "confidence that this rally has further to go." Unless, of course, anything above $50 is considered a rally. I don't know. But US shale will survive at $40 and thrive at $60. Can't say the same for OPEC. 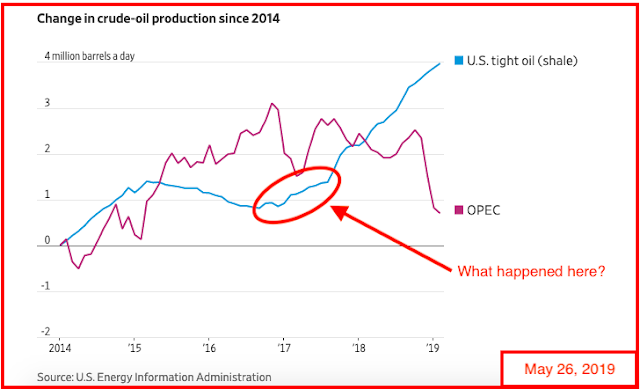 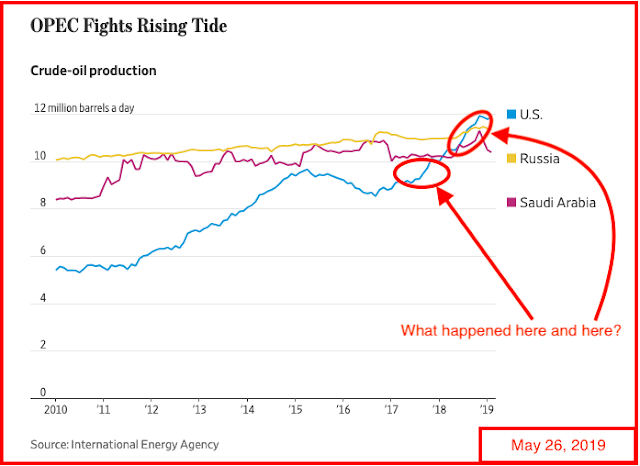 I think the big question to be answered by historians: what happened in 2016 - 2017 that propelled US crude oil production? And then again, in late 2018?

I don't agree with the premise of the article or much of what the writers opine, but I will post some data points from the article of interest:
Global inventories:
Price of oil required by selected countries to balance their budget:
For the US, according to Wood Mackenzie:
And then remember Art Berman's "It's not a revolution, it's a retirement party."

I guess folks came out of retirement. Now they're talking about a second revolution in US shale:


“The second wave of the U.S. shale revolution is coming,” said Fatih Birol, executive director of the IEA, at the launch of its Oil 2019 report in March. He added that the U.S. will account for 70% of the total increase in global production capacity over the next five years.

Earlier I said I do not agree with the thesis of the article. A reader who commented at the linked WSJ article said it very succinctly and much better than I could have said it:


So if I read the article correctly, OPEC is winning if prices remain high, and this somehow implies that US producers are losing?  I don't know about the authors, but in my business if my competitor is cutting back production and allowing me to sell my product at a higher price, I count that as a win.

Yes, as good as the WSJ is supposed to be, sometimes I wonder.

Again, I cannot stress enough the research article linked at this post.
Posted by Bruce Oksol at 8:23 PM 2 comments:

Hot in San Antonio, but elsewhere, from iceagenow: 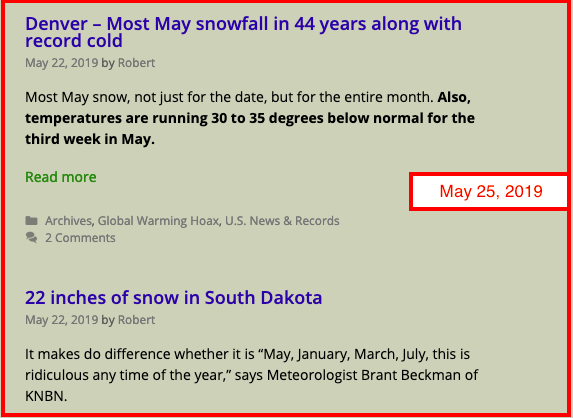 Link here, for the Kennedy klan if they are looking for a spot to ski this summer --

Polls at the sidebar.


Miami Vice
Posted by Bruce Oksol at 12:54 PM No comments:

Blogging for the next two days, Saturday and Sunday will be "disjointed." Top stories for the week will be delayed.

The granddaughters are busy, busy, busy this weekend.

Sophia is home alone with Grammy, in Grapevine, TX -- Dallas/Ft Worth area.

The middle granddaughter, is with her parents in Denver, participating in a national soccer tournament. Friday night her team had their first game for the three-day tournament. Olivia is not a striker. She plays mid-field. As a midfielder and a non-striker it is not expected that she should take shots on goal. Last night, she scored the team's first goal, relatively early in the first half. Her team won: 1 - 0.

The oldest granddaughter is with me in San Antonio for a state-wide water polo tournament.

It was a road trip from DFW (Grapevine, TX) to San Antonio.

Earlier this week it was reported that based on raw numbers, the fastest growing cities for the 12-month period ending July, 2018:
I was excited to see San Antonio again.

We did NOT take I-35 south from DFW to San Antonio. Traffic is always incredibly heavy on I-35 and this was the beginning of the 3-day weekend.

We took state highway 360 south, west on I-20, and then south on state highways 171, 67, 220, and 281. It took about six hours. Traffic was moderate; roads were great. A little slow getting through the towns along the way but no big deal.

Passing under the interchange between I-20 west and I-35 south: traffic had come to a complete stop. I assume it would take an hour or to make that half-mile transition. It confirmed my decision to avoid I-35 was the best decision. We continued west on I-20 until we got to Highway 171, south to Cleburne.

We arrived on the north side of San Antonio just before dusk. The city has expanded well north of the outer loop (Loop 1604). The amount of road construction was incredible. I've never seen so much construction, but traffic flowed very nicely. Then the eighth wonder of the world: the "1604-281 interchange." Apparently it's been under construction for ten years and it looks like another ten years of construction, not without a lot of controversy. In addition to that project, Highway 281 will be greatly expanded north of "1604." That also looks like a ten-year project.


The construction project is bigger than anything I'm seeing in DFW area now.

San Antonio, on first look, seems more interesting, more exciting than Dallas. It still has a small town feel to it, if that's even possible.
We drove into downtown San Antonio directly after check into our hotel (located at the corner of I-10 and Loop 1604.

Quick snack of tapas: mussels for me; chicken quesadillas for Arianna. The mussels were delicious; served in a completely different sauce than I was used to from France and north Texas (LOL).

Highlight of the evening: watching a state trooper pull over a Dodge Charger going about a 100 mph on the the I-10 when we were returning to our hotel. It was pitch black; the Charger passed me on my right; I saw it coming from behind and could see it coming. Crossing four lanes of traffic to the high-speed lane deftly; I was impressed. About 30 seconds down the road, the trooper's lights went on and came up on the Charger. Interestingly, the Charger immediately slowed down but did not come to a stop on the wide shoulder. The duo must have traveled about two miles at relatively slow speed until finally the Dodge pulled off an exit ramp and turned into a parking lot. I was pretty sure the speeder was going to take off again and leading the cop on a wild chase. Did not happen. But it sure took a long time for the Charger to finally come to a stop.

This morning we drove to the water polo venue. The Dub Farris Athletic Complex may not be the biggest, most impressive such complex in the world, but it must come close. The water polo tournament will be held in the outdoor pool but could be moved indoors with inclement weather (not forecast). 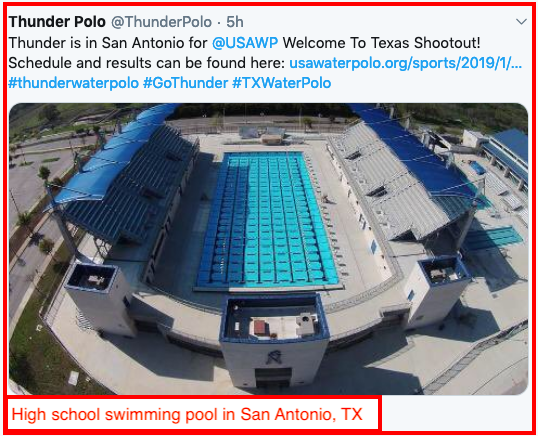 You Belong to the City, Glenn Frey
Posted by Bruce Oksol at 9:20 AM No comments:

It looks like others have also noted the impact of "inactive wells" and DUCs.

See this link for Bakken data. Data below is for the Permian. 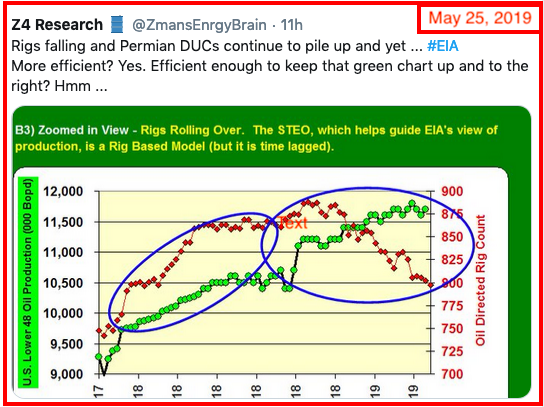 Actually, in this small graphic lots of interesting information. Most interesting, the "red queen" phenomenon -- or not!

This has to be extremely concerning for Saudi Arabia.

It is certainly yet another dagger in the coffin of "Peak Oil."
Posted by Bruce Oksol at 8:07 AM No comments:

But no one is complaining. Summer will come soon enough ... and will be very, very hot. Link here. 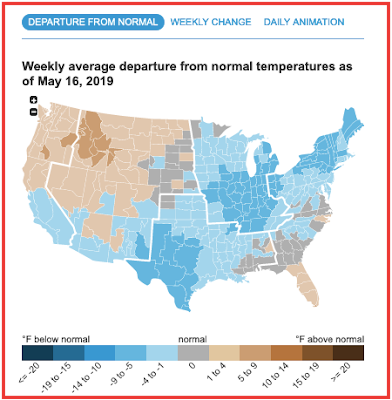 I doubt wind/solar energy pays this well once the turbines are up and running.
Posted by Bruce Oksol at 7:42 AM No comments: