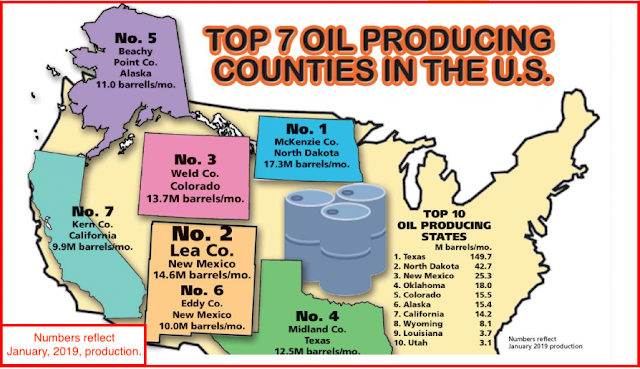 I wonder if Jane Nielson has seen this? She's the one who famously said there might be some oil in the Bakken but it won't be much.

Now, about ten years later, McKenzie County, in the heart of the Bakken, is the #1 crude oil producing county in the entire United States.

As much as I like to brag on the Bakken, the real story this time is New Mexico. This is huge for New Mexico. New Mexico is not a rich state by any stretch of the imagination. If they manage their newfound wealth well, their citizens will do very, very well.

By the way, the other three major oil producing counties in North Dakota each produce around seven (7) million bbls/month.  I could imagine of those three eventually moving into the top ten, although before it's all over, counties in New Mexico and Texas many more spots in the top 10.
Posted by Bruce Oksol at 3:31 PM