Third consecutive day the US stock market hit an all-time record high. This is nothing short of amazing ... and a huge stamp of approval for .... well, something, I suppose. Maybe the "market" likes what it sees in Portland and Los Angeles: riots, protests, and ... petitions to secede.

We are less than 155 points from hitting 19,000 on the Dow 30. Incredible. I don't think we will hit 19,000 any time soon but I think we are getting a feeling for what has been weighing down the market.
Posted by Bruce Oksol at 3:17 PM No comments:


Production of natural gas liquids in the Northeast has been rising sharply for several years now, challenging the ability of NGL producers and midstream companies to deal with it all.

Lately, though, drilling in “wet” gas parts of the Marcellus and Utica shale plays has slowed, mostly because prices for NGLs have sagged due to lower crude prices and the high cost of takeaway capacity, thereby reducing the incentive to drill for the wet gas responsible for NGL production growth.

However, it is quite possible that total NGL production growth could continue for some period of time as more ethane is extracted from wet gas instead of being “rejected”.

Meanwhile, new NGL pipeline capacity out of the Marcellus/Utica has been coming online, providing a relief valve of sorts. Today we begin a blog series on recent developments regarding Northeast NGL production, takeaway capacity and pricing.

Also, note the new poll at the sidebar at the right.
Posted by Bruce Oksol at 3:05 PM No comments:

It appears I fell asleep at the Veterans Day program; I did not. But it appears that Sophia, too, thought I had fallen asleep (or died) and she was taking my carotid pulse. 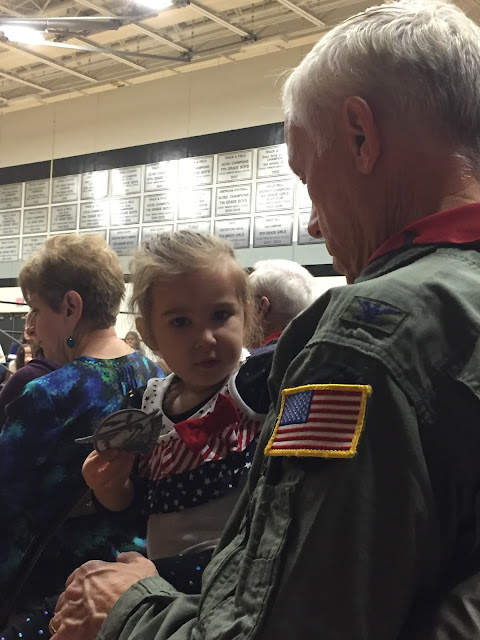 Until 9:00 p.m. November 8, 2016, I assume a lot of folks thought President Obama's legacy would last a decade, maybe more. First African-American president (not counting Bill Clinton); eponymous massive healthcare bill that everyone loves (except those who can't afford it); and, some other things.

Then between 9:00 p.m. and 3:00 a.m., Tuesday night/Wednesday morning, the duration of that legacy began to shorten.

I'm not sure his legacy will last through the end of next week based on the reaction of the stock market.

The day after the election, the election in which there were no margins so close that a recount was needed (Michigan is still counting), the stock market surged to an all-time high.

Two days later, expecting a bit of profit-taking, the stock market surged to another all-time high. And these weren't baby steps. These were two successive days of three-digit jumps.