I'll come back to this map later: 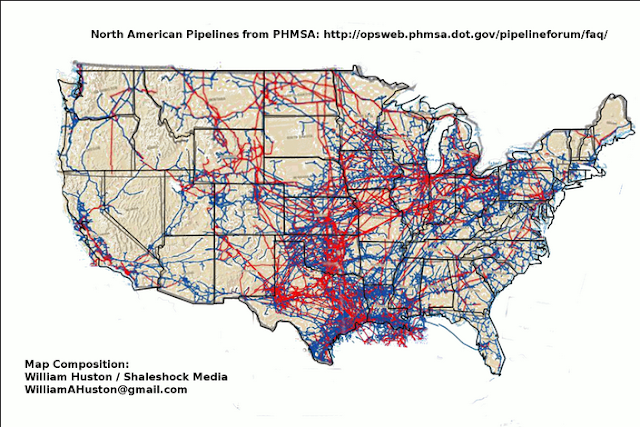 But when I come back to it, I will connect the dots:
But maybe I won't have to.

The GDPNow model forecast for real GDP growth (seasonally adjusted annual rate) in the third quarter of 2015 is 1.5 percent on September 17, unchanged from the September 15 forecast. The real GDP growth forecast declined 0.1 percentage point to 1.4 percent after incorporating updated data on retail inventories released by the U.S. Census Bureau on Tuesday. It ticked back up to 1.5 percent after this morning's housing starts release from the Census Bureau.

And that's why Janet Yellen did not raise rates.

I think this one posting by another blogger validates my posts about California.
Posted by Bruce Oksol at 10:09 PM No comments:

This well has been re-entered/re-fracked (see below). Production: 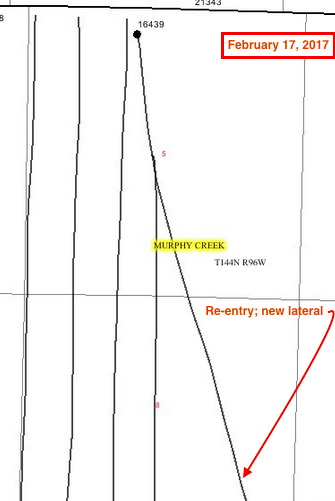 Random update on a Marathon well permitted for re-entry. Readers may remember the discussion from many years ago about MRO's plans to re-frack older wells. [July 31, 2011: list of 25 MRO wells that might be candidates for re-fracking].

Our middle granddaughter plays soccer and is a member of two teams, a "recreational" team and an "academy" team (or club team). The recreational team is "for fun" and as time goes by for those unable to get on an "academy" team becomes their only option for those who still want to play soccer. The "academy" or "club" soccer is taken very, very seriously.

Earlier this week we saw that there was going to be a conflict in scheduling between the "academy" game today and the "rec" game.  It's a long story, but the bottom line is that our granddaughter decided to play the "rec" game and not attend the "academy" game. That is a cardinal sin in Texas soccer but our granddaughter felt an allegiance to her "rec" team that superseded that sin.

Yesterday I noted that it would be possible to get to both games and I suggested we do that. Again, another long story, but our granddaughter was able to make both games. The "academy" team won 4 - 2; a very, very important game.

I was quite proud of Olivia's decision to play with the "rec" team -- something not seen as acceptable in this setting. And in the end, it all worked out.

Switching gears, if I had all the money in the world, as they say, I would settle in Provincetown, Cape Cod, MA.  But if I am reincarnated, I hope I "come back" as a farmer in Yorkshire, along the Scottish border.

About six months ago, my wife and I started watching "Foyle's War" on DVD. The series had been recommended to us by three different people, none of whom knew each other. We have all eight seasons (so far) and have watched the first four seasons. We had hoped to watch seasons 5 - 8 while in California this summer but we were too busy; we never watched those episodes.

For some reason I had two of these wells on my list of wells to follow up on. I do not recall why. Note that the first well - a simple, short lateral - is nearing the 1-million-bbl milestone.


Oil companies like ExxonMobil have long been vilified by the media, politicians and progressives for being greedy and making a lot of money, which has then frequently provoked proposals from politicians for “windfall profits taxes” on oil companies.

But many of those who complained for years about Exxon’s profits now seem to be silent about Apple?

Posted by Bruce Oksol at 7:40 PM No comments:

September 26, 2015: a contributor over at Seeking Alpha provides some "take-away" data points from EOG's UBS presentation:


Answer to question in Q & Q portion of presentation:

So first of all, the first part of the question what scenario would we envision that we wouldn't complete the DUCs. I guess if oil was $20 a barrel we might not pull the trigger and start completing those, but we just don't envision that scenario. While we laid out at the beginning the year just go back a little bit we saw, yes I would see continued growth in the U.S. shale in the early part of the year. We see that starting to decline in midyear. Certainly that's kind of playing out. We saw that it looks like U.S. production peaks in April and it has down about 300,000 barrels a day in the last recorded number which I think was a June number. So it is down about 300,000 barrels a day. We expect that to continue to fall through the year end and that's so you're starting to see the market begin to balance."

While this might seem pretty boilerplate it really isn't. Yes, EOG is telling us a bit of what we already knew - that it's not going to produce at anything less than returns it thinks are acceptable (more on this below) and that it sees those returns at substantially lower oil pricing (around "$20 a barrel"). But EOG is also telling us, importantly, that its DUC inventory is going to be the source of its 2016 production and that it sees that production coming online into a balancing market (read: higher pricing). A few things to note about this.

First, the completion process comprises roughly 2/3rd's of the cost of bringing production online - at least for EOG. That mean that with these prospects already drilled the total all-in spending to complete the process will be significantly less than it was in say full year 2014 which was a normalized spending year (pre-crisis, adjusted for scale).

Put simply, EOG is going to be able to bring on more production for cheaper than it maybe ever has on a per barrel basis. That's just factoring in the costs that will help drive 2016 production that were already paid out in 2015. That's not factoring in efficiency gains, to which EOG claims have comprised 2/3rd's of its total production savings, and/or pricing deflation from service providers and vendors. I guess to bring it all together, this is a very bullish development overall for EOG.

September 20, 2015: in the original post I said I could not recall where I read that information. Huge apology to Don -- he sent me the item but I put it in "holding" while traveling, planning to get back to it later. Here's the quote from EOG regarding new acreage acquisitions:


So, you saw our huge inventory. We have 20 years of drilling inventory. If we bought acreage today that was less quality than what we already have in our inventory we would never get to drill it. So it had no value to the company. So what we wanted to focus on then we shifted more towards, more targeted acquisitions.

EOG did not want to buy entire companies or operations because there would be too much "poor quality" acreage hidden in the entire package; instead, EOG will "target" small packages of "good quality acreage."


Original Post
This is why I love to blog. I don't remember where I read it in the last couple of days but somewhere, maybe over at Seeking Alpha, I read that EOG had not acquired any new acreage, stating that if they couldn't find acreage better than their core acreage in the Bakken (or perhaps Texas) why would they spend money on it? They have enough core acreage that needs to be drilled.

As an aside, oil exploration and production companies are valued on their reserves in addition to current operations. In other words, if they don't grow their reserves, investors tend to lower the valuation of a given company (all else being equal). One might argue that if EOG is not buying even somewhat lesser value acreage, they need to be increasing the estimates of their current holdings, and I think that's happening.

Anyway, back to the story. After noting that EOG had not acquired any new acreage recently in a long meandering note, a reader sent me this link. Argus Media is reporting:


EOG Resources is seeking to make "smaller and more tactical" acquisitions to boost its existing portfolio of oil and gas acreage on the back of the plunge in crude prices.

With the plunge in oil from last year, EOG had expected a lot of distress sales offering "unique opportunities" at the start of this year, executive vice president for exploration and production Lloyd Helms said at the UBS energy conference. "We looked at all the opportunities that were out there, but the acreages were really of less quality that what we already have."

That prompted EOG to not look at big M&As and instead focus on purchasing acreage that will help shore up its existing assets.

Given the current downturn, the independent remains focused of further lowering costs at its key shale basins. Its acreage in the Eagle Ford in Texas, the core of its Bakken/Three Forks acreage in North Dakota, the Wolfcamp, the Second Bone Spring and Leonard area, all in the Delaware basin in Texas, are currently posting more than 35pc after tax rate of return at $50/bl.

Merger and acquisition (M&A) activity in the US shale industry has remained muted despite a plunge in oil to six-and-a-half year lows as access to capital from equity markets, investments by private equity companies and sale of midstream assets have helped producers shore up their balance sheets. But that is set to change in the later part of this year and into next amid growing expectations of a prolonged weakness in the market, Deloitte said.

"The longer the price downturn lasts, and, perhaps more importantly, the longer market participants think it will last, the more pressure builds from lenders for highly leveraged operators to shore up balance sheets with asset sales," Deloitte said. "The acceptance of the reality of the lower price environment will likely lead to more deal-making through the end of 2015 and into 2016, particularly in the upstream and oilfield service sectors since they are most exposed to lower crude oil prices."


By any measure, President Obama’s effort to train a Syrian opposition army to fight the Islamic State on the ground has been an abysmal failure. The military acknowledged this week that just four or five American-trained fighters are actually fighting.

But the White House says it is not to blame. The finger, it says, should be pointed not at Mr. Obama but at those who pressed him to attempt training Syrian rebels in the first place — a group that, in addition to congressional Republicans, happened to include former Secretary of State Hillary Rodham Clinton.

$500 million to train "four or five Syrian fighters. I can't make this stuff up.  He is writing his own legacy.

Angela Merkel may regret putting out the welcome mat. The [London] Express is reporting:


Shock estimates predict up to 35 million refugees could head for Europe due to hugely unstable situations across the world. [Across the world? It's Syria. It's ISIS. It's the JV team. It's the void President Obama created.]

The huge figure was revealed today by Hungary's minister for foreign affairs and trade Peter Szijjártó.

Speaking as the country begins work on its second fence to stop migrants heading across its border he predicted the current crisis will continue for years.

Sweden and German will get the opportunity to see how costly it is to provide free medical care for everyone. And that's just the start.
Posted by Bruce Oksol at 8:39 AM No comments: