Every time I want to quit for the night I find another incredible example of "something."

So, how is this well doing?

This was the production profile going into 4/19:

It sort of got worse, if that's possible:

Now, the most recent two months:

And that's why I'm inappropriately exuberant about the Bakken. It's like a box of chocolates. I never know what I'm going to find next.

Also, take another look at that well. Who's drilling that well. Yup. Harold Hamm.

By the way, this was the production profile for this well for the first six months after it was originally drilled/completed:

And there literally thousands of these wells in the Bakken.
Posted by Bruce Oksol at 11:13 PM No comments:

Cutting The Cord; Absolutely Nothing About The Bakken -- October 3, 2019

I mentioned the other day that I "cut the cord." That's an evolving story. The problem is that my wife still enjoys a few cable networks.

I was just going to sign off for the night and watch a Perry Mason episode on Amazon Prime.com and this pops up:

I had no idea. So, here we go. An NFL game for free, streaming on Amazon Prime.com. Absolutely amazing. The annual NFL Game Pass is $99.99. I'm getting NFL with my Amazon Prime.com subscription. No additional cost. And my television remains off.

Too bad I'm not watching the NFL any more. LOL.

Okay. On to Perry Mason.

(Okay, I cheated. I checked in on the NFL game on Amazon Prime.com just to see if is was the "real thing." OMG. It is. It is the Fox Network. And the clarity -- amazing. I cannot believe it. I never knew.) And I can watch it no matter where I am. I don't need to be home. Amazing. I can watch it at Starbucks. Anywhere there is wi-fi. Which is pretty much everywhere.

This is exactly how I feel:

And now this. I mentioned I added a third telephone line through Sprint the other day. I didn't pay attention to all the "stuff" I got with that additional third line but my daughter read all the paperwork and says I got "free Hulu." I did not know that. Apparently "Hulu with commercials." Amazing. I cut the cord and I end up having more access to "stuff" than I ever had before.

Now, for real entertainment (sorry; I've posted this one many times):


Cry To Me, Rocco and Claudia
"Rocco" -- reminds me. I once met "Rocco", a Hollywood personality, while a medical student at USC, on a pediatric unit at Children's Hospital Los Angeles. Some great photos of the hospital at this link. Wow, what an incredible life. Alex Rocco? There are times I want to live forever. Rarely, I'm ready to call it a life. Check out. And then I get to pick up Sophia. LOL.
Posted by Bruce Oksol at 8:49 PM 2 comments:

Idle Rambling On The Bakken, My Second Favorite Subject -- October 3, 2019

I literally go through every well -- it will take several days. But it is really amazing. Sure, there are a lot of wells that have not done particularly well, but they are still in production. But in general, I find it amazing how many wells show a jump in production, again for any number of reasons.

The problem for the operators is not whether to drill or not, whether to re-frack or not, the problem is what to prioritize? The operators are simply limited by resources: money, people, time, etc. I'm convinced Harold Hamm thinks about this 24/7.

I don't think anyone has any idea how much work needs to be done in the Bakken, just with the wells that are already drilled. It is simply amazing.

This well's initial production in 2008 was pretty unremarkable, maybe even lousy: see the first six months of production below. If this well cost $10 million to drill / complete at the time, and at $50/bbl, this well produced 25,000 bbls x $50 = $1.25 million in the first six months. Not very good. In fact, lousy. A lot of folks would have called it "uneconomic."


If a conventional well, it was likely ready to be abandoned, at worse; or, at best, sold as a stripper well. A stripper well: 10 - 15 bbls/day.

But then look what happened in August, 2014:

The well is still producing a very, very respectable 4,000 bbls/month, and my hunch is that we will see another jump in production in the next couple of years.

Remember: Hubbert's theory applies to individual wells as well as fields and basins.

Disclaimer: I am inappropriately exuberant about the Bakken. I may see things that don't exist. I will make typographical and factual errors. If this is important to you, go to the source.

These are not hard wells to find. They simply keep popping up.

I could have used MRO's Bill Connolly 21-25H well as an example also, but I think I've discussed it a couple of times already.

But it's another great example.

Completed back in early 2008; a pretty average well for that time period:

And, yes, somewhere down the road, we'll see a second jump in production. It's just a matter of time in the Bakken.

The well:
Production period of interest:

Previously reported back in late 2017. How has this well done since then? Cumulative has more than doubled in less than two years.
Period of interest: 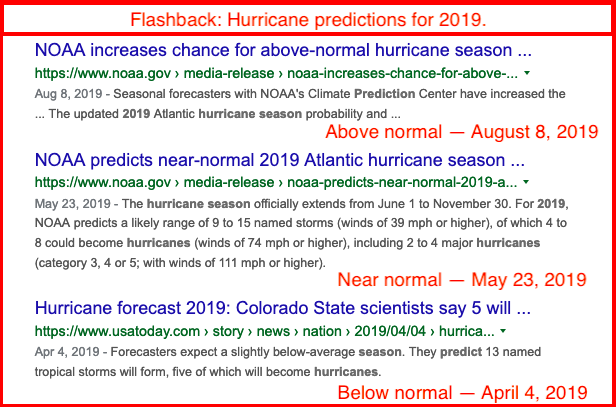 A lot of it has to do with fudging data, or as someone might suggest, whatever the definition of "is" is.
Posted by Bruce Oksol at 4:47 PM No comments:

In anticipation of Tesla earnings to reported before the end of the month, let's take a look at history. 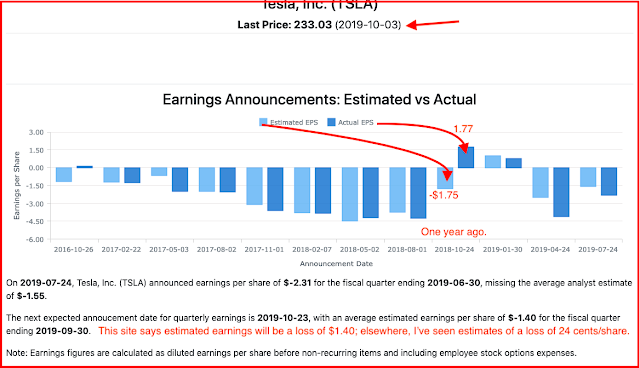 But with billions of dollars in debt coming due next year, it's not so much about quarterly gains and losses, it now becomes a matter of a) free cash flow; and, b) attitude of creditors going forward.

In the last two quarters, losses have exceeded estimates. Will it be a hat-trick this October, 2019? Or in bowling, a turkey.
Posted by Bruce Oksol at 4:34 PM No comments:

Posted by Bruce Oksol at 2:14 PM No comments:

Idle Chatter Regarding the "Halo Phenomenon" In The Bakken; "The Bakken Magic" -- October 3, 2019

October 5, 2019: as of today, I'm going to start referring to this phenomenon as "the Bakken magic." And unless someone shows me that it is happening in the Eagle Ford or the Permian, I will consider it unique to the Bakken.

This post was quickly done: not ready for prime time.


One thing to watch for (not saying it's a problem, just something to check): FracFocus is known for slow reporting of recent completions. See the discussion by EIA in the DPR. So, I worry that some of your "no refrac" comments may be about wells that did have a refrac that will show eventually. Maybe looking at several of your posts from over a year ago, where you said there was no refrac, will now show that there was a refrac.

Not saying this is a major issue. But it may affect some of the wells you look at.


You are absolutely correct. I do believe that FracFocus did not "capture" wells that were fracked before 2012 or thereabouts, and I've mentioned that on the blog. FracFocus went "live" sometime around 2012.  It's possible FracFocus will go back and "capture" these early wells. I don't know.

FracFocus also "never" makes a mistake. I put "never" in quotations because there are always exceptions. I have found one -- yes, one -- mistake over at FracFocus (amount of proppant) and I pointed that out on the blog.

Second, and this is very, very important. When I first started seeing "jumps in production," what I ended up calling the "halo effect," I tried to see if there might be some explanation. There could be many different explanations for a "jump in production," and that's why I called it a "halo" effect early on and did not get more specific.

I now feel very, very comfortable with the phenomenon, regardless of the reason for a jump in production for a specific well -- as noted, it can be for many reasons.

Because I feel very comfortable with this phenomenon, I generally no longer seek to find the answer. I no longer care. Don't take that out of context. I care, but I only have so much time to check things. Again, there are and there will be exceptions. I generally no longer check the sundry forms, or the NDIC GIS maps, or FracFocus looking to explain "this" phenomenon. I no longer care. The purpose of the blog is to get a general feeling of the Bakken, not to sort out each and every well.

I have gone back to looking at this "halo phenomenon" from the point-of-view of the small mom-and-pop mineral owner. Most small mineral owners do not care why their royalty checks increased.

In addition, from an investor's point of view, I have yet to hear even one analyst (in the earnings conference calls) ask whether this phenomenon exists. [I think there may be an exception to this also but if there was it did not amount to anything.]

So, in general, I'm back to square one, or perhaps better said, I'm switching gears again on this subject. In general, I will only note the jump in production. It will be by exception if I look for a possible reason. I no longer care if I know the exact reason for a jump in production for any given well.