Here are the numbers:

Here are some more numbers:
And, again, the article did not mention that August is the hottest month in Saudi Arabia where they convert oil to electricity to run their air conditioners.

The metrics at this post are probably better metrics to track.
Posted by Bruce Oksol at 6:34 PM 2 comments:

Not Out Of The Woods Yet -- Saudi Foreign Exchange Reserves Decline -- Saudi-US Oil Imports -- August 31, 2018

Link here. Not out of the woods yet. After turning around in April - June, 2018, Saudi's reserves fell significantly in July despite robust oil prices: 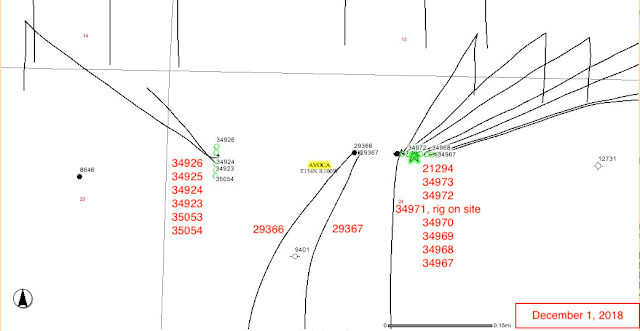 Being drilled as we speak. 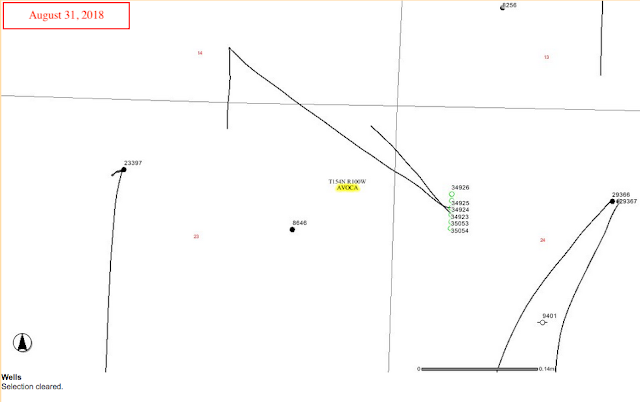 WTI has dropped slightly below $70.

Analysts' forecast for average price of Brent crude in 2019: link here.
The market (I assume this is going to be a light volume trading day -- four day weekend):
Apple: the September roll-out is going to be huge. I think it's going to be the second- or third-largest roll-out of Apple products since the original iPhone announcement. I listened to a panel of talking heads yesterday, including Gene Munster, on CNBC regarding Apple. Munster gets it; the CNBC  talking heads did not. It almost seemed most of the CNBC talking heads still used a Blackberry (see this link).


One debate centered on "form factor." Apparently Apple will come out with a "bigger" iPhone -- panelists not sure consumers would like a larger format. If Apple comes up with a multi-phone / one telesphone number solution, this would be huge. Technically Apple is there with a pocket-size iPhone and a super-size iPad but convert that iPad to an iPhone with the same telephone number as the pocket-size iPhone -- you have instant "Schwab office of the future / Cisco Telepresence."

Another debate centered on hardware. The CNBC analysts appeared not to understand the Chinese market.

The rollout, as rumored, here.

Disclaimer: there may be exceptions. I may have missed something, but "generally," it's an accurate statement. 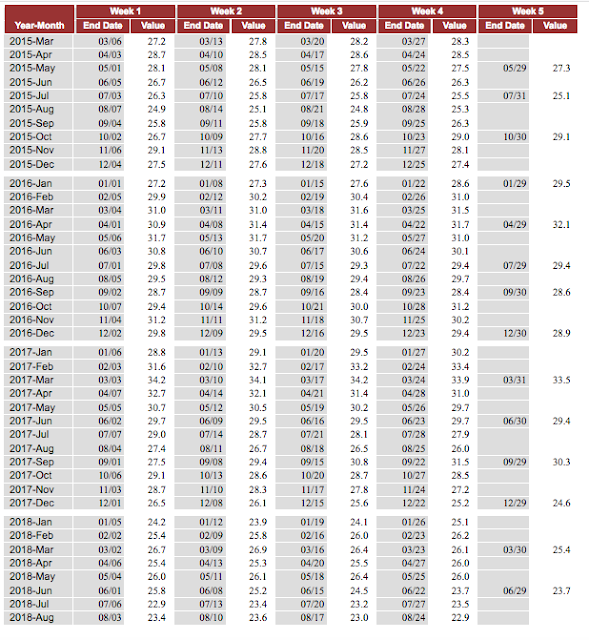 Tiger Woods will get all the press today. Television ratings will rise and fall with Tiger. At this moment in time, Tiger Woods is projected to be #31 in the field when the Tour Championship begins play -- in which only the top 30 will be golfing.

Those I follow most closely that are currently in the top 30 are:

It will be interesting to see how that changes by Monday evening.
Posted by Bruce Oksol at 9:06 AM No comments:

EU suggests ending all car tariffs with the US. I said the same thing some months ago -- exactly why are there any tariffs between any country (China, Mexico, Canada, US, EU, South Korea, et al) if we're calling it "free trade. Link at WSJ. Any US politician who says "free trade" is alive and well and doesn't need to be changed, needs to be asked if he/she knows the Canadian tariff on US dairy products. I think it's 275%. Trump says it's 375%.

Japan: appears to be giving up the fight to import Iranian oil. Even if they "skirt" US-imposed sanctions on Iran, Japan won't find bankers willing to help them. The bankers will be sanctioned by the US.

US oil: how are US oil companies doing? Very, very, very well. From RBN Energy (see link below):


Our universe of 44 E&P companies earned $10 billion more and generated nearly $7 billion in additional cash flow in the second quarter of 2018 compared with a year earlier.

All but one producer were in the black for the period; EQT Resources reported the sole loss because of write-downs related to the closing of its acquisition of Rice Energy.

The primary determinate of the improved peer group profitability was the $5.77/boe in additional revenue the peer group received ($34.29/boe vs. $28.52/boe) due to stronger oil prices.

However, a near $5/boe reduction in write-downs provided a significant uplift to second-quarter pre-tax operating income.

Lifting costs — $0.94/boe higher — were the only expense that impaired profitability: production costs were $0.50/boe higher, while oil and gas price-influenced production taxes added another $0.44/boe to lifting costs. All this resulted in pre-tax operating profits of $9.86/boe and $23.30/boe in cash flow.

As I've said before: if you read RBN Energy daily and view Vern Whitten's aerial photographs you will know everything you need to know about the Bakken. Period. Dot.

RBN Energy: US oil producers continue to chart path to long-term growth. For anyone interested in US oil, this article needs to be archived; read closely; printed out and read again. Five years from now, folks will re-read this article and will say, "could've; would've; should've."


In the first half of 2018, the U.S. E&P sector continued to reap the benefits of its dramatic evolution from decades of “boom or bust” exploration to large-scale, manufacturing-style exploitation of premier resource plays. Upstream companies halved their break-evens and reserve replacement costs through technological innovation, financial discipline, and ruthless portfolio paring, which allowed them to generate record domestic oil production in 2018 on half the capital outlays expended in 2014.

As a result, the 44 E&Ps we track reported $21 billion in pre-tax operating profits in the first half of 2018, up from $6.2 billion in the first six months of 2017, and over $50 billion in operating cash flow, up from $39 billion a year ago. Most notably, these companies are on pace to garner an astonishing $30 billion in free cash flow. Today, we discuss the ongoing effort by leading E&Ps to maintain financial discipline in a period of strong oil and gas prices.

Later, 7:00 p.m. CDT: Bloomberg -- "NAFTA crunch caps a pretty dreadful week for Justin Trudeau." Yeah, like that's an understatement. Trudeau is doing to Canada what Obama did to the US. The bad news: no term limits in Canada. From the linked article:


This has not been a good week for Justin Trudeau.

It began with a surprise U.S.-Mexico trade pact that excluded Canada from a Nafta rewrite, sending the prime minister’s negotiating team scrambling to strike a deal ahead of the Trump administration’s deadline.

Then a key pipeline he spent billions to nationalize got sideswiped by a court decision, and the most important ally in his climate change plan abandoned him. And now the White House has informed Congress of its intent to sign an new agreement with or without the northern nation.

While the 46-year-old leader has had plenty of political stumbles during his first mandate, the events of the last few days are among the heaviest blows Trudeau has taken on core economic files. They come just as his Liberal government prepares to reset its parliamentary agenda going into an election year.

“The opposition are going to try and paint this as an example of incompetence,” said Robert Bothwell, a professor of Canadian history and international relations at the Munk School of Global Affairs at the University of Toronto.

So much more at the linked article.


Canada’s precarious relationship with its vast oil riches flared up again Thursday after a federal court struck down Prime Minister Justin Trudeau’s approval of a key pipeline, reviving fears about the country’s ability to get its resources to market.

While the government pledged to press ahead with the C$4.5 billion ($3.5 billion) Trans Mountain expansion, the leader of oil-rich Alberta pulled out of Trudeau’s marquee national climate plan in protest after the ruling. Indigenous groups and the City of Vancouver had mounted the challenge, and their success highlights the extraordinary political, legal and social battles that a divided Canada has faced for years in developing the world’s third-largest crude reserves.

For Canada, the judge killing the Trans Mountain Pipeline expansion is akin to what happened to San Francisco in 1906; it is akin to a 8.0 earthquake hitting downtown Los Angeles. Pundits have not yet figured that out.

This morning's on-line edition of the WSJ did not mention the judge's ruling. I'm sure it is there, but it was not easily found. Suggesting to me that, again, pundits do not know how really, really serious this is for Canada.

The Financial Post did have a long article on the ruling.It may or may not be behind a paywall now. It wasn't overnight. I can still access it this a.m. From the article: 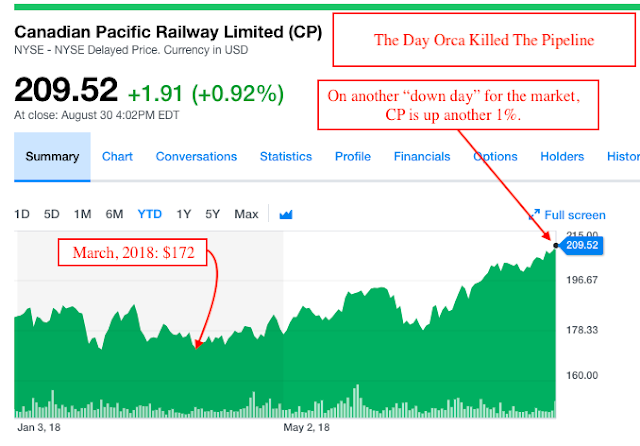