One way to raise the price of oil: shut down the Trans-Alaska Pipeline. Of course, the greatest effect will be felt on the west coast where oil / gasoline prices are already much higher that those in the rest of the US. The pipeline is closed a precaution after a 7.0 magnitude earthquake. The pipeline moves an average of 500K bopd. 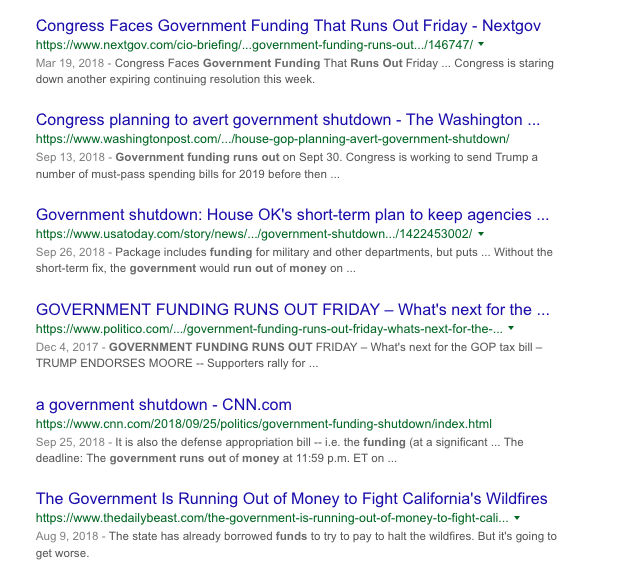 By the way, the answer: December 7, 2018, and other than Homeland Security not much else is affected. Clever how US Congress managed that.

And this is why the UN had to include this summary paragraph, the last paragraph in the IPCC Third Assessment Report, Chapter 14, Section 14.2.2.2:

“In sum, a strategy must recognize what is possible. In climate research and modelling, we should recognize that we are dealing with a coupled non-linear chaotic system, and therefore that the long-term prediction of future climate states is not possible.”

From earlier this year, a real externality, not an economic/man-made externality:

A huge "thank you" to a reader to introducing me to "externalities," a concept of which I was heretofore unfamiliar.
Posted by Bruce Oksol at 3:35 PM No comments:

Over the years, especially during the early days of the boom, "we" were told that by experts that the kind of results seen in the Talkington wells above were "not economic." Hold that thought.

The Bakken, now, is so incredibly predictable, operators know exactly what they will "get" in any given well in the Bakken before drilling. Scroll down the lists of "new wells reporting" (linked at the sidebar at the top right) and dare to suggest that I am wrong.

And, Whiting continues to drill these "non-economic" wells.

Several years ago, Whiting suggested they could "make money" on $21-oil.

One of my top shelf books: Reclaiming History: The Assassination of President John F. Kennedy, Vincent Bugliosi, c. 2007.
Posted by Bruce Oksol at 3:24 PM No comments:

Amazing graphic / link from a reader. The data is from 2014, but probably not a lot different than 2018: so, apples to apples.


AEI’s Perry writes: “Most European countries (including Germany, Sweden, Denmark and Belgium) if they joined the US, would rank among the poorest one-third of US states on a per-capita GDP basis, and the UK, France, Japan and New Zealand would all rank among America’s very poorest states, below No. 47 West Virginia, and not too far above No. 50 Mississippi. Countries like Italy, S. Korea, Spain, Portugal and Greece would each rank below Mississippi as the poorest states in the country.”

Here is the chart:

But look at this. from wiki:

Based on the Federal Reserve, North Dakota GDP per capita:
Most interesting data points on the chart above:
The most amazing thing about all of this: I doubt most NoDaks know how significant this is.

Seriously, seriously, seriously. For serious book readers with reading abilities greater than that of an eighth grader, I seriously cannot recommend Ben Orlin's Math With Bad Drawings: Illuminating The Ideas That Shape Our Reality, c. 2018.

It's a fun book to read, but doesn't break any new ground. It reads like a blog and the "bad drawings" are huge distractions.

My hunch is that this is the kind of book middle school (and probably high school math teachers, unfortunately) will recommend to their students.

I find myself going back to the book often throughout the day to read snippets -- it is entertaining but unrewarding.

The ultimate tic-tac-toe game might be worth the price of the book; some sections on probability are reasonably good; and, the author's discussion of the US electoral college is nice.

Speaking of the US electoral college: thank goodness our Founding Fathers understood the importance of protecting our population-challenged states: each state gets two US senators; and, for the most part, states are still mandating that all electors align with the state's popular vote.

These is, frustratingly enough, no index. There are end notes at the end of the book which are very, very rewarding.

There's probably more to the book than I realize -- if so, very subtle. Sublime? I don't think so.

I'm glad it was a freebie. I'll keep it around for a year and then donate it to a school.


As baseball came of age in the 1850s, a player batted until he either hit the ball into play, or swung and missed three times. With patient enough batters, the game flowed like cold molasses. Thus, in 1858 (before the US Civil War), "called strikes" were born.

If a player let a juicy pitch sail past, then it was treated as equivalent to swinging and missing.

But now the pendulum swung too far; cautious pitchers refused to throw anything hittable. The solution, introduced in 1863 (during the middle of the US Civil War), was to also call "balls": pitches deemed too far off target for the batter to hit. Enough such "balls" would grant the batter a free walk to first base.

Walks stumped [cricket fans]. Cricket's closest equivalent is a "wide," generally viewed as a mistake by the thrower. So batting average (BA) ignored walks, as if the at-bats had never occurred. Walks weren't deemed an official statistic until 1910.

Today, the most skilled and patient hitters walk 18% or 195 of the time; their reckless, swing-happy peers, just 2% or 3%. Hence ... a convoluted [mathematical] expression for what we now call "on-base percentage," or OBP. It's your rate of getting on base, via either hits or walks -- in ther words, your rate of not making an out.

Which statistic better predicts the number of runs a team will score: BA or OBP? Running the correlations for 2017, BA is pretty strong, with a coefficent of0.73. But OBP is outstanding, with a coefficient of 0.91.

Another Nice Kennedy Well Has Been Reported -- November 30, 2018 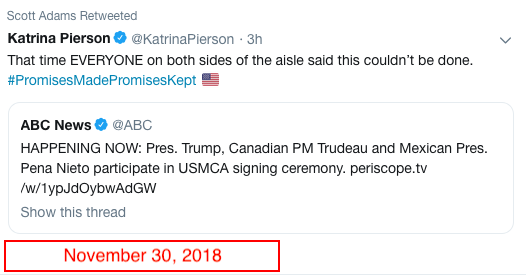 This is simply an incredible report at so many levels. And US production is greatly constrained, and reserves were based on WTI at $50 +/- a few bucks. Imagine the reserves if priced at $100.

Link here. How many nails in the Hubbert peak oil theory coffin?


Stronger oil and natural gas prices combined with continuing development of shales and low permeability formations drove producers of crude oil and natural gas in the United States to report new all-time record levels of proved reserves for both fuels in 2017.

The new record for natural gas extends a longer-term trend of development, mainly in shale plays in the Northeast. Both U.S. proved reserves of crude oil and natural gas are approximately double their levels from a decade ago.

These new proved reserves records were established in 2017 despite production of crude oil at levels not seen since 1972, and record natural gas production.

Highlights are listed below.

The Bible, Homer (Iliad and Odyssey), and Shakespeare -- one could spend a lifetime on these works (and some college professors probably have) and never exhaust the treasure trove of writing.

In the Bible the euphemisms and metaphors are incredible. Character development, based on very, very few lines, is equally incredible.

Today, going through Genesis, starting again, my third reading in the past few weeks, I come to the land of Nod -- everyone is familiar with the land of Nod. I knew it was east of Eden but never thought any more about it until today. Today, from wiki:


"Nod" (נוד) is the Hebrew root of the verb "to wander" (לנדוד). Therefore, to dwell in the land of Nod is usually taken to mean that one takes up a wandering life. Genesis 4:17 relates that after arriving in the Land of Nod, Cain's wife bore him a son, Enoch, in whose name he built the first city.

Others would ague that the "land of Nod" is a physical location.

But as a metaphor -- priceless. The land of Nod. East of Eden. The sun also rises. Seems like these could be the titles of some great books.

Two things: the metaphor, "the land of Nod," to become a nomad, and then the most amazing thing: early in the Bible, written millennia ago, the writer opens up the whole issue of civilization, moving from a nomadic life to a "city" life.

Our oldest granddaughter spend some weeks studying the transition from nomadic societies to settled societies, the virtues of each.

Enoch: son of Jared, father of Methusaleh, great-grandfather of Noah, subject of the deuterocanonical Book of Enoch.

From another source: Enoch, destroyed in the flood; re-build, new name, Uruk or New Uruk;  in time the name Uruk ceased to be a name at all and became merely a word meaning City. In later cuneiform this city was known as Ereck, and at the present time the site is known by the local people as Warka.

Uruk, just a few miles northwest of Ur, lies about halfway between Baghdad and the mouth of the Tigris/Euphrates rivers on the Persian Gulf.
Posted by Bruce Oksol at 8:55 AM No comments:


The sun was shining and wind filled the sails of the 44 major U.S. exploration and production (E&P) companies we track in the third quarter of 2018 as they collectively reported a 35% increase in pre-tax operating income over the previous quarter. It’s been an up-and-down year. Increased efficiency and rising output from the transformation to large-scale, manufacturing-style exploitation of premier resource plays moved the E&P sector solidly into the black in early 2018 after three years of losses. But profits stagnated in the second quarter on a decline in revenues as widening differentials, primarily in the Permian Basin, negated the impact of higher NYMEX prices. Today, we explain how producers overcame the headwinds to resume profit growth in the third quarter, but warn that future returns for certain E&Ps could be jeopardized by the sudden plunge in oil prices.

Posted by Bruce Oksol at 6:54 AM No comments: