The Incredible MRO "Monson" Pad In The Antelope-Sanish Field -- November 9, 2021

See "the Monson pad" for the graphics and names of these wells. Link here. I brought them forward just to note how incredibly productive these wells are.

Contrary to expectations, it looks like the daughter wells are going to be a whole lot better than the parent well.

Fed: it's a win-win for investors. Either Jay Powell will be re-appointed or Lael Brainard will be appointed. The former has done a superb job and investors "know" and "trust" him. Lael? She's even more dovish.

The name Lael occurs only once in the Bible. Lael was the father of Eliasaph, the leader of the Gershonite Levites at the time of the first census of Israel (Numbers 3:24). Nothing further is known about this man. 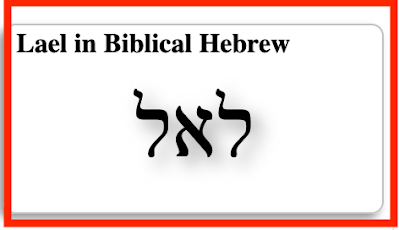 The second syllable should be known by all. This is the prominent Canaanite deity whose name became applied to the God of Israel, or the common abbreviation of Elohim, the genus God. Another example, "Bethel: beth-el --> home of God.

Brandon is monitoring the situation: Line 5. Link to Charles Kennedy.

Oil jump today: caught me by surprise. The good news: Brandon and his team in the White House are monitoring the situation.

One and done. When Brandon announces an SPR release it will be a waffling amount -- afraid to "go big." At most, WTI drops from $84 to $80. That will be the last arrow in that quiver, the SPR release. If OPEC diverts an equal amount of oil to India, Asia or cuts production or unable to meet quotas, oil reverses and there is no Plan B. Keystone XL, "miss me now?"

SRE; 3Q21 earnings call is available. Earlier, it had been reported that SRE met estimates.

Ten year treasury continues to drop: at midday, yield down to 1.417%.

WTI: still in backwardation -- but both December and January are trending higher.

Continental intends to use the net proceeds from the offering to fund a portion of the purchase price in the recently announced acquisition from Pioneer Natural Resources Company, the "Pioneer Acquisition," to pay the fees and expenses associated with the offering and, if the Pioneer Acquisition is not consummated, for general corporate purposes, which may include repayment of certain indebtedness.

If anyone can find the proposed yield on these notes, please let readers know. Ten year treasury rate currently running about 1.4%. Let's assume a 200% premium with CLR's senior notes yielding 4.2%.

Yesterday, my favorite store for clothes shopping with Sophia, Old Navy, just a five-minute walk from our apartment complex, had an 18-hour 50% off sale. Sophia did not want to go, so we missed it, but my hunch is this is just the beginning.

I don't want / need another plastic card in my billfold but BNPL is getting very, very attractive. Instead of paying off the bicycle I bought yesterday in one month to avoid finance charges, I would love to pay for it in four equal installments over two months.

SPR: releasing oil from the SPR is a one-trick pony, a one-shot deal -- sure, "they" can make multiple releases, but the announcement, if it comes, will be a one-off. Regardless of all the pros / cons / legality, the administration knows that once the announcement is made, the arrow has left the bow, and there are no more similar arrows in the quiver.

Word for the day: quiver --

Middle English: from Old English cwifer ‘nimble, quick’. The initial qu- is probably symbolic of quick movement (as in quaver and quick ).

Amazon sends me a carton of K-cups on a regular basis. I originally subscribed when the price was about $23 / 100-count, or 23 cents a cup.

Prior to shipping each order, Amazon notifies me of the upcoming delivery and offers me an opportunity to change the order: cancel it altogether; change the delivery date; change the amount; etc.

Today this note from Amazon. 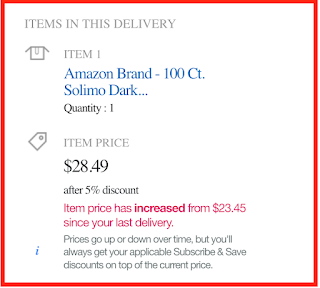 Meanwhile, at "my" Starbucks down the street which I haven't visited since March, 2020. At that time I was going to Starbucks daily and sometimes twice / day: 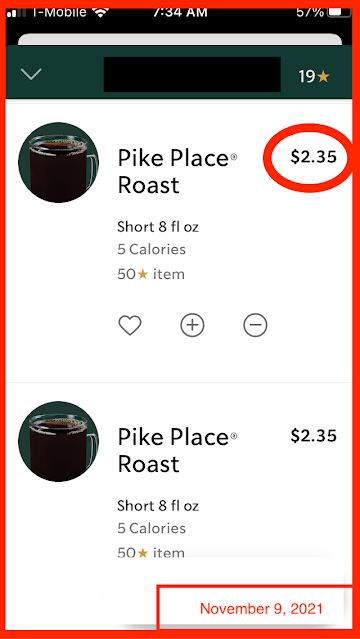 This Is What Happens WIth ESG -- Equinor's Virtual Signaling -- November 9, 2021

SPR: Biden administration telegraphs it will release oil from the SPR.

Admittedly, the idea of capturing carbon dioxide, cooling and compressing it into a weird, neither-liquid-nor-gas state, and pumping it deep underground for permanent storage would have baffled the crude oil wildcatters and pipeline builders that created the modern energy industry back in the 1940s and ’50s. They’d surely say, “You’re proposin’ to do what?!” But times have changed. The oil and gas business is entering an extraordinary era of transition, and producers, midstreamers, and refineries alike need to keep abreast of what’s happening regarding carbon capture and sequestration (CCS), how it will affect them, and — ideally — figure out ways to profit from it. That’s the impetus behind today’s RBN blog, in which we begin a deep dive into efforts to reduce emissions of man-made CO2 by capturing it from industrial sources and piping it to specially designed wells for permanent storage.

Sequestration isn’t just for juries deciding a high-profile case. It’s the permanent storage of CO2 in the ground — way down in subsurface geologic formations — with the aim of keeping that important greenhouse gas (GHG) permanently out of the atmosphere and slowing the pace of climate change. CO2 sequestration has become a hot topic in the energy space the past few years, and it would be fair to say that, with ESG issues and the COP26 meeting in Glasgow enjoying such high-profile attention, sequestration is going to be front of mind for producers, midstreamers, and refiners as far out as they go with their planning cycles.

Disclaimer: in a long note like this, there will be content and typographical errors. This is not an investment site. This page is for my own benefit to try to better understand the market. I would prefer this not be read by others, but if one reads it, don't quote me on it. Facts, factoids, opinions and observations are interspersed through the post, and it is difficult to separate fact from fiction. If this information is important to you, go to the source.

The semiconductor (chip) story, yesterday, Monday, was incredible. That was the most interesting sector Monday.

Nvidia is a story in itself. I don't have a dog in that fight, so, I will ignore it.

The story that I am most interested in is the acquisition of XLNX by AMD.

That deal was supposed to close by the end of the year (2021); it's been going through the regulatory process for more than a year, and it's been approved by all regulators but one: the Chinese. The Chinese may yet scuttle the deal.

XLNX paid a nice dividend prior to the acquisition announcement a year ago. XLNX quit paying a dividend at least a year ago.

Interestingly enough, apparently there was language in the proposed deal that allowed XLNX to re-instate the dividend if the deal did not close by November 8, 2021. That would cost XLNX $100 million; if the acquisition is approved by the Chinese after November 8, 2021, the acquirer, AMD, will lose $100 million simply due to "timing."

For more on this discussion, see the SeekingAlpha article here. That article was posted October 29, 2021, and the writer said it was probable, but not guaranteed that the Chinese would approve the deal by November 8, 2021, and prevent the dividend from being paid.

This is simply amazing, We get to follow this story in real time, and it's getting very, very interesting.

First of all, there was a major event by AMD yesterday (an accelerated data center and EPYC)  and it was widely felt that XLNX would be there if the merger was on track. XLNX was not in attendance. That was a minor story compared to everything else but it may suggest that things are not going well with the Chinese.

In this case, it's all about "merger arbitrage."

If the deal goes through, each XLNX shareholder will get 1.7234 shares of AMD.

The SeekingAlpha article alludes to the merger arbitrage article, one individual suggesting if the deal was going to go through, the spread between AMD and XLNX would not be as wide as it is. The writer of the article suggested that the reason for the wide spread was simply because those engaged in arbitrage by buying XLNX were simply not able to keep up with how fast AMD was surging.

XLNX was up only 4.79% at the close, up $9.50; closing at $208, which suggests the writer of the article might have been correct. Or not. Maybe some folks are getting cold feet. If the deal does not go through, XLNX will fall back to its "fair value" of $150.

A merger arbitrageur could have bought XLNX for $210 yesterday and, if the deal goes through, immediately flip / sell AMD and make a tidy 24% profit.

I'll be watching for the exchange or the SEC to stop XLNX trading some time this week.

But XLNX went ex-dividend on November 5, 2021, and the 37 cents / share will be paid on November 15, 2021. Had something happened today, "they" might have been able to stop the dividend, but I think it's too late to stop that now.

In the process of trying to sort out the AMD - XLNX deal this evening, I stumbled across something that was just as interesting.

Years and years ago, Apple, Inc., was a hardware / software company. Then somewhere along the line it morphed into a fashion company but, shortly after that, morphed into a mobile entertainment company. Now, Apple is a semiconductor company. See this post. Lots of hyperbole, of course, but some might get the point.

I clearly stated Apple was now a semiconductor company.

At Google Finance, looking for any story that might shed light on the AMD - XLNX deal, I checked out XLNX, and lo and behold, look what I found.

At Google Finance, the company in question is "compared" to other companies in the same sector.

At XLNX, Google Finance said to compare the latter with:

I can't make this stuff up. Whoo-hoo! 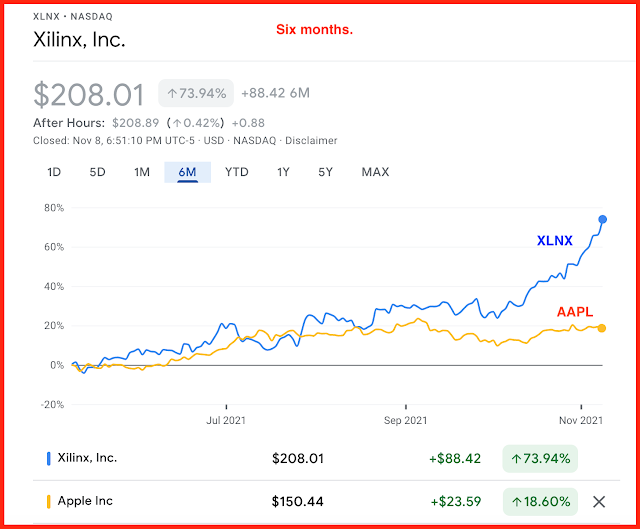 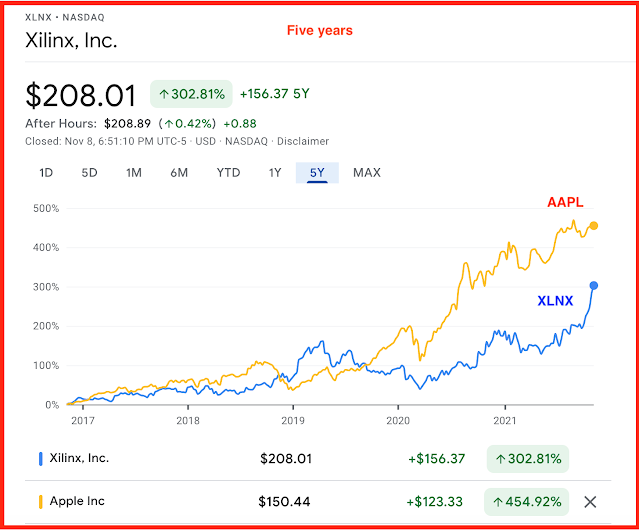 Posted by Bruce Oksol at 1:45 AM No comments: