Lease Sales -- Apparently No ND Quarterly Lease Sale In May, 2020

Link here.
Posted by Bruce Oksol at 9:45 PM No comments: 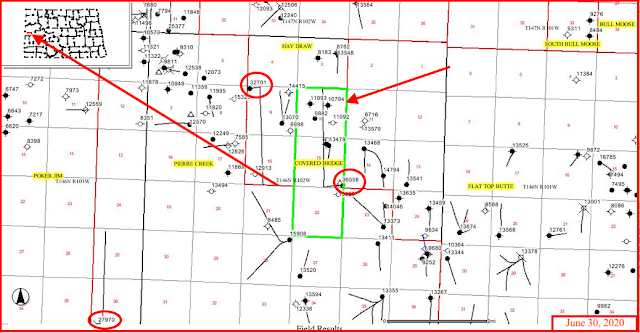 From the file report:
At the sidebar at the right, click on "heat map of the Bakken":
area 8: west McKenzie; does not appear to be Tier 1; maybe not even Tier 2.

This "Covered Wagon" well took awhile to drill but not out of the ordinary
Two other wells in immediate area of interest:
My two cents worth: there's a lot of work left to be done in the Bakken; at the right price, this area could be Tier 1, and with improved completion strategies, more experience, and even at these prices, this area might be a pretty good area -- which, if accurate -- speaks volumes about the Bakken.
Posted by Bruce Oksol at 9:31 PM No comments:

Updating Some 1Q20 Wells That Came Off Confidential List But Reported No Production At The Time, Part 2 -- June 28, 2029

These are wells that were released from the confidential list during the 1Q20 but did not report production or an IP at the time they came off the confidential list. Tonight --the second consecutive night that I am doing this -- I'm running through the list and will post those that have not previously been posted. [Note: I have only gotten through a small part of the list; I may or may not complete this exercise later.]

These wells are simply incredible.

COP: for bedtime reading, later tonight -- a contributor over at SeekingAlpha writes about COP.

WLL: a contributor at SeekingAlpha.

Oil: had a good day for bulls --
Harold Hamm: with his most recent purchase, Harold Hamm now owns almost 80% of the total common CLR shares outstanding as of April 30, 2020

The wall: US Supreme Court declines to hear border wall challenge. Story and links should be everywhere.


The Supreme Court is leaving in place a decision that rejected environmental groups’ challenge to sections of wall the Trump administration is building along the U.S. border with Mexico.

The high court on Monday declined to hear an appeal involving construction of 145 miles (233 kilometers) of steel-bollard walls along the border in Arizona, California, New Mexico and Texas.

The Center for Biological Diversity, the Animal Legal Defense Fund, Defenders of Wildlife, and the Southwest Environmental Center had challenged a federal law that allows the secretary of Homeland Security to waive any laws necessary to allow the quick construction of border fencing. The groups had argued that violates the Constitution’s separation of powers. But a lower court dismissed the case.

Boeing: gets FAA okay to start certification test flights of its 737 Max jet. Wow. So, let's see. Maybe by the end of the year we start seeing them fly again?

Facebook pummeled -- ZeroHedge: Facebook shares down 16.3% from last week's high; boycott widens. Coca-Cola halts social media advertising; the list grows. The market is surging today and FB is down about a percent. From IBD:


Facebook dipped 0.8% Monday, after plunging 8% Friday as Unilever joined a growing number of companies that say they will stop advertising on Facebook and Instagram as the "Stop Hate for Profit" boycott picks up steam. Over the weekend PepsiCo reportedly followed suit.

The Verge had a story on Decadron and Covid-19 back in March, 2020. The first textbook on Cytokine Storm Syndrome was published last November, 2019, before Covid-19 was even a glimmer in the eye of Wuhan biowarfare researchers.

With regard to Covid-19, the press is making a big deal out of something that's been known by physicians since at least the 1990s.

It makes sense that in certain patients a steroid would work, in this case dexamethasone, or Decadron, wiki entry.

When I was first introduced to Decadron, in the late 1970s / early 1980s I thought it was a miracle drug, just as penicillin was considered a miracle drug back in the day.

Decadron was first made in 1957 by Philip Showalter Hench, of Mayo Clinic fame, and was approved for medical use in 1961. Hench was one of three physician-researchers to be awarded the Nobel Prize for Physiology or Medicine in 1950 for the discovery of the hormone cortisone, and its application for the treatment of rheumatoid arthritis.

The bottom line for me: technology is speeding the spread of information for everyone, including physicians, and physicians practicing medicine, still an art, will tailor their treatment for each of their patients. But this is really, really cool -- physicians have another tool in their toolkit to fight corona virus.

By the way, learning that Dr Hench was from Mayo, as was one of the other two physicians awarded the 1950 Nobel Prize for Medicine, connected several dots for me. It's a long story and I won't go into now, and probably never will, but, again, the blog "forced" me to do a little "research" and in the process, I closed a few loops, connected a few dots.
Posted by Bruce Oksol at 9:41 AM No comments:

Words and phrases one does not like to see in one story when it comes to electricity, unless it's in French:
Link here to ArgusMedia.

Amazing how many contracts exist:

Derivative contracts are used in European power exchanges. The value of a derivative will vary based on the changes in the price of the underlying power product. Companies that consume and produce energy use energy derivatives to help hedge against marketplace risks.


Supply concerns have been stoked by extended nuclear maintenance scheduled for the fourth quarter. In mid-April, France’s EdF reduced its 2020 nuclear output guidance to 300TWh to reflect the Covid-19 crisis and resulting drop in power demand. It then changed its nuclear maintenance schedule in late April — this shows that 19.4GW is expected to be off line in October-December.

But historical data show that during winter 2016-17, when nuclear unavailability averaged over 20GW, day-ahead hourly prices peaked at €874/MWh for delivery on hour 19 on 7 November 2016.

Meanwhile in New England this morning: 90% of electricity provided by natural gas and nuclear; only seven percent by renewables. Cheap energy right now.


Chesapeake Energy’s announcement yesterday that it has filed for Chapter 11 bankruptcy protection is only the latest sign of how much the seismic economic shocks from the pandemic-triggered demand destruction have roiled the U.S. E&P sector.

With equity prices plummeting to historic lows, oil and gas producers have focused their efforts on shoring up their balance sheets and share prices, by tightening their belts going into 2020, reducing capital expenditures by an average 14% in order to boost free cash flow and increase shareholder returns. So, it’s no surprise that the industry has aggressively battened down the hatches operationally and financially, mothballing rigs, suspending completions, shutting-in producing wells, slashing dividends, and suspending share repurchase programs.

First-quarter 2020 earnings releases and investor calls provided a clear picture of the dimensions of the cost-cutting by the 41 U.S. E&Ps we track. But continued uncertainty about the course and duration of the COVID-19 pandemic, the pace of economic recovery, and the outlook for commodity prices have triggered reluctance on the part of oil and gas executives to issue production guidance for the remainder of 2020 and beyond. Today, we review the current capital expenditure reductions by U.S. E&Ps and piece together clues on their impact on oil and gas production.

It was a surprise when Apple, Inc., opened retail stores many, many years ago.

It was my experience that on any given day, Apple retail stores inside malls were always "packed," whereas, Microsoft stores were embarrassingly empty. It was not uncommon to see more Microsoft employees in their retail stores than customers.

This past week it was reported that Microsoft will permanently close all its retail stores. Four stores will be converted into "experience centers" where no products will be sold, locations in NYC, London, Sydney (Australia), and Redmond (Washington state).

With the closure of its retail stores, there appears to be no reason to continue marketing its Surface devices, and, indeed, there are now analysts who expect Microsoft to eventually scuttle the Surface.

After a huge sell-off on Friday due to an announcement that Apple, Inc., will be temporarily re-closing some stores due to a surge in Covid-19 cases, AAPL futures are up very, very slightly, overnight, early Monday morning.

How surprising is this announcement by Microsoft?

Glad you asked. Actually, the bigger question is, "Why did it take so long?"

Covid-19 was the last nail in the coffin, of course, but it (closure) was bound to happen sooner or later. Having said that, it was a huge surprise. Why? The London Microsoft store had just opened about one year ago. Link at The Verge.


The big decision partially explains why Microsoft had yet to reopen a single store after they were all closed in light of the pandemic.

Last week, Microsoft told The Verge that its “approach for re-opening Microsoft Store locations is measured and cautious, guided by monitoring global data, listening to public health and safety experts, and tracking local government restrictions.” At the time, the company declined to offer an update on when any stores might open again.