Hess is drilling five new BL-Amelia wells; the horizontals will run west to east. There is a producing BL-Amelia well running from east to west. The wells:


Now that Gallup has quit the field, Rasmussen Reports is the only nationally recognized public opinion firm that still tracks President Trump's job approval ratings on a daily basis. 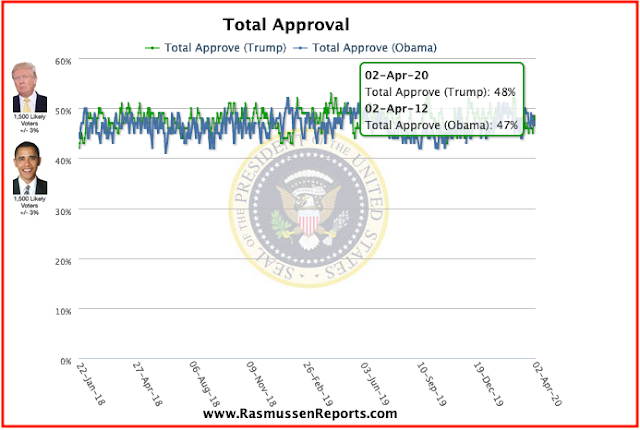 The problem with these polls: it depends 100% on how good the "rolodex" is -- how good the sampling is.
Posted by Bruce Oksol at 9:18 PM No comments:

Anyone who lives in California, knows this story only too well.

For those who have never heard of California's Proposition 65, consider yourself very, very fortunate.

California's Proposition 65 has its own wiki page. LOL. Wow, I never knew it went all the way back to 1986. I remember the first time I ever walked into a store with a "Prop 65 warning" on the door. I was almost afraid to walk in -- until I got the "inside joke."

The other day I ordered a whetstone. It arrived today -- probably from China, LOL -- and nope, no warning about coronavirus -- but wow, I was warned about cancer-causing substances. 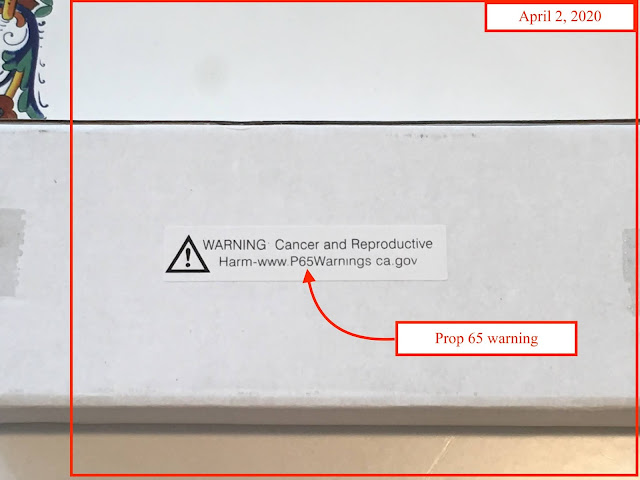 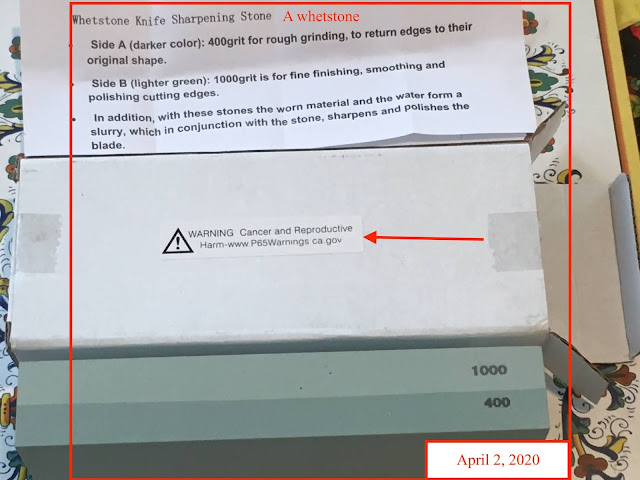 But wow, my knives are sure sharp.
Posted by Bruce Oksol at 6:48 PM No comments:


Compared with Saudi Arabia, which requires a break-even oil price of more than $80 per barrel, Russia’s is around half that and energy minister Alexander Novak has further claimed with some bravado that Russian oil production is competitive at any price. This explains why, so far, Russian authorities have been reluctant to come to some sort of arrangement with Opec to limit production, despite Trump’s hopes for a deal buoying the market in recent days. It means the oil price shock effect will be much less pronounced for Russia than most other oil exporters. Indeed, preliminary data from Euromoney’s first quarter survey – to be officially released next week – shows risk scores worsening for oil-producing countries as diverse as Egypt, India, Indonesia, Malaysia and Norway.

Worst affected are Iran and Iraq, given their myriad other heightened economic and political risks. In those two countries, the fiscal shocks are likely to be most severe and less easily absorbed. By contrast, Russia has built up substantial foreign-exchange reserves, it has a flexible exchange rate and an extremely strong and resilient fiscal position, with room to support the economy using fiscal and monetary stimuli – and its overall country risk score has shown resilience as a result. Finance minister Anton Siluanov refuses to fret, pointing out that Russia has a sovereign wealth fund topped up with last year’s budget surplus worth $157 billion (11% of GDP). This can be used to cover the budget gap in any crisis for a period of four years, with $580 billion-worth of foreign-exchange reserves available to cover a decade of low oil prices. 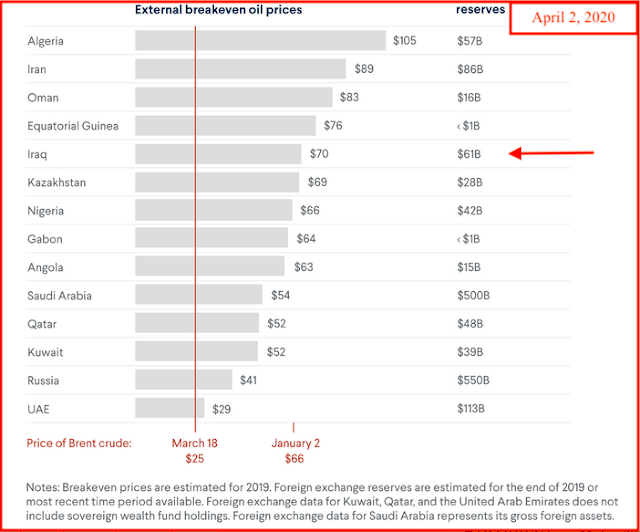 Metrics: in addition to all the metrics we're already watching, these are the two key metrics I'm following for progress with regard to these two issues:
Committees, US House Un-American Committee rises once again --


Breitbart is posting that the US House and Nancy Pelosi have formed a new committee -- things we need to do to keep America's mind off Joe Biden. The committee's chairwoman has a different name for that committee but that's the purpose of the committee. Check out Breitbart to learn more. Google-owned "blogger.app" will not allow links to Breitbart.

Walgreens: a huge shoutout to the customer service folks at Walgreens.com.


There was a "systemic" problem with their photo.com website. I was on chat.online for a bit of time yesterday; once we jointly worked out the problem and the solution, I was told chat.online did not have the "authority" to do what was needed. I needed to telephone customer service.

The menu was very short; the recording said "hold times" were longer than usual. In fact, I was connected with a real human within two minutes. The customer service person was unaware of this problem, and I led her through the steps that needed to be taken, and voila, she was willing to work with me. Problem solved. I was very, very impressed. Huge shoutout to Walgreens. Is is Walgreen, Walgreens, Walgreen's or something else? Google maps calls it Walgreens, so that's what I will do -- assuming I remember.

TCM: wow, I thought I was the only watching TCM. LOL -- see this note over at PowerLine today. I did not care for TCM's line-up last night so I watched the Coen Bros No Country For Old Men. A superb movie that ages very well.

Slow cooking: I got such a kick out of the pulled pork recipe a reader sent me that when a neighbor suggested "Mississippi Roast," I immediately looked up the recipe. It's cooking now and smells delicious.

Texas schools, K-12: it's not official or announced yet, but the tea leaves suggest the Texas governor will close all public K-12 schools for the remainder of the year. Most feel that the majority of "kids" will learn more at home at this point anyway. Going back to school now would entail all kinds of restrictions, inefficiencies. etc.

April Fool's joke: the best April Fool's joke that had many families in our area absolutely discombobulated -- trying to figure how this was going to play out. One of our dearest friends either photo-shopped it herself or found the photo-shopped graphic and sent it to every e-mail address she had, including "public" social media sites, such as nextdoor.com. The background was of Fox News, with this crawler: "Texas governor will have have all K-12 students repeat the entire 2019 - 2020 school year." From the reaction I heard nearby, it sounds as if most folks fell for this practical joke.
Posted by Bruce Oksol at 4:38 PM 2 comments:


At the end of the meeting, Trump will be able to tell "us" how much the oil companies plan to cut production. The decision by the individual oil companies will be a business decision; it won't be mandated by anyone. But US production will decline. Forget about the whys and wherefores -- it doesn't matter. Not for this part of the discussion. Collectively, the US might actually cut production by one to two million bbls of oil. That will be enough for Saudi to "save face" and at least say, "okay, let's think about that," and wait to see Russia's response. I'm not optimistic/pessimistic one way or the other on this; I just think it's fascinating to watch a president whose background is business / making deals and watching the process.

There is only one other well in this drilling unit:

Disclaimer: in a long note like this there will be content and typographical errors. If this is important to you, go to the source.

That have been several posts regarding this well. Links here: pending.
The well came off confidential list today:

Four wells on this pad:
Total wells with some percent in this section: not less than twelve (?), so far, and still plenty of drilling locations remain.

Fracking: let's check FracFocus vs actual frack data supplied by NDIC/EOG:
Neighboring wells:
Wow, I wish I could post another data point about this well but I can't confirm it, it's beyond my understanding of what goes on in the oil patch, and it's a trivial data point anyway.

Alberta -- the province -- just stepped up to the plate! Backs Keystone XL. Puts money where it's mouth is -- link here -- Alberta, Canada:

Later, 8:36 a.m. CT: huge correction made below; a reader caught the error. Thank you. When I die (perhaps of coronavirus) and this blog is shut down (or taken over by Sophia), the ending credits to the success of this blog will have to include a handful of readers, for catching my errors. LOL.


But look at that. I did not know. Fox News -- almost twenty years as the most-watched cable news network in total-day and primetime.

And with the recent surge, it's hard to believe Fox News dominance will change any time soon. I've always wondered why the mainstream media is so vocal and so negative about Fox News. It now makes sense.

It also explains why President Trump generally goes there first to reach out to the American public. It's all about viewership.

Jobs: link here -
Canadian dollar: dropped overnight to 68 cents US but since then recovered a bit.


RBN Energy: why US LPG exporters are losing their edge in Asia.


If Saudi Arabia and Russia flood the world with their crude oil in the midst of a global demand crisis, it would have impacts and implications far beyond crude. A ramp-up in Saudi and Russian oil production this spring would also increase their output of associated gas and NGLs. At the same time, the opposite will be happening in the Permian and other liquids-rich U.S. shale plays, where producers, stunned by sub-$25/bbl oil prices, already are pulling back on drilling and later this year will see their oil and NGL production gradually level off and eventually decline. All this is already turning the international LPG market on its head — just last week, U.S. propane exports plummeted by nearly 40% versus the prior week, to only 889 Mb/d. Today, we consider recent extraordinary market developments and their effect on the arb between Mont Belvieu and Far East LPG prices.

Link here.
Posted by Bruce Oksol at 7:22 AM No comments: