"You say tomâto, I say tomāto: JPMorgan Chase --purely coincidental. The other day I was talking about the difference between and economic recession and an economic depression. The former (recession) has a pretty good definition; the latter (depression), no one agrees on except in very, very general terms.

It is simply said that a depression lasts years and has an unemployment rate of 20%.

That's what I posted based on a financial site that discussed the difference between recessions and depressions. Current first time claims for unemployment insurance are about 300,000.

I thought I was getting ahead of my headlights -- talking about depression -- no one else had mentioned it, and I still haven't see it in mainstream press .... until today.
From Power Line today:

The point is, even if 80 percent of the pre-crisis economy comes back by mid-summer, you’re still looking at a major recession, if not a near depression. Mauldin, by the way, has been predicting for the last couple years that a recession would see the federal budget deficit soar to $2 trillion. Now that would be regarded as “the good old days.” This year’s federal budget deficit is more likely to be over $4 trillion. And that may be optimistic.

****************************
Twilight Zone
OPEC+ deal. I would never have guessed it but apparently Mexico really is holding the better cards. The OPEC+ agreement remains on hold -- Mexico refuses to "give in." Who would have ever guessed? Bloomberg has the story. Archived.

As Mexico and Saudi Arabia fight over a deal to bring the oil-price war to an end, Mexico has a powerful defense: a massive Wall Street hedge shielding it from low prices.

With talks well into their third day, the Mexican sovereign oil hedge, which insures the Latin American country against low prices and is considered a state secret, is a factor that may make the country less inclined to accept the OPEC+ agreement.

Folks are eagerly waiting for the April / May / June atmospheric CO2 levels. Regardless of they "come in," it will speak volumes about human contribution to atmospheric CO2. 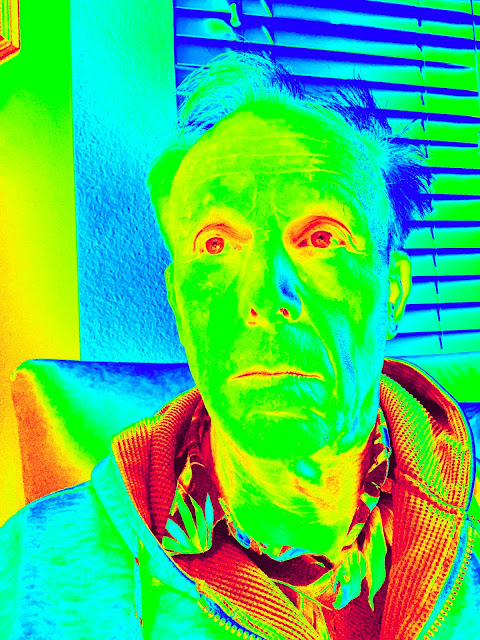 Note jump in production of this well:

Maybe I'll complete this post someday ... but probably not.

Most of these wells have been off line for the past two months. These wells are tracked here:
So, what's going on? 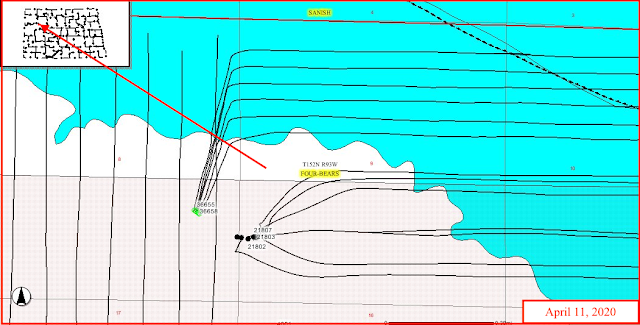 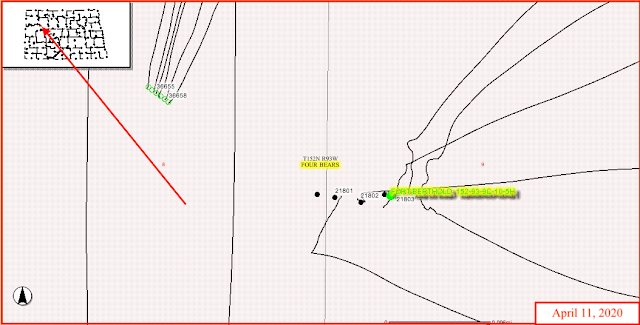 Posted by Bruce Oksol at 1:05 PM No comments:

The dotted line on the chart below indicates the current trend of beds needed for COVID-19 in New York. 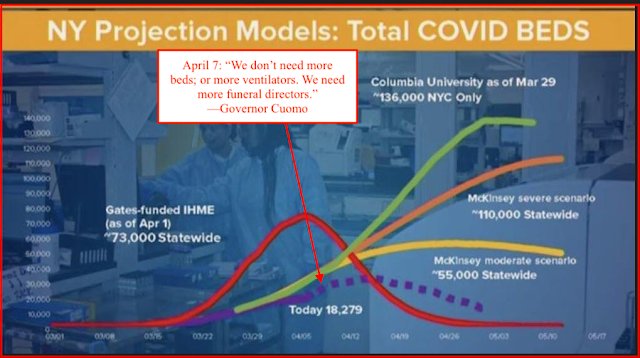 The professional forecasters all projected that beds would be a multiple of the beds actually needed.

Notice not one model came in under the actual number.

These are all professional fearmongers who alarmed the country about a virus that appears to be in line with a severe flu season.

Can they really be that incompetent?

Some may be but I called the evil Tony Fauci out a month ago on his phony projections: Why is Dr. Anthony Fauci, Director of the National Institute of Allergy and Infectious Diseases, Lying to Congress and the American People?

What have we learned?
Posted by Bruce Oksol at 12:00 PM No comments:

Sitting outside, on the lawn, under the trees, watching the robins, enjoying lox and cream cheese on a bagel, Keurig coffee, no wind, bright sunny morning, surfing, blogging, and reading Aristotle's Lagoon.

I won't post the top stories of the week until later today.

I'm playing "Monopoly" at our local grocery store. I have any number of instant winners for bagels or donuts. This a.m. I rode my bike next door to Tom Thumb (a regional grocery store), walked in with an instant winner, and walked out with my free bagel. Back home in a New York minute, toasted it, put lox and cream cheese on it and all in about fifteen minutes.

I can't even imagine being anywhere else right now if I had to drive or fly to get there.

On television last night, there was something called "Free Form." I had not seen that before. The feature movie was shown with limited commercial interruption. I like that better than TCM. On TCM there are no opportunities to fix a snack, etc. With "limited commercial interruption" it's the best of both worlds. The feature last night: "Back to the Future." The original. Why is watching something on television always seem better than watching the same thing on DVD?

I was blown away this morning when I realized it costs more to ship hand sanitizer than it costs to produce it. And there's now a glut of that also.


In biology, a test is the hard shell of some spherical marine animals, notably sea urchins and microorganisms such as testate foraminiferans, radiolarians, and testate amoebae.

The term is also applied to the covering of scale insects. The related Latin term testa is used for the hard seed coat of plant seeds.

As part of our curriculum, I am working with Sophia on the five main groups of animals (those with spines -- she says, "like spines on a book") -- she knows the five as: fish, birds, frogs (amphibians), turtles (reptiles) and people (mammals). I was quite impressed that she could recall the five groups.

When you get right down to it, among the amphibians, there are only three "groups": frogs, salamander, and caecelians. So, for her to say "frogs" instead of amphibians, good for her.

Same with reptiles: lizards, snakes, crocodiles/alligators, and turtles. That's about it. I'll probably have to spend a bit more time with her on reptiles -- that's a real grab bag of odds and ends.

I know the word for a turtle's shell: carapace, but I only learned recently that "carapace" only applies to that part of the shell we normally associate with the turtle, the top 90% of the shell.

Quick: the proper name for the bottom ninth of the turtle's shell?


Of course, between 2:00 p.m. and 7:30 p.m. weekdays she is over at her friend's house (something she would not be allowed to do if she lived in Detroit). By the way, her friend's mom wears a corona surgical mask even when in the house, though lately she has been wearing it less. 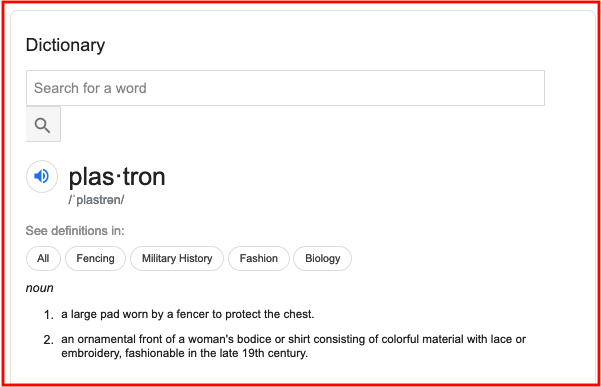 I assume I am the only iPhone user that did not know about "Voice Memos."

I discovered the app today; built into every iPhone; no need to download.

The app syncs across all Apple devices.

"Voice Memos" was hiding in the "Folder" icon on my iPhone SE "desktop." Along with the compass; "Find My"; and, "Contacts."
Posted by Bruce Oksol at 9:53 AM No comments: 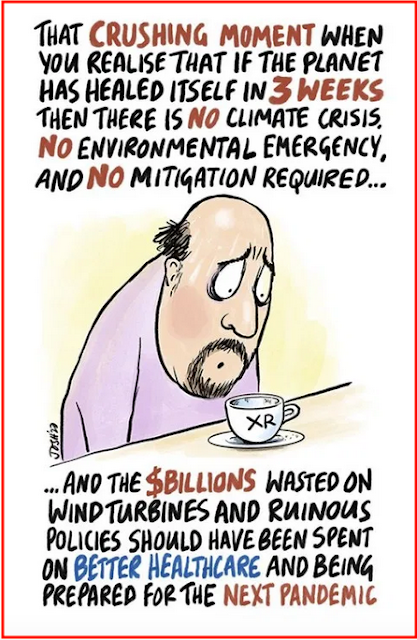 Does this mean St Greta won't be honored with a feast day when she passes away?

For St Greta, link here.
Posted by Bruce Oksol at 9:04 AM No comments:

The Epidemic That Mainstream Media Is Not Reporting -- April 11, 2020

Here it is, April, Easter, warm weather, the end of "cold and flu" season, and we have now have a second flu epidemic, one that the mainstream media is not reporting -- and think about this -- this epidemic is occurring even with the country in lock down. Imagine how bad things would be if we were "back to normal."

Most interesting, buried in this report is this note: despite we are now well above the threshold for a pneumonia / seasonal flu epidemic (see below), the CDC quietly announces this will be the final week of a full FluView report. That's one way to downplay an epidemic -- simply ignore it.

This is as bad as I've seen it the entire year.

From the linked site, the CDC:
Has anyone seen this addressed at any Coronovirus Task Force briefing:


Laboratory confirmed influenza-associated hospitalization rates for the U.S. population overall are higher than most recent seasons and rates for children 0-4 years and adults 18-49 years are the highest CDC has on record for these age groups, surpassing rates reported during the 2009 H1N1 pandemic. Hospitalization rates for school-aged children (5-17 years) are higher than any recent regular season but remain lower than rates experienced by this age group during the pandemic.

Despite the country on universal lock down?

And we have a vaccine for "seasonal flu," albeit one that is less than 45% effective.

This tells me all I need to know about the efficacy of untargeted quarantines.
Posted by Bruce Oksol at 8:57 AM 2 comments: