For those who like to play with numbers, this is kind of interesting, and kind of fun.

First, here's the link from which I'm operating, an interactive UND-EERC map at http://www.undeerc.org/bakken/dss/. The data apparently is current as of 2012 -- only six years old. LOL.

I then looked at two fields, the Charleson and the Antelope, two very good fields in the Bakken, and fairly underdeveloped back in 2012. 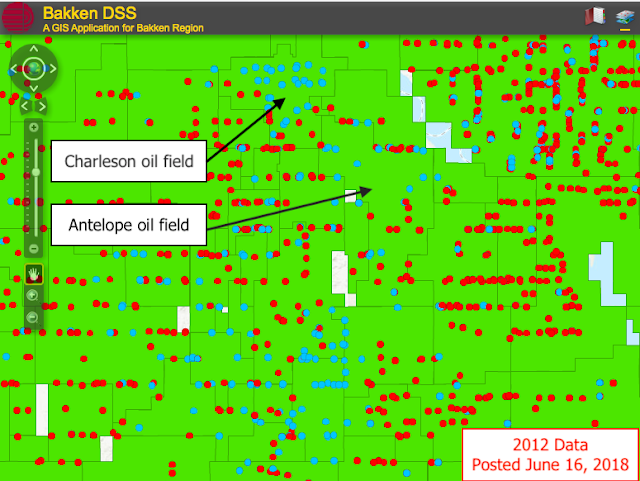 Original oil in place (OOIP) in each field (source of data not stated):
It appears that oil companies were recovering somewhere between 1% and 15% of the OOIP through primary production back in 2012. Early in the boom, 2007 - 2010, the estimate was probably 1 - 3% recovery through primary production. Later in the boom, by 2012 or so, it was publicly stated that primary recovery was about 7% but it might have been as high as 12%.

Some are opining that primary recovery might eventually get to 20% in the near term and some suggest as high as 50% in the long term. Don't quote me on any of this; it's just my perception and what I seem to recall. My "recall" is often very, very poor.

With regard to EURs, early in the boom, in this area, EURs were probably estimated at about 500,000 bbls. Since then, EURs have greatly increased.

But for argument's sake, we will suggest that EURs in this area were 500,000 bbls/well back in 2012. By the way, at this time, 2012, most of the wells in the Charleson were Three Forks well (blue in the graphic); in the Antelope, almost all of the wells were middle Bakken wells (red in the graphic).

So, let's run some numbers.

I think one can get any number one wants, but this is what I did.

Charleson:
Antelope:
Some observations:
Possibilities:
Disclaimer: whenever I do these back-of-the-envelope exercise I make amateur mistakes. But that's fine. That's how I learn -- if folks tell me where I'm wrong. But it gives me a starting point. Have fun doing your own calculations. It's an open book exercise.

Lynn Helms mentioned that flaring in the Bakken has gotten worse. Some of it is due to temporary "glitches," but mostly it is due to "over-production."

The Director, NDIC, mentioned that five new natural gas processing plants were under construction or in development stage, and one plant's expansion project should be completed by the end of the year (2018). 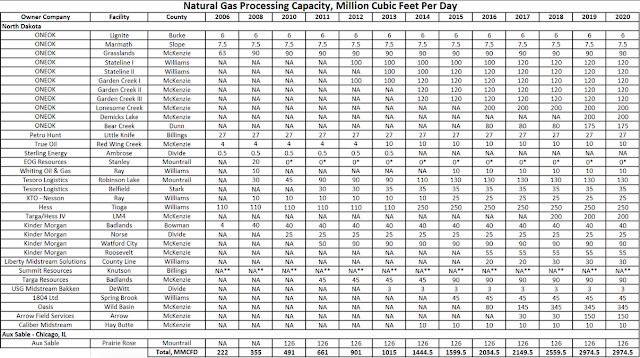 Email ThisBlogThis!Share to TwitterShare to FacebookShare to Pinterest
Labels: Natural_Gas_Plants_ND

June 16, 2018: the next USGS survey of the Bakken/Three Forks was scheduled for 2020. North Dakota congressional representatives successfully lobbied the USGS to begin the survey sooner. That was announced on December 11, 2017. This suggests to me that the USGS should begin the new survey not later than by the end of 2018. Let's hope.

Summary:
IP30: average daily oil production of a well in its peak production month. It's usually express in bopd. Oil includes condensate. The IP30 month follow the completion month with a lag of one to severl months -- so, the correlation between both numbers isn't perfect.

The official NDIC (North Dakota Industrial Commission) database lists 71 operators having drilled horizontal wells in North Dakota's Bakken. The table below shows average IP30 values and the associated number of wells for all active companies which had at least 40 IP30 wells since the beginning of 2014 and 10 wells with IP30 in 2016. They represent 97% of all horizontal wells. 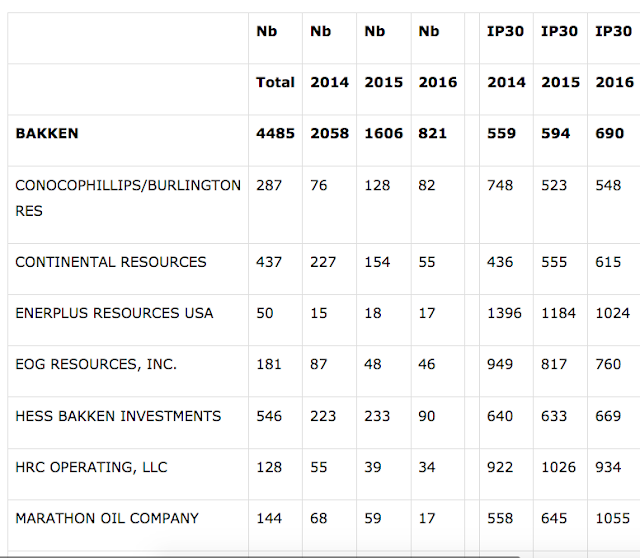 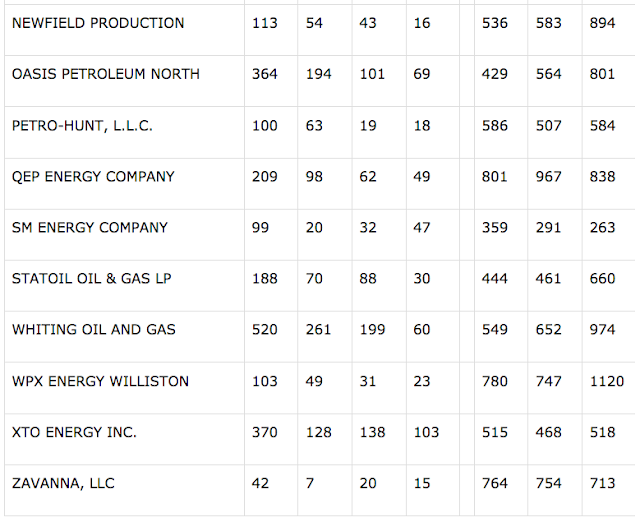 Do you remember this absurd BTU Analytics article? I'm not sure I ever posted the link; the article was simply too absurd. Or maybe I did post the link before but I can't find it now. Whatever. From the linked absurdity:

What do these shifts signal about the future of the Williston Basin?

By choosing to look for growth elsewhere, Oasis answered two related questions: how it plans to increase its inventory of ‘premium’ well locations as well as where the company views its best opportunity for low-cost production growth.

Because one of the largest Bakken pure plays chose this route, does it mean that Bakken upside is capped?

One concern mentioned by Bakken naysayers is that ‘premium’ inventory is running low, particularly compared to the opportunity set in other basins. BTU developed a new, well inventory model using the actual location of previously drilled wells, along with spacing, lateral and drainage assumptions to calculate remaining locations in each major shale basin, as featured in the most recent E&P Positioning Report.

Screenshots from the article: 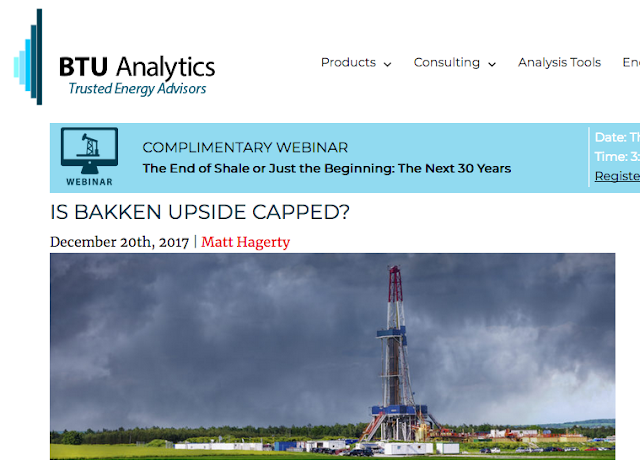 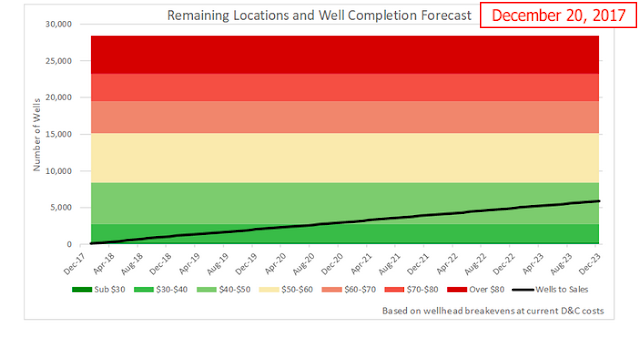 If one considers what happened between 2014 and 2016, both nationally and internationally, one can make a case that the DAPL may have saved the Bakken, no thanks to Standing Rock.


Almost without notice, an important anniversary came and passed recently.

On Friday, June 1, the Dakota Access Pipeline marked one year since the pipeline successfully began transporting Bakken crude from near Stanley, North Dakota to Patoka, Illinois.

How could we miss the anniversary for a pipeline that sparked intense protests and the world’s attention for nearly an entire year prior to operation?

The answer is relatively simple. Pipelines, despite the propaganda against them, offer relatively uneventful daily operations. They quietly move materials like crude, natural gas, water, CO2 and refined products across the United States with only rare  significant issues. In fact, 99.999 percent of petroleum products get to their destination without incident and the pipeline industry has proven its commitment to making that number even better with a decline in incidents of over 50 percent since 1999. 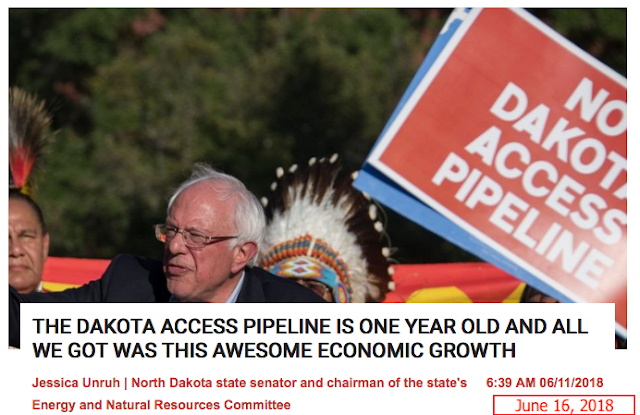 North Dakota oil production jumped 5.4 percent in April to more than 1.2 million barrels per day, coming in just shy of the state’s record.

And then this, link here: 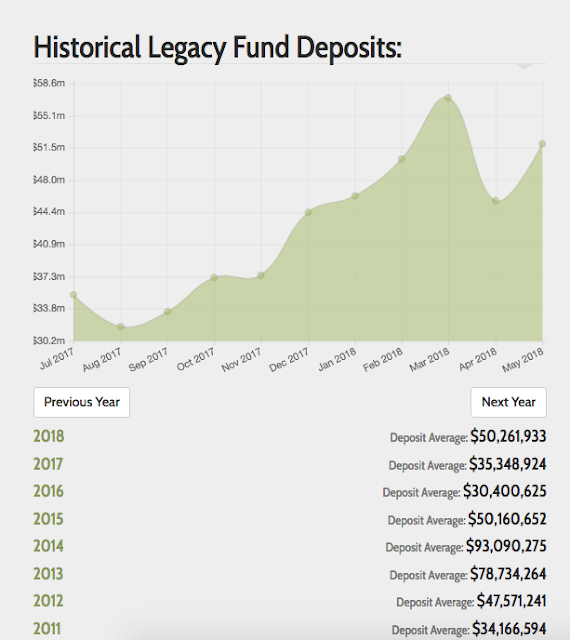 For more on the Legacy Fund, click on the "Legacy Fund" tag at the bottom of the blog.

The numbers speak for themselves. No comments necessary. For both oil and natural gas, the Bakken is beating the Permian. 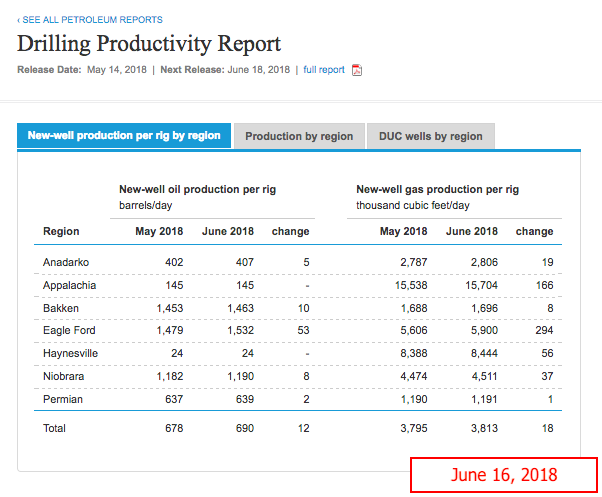