The note posted some time ago:
23278, production after the re-frack:

Posting the jump in production of the other three wells:

I was curious about this well because it's production jumped 6-fold, yes, another MRO well in the Bailey oil field:
Recent production:

So, what does its neighborhood look like? The graphic: 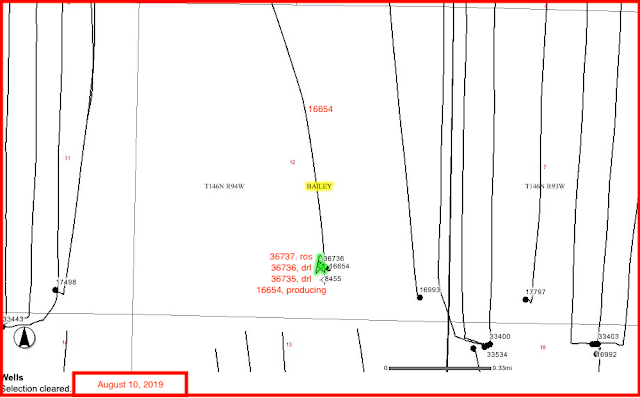 The wells of interest:

Guns, NRA, and the Second Amendment: there is such an incredibly great way to handle this issue. I would love to blog about it, but I'm not ready to wade into that quagmire. But there are some huge opportunities for Trump and/or his Democrat opponent, whoever that might be, to really propose a grand plan, ala "ObamaCare" and solve the problem at the federal level once and for all. It starts with going back to what the founders meant with regard to private ownership of guns: take the founders seriously but not literally.

Beautiful evening: poolside. Sun doesn't set for another hour but the shade of the trees has completely blocked it out.

Disneyland: update, August 9, 2019. I'll never see Disneyland again, nor will I ever see Disney World. I visited Disneyland more than a half dozen times; enjoyed every visit. During my last visits I would take my Wall Street Journal, find a place to have a cup of coffee on Main Street and pretty much stay settled until noonish. In the afternoon, do a few air-conditioned rides; a dinner; and, then watch the fireworks. I think the last time I went, one ride. Pirates of the Caribbean. Lots of great memories. Disney tickets are under-priced.

North Korea: it's too bad. The country lost its one opportunity. Will never get it again. The North Korean military, of course, doesn't see it that way.

So I was thrilled when I flipped open “Charcoal,” a new live-fire cookbook from Los Angeles chef Josiah Citrin, and found a recipe for “loaded” potatoes with crème fraîche, aged Gouda and herbs. Charred and crackling on the outside, tender at the center, they’re what Mr. Citrin calls his “fire-roasted take on the standard steakhouse potato”—and what I call the answer to my warm-weather baked potato cravings.

With a little attention to temperature control, just about any grill can do double duty as an outdoor “oven”—and save you from toiling in a sauna-like kitchen. And grilling potatoes is a largely hands-off affair: less time stooped over the grill, more time sipping rosé.

I called up Mr. Citrin for a few pointers, and he assured me there’s no need to get hung up on fussy details. Sure, at his restaurant, Charcoal, Mr. Citrin insists on oversize, 1-pound Yukon Gold potatoes for their creamy, subtle flavor.

But he said it’s perfectly fine to substitute russets. And while he buries whole potatoes, naked, in a bed of smoldering embers—an approach that produces a charred jacket and sweet, smoky flesh—less dramatic yet hardly less delicious results can be achieved by wrapping potatoes in aluminum foil and cooking them over indirect heat on an ordinary charcoal kettle or gas grill.

Finally, and reasonably enough, for perfectly even, tender, fluffable flesh, he suggests parboiling the potatoes ahead of time, briefly, in heavily salted water. “There’s about a million ways to approach grilled baked potatoes, and they’re almost all great,” he said.

FedEx split from Amazon: plenty of slack in the system. USPS needed this boost.

Steyer: can he get into the debates? You know things are going badly when "free chow" resulted in a crowd of only 25 people (half of them, I bet, were "journalists.") At least he had time to shake everybody's hand. Twice. Necessary to be in the debates: at least 130,000 unique donors and reach at least 2% in four approved national polls before ... August 28, 2019 -- to win a slot on the debate stage in Houston. Steyer is currently polling, through August 6:
Best comment at the Steyer article:


I would like him to talk about a political system where outrageous sums of money are poured into election campaigns.

Six months until the first primary. Six months in Iowa. Wow, get a life. If I were a billionaire, I would spend it anywhere but in Iowa. And my mom is from Iowa so I feel I can say that.


Our Town, Iris DeMent
Posted by Bruce Oksol at 7:36 PM No comments:


And my kind of related question, if I may, is -- and I don't meant to sound petulant in any way, but what is the value of Continental being a public company?


Okay, I'll take that, Doug. First of all, on CAPEX, we've -- by releasing seven rigs we certainly expect that CAPEX in second-half of the year is normally much slower. And John went through the quarter-by-quarter rundown. So will we be spot on with the [$2.6 billion]. I think we're going to be really close, and we certainly have capability here to adjust on the fly as we go forward.

Comment: this might be as good a time as any to reiterate the purpose of the blog. This is not an investment site.

The "welcome/disclaimer" site is incredibly long but taken as a whole should give folks an idea what the blog is all about.


This is a blog, short for "web log," or diary.  It was started for my use only since HTML provided a great way to track the Bakken boom. I decided to open it to the public for various reasons which I discuss elsewhere [the short answer: others reading the blog and responding have taught me a lot about the Bakken].

I will make mistakes, and I have made some doozies. Most of the mistakes could have been avoided had I posted more slowly, and had the posts been reviewed by an expert in the oil and gas industry. If something looks wrong, it probably is. If a [material] mistake is brought to my attention, I will address it immediately. If I ever get the feeling that my posts on the Bakken are doing more harm than good, I will bring down the site. It is not my intention to mislead anyone on the Bakken. 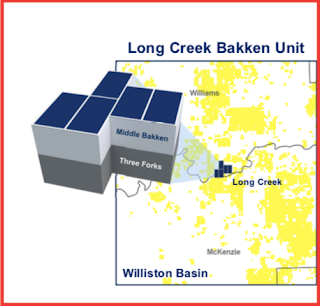 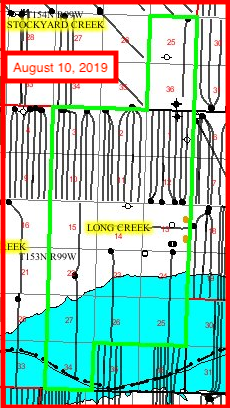 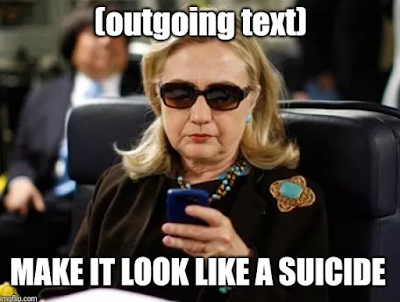 The CLR Alfsvaag Wells In CMC 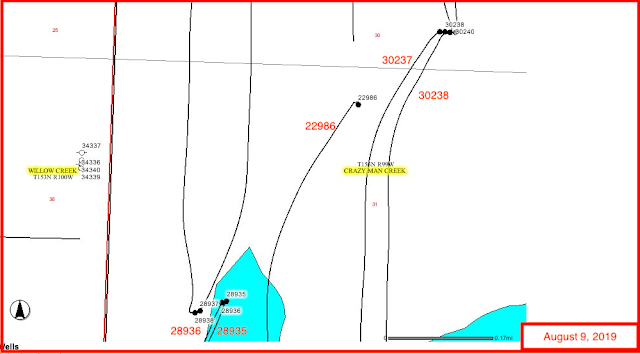 The wells (multiple pads; some run north; some run south):
At time of original post: