From the file reports.

US crude oil, days of supply: link here. The supply continues to shrink, at least measured in number of days. We're now down to 38.8 days. LOL. Divide by seven days, about six weeks of supply. Two weeks of supply is cutting it close; one doesn't want to see that. About perfect is three weeks, or 21 days. Anything over four weeks (28 days) is "ludicrous," as Elon Musk would say. So, yes, six weeks of supply is ludicrous.

Taking a page out of Apple's marketing strategy:

Talk about a disconnect between Wall Street and Main Street. A few days ago, Apple (AAPL) would have also been in the headline: 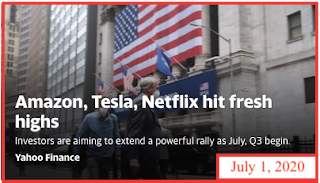 The "thing" that will drive this recovery, or keep it going: professional sports. The faster professional sports gets back to televising live events (with or without fans, it doesn't matter), the faster Americans will get the feeling that things are getting better. So much of this is perception.

Déjà vu all over again. Didn't we just see this exact same thing a few months ago? I remember blogging about it, using this as an example why I do not use iCloud. 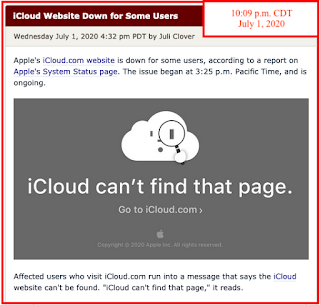 From the very beginning of the blog, more than ten years ago, I have been consistent with at least one data point: I have always maintained that if I were allowed to choose only one metric to gauge the American economy -- where it's been, how it’s doing, where it seems to be headed, etc., -- that one metric would be gasoline demand. At least one reader said "diesel" would be a better indicator. Be that as it may: I feel very strongly that if allowed only one metric for the subject at hand, it would be gasoline demand.

Before I go on, look at gasoline demand posted today. Be sure to read the comments. Link here. 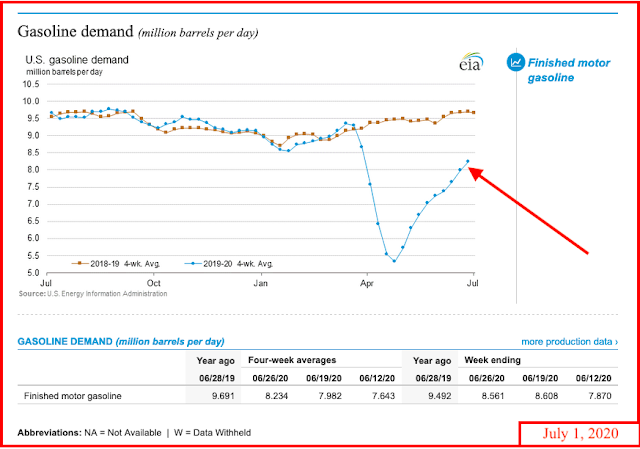 But several big states are now seeing a new surge in corona virus cases ... and that could change everything.

It's literally a week-by-week gut check.

Push and push back.

The politicians -- the governors -- will be pushed to "react" to the surge in corona cases.

But the American public is tired of the lock down. And frankly, the percentage of those Americans that won't survive economically increases each week this goes on.

My hunch: the American public will accept almost anything short of another lock down. Social distancing and masks? That's fine. But outright shutting down things again is going to be a very, very hard sell.

Back to gasoline demand.

One would think that the rate of growth in demand (the slope of the line) will now start to slow down a bit.

If the rate of growth actually increases going forward -- a steeper slope, it will speak volumes about the resiliency of the American economy.

If the rate of growth slows appreciably for more than a few weeks, that's going to be very, very concerning.

On another note, there is a real, real disconnect between Wall Street and Main Street.

Posted by Bruce Oksol at 9:49 PM No comments:


No new permits. No reports other than the previously reported wells that came off the confidential list today.
Posted by Bruce Oksol at 5:33 PM No comments:


The North Dakota Supreme Court has sided with state regulators in a challenge to a proposed oil refinery near Theodore Roosevelt National Park in the western part of the state.

In a unanimous opinion, the state’s high court upheld a lower court ruling that affirmed permitting decisions by the Department of Environmental Quality.

The Bismarck Tribune reported Tuesday that the state Supreme Court ruled that the department “did not act arbitrarily, capriciously, or unreasonably in issuing the permit.”
William Prentice, the CEO of Meridian Energy Group, called the ruling “very welcome.”

In case you missed it, the ruling was unanimous.


On another note, that poll at the sidebar on the right -- which pharmaceutical company would get the government nod -- appears to be a bust. It was posted about three weeks ago when there were reports that the federal government would pick one of five leading pharmaceutical companies to take on the US corona virus vaccine program -- but to date, nothing. So the poll comes down. I've lost interest.

TCM: "Government Girl." Wouldn't have posted a note about this show, but it appears Ed Norton channeled Sonny Tufts when Ed Norton spoke about "love" in "Birdman." Amazing.
The "government girl": Olivia de Havilland. This clip from "Birdman":