Reminder: this from the NDIC dockets -- the 2560-acre drilling unit mentioned in case # 25459 is shown in the screenshot farther down --

See this earlier post regarding the Kennedy-Miles wells. That is the post where I track these wells. The original permits were on 2560-acre spacing.

On December 20, 2016, NDIC releases permits for eight more Kennedy-Miles wells. These new permits show that these eight new Kennedy-Miles wells are on 2560-acre spacing units, a stand-up 2560-acre drilling unit: sections 30 and 31 to the north; and, sections 6 and 7 to the south. They are all long laterals (two sections, ~ two miles long); the pad will be in the middle of the unit (vertically) with the Kennedy wells running north (sections 31 and 30) and the Miles wells will run south (sections 6 and 7).

These are the eight new permits. One can see the symmetry. They will be lined up east-to-west, in the SWSE quadrant of section 31, about 250 feet from the south line. Most likely "H" wells are middle Bakken wells; H1 are Three Forks, first bench wells; and H2 are Three Forks, second bench wells: 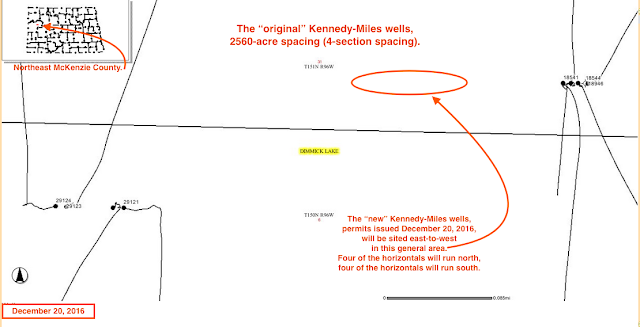 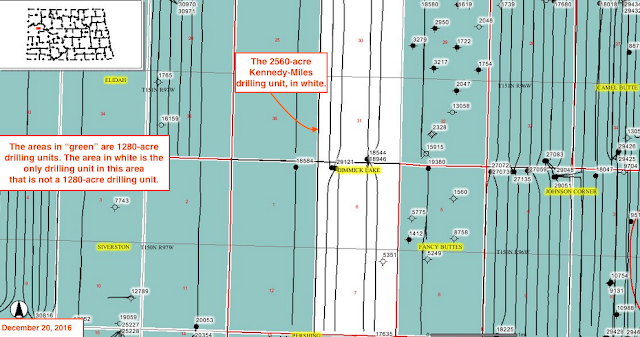 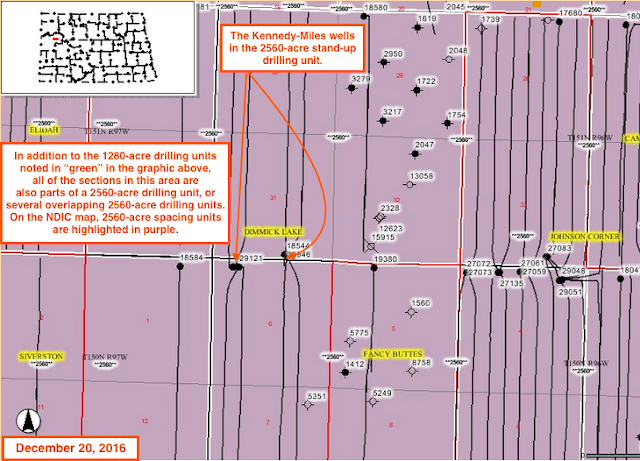 Today, Amazon announced three new fulfillment centers, each up to a thousand new employees. Two in Illinois, one in Michigan.

We've been talking about this terminal for quite some time. One can google the Freeport LPG terminal at the blog for more information.

See poll at sidebar at the right asking whether we will see "the market" hit 20,000 by the end of the week.

That was easy. But what was that all about? China "steals" US asset on the "high seas." US shows intense displeasure; Trump joins in. Within a couple of days, China says it will return the submersible drone; within a week the drone will be returned. Hmmm....

Note: there is picture and a caption of one of the kings from the set of chessmen that Nancy Brown describes in another of her books, page 145, Song of the Vikings: Snorri and the Making of Norse Myths, Nancy Marie Brown, c. 2012. I ordered this book sight unseen from Amazon.com after reading her book on the "ivory Vikings."

Now, back to the "ivory Vikings":

It's been more fun than I expected, so let's look at another chapter. This time ... the knights.

References the Bayeux Tapestry which I know well; outlined a book on this subject some years ago.

Discusses the very small size of horses in the Middle Ages. Very small horses, the size of ponies.

The Age of Chivalry (named from the French for horse, cheval). That I did not know; something new. Lewis knights: shields were kite-shaped; similar shaped noted to be carried by Norman conquerors in the Bayeux Tapestry.

The shields, then, date the Lewis chessmen to between 1150 and the early 1200s (consistent with dating based on other pieces).

One odd Lewis knight wears a carinated, flat-topped kettle-hat. It reminds one researcher of an illustration from the Book of Saul in the Crusader Bible, made in Paris between 1245 and 1255.

These same researchers feel the Lewis chessmen must have been carved in a town like Trondheim -- where the carver would have seen a king's retinue. But, in reality, the knights don't help us identify where the chessmen were carved.

Author discusses the discovery of the Lewis chessmen.

James Murray founded the Oxford English Dictionary. His son Harold, H. J. R. Murray wrote the definitive history of chess - it took him 16 years: A History of Chess. Fittingly, a Lewis knight is embossed on the cover.

British Museum has grown to be a forceful backer of the Norwegian theory.

Still exploring the theory that Margret's ivory workshop is under the Skalholt church in Iceland. Margret of Adroit.
Posted by Bruce Oksol at 7:53 AM No comments:

Later, 8:01 a.m. Central Time: see first comment regarding commingling at this post. That comment has nothing to do with what is being asked here, but it does involve commingling.


Original Post
In the NDIC hearing dockets for December, 2016, case # 25480 concerned a request to commingle oil and natural gas produced from the wells listed below. I count 41 wells (and eventually, I assume, there will be more):
Question: "where" does this commingling take place? My initial thought was that there would be a mini-Cushing storage complex in this area -- which, by the way, is north of the river, almost exactly 50 miles due east of the proposed site for the new Williston airport.

As I was saying, my initial thought was a request for commingling for 40+ (and more to follow) meant a mini-Cushing-like storage complex. But thinking about that for a moment, that doesn't seem as efficient as using pipelines to take oil directly from the wellhead to a regional pipeline gathering system.

The question for anyone familiar with the area or with the commingling case: are we looking at a mini-Cushing-storage-like complex or something "more virtual": trucks and / or pipelines moving crude oil from individual pads to a more central location but not requiring separate storage tanks for each well?

Bakken 2.0: the landscape in northeast McKenzie County will be unrecognizable in 2022 compared to what it was in 2007. It's hard to believe 2022 is the 15th year from the beginning of the Bakken boom in North Dakota. A child born in the early years of the Bakken boom could be holding a summer job in the oil fields by 2022. It boggles the mind.

By the way, for California readers, the entire Bakken activity in North Dakota could "fit" in the geographic footprint of the Los Angeles metropolitan area.

As mentioned above: from Williston to the EN-Hermanson wells, it is 50 miles as the bald eagle flies. In southern California, it's about 50 miles from LAX to Riverside, CA, as the California condor flies.
Posted by Bruce Oksol at 7:19 AM No comments:

Later, 9:58 a.m. Central Time: Earlier this morning I posted a short note on 1P, 2P, and 3P (original post below). This whole business of measuring proved, probable, and possible reserves is very, very interesting. Scientists, economists, businessmen all look at this issue differently.

So, for whatever reason, I happened to post a note about that this morning, for no reason except that the spirit moved me.

Then, out of the blue, via Twitter, EIA posts an update on US Crude Oil and Natural Gas Proved Reserves, Year-end 2015.  It's a long, long report, but lots of great graphs. 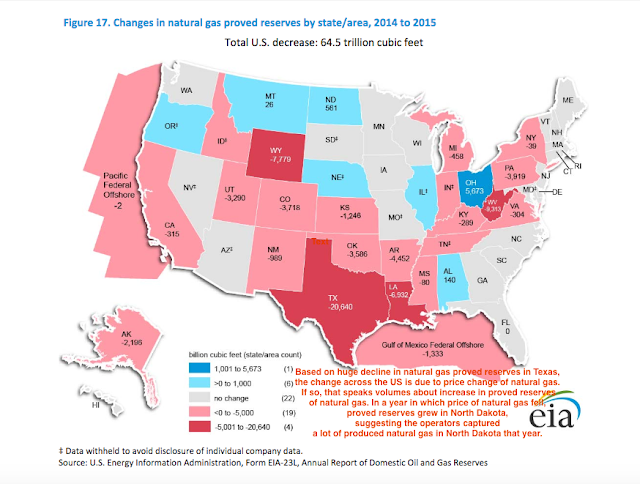 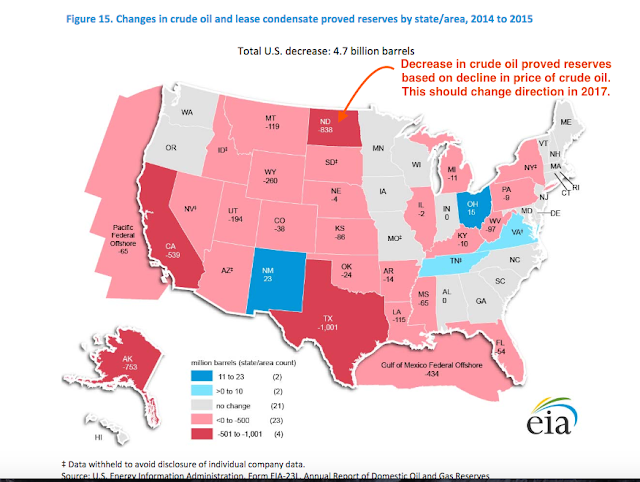 Had it not been for the blog and my readers, I never would have understood the concept of proved (PD, and PUD), probable, and possible crude oil reserves. 1P, 2P, and 3P.  Matt Damon will soon add a fourth category: 4P -- crude oil reserves on Mars and other extraterrestrial bodies.

I think the issue of crude oil reserves will be an interesting story to follow now that Trump will be the new president.

The Securities and Exchange Commission (the SEC) is a huge piece of this story.

The SEC is made up of five commissioners. It is "supposed" to be non-partisan -- but everything in Washington is partisan -- including the CIA -- contrary to what "everyone in the media" says -- but I digress.

The SEC is made up of five commissioners. It is "supposed" to be non-partisan; no more than three commissioners may belong to the same political party. 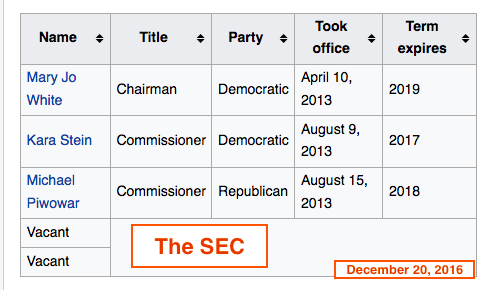 For investors, this table is as important as the current Supreme Court bench is to the ACLU.

The designation / concept / definition of "Republican" and "Democratic" is incredibly blurred. In 2017, President Obama will likely appoint two "Republicans" to the SEC and one "Democrat." I can come up with any number of "Democrats" that think like Trump when it comes to the economy and Wall Street.

From Fortune: the SEC is investigating Exxon over asset valuations, September 21, 2016.

I side with ExxonMobil on this issue.
Posted by Bruce Oksol at 6:29 AM No comments:

Over at "The Big Stories" I've added a new block: The Trump Years. One of the big stories coming out of the Trump years is likely to be "Investment In America." We'll see.

But there seems to be some major tectonic changes that may be "favoring" the United States. Again, we'll see.

China: some years ago, "everyone" thought the Chinese were going to "take over" America. China had lots of cash and were seen to buying up lots of US energy assets. Right now, China is in significant economic difficulty. Trump's focus on bringing manufacturing jobs back to America could put more pressure on China. Rising Fed rates are said to make things more difficult for China. Energy: China's oil production is declining.

Japan: stagnant economy for as long as I can remember. SoftBank comes along; commits to investment in the US. One has to ask why?

The Mideast: huge changes. Saudi Arabia in an existential panic. Iran rising. Iraq? Who knows? But Kurdistan, the Sunni Caliphate, Iraq, Turkey, Russia, Syria, northern Iran all in one cauldron. Obama created the vacuum. Trump says he doesn't want to get involved. We'll see. But if the US doesn't get involved, Russia fills the vacuum and becomes the BMOC. It appears that the princes in Saudi Arabia have to look outside the kingdom for investment opportunities to offset the new reality.

The EU and Brexit: big investors out of Japan, Mexico (Slim), US, Mideast -- where would they look to invest? EU and Brexit puts the UK and Europe in huge uncertain flux. And that's on top of the fact that Europe is likely to be the only continent in the world to depend on imported energy.

When I put all this together: entrepreneurial spirit; financial capital; technology; stability; the challenges in Europe, China, and the Mideast, one can only think that this is an incredible point in America's history ... and then we have a huge change in political direction and/or political focus.

All this leads to the first sub-section under the Trump years over at the big stories: investment in America.

Lead story over on MSNBC: "faithless" defectors -- Hillary takes "bigger" hit than Trump. In 1808, the previous record, when six (6) New York state electors switched their votes from Madison. This year, that record was broken, with seven (7) electors going rogue, and except for state laws, the number would have been at least ten (10) -- two Trump electors; eight Hillary electors. For Trump, 2 / 306; Hillary, 8 / 232.

MSNBC focus: following the "faithless" electors story, I felt like I was listening to a Rush Limbaugh segment with the port-mortem on the Hillary campaign. The theme: time for the Clintons to get off the stage.

Dinner. Trump had dinner with Slim last night.  Trump must simply be in "seventh heaven." Like Ronald Reagan, he will turn over foreign affairs to those around him. By the way, has he gone golfing yet, since the election? I know that the current president phoned in his condolences to Germany from the golf course. At least that's what I heard reported.


RBN Energy: update on MPLX and the nation's largest MLPs.


MPLX LP was formed in 2012 by Marathon Petroleum Corp . In 2015, MPLX acquired MarkWest Energy Partners for $14.7 billion, a move that in one fell swoop made the merged entity the fourth-largest MLP in the US.

In October, 2016, Marathon announced an aggressive "dropdown" strategy that will provide MPLX with additional assets that will generate about $1.4 billion in annual earnings by the end of 2019. MPLX also has a significant capital investment program that allocates $2.3 - $2.8 billion to build out gathering and processing infrastructure, logistics, and storage facilites in Appalachia and Texas.

RBN Energy continues its review of the nation's largest MLPs.