Not much time for international press Q&A: 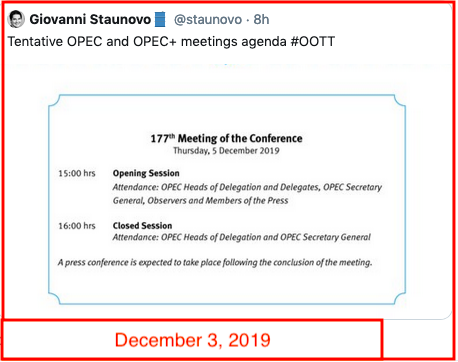 Size:
Spacing:
There are currently 294 wells in the Antelope oil field.

At the sidebar at the right, "The Big Stories."  I have not been updating the pages as well as I should but it is interesting how relevant those pages remain. I started the list back in 2013, and periodically update it.

Going through that list, these jump out at me:

Midland, TX Is Now The Richest Metropolitan Area In The US Based On Per Capita Income -- US Census Bureau Data -- December 3, 2019

Note: in a long note like this, there will be factual and typographical errors. If this is important to you, go to the source.

At the link at the right, two links that every reader should check out occasionally:
The third magazine, The Bakken Magazine, does not download; it may no longer exist. But I digress.

From The Oilman Magazine link below: 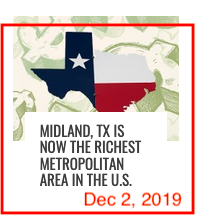 From the current issue of The Oilman Magazine, dated December 3, 2019, "Midland, TX, is now the richest metropolitan area in the US." The date of the article is obviously wrong (a "cut and paste" error, probably) because the link takes one to a 2019 story tracking US income data from 2016 to 2018. The link to that story: https://oilmanmagazine.com/midland-tx-is-now-the-richest-metropolitan-area-in-the-u-s/.


According the data released by the U.S. Bureau of Economic Analysis Midland, TX ended the Bridgeport, CT metro area’s reign as the area with the highest per capita income. Take that yankees!

The two counties that make up the Midland metro area had a per capita income of $83,049 compared to the second-place $81,068 for the Bridgeport metro area that includes Norwalk, Stamford, Greenwich and Danbury.

The change at the top is the story of two counties, figures show. Midland is heavily dependent on mining, which includes oil and gas, economist David Lenze said. Fairfield County, meanwhile, has an economy centered on the financial services industry.

While there was an $800 million increase in one of the two counties that make up Midland’s statistical area, there was a nearly-corresponding $798 million drop in the financial services industry in Fairfield County, said Lenze, who works at the U.S. Bureau of Economic Analysis.

The source for income data: http://www.bea.gov/newsreleases/regional/lapi/lapi_newsrelease.htm.

Most remarkable about the top ten: look at the delta between the top two and the rest. Then consider this: there is not state income tax for the metropolitan area that is ranked #1. Multiply that $1 per capita income by 1.09 and Midland goes to $133,249.

Then, go one step further. As expensive as it has gotten to live in Midland, it still pales in comparison to the cost of living in those cities ranked #2 to #7. Using a 20% fudge factor (which is very, very conservative), Midland easily goes to $160,000 per annum.

Other metropolitan areas of interest:

A while back I posted this note, how the global warming myth and "the flood myth" come together. It explains why global warming is so easily accepted by the gullible, the superstitious, the misinformed.


The "flood myth" has been around since "Genesis" (the Bible); every culture, every generation has feared the "flood"; now in the 21st century, we have "rising seas" and more flooding

In the King James Bible, we had the Old Testament and the flood; in the New Testament we had the Messiah. It was the Gospel

Up until now, with regard to the Bible of Global Warming, we've had the old testament, but not the "Good News." The Gospel. The "good news." In a secular setting, the gospel  is an idea or rule that's accepted as undoubtedly true. The science is settled.

We now have the Good News. That missing piece has been found.

It's St Greta. She's a bit late -- about nineteen years to be exact. The Messiah was to have returned at the turn of the millennium -- but nineteen years ain't bad when we talking 2,000 years. And to think her twelve disciples are already in place, to include Occasional Cortex, Neil deGrasse Tyson, and Bill Nye, the "Science Guy."

The New Jerusalem is Stockholm, as in Sweden.


Greta Thunberg is being taught to Swedish children as part of a course about “religious knowledge,” with kids being asked to mock her opponents.

The 16-year-old climate activist is now included in the school curriculum and is being portrayed in an overtly sympathetic light, with the course describing her as an “alarm clock” that “allows us to discuss, talk, and reflect on what is happening to our world.”

According to one student, “Greta is practically painted as a saint.”

“In one task, they are asked to find a picture to illustrate the sentence “One simply doesn’t mess with Greta,” a nod to an outdated Boromir meme from “Lord of the Rings.”

Including Greta in lessons is “important to constantly offer materials and teaching materials that reflect the contemporary.”


Churches in Sweden are now ringing bells in her honor, while last year the Church of Sweden proclaimed Greta to be “Jesus’s Successor.”

As noted, I cannot make this stuff up.
Posted by Bruce Oksol at 9:23 AM No comments:

And Here's The Problem With Tethered Vehicles -- December 3, 2019

EVs. After our cross-Texas trip over Thanksgiving I was again struggling to see how EVs were going to become "a thing." It's just not gonna happen. At least not in the US.
It didn't take long. The day after posting the above, this article, photo, and video pop up. Here's a great example of what I'm talking about -- waiting to charge one's Tesla. 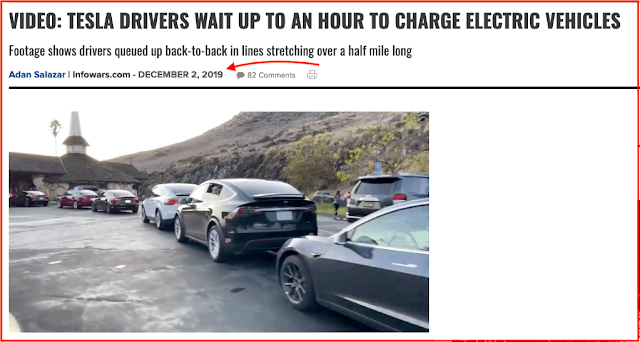 From the article at the link.


Tesla owners in California waited in long lines to charge their electric vehicles over the holiday weekend.

Footage out of Kettleman City, the location of one of the largest supercharging sites boasting up to 40 chargers, shows drivers queued up back-to-back in a line about a half mile long.

Testy drivers attempting to juice up after Black Friday sounded off on social media, claiming the wait time was anywhere from thirty minutes to well over an hour.

Another Tesla owner claimed he ran into long lines at a charging station in Buellton.

One reader had a solution:


Load a large diesel generator on a trailer and charge these idiots big bucks to charge their cars in line.

A better solution: Teslas -- especially the new pickups -- could tow their own diesel generator on a small U-Haul trailer.
Posted by Bruce Oksol at 8:03 AM 2 comments:

Perhaps They Could Have Used Different Graphs? -- December 3, 2019

Am I missing something here?  From The WSJ.

Here is the narrative:


U.S. teenagers made no significant gains on an exam taken by students around the world, and continue to trail students in Asian countries. The exam, called the Program for International Student Assessment, or PISA.

“The scores are flat. We’re struggling in math in comparison to our peers around the world,” said Peggy G. Carr, the associate commissioner of assessments for the National Center for Education Statistics. “We’re sliding with regard to our most struggling readers.”

Here are the graphs: 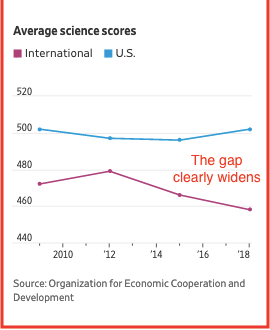 Only One Well Coming Off The Confidential List Today -- Tuesday, December 3, 2019

RBN Energy: Is the market ready for 100-Bcf/d US natural gas production?


The once unthinkable level of 100 Bcf/d for U.S. natural gas production is just around the corner, it would seem.

Lower-48 gas production last week hit a new high of 96.4 Bcf/d, after surpassing 95 Bcf/d not too long ago (in late October). That’s remarkable considering that production was only 52 Bcf/d just 12 years ago.

Gas demand from domestic consumption and exports this year has set plenty of records of its own, but the incremental demand has not been nearly enough to keep the storage inventory from building a significant surplus compared with last year. CME/NYMEX Henry Hub prompt gas futures prices tumbled nearly 40 cents last week to $2.28/MMBtu, the lowest November-traded settle since 2015. Today, we break down the supply-demand fundamentals behind this year’s bearish storage and price reality.